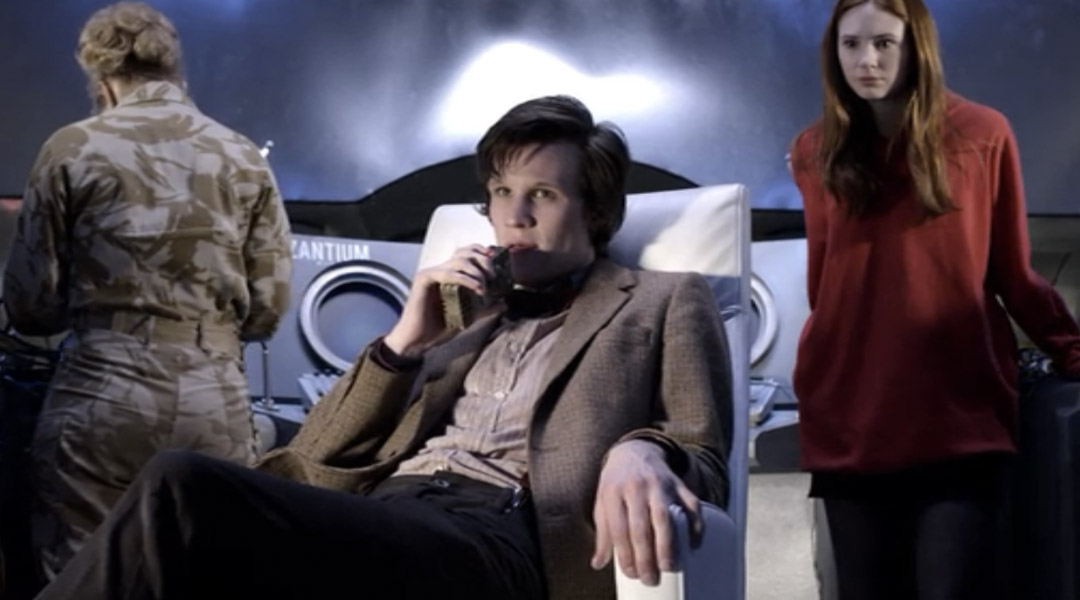 Amy: Where are we?
River: Exactly where we were.
Amy: No we’re not.
The Doctor: Move your feet.
Amy: Doctor, what am I looking at? Explain.
The Doctor: Oh c’mon, Amy. Think! The ship crashed with the power still on, yeah? So what else is still on? The artificial gravity. One good jump and up we fell. Shot out the grav globe to give us an updraft and here we are!

Octavian (Iain Glen): The Angels, presumably they can jump up too.
The Doctor: They’re here. Now. In the dark we’re finished. {The corridor starts to close off}. Run!
Octavian: This whole place is a death trap!
The Doctor: No, it’s a time bomb. Well it’s a death trap and a time bomb. And now it’s a dead end. Nobody panic. Oh. Just me then.

The Doctor: The security protocols are still online and there’s no way to override them. It’s impossible.
River: How impossible?
The Doctor: Two minutes.

Angel Bob (David Atkins): The Angels are feasting sir. Soon we’ll be able to absorb enough power to consume this vessel, this world and all the stars and worlds beyond.
The Doctor: Well, we’ve got comfy chairs, did I mention?
Angel Bob: We have no need of comfy chairs.
The Doctor to Amy: I made him say “comfy chairs”.

The Doctor: So what are you? {checks the crack} Oh, that’s bad. That’s extremely very not good.

The Doctor to himself: Do. Not. Blink.

The Doctor: Why am I not dead then? {the Angels are focused on the crack} Good and not so good. Oh this is new and a little bit good. I mean, is that it? Is that the power that brought you here? That’s pure time energy, you can’t feed on that. That’s not power, that’s the fire at the end of the Universe. And I’ll tell you something else—cut to him running off—never let me talk.

River: Father Octavian, when the Doctor’s in the room, your one and only mission is to keep him alive long enough to get everyone else home. And trust me, it’s not easy. Now if he’s dead back there, I’ll never forgive myself. And if he’s alive, I’ll never forgive him. And Doctor, you’re standing right behind me aren’t you?
The Doctor: Yeah.
River: I hate you.
The Doctor: You don’t.

The Doctor: Amy, listen to me. If you open your eyes now for more than a second you will die. The Angel is still inside you. We haven’t stopped it, we’ve just sort of… paused it. You’ve used up your countdown. You can not open your eyes.

Amy: Doctor, please, can’t I come with you?
Octavian: You’d slow us down, Miss Pond.
Amy: Don’t wanna sound selfish, but you’d really speed me up.

The Doctor: Amy. You need to start trusting me. It’s never been more important.
Amy: But you don’t always tell me the truth.
The Doctor: If I always told you the truth I wouldn’t need you to trust me.
Amy: Doctor, the crack in my wall. How can it be here?
The Doctor: I don’t know yet but I’m working it out.

The Doctor: Now. Listen. Remember what I told you when you were seven.
Amy: What did you tell me?
The Doctor: No. See that’s the whole point. You have to remember. {he kisses her forehead}

The Doctor: Cracks, cracks in time. Time running out. No, couldn’t be. But how is a duck pond a duck pond if there aren’t any ducks. And she didn’t recognize the Daleks. Okay, time can shift. Time can be rewritten. But how? Oh.

The Doctor: Time can be unwritten.

Amy: What is that light?
The Doctor: Time running out.

River: What’s that?
The Doctor: The Angels running from the fire. They came here to feed on the time energy, now it’s going to feed on them.

The Doctor: You’re going to have to walk like you can see.

The Doctor: River Song, I could bloody kiss you!
River: Oh well. Maybe when you’re older.

Bob: Sir, the Angels need you to sacrifice yourself now.
The Doctor: Thing is, Bob. The Angels are draining all the power from this ship, every last bit of it. And you know what? I think they’ve forgotten where they’re standing. I think they’ve forgotten the gravity of the situation. Or to put it another way, Angels—
River to Amy: You hold on tight and don’t you let go for anything.
The Doctor: —Night night.

Amy: And the crack, is that gone too?
The Doctor: Yeah. For now. But the explosion that caused it is… still happening. Somewhere out there. Somewhere in time.

River: You. Me. Handcuffs. Must it always end this way?
The Doctor: What now?
River: The prison ship’s in orbit. They’ll beam me up any second. I might have done enough to earn a pardon this time. We’ll see.
The Doctor: Octavian said you killed a man.
River: Yes, I did.
The Doctor: A good man.
River: A very good man. The best man I’ve ever known.
The Doctor: Who?
River: Hm. It’s a long story, Doctor. Can’t be told. Has to be lived. No sneak previews. Well. Except for this one. You’ll see me again quite soon. When the Pandorica opens.
The Doctor: The Pandorica. Ha! That’s a fairy tale.
River laughing. Ah, Doctor. Aren’t we all? I’ll see you there.
The Doctor: I look forward to it.
River: I remember it well.

The Doctor: Can I trust you, River Song?
River: If you like. But where’s the fun in that?

Amy: I wanna go home.
The Doctor: Okay.
Amy: No, not like that. I just want to show you something. You’re running from River. I’m running too.

The Doctor: Amy, listen to me. I am 907 years old. Do you understand what that means?
Amy: It’s been awhile?

The Doctor: But you’re human. You’re Amy. You’re getting married in the morning. In the morning…
Amy: Doctor?
The Doctor: It’s you. It’s all about you. Everything. It’s about you.
Amy: Hold that thought.
The Doctor: Amy Pond. Mad, impossible Amy Pond. I don’t know why — I have no idea—but quite possibly the single most important thing in the history of the universe is that I get you sorted out right now.