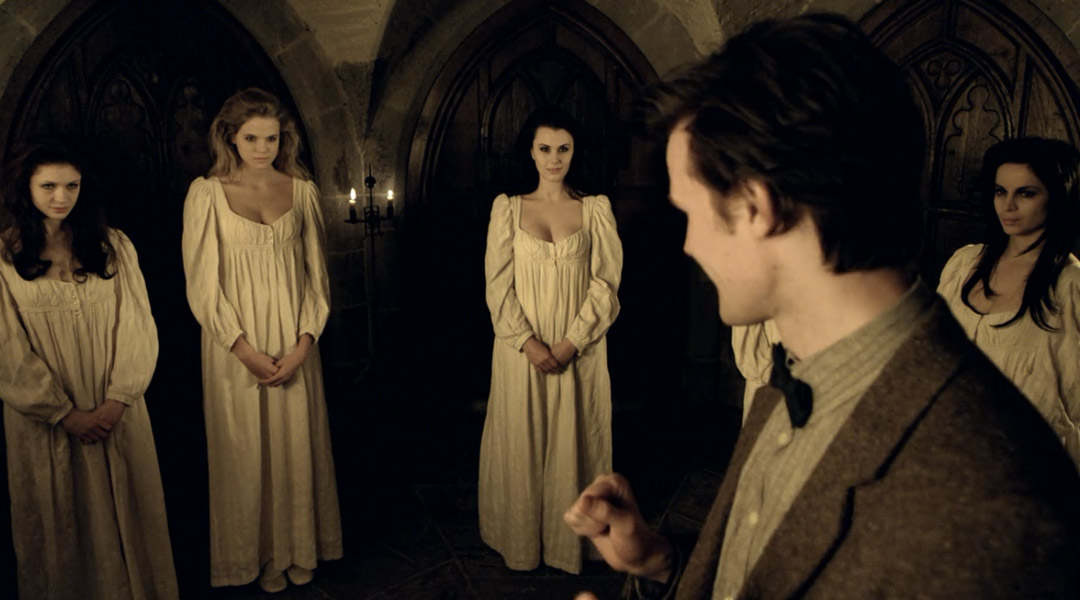 Guido (Lucian Msamati) about his daughter: Signora, she is my world.
Signora Rosanna Calvierri (Helen McCrory): Then we will take your world.

Rory leaving a message: Hey! It’s me. Hello! How are you? Um, the reason for this call is because I haven’t told you for seven hours that I love you, which is a scandal! An even if we weren’t getting married tomorrow I’d ask you to marry me anyway. Yes I would! Because you are smashing.

The Doctor: Rory! That’s a relief. Thought I’d burst out of the wrong cake. Again. That reminds me, there’s a girl standing outside in a bikini. Could somebody let her in and give her a jumper? Lucy. Lovely girl. {whispering} Diabetic. Now then. Rory. We need to talk about your fiancée. She tried to kiss me. Tell you what though, you’re a lucky man. She’s a great kisser. {silence} Funny how you can say something in your head and it sounds fine.

The Doctor: The life out there, it dazzles. I mean, it blinds you to the things that are important. I’ve seen it devour relationships entirely. {the TARDIS sparks} It’s meant to do that. Because for one person to have seen all that, to have tasted the glory, and then go back. It will tear you apart. So! I’m sending you somewhere. Together.
Amy: What, like a date?
The Doctor: Anywhere you want. Any time you want. One condition: it has to be amazing. The Moulin Rouge in 1890. The first Olympic games. Think of it as a wedding present because frankly, it’s either this or tokens. It’s a lot to take in, isn’t it? Tiny box, huge room inside. “What’s that about?” Let me explain—
Rory: It’s another dimension.
The Doctor: It’s basically another dimension— What?
Rory: After what happened with Prisoner Zero I’ve been reading up all on the latest scientific theories. FTL travel, parallel universes.
The Doctor: I like the bit when someone says “It’s bigger on the inside.” I always look forward to that.
Amy: So this date. I’m kinda done with running down corridors. What d’ya think, Rory?

The Doctor: Ah, you’re going to love Venice. So many people did. Byron, Napoleon, Cassanova. That reminds me. 1580. That’s alright. Cassanova doesn’t get born for 145 years. Don’t want to run into him. I owe him a chicken.
Rory: You owe Cassanova a chicken?
The Doctor: Long story. We had a bet.

The Doctor: Who are those girls?
Guido: I thought everyone knew about the Calvierri School.
The Doctor: My first day here, it’s okay. So parents do all sorts of things to get children into good schools. They move house, they change religion. So why are you trying to get her out?
Guido: Something happens in there. Something magical. Something evil.

Rory: And what have you been doing?
Amy: Well… running. And fighting. I’ve been scared. More scared than I thought—
Rory: Did you miss me?
Amy: I… I knew I’d be coming back.
Rory: He was right. It blots out everything else.
Amy: Rory, it’s our date. Let’s not do this.

The Doctor checking the mirror: Hello Handsome.
The Girls: Who are you?
The Doctor: How are you doing that?! I am loving it! You’re like Houdini, only five slutty, scary girls. And he was shorter—will be shorter. I’m rambling.
The Girls: I’ll ask you again, Signor. Who are you?
The Doctor: Why don’t you check THIS out. Library card. Of course. It’s with {mimes Rory’s nose}. He’s… I need a spare. Pale creepy girls who don’t like sunlight and can’t be seen. Am I thinking what I think I’m thinking? But the city, why shut down the city? Unless—
The Girls: Leave now Signor, or we shall call for the steward. If you’re lucky.
The Doctor: Tell me the whole plan! {silence} One day that’ll work. Listen, I would love to stay here. This whole— I’m thrilled. Oh, this is Christmas!

Guido: There is another option. I work at the arsenale. We build the warships for the Navy.
The Doctor: Gun powder. Most people just nip stationery from where they work. Look, I have a thing about guns and huge quantities of explosives.

Rory: This whole thing is mental! They’re vampires, for Gods sake.
The Doctor: No.
Amy: So if they’re not vampires…
The Doctor: It makes you wonder what could be so bad it doesn’t actually mind us thinking it’s a vampire.

Rory: What’s with you and Amy? You said she kissed you.
The Doctor: Now? You want to do this NOW?
Rory: I have a right to know. I’m getting married in 430 years.

Rosanna: Psychic paper. Did you really think that would work on me?

Rory: I can’t see a thing. Just as well. I brought this then. {whips out a keychain flashlight.}
The Doctor pulls out a light wand: Ultraviolet. Portable sunlight.
Rory: Yours is bigger than mine.
The Doctor: Let’s not go there.

Rosanna: Where are you from? Did you fall through the chasm?
Francesco (Alex Price): Mother. This is pointless. Let’s just start the process.
Rosanna: Hold your tongue, Francesco! I need to know what this girl is doing in the world of savages with psychic paper. Who are you with? See, I scarcely believe your idiot brother sent you. What are you doing in my school?
Amy: Okay. I’ll tell you. I’m from Ofsted.

The Doctor: Cab for Amy Pond?
Rosanna: This rescue plan, not exactly water tight is it?

The Doctor: Long way from Saturnyne, aren’t you? Sister of the Water.
Rosanna: No, let me guess. The owner of the psychic paper. Then I take it you’re a refugee like me.
The Doctor: I’ll make you a deal. An answer for an answer.
You’re using a perception filter. It doesn’t change your features but manipulates the brain waves of the person looking at you. Seeing one of you for the first time in, say, a mirror, the brain doesn’t know what to fill the gap with so leaves it blank. Hence no reflection.
Rosanna: Your question?
The Doctor: Why can we see your big teeth?
Rosanna laughing: Self-preservation overrides the mirage. The subconscious perceives the threat and tries to alert the conscious brain.
The Doctor: Where’s Isabella?
Rosanna: My turn. Where are you from?
The Doctor: Gallifrey.
Rosanna: You should be in a museum. Or in a mausoleum.
The Doctor: Why are you here?
Rosanna: We ran from the Silence. Why are you here?
The Doctor: Wedding present. The Silence?
Rosanna: There were cracks. Some were tiny. Some were as big as the sky. Through some we saw worlds, and people. And through others we saw silence. And the end of all things. We fled to a nation like ours. And the crack snapped shut behind us. Saturnyne was lost.
The Doctor: So Earth is to become Saturnyne mark two.
Rosanna: And you can help me. We can build a new society here as others have. What d’you say?
The Doctor: Hm.
Where’s Isabella.
Rosanna: Isabella?
The Doctor: The girl who saved my friend.
Rosanna: Oh, deserters must be executed. Any general will tell you that. I need an answer, Doctor. A partnership. Any which way you chose.
The Doctor: I don’t think that’s such a good idea, do you? I’m a Time Lord. You’re a big fish. Think of the children.

The Doctor: Blimey. Fish from space have never been so… buxom.

The Doctor: The girls are gone, Rosanna.
Rosanna: You’re lying.
The Doctor: Shouldn’t I be dead. Hm? Rosanna, please, help me. There are two hundred thousand people in this city.
Rosanna: So save them.

Rory: This way, you freak! No, you… big stupid great Spongebob…

Rosanna: One city to save an entire species. Was that too much to ask?

Rosanna: Tell me Doctor, can your conscience carry the weight of another dead race? Remember us. Dream of us.

The Doctor: Rory, listen to that,
Rory: Uh, what? All I can hear is… silence.