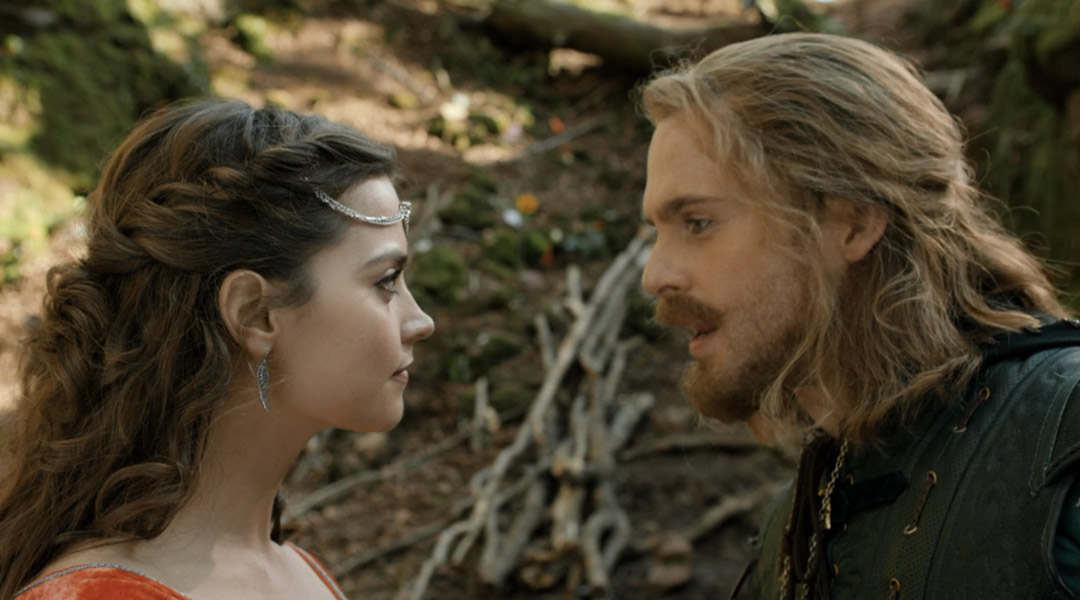 The Doctor: Old-fashioned heroes only exist in old-fashioned storybooks, Clara.
Clara: And what about you?
The Doctor: Me?
Clara: Yeah, you. You stop bad things happening every minute of every day. That sounds pretty heroic to me.
The Doctor: Just passing the time.

The Doctor: Hey! What about Mars?
Clara: What?
The Doctor: The Ice Warrior Hives.
Clara: You said it was my choice.
The Doctor: Or the Tumescent Arrows of the Half-Light. Those girls can hold their drink.
Clara: Doctor.
The Doctor: And fracture fifteen different levels of reality simultaneously. I think I’ve got a Polaroid somewhere.

The Doctor: No damsels in distress. No pretty castles. No such thing as Robin Hood {an arrow narrowly misses him}.
Robin Hood (Tom Riley): You called?

Clara: You found him. You actually found Robin Hood.
The Doctor: That is not Robin Hood!
Robin Hood: Well then who, sir, is about to relieve you of your magic box?

The Doctor: I have no sword. I don’t need a sword. Because I am the Doctor and this is my spoon. En garde!

Clara: You’re amazing.
The Doctor: I’ve had some experience. Richard the Lionheart. Cyrano de Bergerac. Errol Flynn! He had the most enormous.
Clara: Ahem.
The Doctor: Ego!
Clara: Takes one to know one.

Quayle (Roger Ashton-Griffiths): This is the Sheriff’s doing! If he were here now I’d tear out his black heart!
The Sheriff of Nottingham (Ben Miller): Would you now? Or are you as milk-livered as your name suggests, Master Quayle?

Quayle: Your days are numbered, you cur! {he spits at him}
Sheriff: You shall live to regret that. Actually… no. You won’t {he kills him}.

Clara: Oh, I cannot believe it’s you. You really are Robin Hood and his Merry Men.
Robin Hood: Aye! That is an apt description. Ha! What say you, lads?

Clara: What are you doing?
The Doctor: Well they’re not holograms, that much is obvious. Could be a theme park from the future. Or we might be inside a miniscope!
Clara: Oh, shut up.
The Doctor: A miniscope! Yes of course. Why not!

Clara: “Dark days.”
Robin Hood: My lady?
Clara: You said that these were dark days. What did you mean?
Will Scarlet (Joseph Kennedy): King Richard is away on crusade, my lady. His tyrant of a brother rules instead.
Clara: And the Sheriff. ‘Cause there is a sheriff, right?
Alan-a-Dale (Ian Hallard): Aye, It is indeed this jackal of the Prince’s who seeks to oppress us for evermore.
The Doctor: Or six months in your case.

Clara: Why are you so sad?
Robin Hood: Why do you think me sad?
Clara: Because the Doctor’s right: you laugh too much.

Robin Hood: You know maybe one day I’ll be able to return home but until that day—until that day—it is beholden to me to be the man that Marian wanted. To be a hero for those this tyrant sheriff slaughters.

Clara: What are you up to?
The Doctor: Quickest way to find out anybody’s plans: get yourself captured/

Robin Hood: Trussed up like turkey cocks. All this thanks to your friend.
The Doctor: Shut it, Hoodie. I saved your life.
Robin Hood: I had the situation well in hand.
The Doctor: Long-haired ninny versus robot killer knights?
I know where I’d put my money.

Clara: Do either of you understand in any way at all that there isn’t actually a guard out there?
The Doctor: Oh.
Robin Hood: I did in fact.
The Doctor: No you didn’t.
Clara: I said shut up. The Doctor and Robin Hood locked up in a cell. Is this seriously the best that you can do?

Clara: Robin, your plan.
Robin Hood: I am… biding my time.
Clara: Thank you, Prince of Thieves. Last of the Time Lords?
The Doctor: Yes. I have a plan.
Clara: Can you explain your plan without using the words “sonic screwdriver”? Because you might have forgotten the Sheriff of Nottingham has taken your screwdriver. Just saying. It’s always the screwdriver.

Sheriff: Tell me. Are you from beyond the stars?
Clara: You’re the one with the robot army. You tell me.

Sheriff: Enough questions. I am impatient to hear your story.
Clara: Oh, but I do not have one. I was lying.
Sheriff: Lying?
Clara: Yeah. People are so much better at sharing information if they think the other person has already got it.
Sheriff: Oh that’s very clever.
Clara: Thank you.

The Doctor: At last. Something real. No more fairy tales.
Robin Hood: What is this place?
The Doctor: A spaceship. More twenty-ninth century than twelfth.

The Doctor: This explains everything, even you.
Robin Hood: It does?
The Doctor: Well what does every oppressed peasant workforce need? The illusion of hope. Some silly story to get them through the day, lull them into docility, and keep them working. Ship’s databanks, full of every myth and legend you could hope for, including… Robin Hood.

The Doctor: Isn’t it time you came clean with me? You’re not real and you know it. Look at you! Perfect eyes, perfect teeth. Nobody has a jawline like that. You’re as much a part of what is happening here as the Sheriff and his metal knights. You’re a robot.
Robin Hood: You dare to accuse me of collusion with that villain the Sheriff?
The Doctor: I dare!
Robin Hood: You false-tongued knave! I should have skewered you when I had the chance!
The Doctor: I would like to see you try.

Quayle’s Ward/Marian (Sabrina Bartlett): I think I understand you. The Sheriff’s using the gold to replace things.
The Doctor: That’s the principle. But he’s a moron.

The Doctor: What you’re doing will alter the course of history.
Sheriff: I sincerely hope so. Otherwise I wouldn’t be bothering.

The Doctor: But he can’t be. He’s not real. He’s a legend!
Robin Hood from above: Too kind. And this legend does not come alone!
Clara: Hiya. {they use the old knife-down-the-cloth-flag trick}
Robin Hood: You alright?
Clara: Hell yeah.
Robin Hood: Good.

The Doctor: Where is it? Where did it go?
Clara: Where did what go?
The Doctor: The golden arrow.
Robin Hood: Tuck!
The Doctor: You took it?
Friar Tuck (Trevor Cooper): Of course we did. We’re robbers.
The Doctor: I love you boys.

Clara: Be safe if you can be. But always be amazing.

Robin Hood: So. Is it true, Doctor?
The Doctor: Is what true?
Robin Hood: That in the future I am forgotten as a real man. I am but a legend.
The Doctor: I’m afraid it is.
Robin Hood: Hm. Good. History is a burden. Stories can make us fly.
The Doctor: I’m still having a little trouble believing yours, I’m afraid.
Robin Hood: Is it so hard to credit, that a man born into wealth and privilege should find the plight of the oppressed and weak too much to bear?
The Doctor: I know, b—
Robin Hood: Until one night he is moved to steal a TARDIS, fly among the stars, fighting the good fight. Clara told me your stories.
The Doctor: She should not have told you any of that.
Robin Hood: Well once the stories started she could hardly stop herself.

Robin Hood: You are her hero, I think.
The Doctor: I’m not a hero.
Robin Hood: Well neither am I. But if we both keep pretending to be—he laughs—perhaps others will be heroes in our name. Perhaps we will both be stories. And may those stories never end. Goodbye, Doctor. Time Lord of Gallifrey.
The Doctor: Goodbye, Robin Hood. Earl of Loxley.
Robin Hood: And remember, Doctor, I’m just as real as you are.

Clara: Admit it, you like him.
The Doctor: Well, leaving him a present, aren’t I?