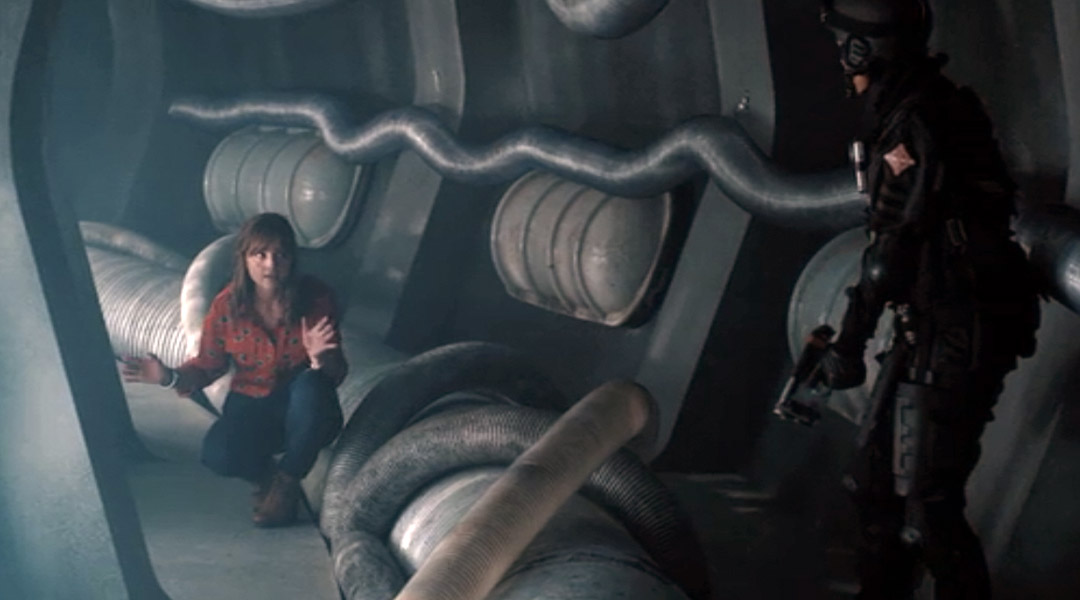 Journey Blue (Zawe Ashton): How did I get here?
The Doctor: I materialized the time capsule exactly around
you and saved your life one second before your ship exploded, but do please keep crying.
Journey Blue: My brother just died.
The Doctor: His sister didn’t. You’re very welcome. Put the gun down.
Journey Blue: Or what?
The Doctor: Or you might shoot me. Then where would you be?
Journey Blue: In charge of your vessel.
The Doctor: You’d starve to death trying to find the light switch.

The Doctor: The Aristotle’s the big fella parked in the asteroid belt, yeah?
Journey Blue: It’s shielded.
The Doctor: More or less.

The Doctor: Dry your eyes, Journey Blue. Crying’s for civilians. It’s how we communicate with you lot.

Journey Blue: It’s smaller on the outside.
The Doctor: Yeah, it’s a bit more exciting when you go the other way.

Journey Blue: You don’t like soldiers much, do you?
The Doctor: You don’t need to be liked. You’ve got all the guns.

The Doctor: Do you use it to shrink the surgeon so they can climb inside the patients?
Colonel Blue: Exactly.
The Doctor: Fantastic idea for a movie. Terrible idea for a proctologist.

Clara: Was it you that I saw outside doing the soldiery thing?
Danny: Oh yeah, probably the Coal Hill cadets. Just a bit of fun.
Clara: What, teaching them how to shoot people?
Danny: There’s a bit more to modern soldiering than just shooting people. I like to think there’s a moral dimension.
Clara: Ah. You shoot people and then you cry about it afterwards. Is something wrong?
Danny: Nothing. No. Sorry, no. Nothing. I just didn’t think they would say anything, that’s all.
Clara: Sorry?
Danny: Have they told everyone?

Clara: Is the wooden sound you or the desk?
Danny: How long have you been there?
Clara: Longer than you would like.
Danny: Okay.
Clara: Are you going to look that terrified when you take me out for that drink?

The Doctor: I need something from you. I need the truth.
Clara: Okay. Right. What is it? What’s…. You’re scared.
The Doctor: I’m terrified.
Clara: Of what?
The Doctor: The answer to my next question. Which must be honest, cold and considered without kindness or restraint. Clara, be my pal. Tell me. Am I a good man?
Clara: I… don’t know.
The Doctor: Neither do I.

Clara: Where are we going?
The Doctor: Into darkness.

Dalek: Doctor.
The Doctor: How do you know who I am?
Colonel Blue: He doesn’t. We promised him medical assistance.

The Doctor: Do I pay you? I should give you a raise.
Clara: You’re not my boss. You’re one of my hobbies.

The Doctor: This is Gun Girl. She’s got a gun and she’s a girl. This is the sort of boss one. Are you the same one as before?
Colonel Blue: Yes.
The Doctor: I think he’s probably her uncle but I may have made it up to pass the time when they were talking. This is Clara. Not my assistant, she’s ah, some other word.
Clara: I’m his carer.
The Doctor: Yeah. My carer. She cares so I don’t have to.

Clara: So what do we do with a moral Dalek?
The Doctor: We get into its head.
Clara: Hm. How do you get into a Dalek’s head?
The Doctor: That wasn’t a metaphor.

The Doctor: What are those ones for? I don’t need armed babysitters.
Gretchen (Laura dos Santos): We’re not babysitters.
Ross (Ben Crompton): We’re here to shoot you dead if you turn out to be a Dalek spy.
The Doctor: Well that’s a relief. I hate babysitters.

The Doctor: Ever microwaved a lasagna without pricking the film on top?
Clara: It explodes.
The Doctor: Don’t be lasagna.

Clara: What are the lights?
The Doctor: Visual impulses, traveling towards the brain.
Clara: Beautiful.
The Doctor: Welcome to the most dangerous place in the universe.

The Doctor: Imagine the worst possible thing in the universe and then don’t bother, because you’re looking at it right now. This is evil refined as engineering.

Clara: Oh god.
Gretchen: What? What is it?
Clara: Antibodies?
The Doctor: Dalek antibodies.

As antibodies are removing the remains of Ross
Clara: Oh my god, what’s it doing?
The Doctor: They’re hoovering.

Journey Blue: I thought you were saving him!
The Doctor: He was dead already! I was saving us.

Clara: What is this stuff?
The Doctor: People. Daleks need protein. Occasionally they harvest from the victims. This is a feeding tube.
Journey Blue: Is Ross here?
The Doctor: Yeah. Top layer if you want to say a few words.

The Doctor: Mortuaries and larders. Always the easiest to break out of.

Clara: He’ll get us out of here. The difficult part is not killing him before he can.
The Doctor: Bolt hole. Actually a hole for a bolt. Does nobody get that?
Clara: Also there’s the puns.

Clara: Any remarks about my hips will not be appreciated.
The Doctor: Ah, your hips are fine. You’re built like a man.
Clara: Thanks.

The Doctor: Well you know how I said this was the most dangerous place in the universe? I was wrong. It’s way more dangerous than that.

Dalek: I saw beauty.
The Doctor: You saw what?
Dalek: In the silence and the cold. I saw worlds burning.
Journey Blue: That’s not beauty, that’s destruction.
Dalek: I saw more.
The Doctor: What? What did you see?
Dalek: The birth of a star.
The Doctor: A star is born every day. You’ve seen a million stars born. So what?
Dalek: Daleks have destroyed millions of stars.
The Doctor: Millions and millions. Trust me. I keep count.

The Doctor: Rusty, can you hear me?
Dalek: Doctor!
The Doctor: Rusty, we’ve found the damage. I’m sealing up the breach in your power cell. No mere radiation poisoning. Good as new. There. Job done..
Clara: That’s it, just like that?
The Doctor: An anti-climax once in awhile. It’s good for my hearts.

Dalek: The malfunction is corrected. All systems are functioning. Weapons charged. Exterminate! Exterminate!

Clara: Doctor, what happened?
The Doctor: You see?
Clara: I see what.
The Doctor: Daleks never turn good.

The Doctor: There was never a good Dalek. There was a broken Dalek and we repaired it.

The Doctor: What’s that look for?
Clara: It’s the look you get when I’m about to slap you. {she slaps him} We’re going to die in here. And part of you is a little bit pleased.

Clara: Why did we come here today? What was the point? You. You thought there was a good Dalek. What difference would one good Dalek make?
The Doctor: All the difference in the universe, but it’s impossible.
Clara: Is that a fact? Is that really what we’ve learned today? Think about it. Is that what we’ve learned?

Journey Blue: Are you out of your mind?
The Doctor: No! I’m inside a Dalek. I’m standing where I’ve never been. We cannae waste this chance. It won’t come again.

The Doctor: A Dalek is a better soldier than you will ever be. You can’t win this way.
Journey Blue: So what do we do?
The Doctor: Something better.

The Doctor: You need to get up there, find that moment, and reawaken it.
Clara: Me?
The Doctor: Yes you. Good idea.
Clara: How?
The Doctor: Haven’t the foggiest. Do a clever thing.

Gretchen: Gretchen Alison Carlisle. Do something good and name it after me.
The Doctor: I will do something amazing. I promise.
Gretchen: Damn well better.

Dalek: You cannot save the humans. They will be exterminated. I shall join the Dalek unit in the final attack.

Journey Blue: So what do we do?
Clara: Ah…. a clever thing quickly.

Clara: So the Doctor said that this was a memory bank and some of the memories were suppressed. What if… what if the dark spots are hidden memories? What if one of those is the Dalek seeing the star?
Journey Blue: Seriously?
Clara: Yeah. Well. Maybe. It’s either that or the bulbs need changing.

The Doctor: I saved your life, Rusty. And now I’m going to go one better. I’m going to save your soul.
Dalek: Daleks don’t have souls.

Clara: I’m in the cortex.
Journey Blue: If there’s a pack of spare bulbs, break it to me gently.

The Doctor: You see all those years ago, when I began, I was just running. I called myself The Doctor, but it was just a name. And then I went to Skaro. And then I met you lot. And then I understood who I was. The Doctor was not the Daleks.

Dalek: I see into your soul, Doctor. I see beauty. I see divinity. I see… hatred!
The Doctor: Hatred?
Dalek: I see your hatred of the Daleks and it is good!

Dalek: The Daleks are exterminated!
The Doctor: Of course they are. That’s what you do, isn’t it?

Dalek: Victory is yours. But it does not please you.
The Doctor: You looked inside me and you saw hatred. That’s not victory. Victory would have been a good Dalek.
Dalek: I am not a good Dalek. You are a good Dalek.

The Doctor to the Dalek: ’Til the next time.
Journey Blue: Is he leaving? Isn’t going to say goodbye?
Clara: I think that was it. {checking} Yep, that was it.

Journey Blue: Doctor. Take me with you.
The Doctor: I think you’re probably nice. Underneath it all I think you’re kind. You’re definitely brave. I just wish you hadn’t been a soldier.

Clara: How do I look?
The Doctor: Sort of short and roundish but with a good personality, which is the main thing.
Clara: I meant my clothes, I just changed.
The Doctor: Oh good for you. Still making an effort.

Clara: When will I see you again?
The Doctor: Ah. Soon, I expect. Or later. One of those.

Danny: I thought you might have a rule against soldiers.
Clara: No. No, not at all. {walking away} Not me.