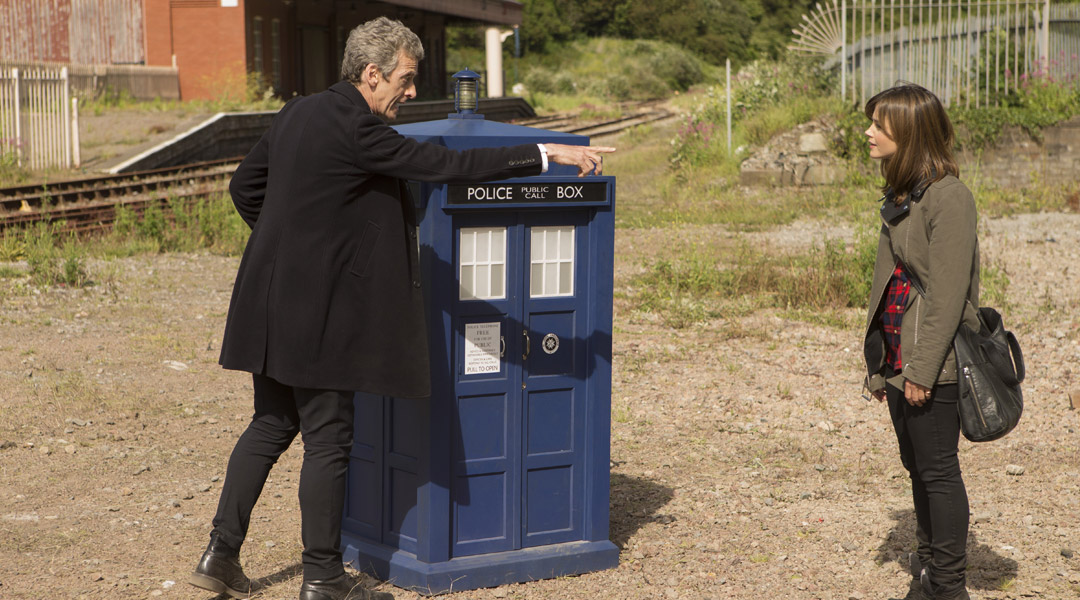 Roscoe (John Cummins): Police please. Hello? Yes. I know who did it. Who did it all. I figured it out. […] No. No, I can’t speak up. They might hear me. {a buzzing noise gets louder} Oh no. Oh no. Listen. Listen. They’re everywhere. All around. We’ve been so blind.

The Doctor: You could leave all that stuff here, you know. We do have literally acres of room.
Clara: Oh no, that’s all right. Danny’s got a little bit territorial. The idea of me leaving so much as a toothbrush here. But still, he’s all right with us doing this, which I admit is a little bit weird, because you’d think if he had a problem with me leaving stuff in the TARDIS, he’d object to me traveling in the TARDIS but he’s not, so…
The Doctor: Sorry, stopped listening awhile ago. Okay, ah, same time you left, same place… ish.
Clara: “Ish”? Don’t give me an “ish”.
The Doctor: These readings are very, um, ishy.

Clara: Um. Doctor.
The Doctor: Uh huh? {the door has gotten rather small}

The Doctor: Well. I wonder what caused this. I don’t think we’re bigger, are we?
Clara: Bristol! Doctor, we’re in Bristol!
The Doctor: And 120 miles from where we should be. Impressive.
Clara: No. Not impressive. Annoying.
The Doctor indicating the TARDIS: No, this is impressive. {indicating her} This is annoying. The TARDIS never does this. This is huge! Well not literally huge. Slightly smaller than usual. Which is huge!
Clara: Yes, I get it. You’re excited. When can I go home?
The Doctor: Your house isn’t going anywhere. And neither is mine until I get this figured out.

The Doctor: Could you not just let me enjoy this moment of not knowing something? I mean it happens so rarely.

The Doctor: I need you to help me find out what’s caused this.
Clara: Fine. I’ll go take look around.

Rigsy (Joivan Wade): Is your own in the mural?
Clara: Oh. No, I haven’t actually—
Rigsy: I’m sure they’ll get around to it at some point. I’m not really with that lot out there. I just have to do this community service thing.

Clara: Hey. I think I found something. People are missing all over the estate. Do you think there’s a connection?
The Doctor: Could be.
Clara: And where are you?
The Doctor: Exactly where I was.
Clara: No you’re not. I’m here and I can’t see. Oh.
The Doctor: Yes. “Oh.”
Clara: Oh my god, that is so adorable. Are you in there?
The Doctor: Yes I am. No, it’s not adorable. It’s very very serious.

The Doctor: Something nearby by is leeching all the external dimensions.
Clara: Aliens?
The Doctor: Possibly. Oh, who am I kidding. Probably.

Clara taking the screwdriver and psychic paper: Wow. It’s an honor. Does this mean I’m you now?
The Doctor: No, it does not. So don’t get any ideas.

Clara: Anything?
The Doctor: Yes, I’m dizzy. But nothing useful.

Rigsy: You never did tell me your name.
The Doctor: No time to fraternize. Come on, get rid of him.
Clara: I’m, um… I’m the Doctor.
The Doctor: Don’t you dare.
Clara: Doctor Oswald. But you can call me Clara.
Rigsy: I’m Rigsy. So, ah, what are you a doctor of?
The Doctor: Of lies.
Clara: Well I’m usually quite vague about that. I think I just picked the title because it makes me sound important.
The Doctor: Why Dr. Oswald, you are hilarious. Could we get back to work, do you think?

Rigsy: …He was the last one to go missing. And when he disappeared, all the doors and windows were locked from the inside.
The Doctor: Oh, now you’re talking. I love a good locked room mystery.
Clara: Yeah, doesn’t everyone?
Rigsy: What?

Rigsy: It’s bigger. On the inside.
The Doctor: You know, I don’t think that statement’s ever been truer.

The Doctor: Clara, wait go back. Back back back back! That mural! That is a nervous system, scaled up and flattened. I think we found PC Forrest. What’s left of her at least.
Clara: Her nervous system.
The Doctor: The mural in the flat? That wasn’t a desert at all. It’s a microscopic blob of human skin.
Clara: What? Why?
The Doctor: Whatever they are, they are experimenting, they are testing, they are dissecting. Trying to understand us, trying to understand… three dimensions!

Danny (Samuel Anderson): Where are you and are you in trouble?
Clara: No no no. I’m fine. {they crash out the window}
Danny: Clara. Clara? What’s happening?
Clara: Not much. Just some nonsense. Long story.
Danny: What story?
Clara: I’ll tell you later. Love you!

The Doctor: This explains everything. They’re from a universe with only two dimensions. And yes, that is a thing! It’s long been theorized of course, but no one could go there and prove its existence without a heckuva diet.

The Doctor: Excellent lying, Doctor Oswald.
Clara: Yeah? Well I thought it was pretty weak myself.
The Doctor: I meant to me. You told me that Danny was okay with you being back onboard the TARDIS.
Clara: Well… he is.
The Doctor: Yeah, because he doesn’t know anything about it.

The Doctor: Congratulations. Lying is a vital survival skill.
Clara: Well there you go.
The Doctor: And a terrible habit.

The Doctor: We found the missing people. They’re in the walls!
Clara: What do I do?
The Doctor: Act normal. But get everybody out.

Fenton (Christopher Fairbank): And who are you when you’re at home, love?
Clara: Health and Safety. This subway isn’t safe. Everyone needs to leave right now.

Fenton: This is blank. try again, sweetheart.
Both: What?
The Doctor: It takes quite a lack of imagination to beat psychic paper.

Al (Matt Bardock): Are we really hiding from killer graffiti? This is insane.
The Doctor: I agree. We’ll have to think of a better name for them than that.

The Doctor: Clara, this is a vital stage. This little group is currently confused and disorientated. But pretty soon a leader is going to emerge. You need to make sure that leader is you.
Clara: I’m on it.

The Doctor: But here’s the big question: do they know they’re hurting us?
Clara: So what, you think this is all one big misunderstanding?
The Doctor: That’s a very good question. Why don’t we ask them.

Fenton: This is a bad idea. What makes this colleague of yours think those monsters even want to talk?
The Doctor: I know a race made of sentient gas who throw fireballs as a friendly wave. I know another race with 64 stomachs who talk to each other by disemboweling.
Clara: He’s got a hunch.
The Doctor: My point being, that in a universe as immense and bizarre as this one, you cannot be too quick to judge. Perhaps these creatures don’t even understand that we need three dimensions to live in. They may not even know that they’re hurting us.
Clara: Do you really believe that?
The Doctor: No. I really hope that. It would make a nice change, wouldn’t it?

The Doctor: Okay, let’s start with pi. Even in a flat world they would have circles. I don’t mean edible pie, I mean circular pi. Which I realize would also mean edible pie. But… anyway.

The Doctor: This should be able to restore dimensions. See what I called it?
Clara: Two-D-Iz. Twodeeis.
The Doctor: No. Toodis. It’s called the Toodis. Why do I even bother.

Clara: Listen! The Doctor thinks we might be in trouble. He thinks they might be close.
Fenton: Where exactly?
Clara: I don’t know, he’s not sure. He’s getting readings all around.
Fenton: Oh well that’s just great. Sounds important but means absolutely nothing. Can you tell your friend— {a 3D hand grabs Bill}
The Doctor: Of course. The next stage. 3D. {creatures start emerging from the ground}

The Doctor: Uh. I’m on the train lines. And there’s a train coming. Of course there is.

The Doctor: I don’t know if you can still hear me out there. The TARDIS is now in siege mode. No way in, no way out. I managed to turn it on just before the train hit. But there’s not enough power left now to turn it off.

Bill (James Quinn): What’s going on? Why the red-light?
Clara: MI-5. We’ve got a, um…
Fenton: Blockage. In the tunnel.
Clara: Can we ram the… blockage? The train’s empty, isn’t it?
Bill: Yeah, it’s out of service. But you’d need someone to hold the dead man’s handle. Won’t run without it. Is this official? Because I’ve always wanted to ram something.

Clara: What are you doing?
Rigsy: I’m going to ram them. Give you some time.
Clara: You’ll die.
Rigsy: Yeah, of course I’ll die. Now go!
Clara: Well why do you want to do that?
Rigsy: Just go, okay? Let me do this.
Clara: Okay, fine. Yeah. And I’ll always remember you.
Rigsy: Fine, you’re great.
Clara: ‘Cause I was just gonna do this. {she attaches a band to the switch} No driver required. And I really liked that headband. But I suppose I’ll just take it, will I. And every time I look at it, I’ll always remember the hero who died to save it. Come on. You’re not getting off that lightly. There’s work that needs doing.

Fenton: You’re gonna get us killed. This plan’s insane.
Clara: You wanna walk, walk. You wanna stay, then shush.

The Doctor: Life support’s failing. I don’t know if you’ll ever hear this, Clara. I don’t even know if you’re still alive out there. But you were good. And you made a might fine Doctor.

Clara: Rule number one of being the Doctor: use your enemy’s power against them. They can’t restore three dimensions to a door that never existed.

The Doctor: I tried to talk. I want you to remember that. I tried to reach out. I tried to understand you. But I think that you understand us perfectly. I think that you just don’t care. And I don’t know whether you are here to invade, infiltrate, or just replace us.  I don’t suppose it really matters now. You are monsters! that is the role you seem determined to play. So it seems that I must play mine. The man that stops the monsters. I’m sending you back to your own dimension. Who knows? Some of you may even survive the trip. And if you do, remember this: you are not welcome here. This plane is protected. I am the Doctor! And I name you the Boneless.

Clara: You all right?
Bill: I’m alive. And I’ve been inside that {indicates the TARDIS}. I think I’m up on the deal.

Clara: I was you today. I was the Doctor. And apparently I was quite good at it.
The Doctor: You heard that, did you?

The Doctor: Your last painting was so good it saved the world. I can’t wait to see what you do next.
Rigsy: It’s not gonna be easy. I’ve got a hairband to live up to.

Clara: Why can’t you say it? I was the Doctor and I was good.
The Doctor: You were an exceptional Doctor, Clara.
Clara: Thank you.
The Doctor: Goodness had nothing to do with it.

Missy (Michelle Gomez): Clara. My Clara. I have chosen well.