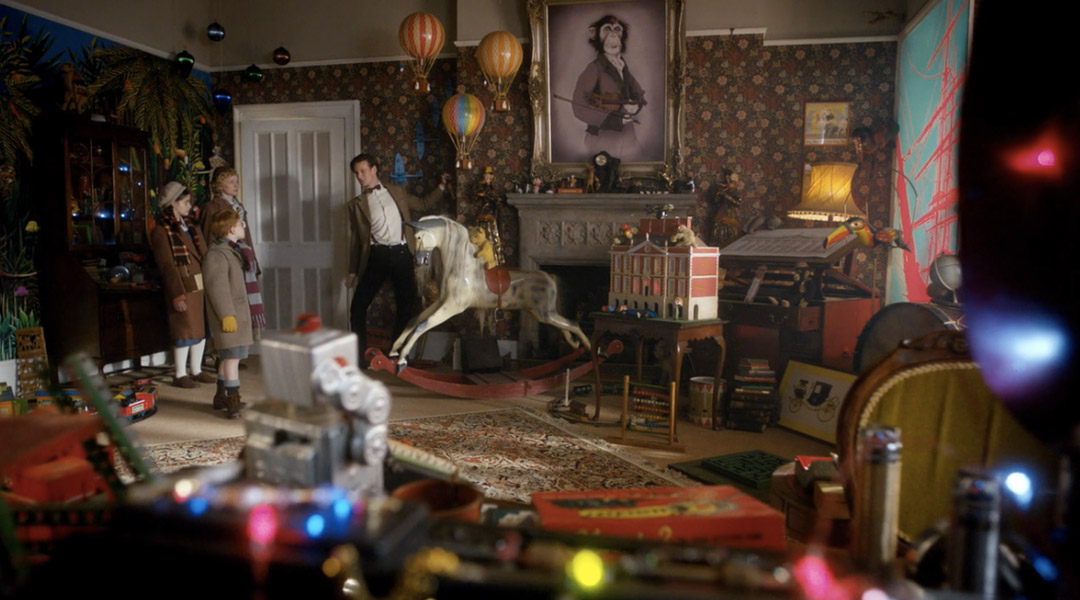 Madge Arwel (Claire Skinner): Are you alright? Are you hurt? Did you fall? {she looks up} Where did you fall from?
The Doctor: Helmet.
Madge: Alright. Just, just let me…. I don’t want to hurt you. {she flips up the visor} Oh!
The Doctor: I can’t see. I’m blind!
Madge: Oh no, love. No. I think you’ve just got your helmet on backwards. How did you manage that?
The Doctor: I got dressed in a hurry.

Madge: Where’s your father?
Cyril: He’s in the garden.
Madge: What’s he doing in the garden?
Cyril: Agriculture.
Lily from the other room: You’re not fooling anyone.

Madge: Listen, Cyril, tell him that I’ve borrowed Mr. Goldsmith’s car. That I’ve found a spaceman in a field—possibly an angel—but he’s injured and I can’t get his helmet off. So I’m having to take him into town to find a police telephone box. Alright?
Cyril: Alright.
Madge: Good boy!

Reg (Alexander Armstrong): Was that your mother? Where’s she going?
Cyril: Out.

The Doctor: I’m fine. I just need to find the key.
Madge: Oo. Do you want me to do it with a pin? I’m good with a pin.
The Doctor: Multi dimensional triple encoded temporal interface. Not really susceptible to pointy things.
Madge: Got it. {she picks the lock}
The Doctor: Okay. Suddenly the last nine hundred years of time travel seem a bit less secure.

Madge: It’s Christmas Eve. No one should be alone at Christmas.

The Doctor: If there’s ever anything that I can do for you, let me know.
Madge: How?
The Doctor: I don’t know. Make a wish. That usually works.
Madge: Does it?
The Doctor: Well it did for me. You’re here, aren’t ya?

The Doctor: Wrong one. Do you think we could try again?

Madge: What are you reading? Not the war again. If people keep reading about the war then it will actually happen. And then where will you be?

Cyril: When’s Father coming back?
Lily: For Christmas like he always does.

Cyril: Is it haunted?
Lily: Is it drafty?

Cyril: But why do we have to come here?
Lily: Because of the bombing, stupid.
Cyril: I like the bombing. It’s exciting.

Lily: Will Father be here? He will be, won’t he? You said he’d meet us at the house.
Madge: He’ll be here! Of course he will. You don’t need to keep asking about it.

The Doctor: Don’t worry the back door is still, broadly-speaking, operational.

Madge: Wait. Who are you?
The Doctor: I’m the caretaker!
Madge: But you’re not Mr. Cardew.
The Doctor: I agree.

Madge: But I don’t understand. Are you the new caretaker?
The Doctor: I’m usually called the Doctor. Or the caretaker. Or “Get off this planet.” Though strictly speaking that probably isn’t a name.

The Doctor: Now come on, come on. Lots to see. Whistlestop tour. Take notes. There will be questions.

The Doctor: Smallish sitting room. Just chairs. BIt pointless without a television. So I made some repairs. {the kids look awed} I know.

The Doctor: Kitchen! That’s a cooker. Probably. And these are taps. Hot. Cold. Lemonade.
Lily: Lemonade?
The Doctor: I know!

The Doctor: Staircase! {he taps a stair} Seems to have broken down. We’ll have to walk up.

The Doctor: I sleep up there. Stay away. Beware of panthers.
Lily: Panthers?
The Doctor: They’re terrifying!

Madge: Where are the beds?
The Doctor: Well I couldn’t fit everything in. There had to be sacrifices. Besides, who needs beds when you’ve got {he pulls a lever} hammocks! I know.

Madge: Why are you doing all this?
The Doctor: I’m just trying to take care of things. I’m the caretaker.
Madge: That’s not what caretakers do.
The Doctor: Then why are they called caretakers?
Madge: Their father’s dead.
The Doctor: I’m sorry.
Madge: Lily and Cyril’s father—my husband—is dead and they don’t know yet because if I tell them now then Christmas will always be what took their father away from them, and no one should have to live like that. Of course when the Christmas period is over I shall… I don’t know why I keep shouting at them.
The Doctor: Because every time you see them happy you remember how sad they’re going to be. And it breaks your heart. Because what’s the point in them being happy now if they’re going to be sad later. The answer is, of course, because they a re going to be sad later.

The Doctor: Now. We better get downstairs. I think they may have found the main sitting room. I repaired it.

Madge: That man is quite ridiculous. You must stay away from him.
Lily: I like him.
Cyril: I like him too.

Lily: You were lying about the panthers.
The Doctor: Famous last words.

Lily: Who are you? Really who are you?
The Doctor: Your brother, where is he?

Lily: Where are we?
The Doctor: In a forest. In a box. In a sitting room. Pay attention.

Lily: But I don’t understand where we are.
The Doctor: We’ve gone through a dimensional portal… thingie.
Lily: Well what’s that supposed to be? Where did it come from?
The Doctor: It was a present. And it wasn’t supposed to be opened ’til Christmas Day. Honestly! Who opens their Christmas presents early? Okay. Shut up. Everyone.

Lily: I don’t understand. Is this place real? Or is it fairyland?
The Doctor: Fairyland? Oh grow up, Lily! Fairyland looks completely different.

The Doctor: These are Cyril’s footprints and these are the ones he was following. Notice anything?
Lily: The other footprints are getting bigger.
The Doctor: Yes. Whatever your brother’s following, it’s growing.

Lily: Is that tree alive?
The Doctor: Of course it’s alive. It’s a tree.
Lily: But is it dangerous?
The Doctor: Ah. Every rose has its thorns.

The Doctor: I’ve been here many times but I’ve never heard the trees so active. Something’s wrong. What are you doing? What are you up to?

The Doctor: I’m sorry, Lily, I really am, but there is something very wrong in this forest. And your brother’s right in the middle of it.

Lily: Why would you bring us to this place?
The Doctor: It was supposed to be a treat. This is one of the safest planets I know. There’s never anything dangerous here. {the forest shakes} There are sentences I should just keep away from.

Droxil: Do you understand what is about to happen in this forest?
Madge: I was just—
Billis (Arabella Weir): Sir, I think she’s a time traveller.
Droxil: And we’re sure it’s not her cardigan?

Lily: What’s that? Is that a statue? What is it? Is that a king?
The Doctor: A king possibly, but not a statue. Look at the floor. This is what Cyril was following, the growing thing. Hatched from the bauble on a tree. Grew to this size in less than an hour, I’d say. Impressive!

The Doctor: So a forest grows a building. Why would it do that, Lily?
Lily: I don’t know.
The Doctor: Why is there honey in a honey trap?
Lily: Because it’s a trap?
The Doctor: Exactly. The thing about people, we can never resist a door.
Lily: So this is a trap? We’ve just walked straight into a trap.
The Doctor: A people trap. Question is: why does a forest need people?

Droxil: We’re from Andrezani Major. The year is 5345 and we mean you no harm. Where are you from?
Madge: England. 1941. {she pulls a gun on them} And there’s a war on. Crying’s ever so useful, isn’t it?
Droxil: If you say so. But there’s nothing you could say to convince me you’d ever use that gun.
Madge: Oh really? Well I’m looking for my children.

The Doctor: Oh, of course. It’s wood. It’s rubbish at wood.
Lily: It doesn’t look like wood.
The Doctor: This is disguise wood. Have you been listening?
Lily: How can trees build a building?
The Doctor: Oh never underestimate a tree, Lily. I met the Forest of Cheem once. She fancied me.

Lily: What is that?
The Doctor: Life force. Pure life force. Just… singing.
Lily: Beautiful. Doesn’t it make you want to cry.
The Doctor: Crying when you’re happy. Ah, good for you. That’s so human.

Droxil: This forest is about to be harvested.
Madge: Harvested?
Droxil: Andrezani trees. Greatest fuel source ever. The entire area is being melted down for battery fluid.
Madge: Melted down? How do you melt a forest?
Droxil: Acid rain. The satellites are in position. Anyone still out there in five minutes is going to burn.

The Doctor: Aliens made of wood! This was always going to happen, you know.

Cyril: They’re evacuating.
The Doctor: Why?
Cyril: They’re frightened of the rain. The rain that burns.
Lily: Caretaker, please explain. I’m frightened.
The Doctor: Those stars, they’re pure life force. Souls, if you like. And they’re trying to escape. Because they think their home is going to burn.
Lily: Why can’t they just float up into the sky?
The Doctor: They need to travel inside a living thing. inside Cyril. You see this is not a crown. It’s a relay. They’re turning your brother into a lifeboat.

Wooden Queen: The forest cannot live in him. But there are others.
The Doctor: There certainly are. And the good thing is, I look great in a hat.

The Doctor: Madge? Can you hear me?
Madge: Yes I can hear you. I’m perfectly fine, thank you.
The Doctor: Fine? You’ve got a whole world inside your head!
Madge: I know! It’s funny, isn’t it? One can’t imagine being a forest, then suddenly one can! How remarkable.

Lily: What’s happening?
The Doctor: No idea. Do what I do: hold tight and pretend it’s a plan.

The Doctor: Your mind is controlling this vessel. You can fly us all back for Christmas.
Madge: My head is full of trees, caretaker. Can’t you fly us home?
The Doctor: I don’t have a home to think of. And between you and me, I’m older than I look and I can’t feel the way you do. Not anymore.

The Doctor: Your mother is flying a forest through the time vortex. Be a little impressed!

Madge: Not the night he died! I don’t want to see him die!

Lily: What did you mean, watch him die? Where’s Father? Where’s Daddy?

The Doctor: I imagine you’d prefer to be alone.
Madge: I don’t imagine anyone would prefer that. Stay close, caretaker.
The Doctor: I’ll be right outside.

The Doctor: Madge Arwel, you flew a whole forest through the time vortex. Plus one husband. He did it again, Madge. He followed you home. Look what you can do. Mother Christmas.

Madge: Of course. It’s you, isn’t it! My spaceman angel with his head on backwards.
The Doctor: How do I look? The right-way around.
Madge: Funnier.
The Doctor: Okay.
Madge: So you came back.
The Doctor: Well, you were there for me when I had a bad day. Always like to return a favor. Got a bit clinchy in the middle there, but it sort of worked out in the end. The story of my life.
Madge: Thank you.
The Doctor: You did it all yourself, Madge Arwel. But thanks for thanking me.

Madge: Oh, Caretaker. What if I require you again?
The Doctor: Make a wish.

Reg: What the hell was that?
Madge: That was just the Caretaker returning to the time vortex. It’s a lovely place. I’ve been there myself.

The Doctor: Not absolutely sure. How long?
Amy: Two years. {she squirts him}
The Doctor: Okay. Fair point.

Amy: We’re about to have Christmas dinner. Joining us?
The Doctor: If it’s no trouble.
Rory: There’s a place set for you.
The Doctor: But you didn’t know I was coming. Why would you set me a place?
Amy: Oh, because we always do. It’s Christmas, you moron.