It is a lovely day today. This day is why I like October so much. I went to see my grandma. She has advanced Alzheimer’s. You haven’t lived until you’ve been asked 12 times within 2 hours if you’ve taken a vacation this year. She never disappoints. And I love her to pieces. Sweetest woman ever. Very quiet.

I was looking at a collage of photos she has. There’s a photo of my aunt as a young girl sitting on some steps with a squirrel next to her standing up with his front paws on her arm. It’s a cute photo, but as mom says, probably wasn’t the safest photo. Rabies, anyone?

During the war, one of his duties was to paint the side of planes. I guess there was even an article published about it, but that’s lost to time. 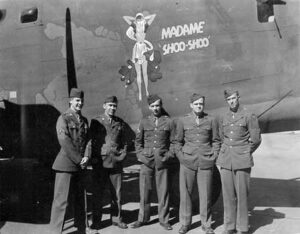 His other duty was to identify—by sound only—what type of plane was flying overhead. He was in some military intelligence unit of the USAAF. I always thought that was sorta cool.

I have his dog tags. Along with a two dollar bill signed by all the men in his unit. I even have one of those maps that they would give men parachuting into enemy territory.

Unfortunately what I do not have is an entire photo album of flak photos taken from a plane in the air over Germany. I think my uncle has those.

I also have two bullet casings from the 21 gun salute at his gravesite. He died two days before the Berlin wall fell. I’ll never forget that.

I live in Minnesota. There is a political race between Mark Kennedy and Patty Wetterling. And it’s gotten NASTY. Not on Patty’s side, but on Mark’s. He has some “I’m Mark Kennedy and I approved this message” ads of the most nastiest, underhanded ads I have ever heard in my life.

If he really approved that message, the guy’s a slug. Low-class.

And it’s not the best strategy. Patty’s son Jacob was kidnapped and most probably murdered about ten years ago. She has been relentless in trying to find out who took her son and also relentless in crusading for missing children.

Last night, I saw an ad for Patty that had John from America’s Most Wanted. He basically stated that he was a Republican, but from what he knew of Patty Wetterling, he would vote for her. I like him a lot more now.