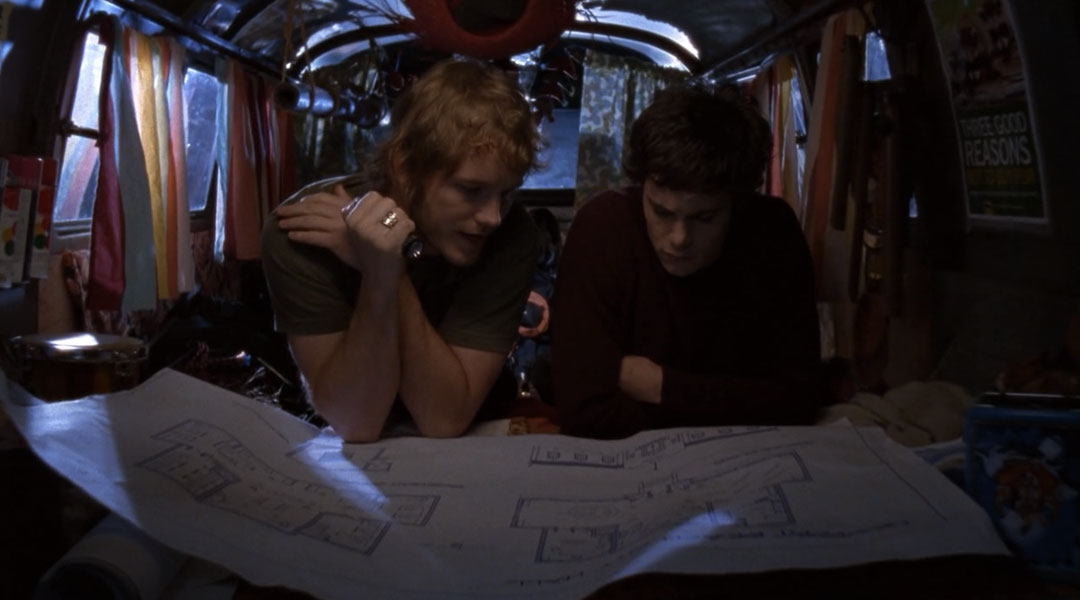 Kaitlin (Willa Holland): Five people in this house and I end up eating dinner by myself.

Che (Chris Pratt): The day after tomorrow is Groundhog Day. And I’m planning a little black ops mission to free Newport Chuck.
Summer: The groundhog?
Che: Yeah. You’ve heard of this travesty?
Summer: I’ve heard about the festival. They put him on stage with the mayor and if he sees his shadow it’s six more weeks of winter. Which is crazy considering we don’t even have winter to begin with, but I think they treat him okay.
Che: No! Three hundred and sixty-four days a year little dude is stuck in a cage, now he gets to play []. No. That’s absolutely criminal.
Summer: Okay. Just don’t involve me ’cause that’s how I got kicked out of Brown.

Seth: Listen, mom. What better way to see out your thirties than a little South Korean shock cinema?

Ryan about Kirsten: You don’t think she knows about the party?
Sandy: What? No. Are you kidding me. No one plans a surprise party like Sandy Cohen. I could have been with the CIA.
Seth: I hear they’re known for their birthday parties.

Che: Rise and shine, brother! For the clarion call of justice has rung across the land! {he rips his covers off the bed}
Seth: I’m glad I don’t sleep naked.
Che: Yeah. Me too. I didn’t think about that.

Dr. Jaines (Alison LaPlaca): And you think that you’re suffering from an emotional addiction?
Taylor: Yeah, pretty much all my life. Because I never really knew my dad and my mom is kind of like Idi Amin with fake boobs. You know, big on the torturing and the tyranny, not so big on the nurturing.

Dr. Jaines: And how has that been—this time apart?
Taylor: Well that’s kind of the other problem. Um… sometimes when I like someone I sometimes, kind of… stalk them.
Dr. Jaines: Uh huh.
Taylor: But not in like a scary Star 80 way. Just in, you know, a follow-them-around, take pictures and log their activities and then compile it all in a factually-accurate yet aesthetically-pleasing scrapbook… and it’s all really— oh my god I’m a lunatic.
Dr. Jaines: Taylor, you are not a lunatic. You recognize this behavior is not healthy and you want to correct it.
Taylor: I do. I really really do.

Bullitt on the phone: Hey Peanut. Just left the airport.
Kaitlin: We need to talk.
Bullitt (Gary Grubbs): Well not if it’s about that duty-free booze you asked me to buy.

Summer: What’s this?
Taylor: Toothpick.
Summer: Gross.
Taylor: Well he didn’t use it! Much.
Summer: Okay, Taylor. Although I wholeheartedly support you getting rid of everything in this box for purely sanitary reasons, if you like Ryan and he likes you, forget the therapist and figure out your stuff together. I mean all this just seems a little insane.

Kaitlin: You scared me.
Bullitt: Well quit hidin’ in the shadows like some Al-qaeda wacko.

Che: …and return him to the savannahs of his childhood.
Seth: I actually heard he was captured in Irvine.

Che: You realize this is the second time you and I’ve spent the night together?
Seth: So?
Che: So. Does that mean anything to you?
Seth: You’ll be going on your little adventures by yourself from now on?

Julie: You were emailing him and pretending to be me?
Kaitlin: I just know you don’t deal well with long-distance relationships. I thought you might regret it.
Julie: Really? That’s the reason? It has nothing to do with you being sick of eating frozen dinners.
Kaitlin: What, and your saying no has nothing to do with the fact you’re seeing a mystery man?

Julie: There is more to relatinships than just money.
Kaitlin: I don’t care for The Bullitt just because he’s a billionaire. {Julie eyes her.} Maybe I care a little bit.

Seth getting out of jail: Hi Dad. I hope I’m not late for Mom’s party.

Ryan: I cannot believe that you tried to steal Newport Chuck.
Seth: Sometimes the universe makes you do things that you don’t understand.
Ryan: Well Sandy didn’t seem too upset about it.
Seth: Sure. Are you kidding? He’s waited eighteen years for me to be arrested for political activism. It’s probably the proudest moment of his entire life.

Kirsten: I want you seated for this.
Sandy: Is everything okay?
Kirsten: I went to see the doctor.
Sandy: Are you sick?
Kirsten: Yes. But only in the mornings.
Sandy: What?
Kirsten: I’m pregnant.
Sandy: Wait. One more time.
Kirsten: Sandy, we’re having a baby.

Seth: It’s so weird.
Ryan: Yeah. Well, congratulations.
Seth: Yeah, it’s great. Especially since it makes me getting arrested seem trivial now, so—.
Kirsten: You got what?
Seth: Thanks for prepping her, Dad.

Seth: You guys off?
Che: Yes. To where the winds of liberty blow over the mountaintops.
Seth: So like Chicago or something?

Taylor: Were you just trying to stalk me?
Ryan: Yeah, I guess I need a little more practice.
Taylor: That is the most romantic thing anyone has ever done for me.