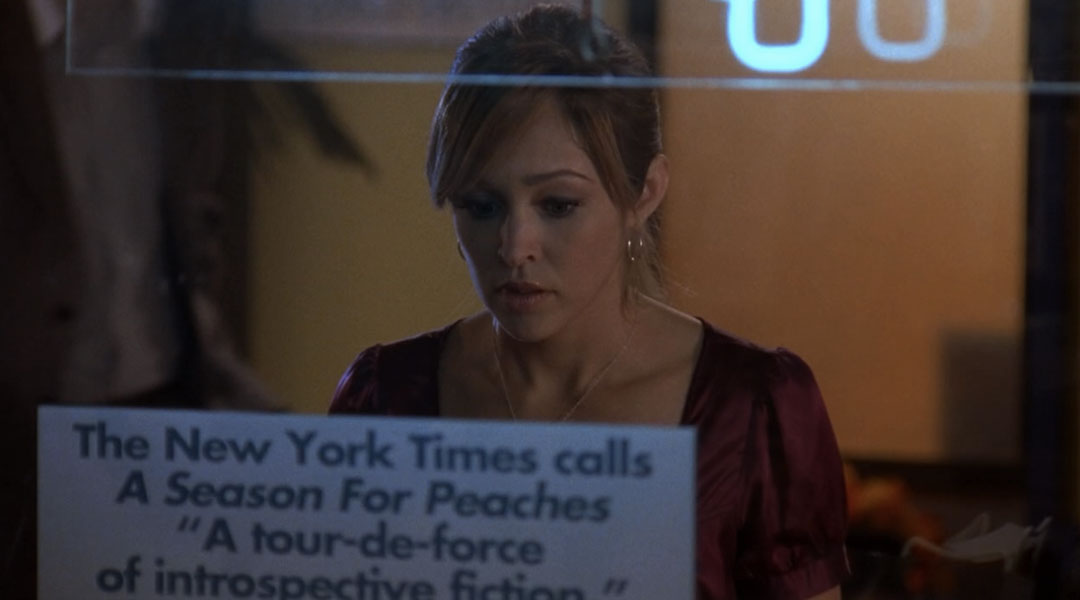 Ryan: Wow. I had no idea I was under surveillance.
Taylor: Yeah. Clockin’ your every move.

Ryan: So you’re really going to Seattle?
Seth: You wanna marry a girl, you gotta ask her father’s permission, Ryan. It’s the polite thing to do.
Ryan: Yeah except you don’t want to get married. Which you could still tell her, you know.
Seth: Not a chance.
Ryan: So you guys are really going to walk down the aisle because neither of you is willing to back down?
Seth: That’s where Dr. Roberts comes in. He rejects me, this whole game of chicken ends and I don’t have to be the bad guy.

Ryan: Good luck getting rejected.
Seth: Fortunately it’s something I excel at.

Ryan about A Season for Peaches: Your ex-husband wrote this about you.
Taylor: A novel. Not a memoir. There’s a big difference. Ask James Frey.

Summer: A Season for Peaches? You know I’m reading this. This is dirty.
Taylor: Excuse me. The girl just has a healthy sex drive.
Summer: Yeah, for a hooker.
Taylor: Would you just give me that!

Henri-Michel de Momourant (Henri Lubatti): Who shall I make it out to? A girlfriend perhaps. What is her name?
Ryan: Taylor.

Taylor: Okay, so where does this leave us because you can’t even look me in the eye. So that’s not a great sign.
Ryan: I don’t know. I… I gotta shower and get to work.

Henri-Michel: Peaches, I know I wronged you by writing this book. Let me repay this debt by mending the rift with you and your corn-fed farm boy.

Holly: I told Brett that for Christmas all I want is an African baby.

Ryan: What is Je Pense?
Taylor: It’s this literary talk show. It’s kind of like a French Charlie Rose but with less interrupting.

Kaitlin (Willa Holland): What are you doing anyway?
Julie: My cell phone wasn’t at the office.
Kaitlin: So you think it’s in the frying pans.
Julie: I checked everywhere else and I just really need it, okay?
Kaitlin: Okay. {Julie checks the toaster}

Seth: So what was that deal with the unicorn?
Neil (Michael Nouri): Well it seems the guy dressed his horse up as a unicorn for his daughter’s birthday and… things went terribly awry. But it taught us all about the value of family.

Neil: I don’t think that you really appreciate Summer.
Seth: What? Look, Dr. Roberts, with all due respect you have a lot of grounds with which to object to this admittedly hair brained idea, but there’s one thing that is undeniable is that I appreciate your daughter.
Neil: As you made clear yesterday when you called her “kinda cool” and “easy on the eyes.” You gotta do better than that.
Seth: Well she’s hilarious, for one. My favorite thing in the world is to make her laugh because she has a crazy honk of a laugh— I think Nelson from The Simpsons.
Neil: She does have a contagious laugh.
Seth: And stop me before I say she makes me a better man, but she makes me more of a man. And certainly less of a boy. I love every minute I spend with your daughter, sir, I really do.

Holly (Ashley Hartman): I was really anorexic when I wore it—not to brag.
Summer: Oh. Good for you.

Producer (Xavier J. Nathan): So you’re the friend of Mademoiselle Townsend?
Ryan: Yes. What’s happening?
Producer: They started out talking about A Season for Peaches and now somehow they are into Existentialism of the 21st century, the responsibility of the post-Colonial age, Johnny Depp. Amazing!

Henri-Michel: I would love to pick your brain on David Hume.
Ryan: Sounds great. Who’s David Hume?
Henri-Michel: Good question! I’m sure you ask yourself this every day.

Henri-Michel: After I heard about your research—traveling to Hume’s personal archive in Edinburgh—even I was impressed.
Ryan: I’m sure you were.

Ryan: You lied to make me look good, I get that. But the thing is, I think part of you wishes it were true.
Taylor: No, Ryan, please. I just want you to be yourself.

Kaitlin: Stupid winter clothing drive.
Will Tutt (Chris Brown): You may not know this, but there are homeless people that live in Newport.
Kaitlin: Really? {turns toward Newport’s homeless} Hi Darryl, Hi Bill.
Darryl and Bill: Hey Kaitlin.
Will: What do you say I give you a call when you leave here.
Kaitlin: I just can’t believe this winter clothing drive is salting my game.