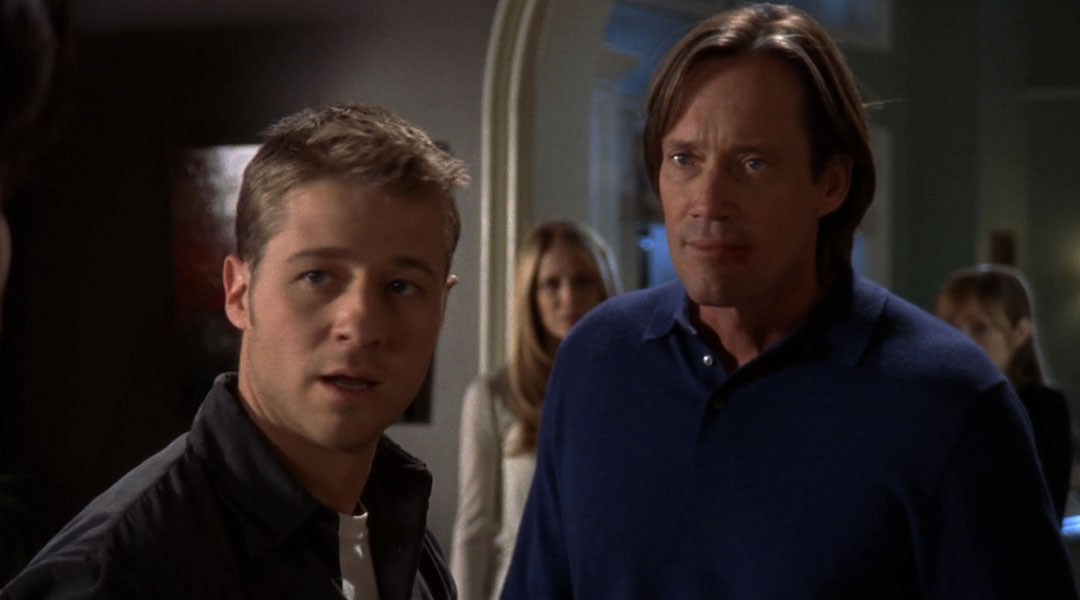 Taylor: You got engaged? Oh my god! Why didn’t you say something sooner?
Summer: Denial.
Taylor: Hm. How romantic.

Summer: Taylor, I can not break it off. You should have seen his face when he asked me. He’s never been that sincere in his entire life. Usually everything he says is laced with irony and contempt. But he meant it. So did I.
Taylor: Except you didn’t. Not really. Summer, you have to tell him how you really feel. Okay. Great. I’ve always wanted to plan a wedding. I’m thinking bagpipes. Maybe a replica of the Starship Enterprise.

Ryan: So you asked her before you looked at the test?
Seth: I was trying to be a man. A plan with a fundamental conceptual flaw.
Ryan: And now?
Seth: Well it’s not that I regret it exactly. Okay, it’s exactly that I regret it.
Ryan: Acting impulsively when your girlfriend is pregnant—believe me, I know about that. But you can’t ask Summer to marry you if you don’t want to get married.

Ryan: So just so you know, Seth doesn’t want to get married.
Taylor: Well it’s not like Summer wants to be a Desperate Housewife.

Seth: I feel good about this. I think a little long-term lifelong commitment is exactly what I needed.
Ryan: This is bad.
Seth: This is so bad.

Sandy: So you’re Ryan’s father?
Frank Atwood (Kevin Sorbo): That’s funny. I was just going to say the same thing to you.

Ryan: No shrimp tacos today. We got fish. You like tilapia?
Sandy: I love tilapia.

Ryan: You talked to him today?
Sandy: We met, yeah.
Ryan: I always knew one day he’d be out.
Sandy: He’s out.
Ryan: Yeah. Weird. And I know I’m supposed to have a lot of questions but… it’s like my dad’s from another life, it’s so far in the past.
Sandy: If that’s how you want to keep it, it’s fine with me.
Ryan: No speech about the importance of family?
Sandy: You’re my family. What’s important to me is you.
Ryan: I don’t want to see him. Maybe later, not now.
Sandy: Then that’s what I’ll tell him.

Taylor: So what are you going to do? Level with him and tell him the truth?
Summer: Frak that. He wants a game of chicken he’s gonna get it. I’m goin’ Bridezilla on his ass.

Kirsten: I appreciate you being cautious, but this seems personal.
Sandy: It is personal. Ryan is our son. Because Frank turned his back on his family. He has hurt Ryan before. I’m not going to let him do it again.

Seth: Diamonds. Sure sure. Well if we’re really doing this we better do it right.
Summer: Exactly. Which means nothing less than 2 carats.
Seth: Why not three. You’re worth it.

Summer: Oh! My brisket is burning.
Julie: I like it chewy.
Summer: Julie, I really appreciate you helping me by filling in for Rabbi Gutterman. But this just is not working.
Julie: Right. And whenever you want to let me know what “this” is, I’m all ears. As much as I’ve enjoyed learning the Hebrew alphabet with you.
Summer: This is a ridiculous sham. Not that I don’t look forward to one day becoming Jewish.
Julie: Did Seth dare you to do this?
Summer: Um, in a way, yes. We’re engaged.
Julie: Oh.

Julie: And now you don’t want to call it off because you’ll hurt his feelings. Summer shakes her head. Or ’cause if you do he’ll get the upper hand.
Summer: Exactly.
Julie: Now we’re talking my kind of dating game.
Summer: Manipulating the opposite sex. God, Julie! Why didn’t I come to you earlier?
Julie: Thank you, Summer. Look, if you want to take him down you have to kick it up a notch. It’s called chutzpah.
Summer: I think it’s “chutz”. Chutzpah.
Julie: Chutzpah.
Summer: Chutz-
Julie: Chutz-
Summer: Never mind. What are you thinking?

Ryan: You know you can stop that crazy train whenever you like.

Ryan: Dude, you can’t bring an animal in here. What are you doing?
Seth: How dare you talk to your nephew that way. Don’t listen to mean Uncle Ryan, Pancakes. That’s just the ‘roids talking. They do make him huge, I know.
Ryan: Will you get him out of here please before he ends up in a quesadilla?

Summer: C’mon. No stops, no excuses. I am marrying you tonight.
Seth: Not if I marry you first.

Frank: All I know is you’re a ballplayer. And then I go away and suddenly you’re in musicals.
Ryan: Mom had her dreams.

Kirsten: Sandy, what on earth?
Sandy: Well the good news is Frank Atwood is going to outlive us all. The bad news: my hand is killing me.
Taylor: I’ll get some ice.

Frank: I’m sorry, I’m not much of a hugger. I’m sorry about what happened in there.
Ryan: I’ll call ya.

Julie: You get caught lying about cancer, you’re gonna get punched. Those are the rules.
Frank: Yeah, I just wanted time with the kid. I think I would have said or done anything.
Julie: I understand, believe me.

Frank: This oughta keep things straight with Gordon. I think you’ll find these books are cooked so you can hide as much as you make.
Julie: Ah. The prostitution ring. No. After you busted me on New Years I made a resolution to quit. It’s hard out there for a pimp.

Seth: What are we watching?
Sandy: Well, it’s about meerkats.
Seth: Meerkats. Why are we watching it?
Kirsten: Because I wanted to.
Sandy: And we don’t want to get your mother angry. You haven’t seen her right-cross.
Ryan: Yeah. Your dad’s is pretty good though.
Seth: Well that makes sense. He was in a gang.
Kirsten: Don’t remind me.
Seth: The Jets, is what I’ve heard.
Sandy: We robbed from the poor and gave to the poor.
Seth: How many people would you say you stabbed?