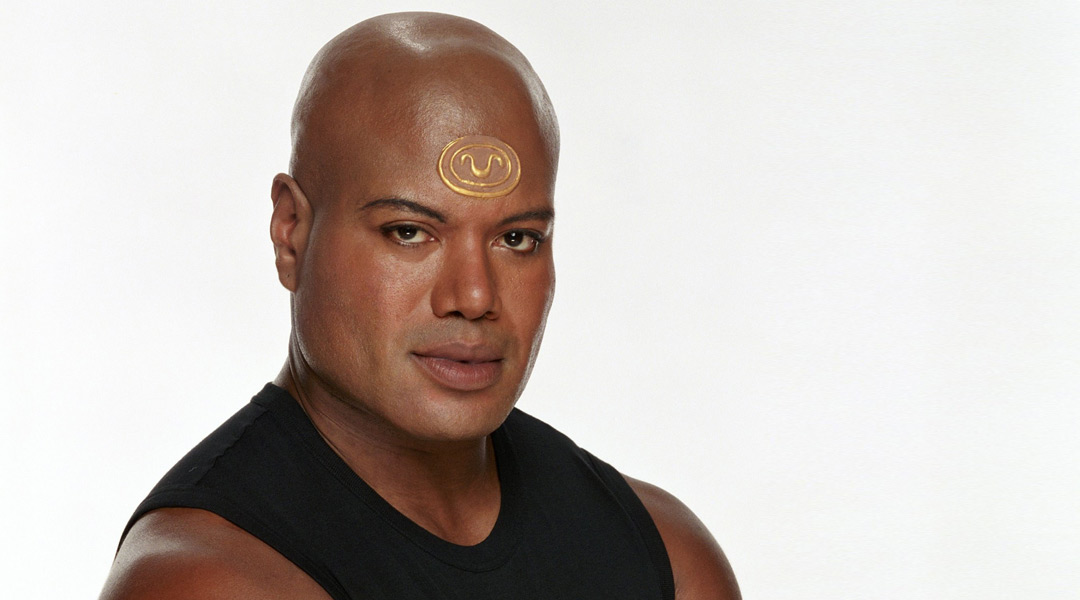 Teal’c: There is an old Jaffa saying, General Hammond. “They do not build them as they once did.”

Teal’c: Because the creatures represents Setesh, the elements of the Setesh guard have continued to be the source of many jokes among the Jaffa.
O’Neill: Jaffa jokes? Let’s hear one of them.
Teal’c: I shall attempt to translate one, O’Neill. A Serpent guard, a Horus guard and a Setesh guard meet on a neutral planet. It is a tense moment. The Serpent guard’s eyes glow. The Horus guard’s beak glistens. The Setesh guard’s nose drips. {he starts laughing… and no one else does}

Hamner: I have to prepare for the worst. If your people have been caught and I don’t act, it’s on me if they get killed.
Jacob: It won’t be on you, it’ll be on me.
Teal’c: It will reside on me also.

Teal’c: I did not attack Kronos.
Jackson: Well we believe you, Teal’c. But I don’t think anyone else is going to.
O’Neill: Certainly not those lying, scheming, no good, slimy, overdressed style mongers—
Carter: Sir. I’d like to try something.
O’Neill: I wasn’t finished.

Kalan: Colonel O’Neill. You are most punctual. Both Merrin and I are eager to participate in this exchange between our worlds.
O’Neill: Major Carter’s eager as well. She’s really looking forward to it. So’s Teal’c.
Teal’c: I will share my knowledge of the Goa’uld freely.
O’Neill: Teal’c’s eager on the inside.

Teal’c: I have vowed to battle the Goa’uld and to free my people. If I allow the symbiote that I carry to be implanted, I would be perpetuating all that I oppose.
Tomin: What happens if you do not find a host for this Goa’uld?
Teal’c: It will die.
Tomin: If the Goa’uld dies, then you will die as well? That would be unfortunate.

O’Neill: Who are you?
Aris Boch: Aris Boch. Perhaps you’ve heard of me.
O’Neill: Ah… not I. Teal’c.
Teal’c: I have not.
Aris Boch: Well that’s disappointing. I’m one of the galaxies greatest hunters.
O’Neill: Not ringing a bell, sorry.
Aris Boch: Well I know you. Captain Samantha Carter. Dr. Daniel Jackson. The Jaffa traitor, Teal’c. And Colonel Jack O’Neill.
O’Neill: Well fancy that. We’re famous.

Aris Boch: And you, O’Neill, you’re considered, well, you’re a pain in the mikta.
O’Neill: Neck?
Teal’c: No.

Teal’c: You must enter the correct combination of five.
O’Neill: How many combinations can there be?
Jackson: Oh boy.

Jackson: Most Goa’uld that we’ve encountered that have enslaved ancient human populations have taken on roles of other culture’s deities. Ra, Apophis, Hathor, from the Egyptian pantheon—
O’Neill: Yeah yeah yeah. We got it.
Jackson: Well if these people were already Christians when they were taken from Earth It suggests that this Goa’uld is playing—
O’Neill: God? As in God, God? That’s a bit of a stretch, don’t you think?
Teal’c: I know of no Goa’uld capable of showing the necessary compassion or benevolence that I have read of in your Bible.
O’Neill: You read the Bible, Teal’c?
Teal’c: It is a significant part of your Western culture. Have you not read the Bible, O’Neill?
O’Neill: Oh, yeah. Yeah, not all of it. Actually I’m listening to it on tape. Don’t tell me how it ends.

Teal’c: Your standing orders given to you by your previous Jaffa Master?
Captain Rogers: To practice the exercises of battle according to the rules of engagement until the return of our Lord Apophis. When we are ready for the final challenge, he will come.
O’Neill: Don’t hold your breath.

Forever in a Day

Carter: We were on P8X-873. We were freeing the Abydonians whom the Goa’uld had taken as slaves.
O’Neill: Kasuf sent for us.
Jackson: Sha’re was there.
Carter: Yeah.
O’Neill: She’s dead, Daniel. I’m sorry.
Jackson: How?
Teal’c: It is I who am responsible. I was forced to fire upon and terminate the life of Sha’re. Although I assure you, it was done only to save your life.
Jackson: No.
Carter: No?
Jackson: No. They have a sarcophagus. Her guards put her in the sarcophagus. She’s out there somewhere alive.

Teal’c: Is there not some form of human ritual in which I may ask your forgiveness?
Jackson: No.

Jackson: What happens if two Goa’ulded hosts have a child?
Teal’c: It is strictly forbidden. Punishable by death.
Jackson: Really? Why?
Teal’c: If two hosts were to mate and have a child, that child would contain all the knowledge of the Goa’uld.
Jackson: So the genetic memory that Goa’uld have in their DNA is passed on to the human offspring.
Teal’c: That is correct. Such children are called Harcesis. These children are hunted down and destroyed by the Goa’uld with great impunity.
Jackson: So the offspring—the Harcesis—would contain all the knowledge, all the secrets of the Goa’uld that—
Teal’c: Yes, Daniel.

Teal’c: I am sorry, Daniel Jackson.
Jackson: You did the right thing, Teal’c.

Orner: Who would give you a name like Teal’c?
Teal’c: It was given by my father. It means strength.
Layale: You remember your father?
Teal’c: For as long as I draw breath.
Orner: Then you could have not been here at the time of the Vorlix.
Jackson: Vorlix? That doesn’t ring a bell.
Layale: It was the day that all we know of ourselves was taken away.
Orner: We can only remember the days since the Vorlix. Before that, nothing.

Carter: What can you tell us about her?
Ke’ra: That she was somewhat of an apothecary. And that she did not survive the Vorlix.
O’Neill: How do you know that?
Ke’ra: The bodies of an elder woman and man were discovered some days later in a building destroyed by explosion. The only remains of our elders we have found. We deduced the male must have been Dr. Zervis. And the female matches what little description he gave in his notes of the visitor.
Teal’c: What is the name of this elder woman?
Ke’ra: It is mentioned… here, yes. She calls herself Linea.

O’Neill: I was just thinking about amnesia. Doesn’t quite track with Linea’s nickname.
Teal’c: Destroyer of Worlds.
O’Neill: Yeah. That one.
Carter: Well actually in a sick way it sort of does. I mean Ke’ra said herself that their society was on the verge of collapse despite their efforts. This world was in trouble, sir.
Teal’c: Perhaps Linea was experimenting with other ways in which to destroy worlds.
O’Neill: Variety being the spice of life and all.

Martouf: The Tok’ra believe that Sokar is about to launch a massive attack against the System Lords.
O’Neill: Isn’t that good news?
Teal’c: The chaotic and feudal disorganization of the System Lords’ fragmented rule is a far more vulnerable target than that of one powerful Goa’uld.
Martouf: Especially if that Goa’uld is Sokar.
Hammond: He’s really that much worse than the others?
Jackson: Of all the gods he picked to impersonate, he chose the Devil.

The Devil You Know

Aldwin: I’m sorry I doubted you.
Teal’c: I am surprised as you that we survived.

Fraiser: Hey Teal’c. How’re you feeling? You went a little crazy on us so we had to sedate you. Do you what happened?
Teal’c: I do not.
Fraiser: SG-1 was exposed to chemical fumes from the spill. You became delusional and attacked several people trying to escape from the base.

Teal’c: O’Neill, I presume.
O’Neill: What gave it away?

O’Neill: You sure you’re up to this?
Teal’c: As always.
O’Neill: You’re an animal.

Maybourne: What happened?
Carter: They self-destructed.
Teal’c: Their destruction appears to be complete.
Carter: That’s a lot of damage.
O’Neill: Coat of paint. Little touch-up. It’ll be fine.

Jackson: Wow. This coffee’s great.
Carter: I was just thinking that.
O’Neill: Is that cinnamon?
Jackson: It’s chickory.
O’Neill: Chickory. {Teal’c grabs the pot and downs the rest of the coffee}
Carter: Teal’c?
O’Neill: Isn’t that hot?
Teal’c: Extremely.

Teal’c: We are not wild animals.
Urgo: Speak for yourself. Big fella.

Hammond: That was our last shot, people. I’m calling this one. As of of right now I’m officially declaring him missing in action.
Teal’c: General Hammond, perhaps Edora could be reached by another means.
Jackson: That’s right, the Tok’ra could send a ship.
Carter: Or the Tollan.

Carter: Teal’c you’ll need to secure yourself above the event horizon as soon as you’re on the other side. You’ll have to carry everything you need.
Teal’c: I understand.
Hammond: I hope you do, son. Because if you fail to dig your way to the surface, this will be a one-way trip.

Jackson: What are you doing?
O’Neill: We never should have saved their technologically-superior butts. This is that thing they disable our weapons with, isn’t it?
Teal’c: As well as the Goa’uld technology.
Jackson: Don’t even think about it.
Carter: Sir, isn’t this against regulations?
O’Neill: I suppose it is, Carter. Let’s go.
Jackson: Jack, you’re crossing a line.
O’Neill: Shut up, Daniel.

Nyan: Scientific advance in either direction is still an advance.
Teal’c: You sound like Daniel Jackson.

Teal’c: What has transpired?
Bra’tac: Chulak was attacked. By Apophis.

O’Neill: Son of a bitch!
Teal’c: Apophis must have transported off of Sokar’s ship before it exploded.
O’Neill: Somebody’s gotta teach that guy how to die.

Teal’c: Whoever the builders are, they appear to be a formidable race.
Jackson: You could fit every pyramid on Earth inside this thing and still have room to spare.
O’Neill: Could you imagine heating this place?

Hammond: And if that thing zaps you to wherever it sent Dr. Jackson?
Teal’c: Then I will have succeeded in locating him.