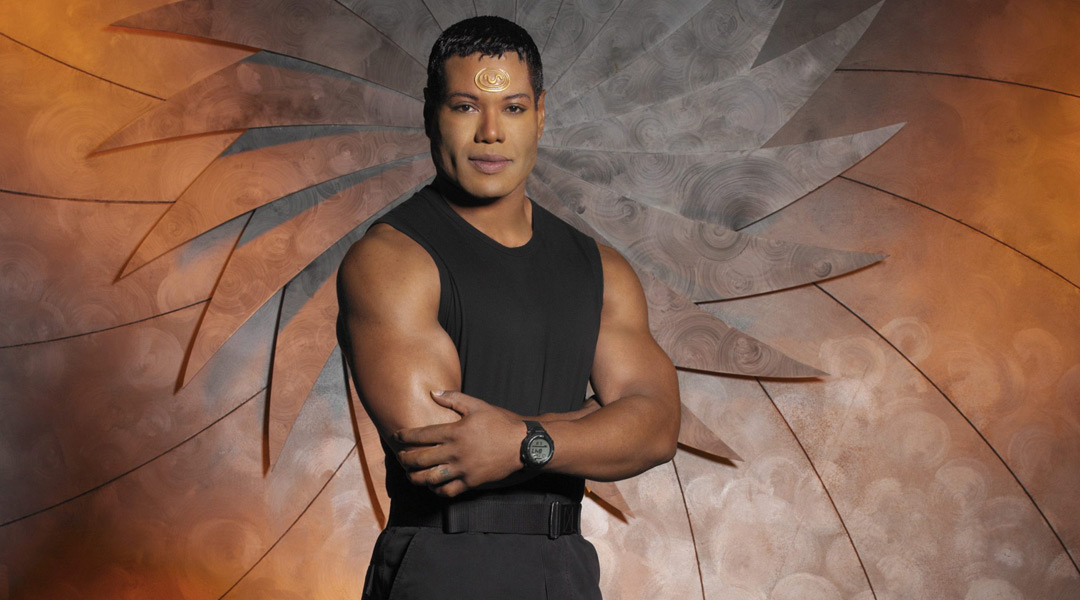 Carter: We need you here. You’re our best chance at deciphering whatever’s in that Ancient outpost.
Teal’c: If we fail, you will be O’Neill’s only hope.

Jackson: Will someone please tell me what the hell is going on?
Dr. Brightman: You’re recovering from a gunshot wound.
Jackson: What?
Teal’c: You have no recollection of the incident?
Jackson: No! Who shot me?
O’Neill: Don’t… change the subject. What do you remember?
Jackson: I went to see Colonel Vasilev and right in the middle of our conversation he collapsed.

O’Neill: You’d think that getting blasted out of orbit would have slowed the guy down.
Teal’c: According to Daniel Jackson, Anubis surrendered his mortal form when he ascended, only to be cast down by the Ancients. As a result he exists purely as an immaterial being.
Carter: See in the past when we encountered Anubis the physical form we were seeing was actually a forceshield, designed to contain his essence. When it was destroyed, that essence was released.
Teal’c: Anubis was trapped in Earth’s orbit, inhabiting debris from his ship, millions of lightyears away from his power base.
O’Neill: So he hitched a ride on a Cosmonaut?
Carter: Yes sir. And then abandoned him for Colonel Vasilev.

Teal’c: You do not represent the people of your world. You merely kill those who believe differently and would stand against you.
Soren: You speak what is on your mind. I admire that.
O’Neill: Actually in your case? He’s holdin’ back.

Soren: I can assure you, our faith is unshakeable.
Teal’c: This is not about faith. This is about a means to power.

O’Neill: How was it? Was it fun?
Teal’c: Indeed. You died well in battle, O’Neill.
O’Neill: Obviously there’s something defective with this thing.

Teal’c: You possess the ability to see into the future?
Jackson: Yeah, two seconds into the future. And to be honest with you it’s kinda freaking me out.

Jackson: I like what you’re doing with the place. Sort of Jaffa chic with a West African flair.
Teal’c: I have discovered there are many programs on television which offer advice in the area of home design and decoration.

Doug: You better check yourself. Before you get hurt.
Teal’c: I have checked. I suggest you leave.

Carter: Teal’c, how do Jaffa couples handle their problems?
Teal’c: On Chulak, a dispute between a man and woman that can not be resolved necessitates a pledge break. It must be requested by one and granted by the other.
Jackson: And if that doesn’t work?
Teal’c: A weapon is required.

Teal’c: Why not merely tell him the truth?
Carter: His personality was profiled and he was deemed a security risk.
O’Neill: For obvious reasons.

O’Neill: Fellas! How was the trip?
Teal’c: I have been betrayed by those I trusted most.
O’Neill: That good, eh?
Bra’tac: His mood is foul indeed. Greetings. It is good to see you both.
Jackson: Bra’tac, what’s going on?
Bra’tac: There was a complication.
O’Neill: Ishta?
Bra’tac: She is well. And as lovely as ever, O’Neill. The problem, I fear, lies with Ry’ac.
Jackson: Is he okay?
Bra’tac: He is in love. And plans to be married.

O’Neill: Teal’c. You there?
Teal’c: Proceed O’Neill.
O’Neill: You know how I get when you don’t call.

O’Neill: I need you to be perfectly honest with me. Is Carter letting herself get too involved in this one?
Teal’c: Colonel Carter and the replicator share thoughts and memories. It is understandable that a certain sympathy would develop between them.
O’Neill: Can’t have that.
Teal’c: However I do not believe Colonel Carter would allow these feelings to interfere with the commission of her duties.
O’Neill: Fair enough. But when the time comes, I want you to finish the job.
Teal’c: Understood.

It’s Good to be King

Carter: The Tok’ra have their hands full with more pressing matters. They strongly suggest that we get to Maybourne before the Goa’uld do.
Teal’c: If we do not retrieve him, Harry Maybourne faces certain capture. O’Neill remains impassive. Torture. Interrogation. Perhaps even death.
O’Neill: Alright, fine. Go get him.

Maybourne: Where’s Jack?
Carter: General O’Neill is back at the SGC.
Maybourne: No kidding. “General O’Neill”. That doesn’t sound right. Still, good for Jack. Nice to hear he’s doing so well for himself.
Teal’c: As, evidently, are you.

Teal’c: What is it?
Maybourne: It’s a record of this planet’s history covering all events. Only some of them haven’t happened yet.

Trelak dying from a stab wound: You are a man of your word.
Teal’c: Indeed.

Teal’c: Is it possible that Kinsey is simply lying?
O’Neill: That is always possible.

Jackson: Teal’c, the odds are not in our favor.
Teal’c: They never are, Daniel Jackson.

Teal’c: All of the hardship, the suffering, the sacrifices we have made for our cause will end today one way or another. This battle will decide the fate of all Jaffa.
Aron (Jeff Judge): This is madness.
Teal’c: So too at one time was the very thought of our freedom.

Teal’c: Surrender now and you will be granted mercy.
Ba’al: You are hardly in any position to be making such ridiculous demands. You are surrounded.
Teal’c: You are incorrect. It is in fact you that are surrounded by free Jaffa.

Teal’c: It is possible Ra simply took the device with him when he left Earth.
Carter: In which case it could be anywhere by now.
Jackson: We don’t know where it is now, but we do know where it was. Giza, 3000 BC.
Carter: You can’t be serious.

Teal’c: Are you injured?
Dr. Carter: No. I’ve just never seen anyone killed before.

Jackson: Well this can’t be a good sign.
O’Neill: Why is that?
Jackson: Where am I?
O’Neill: Ancient Egypt.
Jackson: No, I mean the me from your timeline.
Teal’c: I killed you.
Jackson: Why?
Teal’c: You were a Goa’uld spy.
Jackson: A good reason.
Dr. Carter: It was horrible.
Jackson: Yeah, I’m sure. Why are you here?
O’Neill: Yes. Excellent question.