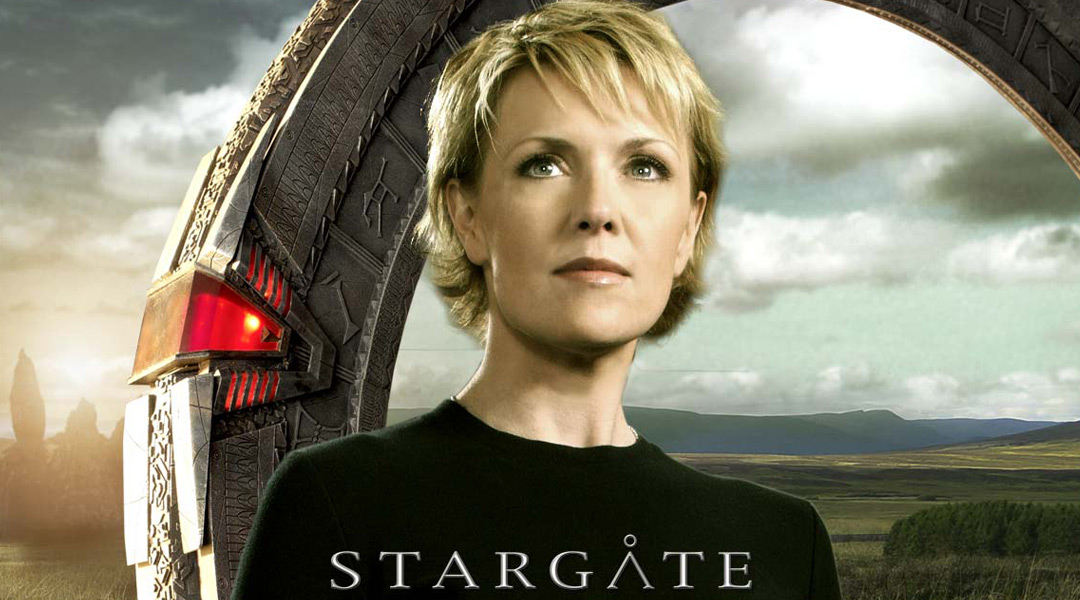 Carter hanging out in open space: I don’t know what you can see from your vantage point or what your sensors are picking up, but from out here that mothership is pretty badly damaged. I would be surprised if they were weapons capable.
Emerson: Thanks Sam.
Mitchell: They haven’t fired yet.

Teal’c suddenly stops
Mitchell: What is it?
Teal’c: Birds.
Carter: What birds?
Teal’c: My point exactly.

Rodney McKay: You may need me.
Vala: Colonel Carter said as much.
Carter: Oo. We weren’t going to tell him that.

Mitchell: It’s like my grandma used to say, “If at first you don’t succeed—”
Carter: Try a larger thermo-nuclear reaction?
Mitchell: Her words exactly.

Teal’c: Odyssey, this is Teal’c.
Mitchell: Teal’c, I thought we told you to get the hell out of there.
Teal’c: If I had done so I would be unable to inform you that the jump was successful. The Supergate is now active.
Mitchell: Are you serious?
Teal’c: There is more, Colonel Mitchell. I was able to keep the Stargate concealed until the last moment and lure the Ori vessel into the unstable vortex of the Supergate when the jump occurred.
Carter: You mean we just blew up an Ori ship?
McKay: By destroying a Wraith ship.
Teal’c: Indeed we did.

Mitchell: Has he said anything?
Landry: Only that he won’t talk to anybody but SG-1.
Carter: Lucky us.
Landry: Franky I’m inclined to let him rot.
Mitchell: That’s all right, sir. We’ll talk to him. After all he did come all this way.

Landry: You don’t think you can control her?
Mitchell: Sir, I know I can’t control her, but that’s pretty much par for the course. Sir, Carter and I are the same rank, Teal’c’s an alien, Jackson’s a civilian. I learned a long time ago I don’t control anything.
Landry: Who does.

Teal’c: Is General Landry not expecting us at his cabin?
Carter: I’ll let him know we’re going to be delayed a little bit.
Vala: I’m sure Colonel Mitchell will be very pleased to hear he’s got more special alone time with the General.

Teal’c: It is ironic that not so long ago, the mere presence of a Goa’uld on Earth have been cause for great concern.
Carter: Seriously. Who’d ever think that we’d have bigger fish to fry. Or that you’d use the word “ironic” in a sentence.
Teal’c: Indeed.

Carter: Holy Hannah! Did you see that thing?
Colonel Reynolds: You think we scared it off now?
Mitchell: No, I think we pissed it off.

Carter: A member of this facility gets kidnapped unchallenged. It’s no wonder he doesn’t think we can protect him.
Jackson: But we can protect him.
Carter: Yeah, by locking him away for the rest of his life.
Mitchell: What can you say. There’s a downside working for super villains.

Vala: What’s this?
Landry: Let’s just call it a Welcome Back present.
Vala: These are—
Landry: Team badges. You’re now officially a member of SG-1.
Carter: Congratulations. You earned it.

Carter: What’s your plan?
Jackson: We don’t have one.

The Quest : Part One

Carter: There’s a circuitous path of real time winding through the temporal field.
Mitchell: It’s a maze? It’s a maze.

Carter: You’ve had the alien database for months. Why did it take you so long to get here?
Ba’al: I can’t think clearly on an empty stomach.

Adria: Taking your life would be a waste of my time.
Ba’al: Which I suppose would be put to better use complaining.
Carter: Ugh. Geez, why don’t you two just get a room?

About the Sangraal
Mitchell: It’s the real thing this time, right?
Jackson: I don’t see why not.
It’s still a hologram
Carter: Oh come on!

Carter: I’m sorry. Are you dismissing my idea of out hand because I’m human. Or because I’m a woman?
Ba’al: A little of both, I suppose.

Ba’al: I know where you come from you’re considered relatively intelligent, but by galactic standards that’s not really saying much. wouldn’t you agree? {Carter punches him}.
Carter: You know, if you’re not going to help then you’re really not much use to us. And if you’re not much use to us then there’s really no point in keeping you alive any longer. wouldn’t you agree?
Ba’al: I’d, ah, be delighted to help.
Carter: Great to hear.

Line in the Sand

Thilana: For years my ancestors were forced to record the true history of my people in secret. Beyond the eyes of the Goa’uld. This room now houses their legacy. It seemed appropriate you do your work here.
Carter: I’m flattered.

The Road Not Taken

Carter: There must be some reason why I was brought here, of all places. I need to know what was happening in that lab.
Major Lorne: I’m not authorized to give you that information.
Carter: Maybe I could talk to Daniel. Is he here?
Major Lorne: Dr. Jackson was captured by the forces of the Ori several weeks ago.
Carter: Okay. What about Colonel Mitchell? Cameron Mitchell.
Major Lorne: The 302 pilot, went down over Antarctica?
Carter: That’s right. Is he here?
Major Lorne: I have no idea where he is. The last I heard he quit the military.
Carter: Teal’c? Vala?
Major Lorne: Teal’c went back to the Jaffa several years ago, and if you’re talking about Vala Mal Doran, I hate to break it to you but she is currently occupying a cell at Area 51. Care to take a stab at anyone else?

Dr. Lee: Major Carter was developing a process by which we could extract energy from parallel universes.
Carter: And you knew about this?
Major Lorne: Knowing and understanding are two totally different things.

Carter: The General Hammond that I know is retired from service.
Hammond: Well then he’s a lucky man.

Carter: I feel like an imposter, sir. I mean these people think I’m Major Samantha Carter.
President Landry: That won’t be a problem anymore. We’re promoting you.
Carter: That’s not the point, sir.

Hammond: You weren’t here for the riots. You didn’t see American citizens shooting each other over food, water and gasoline. Hank Landry brought us back from the brink of chaos.
Carter: That was three years ago.
Hammond: The threat is still out there!
Carter: That’s the problem. It always will be.

Carter: I’m sorry, I probably shouldn’t have come.
Mitchell: Oh no. You wanted to see it for yourself. The price of sticking up for your principals. Take a good look.

Carter: The Rodney I know is a master of subtle persuasion.
McKay: Hm. You’re lying again, aren’t you?

Vala: I’m bidding for a timeshare on eBay. {she rushes out, only to rush in a moment later} Welcome back, Samantha. We really did miss you.
Carter: Thank you. It’s good to be home.

Jackson: …so I could steal an Ori ship and fly through the supergate with an Ori weapon on board and destroy them.
Carter: Okay. Uh. One small flaw in your plan.
Jackson: I know. There’s a wormhole blocking the supergate, and that’s why I’m here. I need you guys to shut it down.

Carter: How’s it going, sir?
O’Neill: Longing for the days when I actually carried a weapon. What do you got?
Carter: A crazy idea.
O’Neill: I’m down with crazy. I like crazy. Crazy and I are like that.

Landry: If he succeeds in killing Arkad—even if he tries and fails—it will be hard to convince people that he was acting alone.
Carter: So you want us to try and stop him.
Landry: The IOA is adamant that Earth and specifically the SGC take no action against Arkad. I’ve been charged with ordering you to find Teal’c. And stop him at all costs.

Carter: Arkad is dead.
Jacek: Well he may be dead, but the threat he set in motion still exists. Take your time, there’s no pressure. It’s just that your whole planet could very well blow up at any moment.

Vala: So where are the boys tonight?
Carter: Cameron has a date, Daniel is exhausted. And Teal’c got tickets to some show…

Carter: She’s using you, Vala.
Vala: No. I would know.
Mitchell: Well you didn’t know before. Did you?

Vala: So…. No IOA? No Reynolds’ men? No television program about dancing with supposed celebrities?
Jackson: Actually that part was real.
Vala: How very disturbing.
Carter: Yeah.
Jackson: Mm hm.

Carter: I promise we will do our very best not to let you down.
Thor: You are the Fifth Race. Your role is clear. If there is any hope in preserving the future, it lies with you and your people.
Carter: No pressure, huh?
Thor: You have earned my respect and my friendship.
Carter: The feeling’s mutual.

Carter: Thanks to the Asgard technology, we are in a time dilation bubble. While time may appear to be passing at a normal rate fr us, in fact years will pass inside the bubble while only fractions of a second pass outside the field.
Landry: You won’t need that much time I hope.
Carter: Hopefully not.

Mitchell: See what we need is, we need Superman to fly around the ship really really fast.
Carter: If you only knew how ridiculous that sounds.
Mitchell: It only sounds ridiculous until you hear yourself say, “I am trapped on a spaceship stuck in a time dilation field.”

Carter: I did it.

Carter: I create the field to buy us more time. I finally figure out how to undo it all and that extra time is what makes it impossible.

Carter: You know, as hard as it is for us not knowing, it must be torture for you not to tell us.
Teal’c: Indeed.