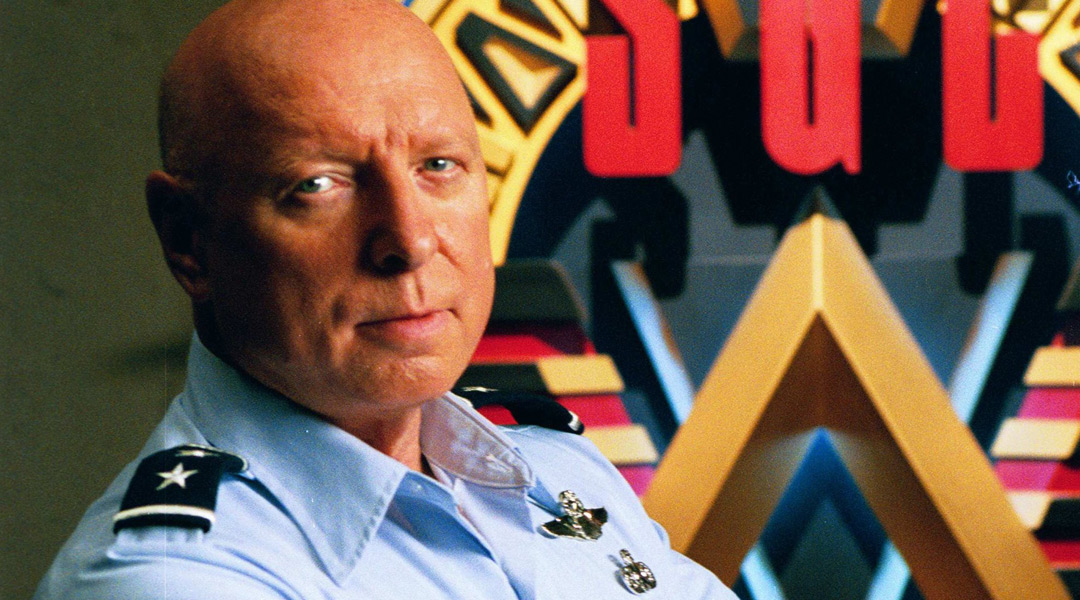 Hammond: Colonel Chekov feels that as a symbol of our joint efforts a Russian officer should be assigned to join SG-1.
O’Neill: Over my rotting corpse, sir.
Hammond: Colonel.
O’Neill: I’m sorry, did I say that out loud?
Hammond: I said I would discuss it with you and that I was sure you would give it some careful thought.
O’Neill: And that I will, General, but I’m still pretty sure I’ll say, “Bite me.”

Carter: Sir. You do realize that if this works we won’t have a Stargate anymore.
Hammond: It did occur to me.

O’Neill: You sure you want to take this with you, Sir?
Hammond: We’re closed for business. I was supposed to retire five years ago. We don’t know how long it’s going to be before we can reestablish a Stargate program, if ever.
O’Neill: Actually, I just meant it says “Property of U.S. Air Force” on it.

Hammond: How’s he doing?
Carter: We’re doing everything we can, sir.
Hammond: I spoke with the To’kra. They said this might be beyond their help but they’re sending someone anyway.
Carter: His best chance is Aiyana, sir.

Hammond: My patience on this matter has just about run out. You’ve been promising the safe return of Colonel O’Neill for days. Where is he?
Counselor Thoran: I’m afraid I am the bearer of bad news.

Thoran: The Tok’ra council accepts that Kanan may be lost to us.
Hammond: That’s the big difference between us, Counselor. We don’t leave our people behind.

Thoran: You threaten the peaceful continuation of relations between our two peoples, General Hammond.
Hammond: If our relations continue in the direction they’re going, Counselor, I don’t give a damn.

General Hammond: I must admit we were a little surprised to hear from you given the circumstances of our last encounter.
Ambassador Dreylock: I’m sure we all regret what happened. But I don’t think anything was said or done to damage relations between us irreparably.
O’Neill: You accused a member of my team of sabotage to cover up your own incompetence.
Commander Hale: And you received stolen goods and are harboring a traitor.
Ambassador Dreylock: Perhaps it’d be better if we focused on the matter at hand.

O’Neill: I have nothing against them defending themselves, but how do we know they’ll stop there?
Hammond: You sound like Dr. Jackson.
O’Neill: We spent some time together.

Carter: To tell you the truth, sir, I didn’t know what to say. She caught me completely off-guard.
Hammond: You did the right thing, Major. Our official policy is to deny everything.
Carter: Unfortunately in this case I don’t think it’s going to be enough.

O’Neill: Suffice to say you might want to get upstairs and punch one on the old speed dial.
Hammond: My grandchildren?
O’Neill: Two, then. I think the president might want to know what the Asgard have in mind for our new ship.

Hammond: Welcome home, SG-1. How did it go?
O’Neill: Oh, you know General how I love those sandy planets.
Teal’c: The wind was most pleasant.
O’Neill: Jaffa sarcasm at its finest, General.

Hammond: I take it that’s the artifact you mean. What is it?
Carter: Actually we’re not sure.
O’Neill: I’d say it’s some kind of bug zapper, General.
Carter: All I know is it’s emitting energy.

Hammond: I’m sorry to have to do this, but these men are here to escort you to Peterson. From there you’ll be flown to Andrews and then turned over to the civilian authorities in Washington.
Carter: Sir, what is this?
Hammond: Colonel O’Neill is under arrest for the murder of Senator Kinsey.
O’Neill: What?

O’Neill: General, I’ve been on vacation.
Hammond: I believe you, Jack. But for the moment we’ll have to cooperate.

Hammond: If these people are as powerful as you say they are, there’s probably nowhere on Earth you’d be safe. Fortunately, we have other options.

Hammond: Like it or not, a Russian team is operating out of the SGC. I’ve been asked to integrate them more fully into our own operations.
O’Neill: Does it have to be with my team?
Hammond: Lieutenant Colonel Evanov is a fine officer. I assure you, you’ll be in command.
O’Neill: Yes sir. I’ll remind him of that.

Jonas: I was just looking for some reference to the ship. It’s a slightly different spelling but it’s basically the same.
Hammond: Is it significant?
Jonas: I’m not sure.

Carter: Sir, if we’re right about this and Ba’al no longer has any knowledge of what’s happening on the planet, it’s possible we could free these people. If the System Lords think the planet’s worthless then we wouldn’t have to worry about someone coming in and taking his place.
Hammond: Did they ask for our help?
O’Neill: Mm, not exactly.

Hammond: Colonel, how’d you come by this intel?
O’Neill: I didn’t say?
Hammond: No, you didn’t.
O’Neill: Daniel told me.
Jonas: You saw Dr. Jackson?
O’Neill: Actually it’s not the first time.
Carter: Well is he all right?
What else did he say?
O’Neill: Woah. wait. You guys don’t think I’m… nuts or anything like that?
Teal’c: I too have recently seen Daniel Jackson.
Carter: Really?
O’Neill: Why didn’t you say something?
Teal’c: Why did you not say?
O’Neill: Well to be honest I wasn’t quite sure it was really happening the first time.