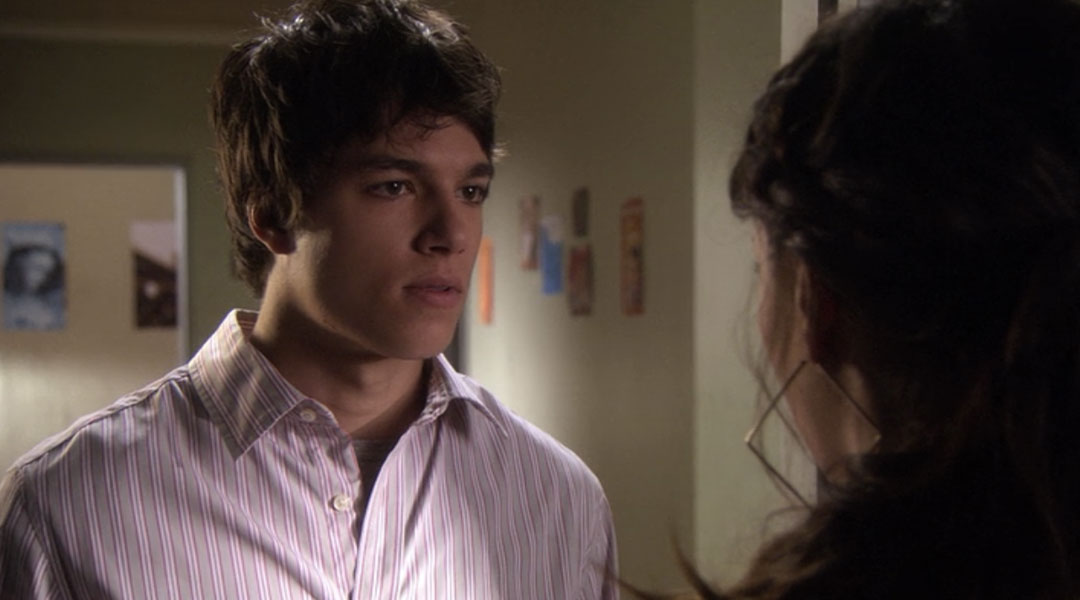 Gossip Girl: Morning in New York. Time to wake up from bad dreams, roll out of the beds we’ve made, and start making plans for a brighter future.

Blair: I know what this is. And don’t think you can run me out of my own room with a half-naked Dan Humphrey.
Georgina (Michelle Trachtenberg): Fine. Stay. Maybe you’ll learn something.
Dan: No that’s okay. I was just about to hit the trail.
Blair: It just so happens that I was on my way to a very important breakfast. I just stopped by to drop off my books and pick up my mail so feel free to hit the trail all you want. From Serena to Georgina? Quite a fall even for you.

Dan: I just mean that when you do something no one else knows about it’s kind of like you’re not even doing it. But when someone find out about it—
Serena: It becomes real.
Dan: Yeah.
Vanessa (Jessica Szohr): Well college is a time for experimentation. Psychedelic drugs. Ethnic food.
Serena: Girls who once pretended to be Sarah from Portland.
Dan: So you guys are what?
Vanessa: We are just going to tease you mercilessly.

Serena: If you want to date Georgina then more power to you. I would just check to make sure that there’s not an ice pick under the bed.
Dan: We’re not dating. We are just hanging out.
Serena: One piece of advice: you should make sure she’s knows that. ‘Cause if Georgina likes somebody she will go from zero to crazy before you know it.

Gossip Girl: When faced with an uncertain future, the questions we truly hate to ask are the ones we we fear we already know the answer to.

Serena: Where are you going?
Blair: No idea. I officially have nowhere left to go. My roommate is a nympho with a sock fetish, I have no friends at school, and now my boyfriend would rather obsess about a restaurateur than spend quality time with me. And hasn’t, by the way, in five days.

Blair: Chuck? How did you know I was here? Did you find me to apologize? That is so sweet.
Chuck: Not exactly. Though I am sorry. I know I have been all work lately.
Blair: If you didn’t find me what are you doing here?
Chuck: There’s a photograph I need that’s up for auction tonight.
Blair: Me too! My prayers have been answered. A secret collegiate society wants me. Initiation is easy. All you have to do is contribute to their Salon’s art collection as a fee, so—
Chuck: You’ve got to be kidding me.
Blair: I’m more of a Helmut Newton girl myself, but they want a vintage MacMillan. Who am I to argue.
Chuck: You see this guy in the photo? That’s Sean Macpherson. He has an entire wall of photos like this in his office. But procuring this one for him is the best way I can show him I have respect for his history.
Blair: Show him respect? He’s a club owner, not a mafia don.

Vanessa: I like you.
Scott (Chris Riggi): I like you too.
Vanessa: That’s why I’m going to give you 30 seconds to explain why there’s no Scott Adler enrolled at NYU.
Scott: Look, Vanessa, it’s complicated.
Vanessa: Let me make it easy for you. You either tell me the truth or we’re over.
Scott: I lied to you because I had to.
Vanessa: That’s not good enough.

Gossip Girl: They say honesty is the best policy.

Gossip Girl: I hope everyone’s policies are paid up, because it looks like we’re on a collision course.

Serena: If you don’t trust me then what are we doing?
Carter (Sebastian Stan): I’m not sure.

Chuck: Guess Dorota’s counter-intelligence isn’t what it used to be.
Blair: Don’t change the subject! I can’t believe you lied to me. Trying to use sex to distract me.
Chuck: I learned from the best.
Blair: That photograph is mine! Blair storms out
Chuck: She stole my shoes?

Dan: Scott Rosin. He wrote me that after reading my short story in the New Yorker.
Georgina: Fan letter? So he’s kind of like your stalker.
Dan: I guess.
Georgina: How rockstar is that?

Gossip Girl: Turns out photographs won’t be the only thing up for grabs tonight. A priceless secret is on the auction block. And the bidding begins now.

Serena: B. What are you doing here?
Blair: Eyeing a photograph that’s up for auction tonight to get into La Table Elitaire. But Chuck wants it for some business deal. Can you believe that? Putting his own happiness above mine? What kind of boyfriend does that?

Georgina: This is my kind of date.
Dan: Racing to an art auction to confront a possible stalker? Was your last boyfriend Batman?
Georgina: Admit it. You’re having fun.

Gossip Girl: Sorry Vanessa. Looks like the price of truth was just too rich for Scott’s blood.

Blair: S. What are you doing?
Serena: What are you guys doing sabotaging Carter? Three bottles of ’95 Dom on his hotel room service bill. One of your favorites if I recall.
Chuck: So we started a stealth campaign to destroy his credibility. The room service bill, the girl on the street—
Blair: The warrant.
Serena: What warrant?
Blair: Well he might want to take a DNA sample down to the 24th Precinct tomorrow.

Serena: I went looking for him.
Blair: Who?
Serena: My father. I found out he was getting remarried two years ago in Santorini.
Chuck: Finally. What happened in Santorini?
Serena: I wanted to see him but I didn’t want anyone to know. So I went to Carter. He said he had access to a boat. When the police picked us up on the way to the wedding I realized access meant stolen. Carter promised he’d make it up to me. I had no idea he’s been looking for my father himself.
Blair: And did he find him?
Serena: You know, I have to go. {as Serena leaves Blair eyes Chuck}
Chuck: Fine. I’ll call my guy at the precinct.

Blair: I’m sorry S. But it’s still Carter. Are you sure it’s worth the risk?
Serena: I don’t know, you tell me. You and Chuck are two of the most self-centered, damaged people I know.
Blair: I’m not following.
Serena: Well somehow two wrongs make a twisted right. You don’t think it was worth the risk?

Gossip Girl: In a bidding war, even when you win what you thought you wanted can be reappraised.

Serena: Does Le Table Elitaire even exist, Georgina?
Georgina: I’m sorry, but my French is a little rusty. Maybe you should start with “excusez-moi”.

Gossip Girl: Other times, old opponents resurface to raise the stakes. But it’s the things we walk away from that feel like they cost the most. And yet, it’s when we’ve been outbid—forced to watch our prize go home with others—that the rules of protocol no longer apply. I wouldn’t put you paddles away just yet. Who knows what bidders will do when they’re desperate.

Georgina: It’s Blair and Chuck. Talk about a victimless crime.

Gossip Girl: Anyone want to start the bidding on what happens next? Going once, going twice. XOXO —Gossip Girl