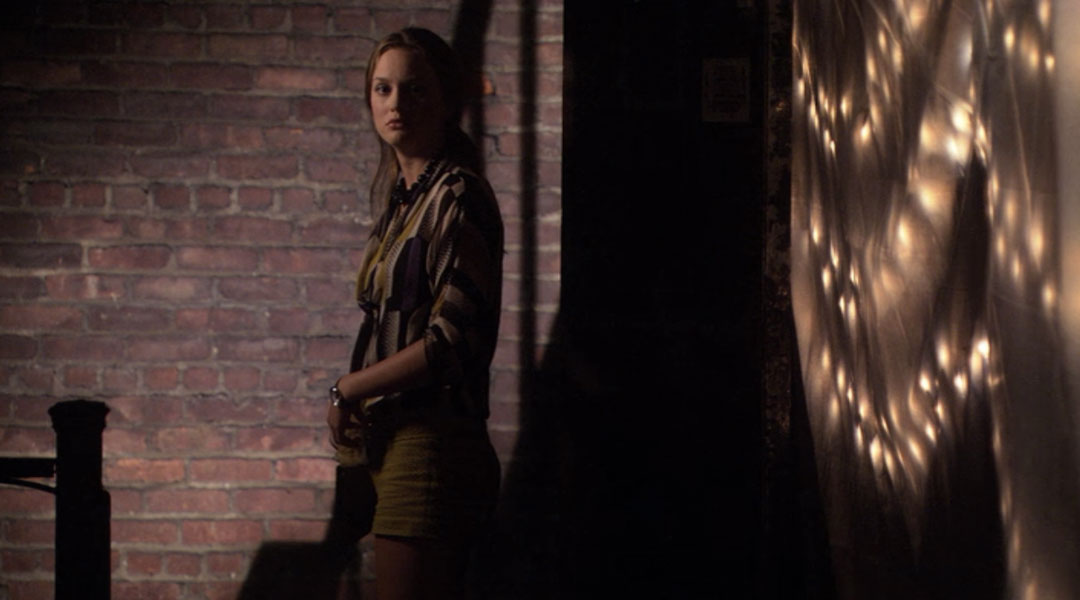 Gossip Girl: Every fall, confident high school seniors transform into nervous college freshmen. They leave their parents’ homes for the hallowed halls of education. And like any new venture, starting college holds the promise of limitless opportunity. The opportunity to conquer new territory. Or to try and be a little less lonely. But just because the opportunity presents itself doesn’t mean everybody is ready to take it.

Chuck: I have to object to you living in the dorms. Fluorescent lighting, communal showers, public schoolgirls. There’s a place for that and it belongs in the back of a video store.
Blair: It’s not for long. I can’t rule the NYU masses from the Upper East Side. I need to spend time in the dorm to establish myself as queen.
Chuck: It’s not Constance, Blair. The only queens are the ones with tickets to see Liza at Carnegie Hall.

Blair: Chuck, I trust that when you say never drink absinthe with Daniel Baldwin you know what you’re talking about. But when I say the first week at college means scared, vulnerable freshmen to guide them that I know what I’m talking about.

Blair: Let’s make it clear from the start: we don’t know each other here.
Dan: Works for me.
Vanessa (Jessica Szohr): Me too.

Chuck: Well hello sis. I assume you need a few ounces of study aid for Brown.
Serena: No. I need a place to stay. I’m not going to Brown.

Blair: I can tell from look around this room that none of you are from New York City.
Student: Actually—
Blair: Riverdale doesn’t count.

Gossip Girl: Rah rah sis boom bah. Georgina’s pulled a coup d’etat. This is going to be a blast.

Blair: So you’re not in love with Jesus anymore?
Georgina (Michelle Trachtenberg): Oh, I still hold him in my heart. But Jesus and I have redefined our relationship.
Blair: You mean he dumped you because he found out you were Satan.

Chuck: For people like us a college degree is just an accessory. Like a Malawi baby or a poodle.
Serena: Well it’s an accessory my mother really wants me to have.
Chuck: So you want to hide out at the Bass Cave until you figure it out.

Vanessa: Maybe we were a little bit too harsh.
Dan: It’s Georgina.
Vanessa: And you’re Dan.
Dan: And you’re Vanessa. This is a fun game.

Georgina: Okay, this is probably too much, but would you guys wanna have a cup of coffee with me.
Dan: Ah… Georgina, I appreciate that you want a clean slate but I think it would be too much. I’m sorry.

Bree (Joanna Garcia) to Nate: What do you say? You, me, this apartment. Let’s get sick of each other.

Blair: I’m glad people understand the concept of being fashionably late but this is ridiculous.
Co-ed: I think everybody’s down the hall watching a movie or something.
Blair: What?

Chuck: He has to answer to the board, Serena. And boards tend not to approve of coat check girls that give happy endings.

Blair: Georgina, please. Nobody wants greasy pizza and Vanessa’s home movies when there’s a sushi and sake party right in the other room. Did I mention? Wasabi facials.
Georgina: Okay then.
Freshman: And shut the door.

Gossip Girl: Spotted: Blair Waldorf. Going from VIP to VD. Poor Blair. How are you going to cure this one?

Dan: Morning.
Serena: Hey. Thanks for letting me crash here last night.
Dan: Harboring an Ivy League fugitive? I’m your man. I made you breakfast. And remember, we don’t have any servants here. So if you see anyone besides me call the police.

Georgina: This paranoia has got to stop, Blair.
Blair: I am not paranoid. I’m right. Why else would you have formed an alliance with Vanessa. The one person I may hate more than you.
Georgina: It’s not an alliance, it’s a friendship. Unlike you, Vanessa’s cool and people like her. More than the girl that threw the fish party.
Blair: Sushi! There was toro!
Georgina: Face it Blair, once upon a time in a far off land you were a queen. Here you’re just a loser who will never fit in. So you won’t be needing that.

Serena: Do you know you’re more afraid of my mother than I am.

Blair: Can I talk to you?
Dan: Yeah. What’s up?
Blair: I was wondering. Do you have a date to Georgina’s party?

Gossip Girl: Forget the Four Horsemen. The real evidence the world is coming to an end? Blair Waldorf needing Dan Humphrey to rescue her from social extinction.

Blair: Thanks for bringing me Humphrey.
Dan: Yeah well. I would just like to think if I needed it, somebody would do the same for me. Though let’s be honest, we both know it wouldn’t be you. Oh. No headbands in college, okay?

Dan: How ’bout I get us all drinks and the two of you talk. Just, not about high school. Please.
Katie (Elena Hurst): So was everyone at your high school totally jealous of Dan for being such a great writer?
Blair: Dan’s a writer?

Chuck: I told Rufus about Brown because I was actually worried about you. to the investors Sorry to have wasted your time.

Gossip Girl: Seems that Blair Waldorf has finally found Jesus. And invited Him to crash the party.

Carter (Sebastian Stan): Serena, listen to you. What’s your deal? You acting out because Daddy doesn’t love you? Is that why you skipped out of Brown too?
Serena: Please—
Carter: You know, I told you how I felt and you blew me off until you needed someone to do your dirty work. It’s time to find a new bad habit. ‘Cause it’s not going to be me anymore.

Dan: Blair what the hell are you doing?
Blair: Georgina was turning everyone against me. You were just a casualty in the battle for social dominance. But don’t worry, your loyalty has been rewarded. Your name’s on the list at the Monkey Bar. {to Vanessa} Yours isn’t.
Vanessa: Georgina wasn’t turning people against you, Blair. You tried to bribe them into being your friend with sushi parties and gift bags and nobody liked it.
Blair: I don’t need these losers to like me in order to follow me. Fear works better anyway. Dan you’ve experienced Social Siberia. If you want to try something new, I’ll see you at Monkey Bar.

Dan: I didn’t know there’s was a cool crowd at college.
Vanessa: Yeah, I think you and I were the only ones dumb enough to believe that.
Katie: Hey, so some of us are wondering if you’re going to Monkey Bar.
Vanessa: You know, just because someone has to be on top doesn’t mean it has to be Blair.

Dan: College is supposed a place where you’re not judged by what you believe or the friends you make. You’re here to make new friends. Start over. Last time I checked I think this party was pretty fun, right? Okay. So, who wants to leave with Blair? silence. Who wants to stay here and drink cheap beer with me?

Georgina: Thank you. You didn’t have to do that.
Dan: Yeah I did. Let’s go get a beer.

Gossip Girl: Uh oh, B. Looks like your new flock was just led astray. And by Dan Humphrey, no less. I guess they know a false prophet when they see one.

Rufus: If you and Eric will let me, I’d really like to be more to you than Lily’s most recent husband. Let me help you with this.
Serena: Wow. I, uh, I would really appreciate that Rufus.

Blair: There’s a reason we never went downtown. It’s awful. The minute you cross 14th Street people forget there’s a class system.
Serena: B, you will find your place. Just give it time.
Blair: No I found my place and it’s at the bottom. It’s a point of pride now that I see who’s on top. Anyway it’s all turned out for the best. If I hadn’t been so distracted I would have been able to force you to go to Brown.
Serena: That’s sweet but no, you wouldn’t have. I am sorry about the disappearing act.
Blair: I’m sure you’ll find a way to make it up to me. In the handbag department at Bendel’s.

Blair: It was so much easier when it was just about where we sat on the Met steps.
Serena: We’ve been here, done this.
Blair: I was so good at it.
Serena: Well then it’s time for a new challenge. For both of us.

Carter: What do you want?
Serena: There’s a reason I always come back to you Carter. And it’s not because you’re my bad habit.
Carter: What then?
Serena: You’re the only one who understood why I needed to find my father. You were there for me during all of that and I trust you.
Carter: Anyone would have done the same thing.
Serena: No, they wouldn’t have. And I don’t want anyone else. I want you.

Blair: You were right about the dorms. The lighting is awful. You okay?
Chuck: I am now.

Gossip Girl: Apparently higher education doesn’t make for smarter decisions. So take out your notebooks and sharpen your pencils, kids. Gossip Girl’s going to college. And this class has a lot to learn.