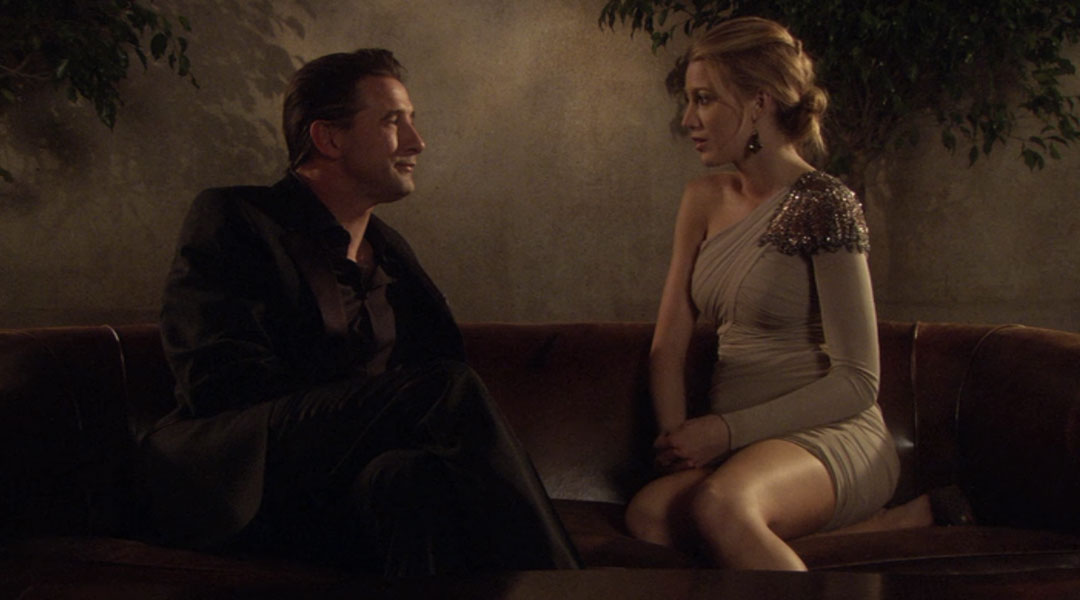 Gossip Girl: It’s said that we’re all strapped to Fortune’s wheel. Nowhere is this truer than the ever-changing landscape of love. As one couple enjoys an upswing, another is plunged downwards. But top or bottom, don’t get too comfortable. Because the one thing you can rely on is that the wheel will keep on turning.

Chuck: Judge away. Shame turns me on.

Will (William Baldwin): So I hope you’ll all join me for this Doctors Without Borders gala tomorrow at Columbia. I must admit I feel a bit silly about the whole thing. Clearly Columbia has run out of alumni to honor if the best they could come up with is me.
Eric: False humility: check.

Eric: What? He left when I was two. The man’s a total stranger to me.
Serena: You have to at least give him a chance.
Eric: No. I don’t.

Zoe (Melissa Fumero): You probably don’t remember us. But we met at your mom’s fashion show.
Blair: Yeah, of course. Hair Band Girl. I never forget a good accessory.

Gossip Girl: Better watch out, Humphreys. They say love makes a family. But on the Upper East Side, everyone knows it’s real estate.

Eric: Please stop acting like you and I have any kind of relationship.
Will: You’re right, I have a lot to make up for.
Eric: I’m sorry. The window for that closed somewhere between my twelfth birthday and my suicide attempt. Don’t worry, I’m fine now. Going through all that without a father made me realize that I don’t need one.

Rufus: Serena, please. I think it’s great that you’re moving back in but this is Jenny’s room now. All her things are here. You can stay in Chuck’s old room.
Serena: No way. That room is haunted by Chuck’s depravity. Jenny can take it. I’m sure it wouldn’t bother you.

Serena: How many problems does Jenny have to cause before you realize she’s the problem?

Dan: Did you apply for a documentary internship in Haiti?
Vanessa (Jessica Szohr): Yeah. The producer just called. I got the job.
Dan: When were you planning on telling me about this?
Vanessa: This morning. And then you put internships on the “Do not discuss” list and I panicked.
Dan: Why? This is not about competing for something. This is about our relationship.
Vanessa: But both of those have been so tied up in each other. And this job is a huge deal for me, Dan.
Dan: You can’t pretend like you going away for three months is not going to affect us.
Vanessa: I think I didn’t want to face that. It was just so much easier when we were just friends and we could talk about things.
Dan: Alright. So is that what you want, then? You wanna go back to just friends.
Vanessa: I don’t know.

Lily: I’m sorry if this is uncomfortable for you, but if William wants to move in to be closer to his kids, I’m not going to stand in his way.

Blair: Apparently Jenny Humphrey’s claiming squatter’s rights on her old room. It’s disgusting.
Zoe: Oh my god Jenny can’t do that to Serena van der Woodsen.
Amalia: So what’s the plan of attack?
Blair: It’s between Serena and Jenny. Anyway I had some bad luck recently getting in a real estate dispute.

Amalia: I told you. Blair Waldorf was over the minute she became a student at NYU.
Blair: Are you third-personing me? I third person people, not you.
Zoe: Exactly. You’re Blair Waldorf. Fashion icon. Queen B. And probably the future president of the United States. Or Chanel. Jenny Humphrey just kicked Serena van der Woodsen out of her room and you’re not going to do anything?
Blair: I would. I just don’t have any dirt on Jenny right now.
Amalia: Ahem. I do. Jenny and her boyfriend sold my boyfriend Adderall a couple of months ago. Lose the judge face, Zoe. He took a very heavy course load that semester.

Blair: Jenny Humphrey, drug dealer. I can work with that.

Gossip Girl: We hear Blair Waldorf’s headed for a comeback. But if she wants to keep her friends happy, she better keep serving up the hits.

Serena: You are the one who played Pablo Escobar to underage preppy pill-poppers.

Nate: You never made it to my lacrosse game yesterday. What are you doing?
Blair: I could ask you the same question. Does Serena know you’re trying to pull off plaid?
Nate: Seriously, Blair. I expected Chuck to go back to his old habits after your breakup but I thought you had grown up a little.
Blair: Whatever do you mean?
Nate: Blair Waldorf on the Upper West Side two days in a row. Pretty much looks like you’re pretending to be a Columbia student.

Blair: We’ve broken up, Chuck. And frankly I don’t care what you do. But I can’t sit by and just watch you avoid Lily.
Chuck: I’m actually quite busy with my work.
Blair: Well you had time for Nadine.
Chuck: Trust me, she was work. And I promise you, Lily is not sitting around wondering when she’s going to hear from Chuck Bass.
Blair: Justify not seeing Lily all you want. You and I both know what this is. You’ve lost Bart, Elizabeth betrayed you, and the thought of losing Lily terrifies you.
Chuck: Please. Spare me your NYU freshman psych analysis. Perhaps if you were at an Ivy you’d have better insight.

Gossip Girl: Spotted: B, claiming to be a co-ed at Columbia. When everyone knows she’s a zero at NYU. Poor B, first she lost Chuck and now her dignity.

Blair: Look, Chuck, sleep with every Nadine in town for all I care, but don’t close your heart to Lily. You and I both know that in the end the person you’ll end up hurting the most is you.

Gossip Girl: You make your bed, you lie in it B. Too bad yours is in the East Village.

Chuck: I want to apologize. My absence has been inexcusable.
Lily: Well I know my situation brings up a lot of issues for you. You’ve had to deal with so much loss.
Chuck: I’m not going to lose you. I’m here for you. Every step of the way. You look good, Lily. In fact you look better than good. You look great.
Lily: Thank you. I feel great. So you had better be prepared for a lifetime of family brunches because I’m not going anywhere.

Gossip Girl: Ah! Serena finally has the perfect relationship with her daddy. But will her dream-come-true be Rufus’ worst nightmare?

Nate: Are you all right? You’ve got crazy eyes.

Eric: You’re not at the gala?
Rufus: I thought it’d be best for everybody if I didn’t go.
Eric: Ah, I see my father is still working his magic.
Rufus: It’s not all him.
Eric: Yes, it is. It’s just that no one else sees it. You make my mom happier than all of her ex-husbands combined. It should be you with here tonight, not some guy who pulled a disappearing act.

Gossip Girl: My oh my, did Dr. van der Woodsen just make a public pass at Rufus’ wife? Looks like this doctor without borders needs a few boundaries.

Gossip Girl: Listen carefully, S. Holland has a story to tell. Apparently her upstairs neighbor has been coming downstairs.

Blair: I think you girls got some misinformation. I will be attending Columbia in the fall.
Amalia: Oh. That’s awesome.
Zoe: We have an extra room in the apartment. Maybe you want to move in with us.
Blair: No. I don’t live with the help. Oh! And you wanted to see a Blair Waldorf takedown? Well cross me again and you’ll experience one firsthand.

Gossip Girl: They say that family are the people that will always take you in, but if instead they shut the door? Or even worse, let someone else take your place. What do you say, Serena? Who’s your daddy? XOXO —Gossip Girl