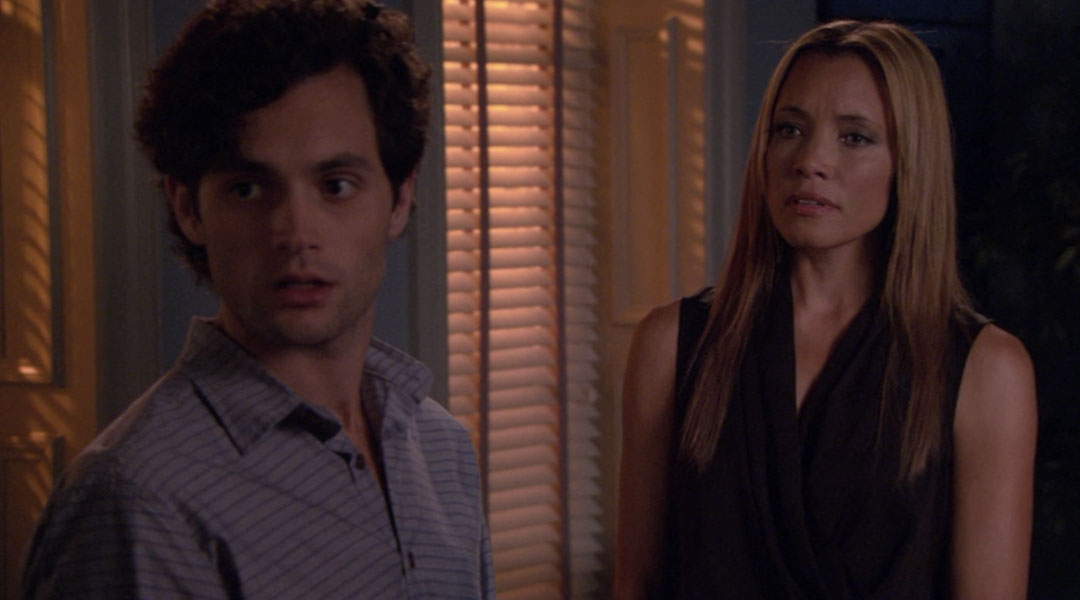 Gossip Girl: On the Upper East Side, it’s not what you say that determines who you are. It’s what you do.
Blair: I hope they take it well. Nothing matters more than our child being born into a big happy family.
Louis (Hugo Becker): Are you ready?
Gossip Girl: Whether you’re making a big announcement… or trying to close a deal.
Serena: Hey. Jane.
Jane (Michael Michele): Did you lock up the film option for Dan’s book yet?
Serena: No, I just finished reading it unfortunately.
Jane: Need I remind you this is your chance to make up for blowing the Daniel Day Lewis deal.
Serena: No reminder necessary. I’m on it.
Gossip Girl: Or firing the first shot.
Diana (Liz Hurley): The site goes live in twenty!

Cyrus: Well whatever it is, I’m just so thrilled that it’s happening on Yom Kippur. And I hope the two of you will stay to break the fast with us. As I recall you’re quite fond of smoked salmon.
Sophie: I am! And we would love to.

Sophie: Alors. La nouvelle?
Blair: We’re going to have a baby.
Eleanor: A baby?! You’re still in college!
Blair: Mother.
Cyrus: How wonderful!
Eleanor: Wonderful? It’s a— wonderful… surprise. What is the record for youngest grandmother on the Upper East Side? Cyrus, I don’t think I’m going to be able to make it to sundown without eating.
Sophie: I am thrilled without reservation! As long as the baby is born after you are married of course. The last thing this family needs is another bastard.

Blair: Thank you for keeping my secret.
Beatrice (Roxane Mesquida): What are sisters for.

Rufus: I’ll make dinner tonight and we can hear all about your first day.
Lily: You don’t want to go to the breakfast at the Waldorf’s?
Rufus: Not really in the mood.
Lily: Oh. Isn’t that ironic. The state lifts my house arrest and you lock yourself up.

Lily: You know the only way you’re going to get out of this funk is to sit down and listen to what he has to say.
Rufus: I’m not ready yet.

Chuck: I have to say, when you asked me where you could buy vintage magazines this isn’t what I thought you were talking about.

Chuck: Humphrey, I’m feeling like my old self again.
Dan: Me too. Although not in a good way. I really thought the days of everyone turning their backs on me were over.
Chuck: Well, at last this time it’s because they hate you and not because they don’t know you exist. Be patient. Soon your literary misdeeds will be forgotten.

Gossip Girl: Imitation might be the sincerest form of flattery, but stealing is an outright crime. And that’s what a new rival has committed when cell phones disappeared and reappeared at the Jenny Packham show.

Nate: Listen, if we launch now everyone will know she’s talking about you.
Diana: Not necessarily.
Nate: No, it’s too big of a risk.

Serena: I may have overreacted about how you portrayed me in the book.
Dan: Thank you so much. You know I have to admit it’s been kind of hard. My dad and Nate and Blair still won’t talk to me.
Serena: Well things are looking up then. One down, three to go.
Dan: Never thought you’d be the first.
Serena: I am full of surprises. You know that.

Serena: Hey Jane. I swallowed my pride and outrage and did what you asked. We should have Dan’s book later today.

Diana: And you had me believe crazy was just an act? I think you might be suicidal.
Charlie (Kaylee DeFer): What are you talking about?
Diana: You start work here under—shall we say—duress, and within five minutes there’s a catastrophic leak to my competitor.
Charlie: Diana, I swear it wasn’t me.
Diana: Since you lie like most people breathe, your oath means very little. Don’t forget, my biggest story is you.

Gossip Girl: Yom Kippur at the Waldorfs will truly be a high holy day, now that Her Royal Highness Princess Sophie has jetted in from Monaco for a bagel and a shmear.

Diana: If I were you I’d have left by now.

Alessandra (Marina Squerciati): Public television is the last bastion of the intellectual. If this goes well, Charlie Rose could be next.
Dan: Oh, that’s a good tactic. Piling on the pressure right before your already-prone-to-nervous-rambling client goes on live television for the first time.

Dr. Eliza Barnes (K.K. Moggie): It’s obvious that you’re deeply troubled and I would be more than happy to help if you were truly interested—in therapy. Now if you’ll excuse me, I have Yom Kippur services.
Chuck: Oh. You’re Jewish.
Dr. Eliza Barnes: Not that that’s any of your business, but I converted.
Chuck: Well that’s probably a smart move in your line of work.

Jane: Why are you gossiping when a deal you’re running point on is falling apart on live television?
Serena: I’m sorry. This is Blair, my best friend. I figured maybe she could help.
Jane: This isn’t high school. This is my business. I told you not to embarrass me.

Blair: I have an idea for you: quit. Your boss is a bitch. Let’s go to lunch.
Serena: My job is important to me, B. You have six months to deal with your problem. I have six minutes to deal with mine. Goodbye.

Blair: Yes. If everyone else is moving on with their lives then I’m ready to do the same. All the way to Monaco. You’re my family now, Louis. And I want to be yours. Tell your mother that I’m going to be a Grimaldi and I intend to live like one.

Nate: What are you going to do?
Chuck: Take an interest in what matters to Dr. Barnes. Shalom.

Lily: An evening of friends and kugel is just what we need.

Jane: Maybe your good friend F. Scott Fitzjackass {ugh} had you nailed in the book. If something doesn’t fall right into your lap, Serena, you don’t have a clue how to work for it.

Gossip Girl: Sometimes all it takes to cross a line is a little push.

Rufus: Since I’m feeling a little raw on the family front, if Eleanor refers to you as Lily Bass again I can’t promise I won’t return fire.
Lily: I dragged you here, and you have my full blessing to go Sean Penn if need be.

Cyrus: And furthermore it says that if you break any of these rules you face the possibility of losing custody of your child to the royal family.
Blair: What? Wait, that’s—
Louis: Outrageous.

Sophie: The clause stays. If you two cannot accept this, then I will not acknowledge the child as my heir. Nor will I acknowledge you.
Louis: You don’t have that right anymore. As the future reigning prince, it’s up to my child to acknowledge you.

Charlie: This is the mother lode. The biggest secrets of the Upper East Side. Even one of these would not only launch the web site but blow Diana’s mind.
Nate: And my ethics. These are my friends. Now that I’ve actually done this, I don’t know what I was thinking.

Nate: These might be my friends but they’re your family. And you’re acting like you barely know them.

Dr. Eliza Barnes: You asked for my professional opinion and now you’re going to get it. You never had a childhood and now you behave like a child in the worst ways. You pay for intimacy so you’re always in control and no one can get close to you. Your superficial connections and lack of authentic emotion leave you isolated and alone. Not just tonight. Always. I wish you all the best, but you’re going to need more than that to live a happy and normal life.

Serena: I followed Jane all the way done to her town car apologizing, and even then I don’t think it was enough. Thank you for waiting.
Dan: I didn’t want to. You scared away everyone, and now no one wants the book.
Serena: Dan—
Dan: Your apology this morning was just strategic, wasn’t it?
Serena: Yeah. Pretty much.

Serena: I finally finished the book.
Dan: I told you, it’s not you. Yes, there are parts of you. And Daisy Buchanan. And Amy March. And Gwyneth Paltrow. Five different roles she’s played. But it’s a novel. It’s inspired by a lot of things. It isn’t speaking to some deeper truth.
Serena: Are you sure? Because I know this may sound crazy or selfish or… like I’m living in the past or something. But you were the love of my life, Dan. I don’t know, I just thought I was yours too.

Gossip Girl: That’s the thing about writing what you know. Soon everybody else knows it too.

Charlie: And thanks again for helping me do nothing.
Nate: Well it was fun breaking into the safe.

Eleanor: I have to confess that I may have been the one to put the idea of a contract in Beatrice’s head. I was just bragging about you and it didn’t matter where you lived. No one can keep you from being your own person. And that is part of why you will be a wonderful mother.
Blair: Thank you for saying that. I know this isn’t what you wanted for me. At least not yet.
Eleanor: These things happen when they happen. That’s the first lesson of being a parent. Children don’t do what you want them to do all the time, when you want them to do it. But you love them anyway.

Lily: Well I bet you never thought you’d hear such good parenting advice from Blair Waldorf.
Rufus: It’s time to let my anger go and return Dan’s calls. I mean if he didn’t piss me off it would just mean he wasn’t growing up.
Lily: That is the Rufus Humphrey that I love.

Serena: When you told me you were pregnant I said that I would be there for you, no matter what, and I haven’t been. And I’m sorry.
Blair: Well you had a work crisis.
Serena: Yeah, but the truth is I was jealous.
Blair: Well if it makes you feel better marrying a prince isn’t what fairytales would lead you to believe.
Serena: No, that’s not what I was jealous about. You’re the star of Dan’s book.
Blair: Well as I said, it’s pure fiction.

Dan: Without you inspiring me from the beginning I wouldn’t have been able to write anything, so I owe you one. And despite the events of the day, you know, I trust you. I do have one condition: I want to write the screenplay.

Gossip Girl: As challenging as atoning can be, the rewards make it worth the sacrifice.

Chuck: Everything you said to me was true. I don’t need another notch on my belt. I need help. I knew it last week—hell, I knew it last year. I know it now. I’m ready to be serious if you’ll have me.

Gossip Girl: But the most difficult part can be admitting there was a sin to begin with. Most people find it too hard to face their crimes and find it easier to pretend nothing ever happened.

Gossip Girl: The problem with hiding your sins is they always come back. On the day when some have atoned for past transgressions, a once-pure Prince can’t help but commit a new one. XOXO —Gossip Girl