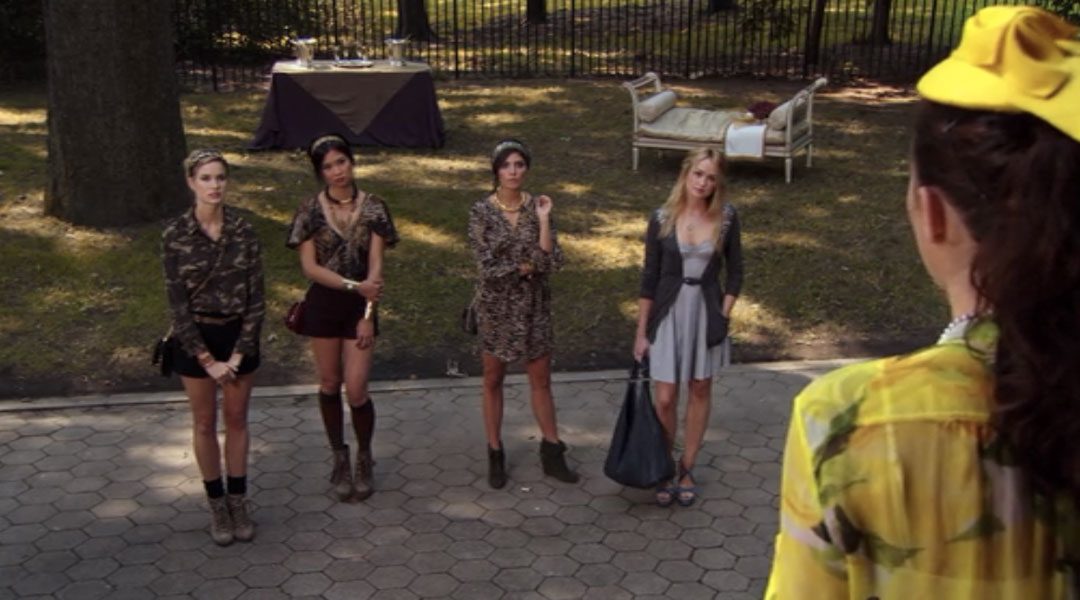 Gossip Girl: They say the road of life is long and winding. So it’s important to mark the milestones along the way. from picking your bridesmaids—.
Dorota: So many minions. How are you ever going to decide?
Blair: Tryouts begin after breakfast.

Diana (Liz Hurley): Nate. Can I add one more thing to your to do list?
Nate: Definitely.
Gossip Girl: To christening your boss’ new desk. Landing on your first bestseller list—
Dan: Number nine. Inside by Daniel Humphrey. What did Lincoln Hawk’s first single debut at?
Rufus: Eight. Ah, but don’t pay too much attention to that stuff that was the 90s.
Gossip Girl: —To finally asking for help.
Dr. Eliza Barnes (K.K. Moggie): So how are you feeling today?
Chuck: Fit as a fiddle.
Gossip Girl: But keep your eyes on the road, Upper East Siders, or you could get lost along the way.

Chuck: The dream starts the same every time.
Dr. Barnes: They have a habit of doing that.

Chuck: How can you be so sure I’m hiding something?
Dr. Barnes: Maybe I’m wrong, but I feel there’s a piece of the puzzle still missing. It’s not your mother or your father. It’s someone you’re not telling me about.

Louis (Hugo Becker): Why do I feel there’s a request coming?
Blair: Not a request. A special dispensation.
Louis: For what?
Dorota: Scheming and manipulating.
Blair: Who do you work for? Louis, can’t you just turn a blind eye for… let’s say twenty-four hours.
Louis: Blair—
Blair: All I’d be doing is spending the day with my former minions. Maybe some light water boarding involved.

Blair: Don’t worry, my love. Nobody will get hurt. Not badly.

Blair: As faithful minions through the years, you’ve each earned a chance to be immortalized as a bridesmaid in my royal wedding. But legally I must warn you not everyone will survive the tryouts.

Blair: Where’s Nelly Yuki?
Penelope (Amanda Setton): Yale. Where she got in and you didn’t. Plus she hates you, remember?

Dr. Barnes: What’s this?
Louis: The rest of what I owe you. I told you it’d be worth your while. Now you can settle all of your father’s debts.
Dr. Barnes: What do you want me to do?
Louis: Just make sure my fiancée will never ever fall for him again.
Dr. Barnes: Louis, that’s up to Blair.
Louis: No. It’s up to you. To turn Chuck back into the monster he was for the first twenty years of his life. He’s a time bomb. Find his fuse and light it.

Gossip Girl: Looks like Louis is about to make Young Bass’ road to recovery a very bumpy ride. Better buckle up, Chuck.

Dr. Barnes: You have to face that you didn’t let Blair go, you lost her. To someone else.
Chuck: You don’t know what I did. But yes, maybe there is something I need to do if I’m ever going to move on. I don’t want to lie to you, I don’t want to lie to myself. {he retrieves the Harry Winston engagement ring} If I’ve really let Blair go, I don’t need this anymore.
Dr. Barnes: It’s beautiful.
Chuck: I bought it to give to her. I’ve been keeping hold of it ever since. When really what I should do is just return it.

Serena: So Mr. Screenwriter, are you ready for your first development meeting?
Dan: I think so. As long as you guys don’t want to change the ending. Or the beginning. Or all the stuff in the middle.

Jane (Michael Michele): We’d love if you could open up the world of the Upper East Side a little bit more.
Natalie (Kristin Villanueva): Rich people are so hard to like. Maybe you could add someone more relatable.
Dan: I thought I did that already.
Serena: I think Dan is referring to his main character, Dylan Hunter. He’ll appeal to everyone. He starts off as an innocent from Brooklyn.
Jane: Who quotes Hawthorne and screens Fellini films? I don’t think so.

Jane: Another thought that occurred to me was to Glee this up. Music. Maybe originals. Or covers.

Blair: Dressing me for my wedding day means attending to my every need, no matter how big or small. Adjust for reception! Cinch that train! Penelope! She has to pee!
Dorota: Where secret wedding location?!
Penelope: We don’t know!
Dorota: Who designed Miss Blair dress?!
Jessica (Alice Callahan): We can’t tell you that!
Blair: Good one Jessica. Now block that baby bump!

Dan: Whatever Jane sent you here to say, why don’t you just say it.
Serena: Well we both think that you should waive your right to write the script.
Dan: Why would I do that?
Serena: Because if you write it your project will be stuck in development hell.

Dan: But how can I guarantee that she’s not just going to screw it up?
Serena: Because I won’t let her. She may not know this world, but I do. And I will protect your story and you.
Gossip Girl: Careful, S.
Dan: I have your word?
Serena: You have my word.
Gossip Girl: Everybody knows the road to hell is paved with good intentions. And shady bosses.

Jane: Inside will be the next Social Network. We’re gonna Zuckerberg him.
Serena: Jane, this is unfair.
Jane: I prefer to let the audience decide what’s fair or not.
Serena: Dan is not like that. Why don’t I put a dinner on the books for all of us and this way you’ll see.
Jane: The next time I see Dan will be at Cannes when I’m shaking his grateful hand on the dais.

Gossip Girl: Spotted: S trying to navigate a slippery slope. But she’s not the only accident waiting to happen.

Gossip Girl: When you drive Chuck over the edge, it’s you who will wind up road kill.

Louis: How was your day?
Blair: Just what I needed. Old habits die hard.
Louis: If they die at all.

Jane: Did you already tell him we got Sorkin to write the movie?
Dan: What? No. That’s incredible.
Jane: I know. Now your character will talk even faster than you do.

Serena: I gave Dan my word that I would protect him. He’s one of my best friends. Please, don’t do this to him.
Jane: It’s already done. And you know what? I’m taking you off this project. Effective immediately. Like Dan you’re just too close to it.

Diana: Jane and I have history. She doesn’t always like to be reminded of it, but it’s been awhile since I did.
Serena: What kind of history?
Diana: Some things are best left to the imagination. So, how bad do you want your problem to go away?

Dan: I was hoping we could talk more about the movie.
Jane: What movie. It’s dead. If you want to know why, talk to your friend Serena.

Louis: The paternity test showed me that some part of you thought you might still have a choice to make, and I needed you to see that Chuck would always be the wrong one.
Blair: Louis, I don’t now how many more times I can say this, but Chuck and I can never work.
Louis: You know that for certain?
Blair: I do. So does he. And so should you. Chuck destroys everything and everybody in his life. And he’ll never change. But what’s scaring me is that you’re changing into him.

Nate: What, so you used me to get a story?
Charlie: The girl you’re seeing is your boss?

Dr. Barnes: I understand you’re angry. I don’t expect you to ever forgive me. I just thought you should know Louis wasn’t paying me for information alone. He wanted me to drive you into a rage. To turn you into this monster you apparently used to be. Louis is so threatened by you that he wanted to remind Blair—
Chuck: Why she chose him. Maybe Louis’ right.
Dr. Barnes: He doesn’t have to be. You can change.

Dr. Barnes: You chose to let go. Continue down that road and I’ll bet you find some peace.
Chuck: I’ve always wondered what that’s like.
Dr. Barnes: Good luck. And I’m sorry. I really did want to help.

Gossip Girl: Spotted: Chuck Bass, standing at the crossroads. Looks like we’re going to have to watch his every step.

Diana: Aren’t you tired of swimming in Gossip Girl’s fishbowl?
Serena: Well I’d have to do it my own way.
Diana: I’d expect nothing less.

Blair: I hope never giving up on people isn’t going to be my downfall.
Chuck: That’s why you’re going to be an amazing mother. You’re always there for the people you love. Even when they don’t deserve it.
Blair: You know that’s never going to change.
Chuck: It’s okay if it has to. Starting tonight I’m going to take care of myself.
Blair: Is that all?
Chuck: Yeah.

Gossip Girl: They say every road comes to an end, but sometimes the end feels just like the beginning. Even when you think you’ve come a long way—

Gossip Girl: —you can suddenly find yourself right back where you started. Because every journey is fraught with twists and turns.

Diana: I’d hate to run a story tomorrow about a poor girl from Florida who Clark Rockefeller’d the Upper East Side.

Gossip Girl: And one false step could spell disaster. But no matter what, you still have to stay the course and forge your own path. Because there’s no going back now. And it looks like this one’s going to be the ride of our lives. XOXO —Gossip Girl.