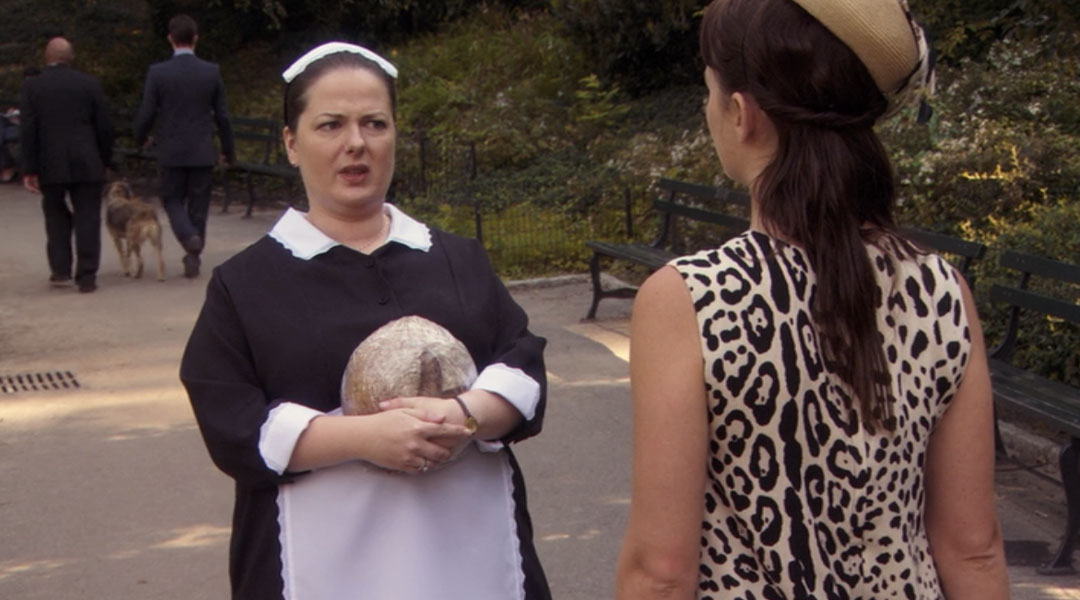 Gossip Girl: Good morning, Upper East Siders. Or is it? We hear a certain future royal has had more than one rude awakening this week.

Dorota: Uh oh. Mr. Chuck in dream again.
Blair: When Chuck’s in them they’re all nightmares.
Dorota: What he do now?
Blair: Behave like a perfect gentleman. Which makes him even more chilling. That fake apology of his has permeated my subconscious and haunts me even when I sleep.
Dorota: Apology not seem so fake to me.
Blair: That’s because English is your second language!

Blair: Grab the bread. Not even Chuck’s media mind games could disrupt the calm I feel off feeding the ducks. Besides, you could use the exercise.
Dorota: I’m pregnant too, remember?

Nate: Please tell me you’re not just getting home from yesterday. Did you spend all night with Zarkana again or what?
Chuck: Early morning charity event meeting.
Nate: Is that what you’re calling it now? Charity.

Chuck: If Diana won’t commit to you in public like she does in private maybe it’s time to explore your options.

Rufus: People who still go to book stores are real readers. They don’t care if a book’s on some best-whatever list.
Dan: Yeah, it seems that way. Turn out’s been great.

Lily: Charlie, Serena. Care to join us for a 2011 version of a family breakfast?

Charlie (Kaylee DeFer): Maybe it’s none of my business but it seems that if you want people to read you then you need people to read about you first. Get Gossip Girl’s attention. Even a date would do it. Then steal her thunder by telling the real story on your blog.
Serena: You know you may be an evil genius.
Charlie: When I want to be.

Charlie: You have a girlfriend.
Nate: Who schedules time with me as if it were a board meeting.
Charlie: And who is my boss.
Nate: Well maybe I want something more.
Diana (Liz Hurley): Charlie! My office.
Charlie: If you want more, ask for it. And do us both a favor and ask her, not me.

Lily: What’s going on? Is Dan okay?
Rufus: I’m not sure. That was his agent Alessandra. She said he missed his book signing in Boston yesterday and he didn’t check into Burlington either. She can’t find him anywhere.

Blair: What are you doing here? Our treaty of 2010 clearly states the duck pond is my domain. {Monkey whines at her} Don’t try to fool me with your puppy dog eyes.
Chuck: I apologize for the intrusion, but your web-winged friend here waddled into the dog park and was about to become a labrador’s lunch.
Blair: And out of the goodness of your heart you came to his rescue.
Chuck: I like Duck a l’Orange as much as the next person, but it seemed cruel to let the poor creature suffer.
Blair: Especially in front of a photographer. What a lucky duck.
Chuck: I’ve imposed on your domain long enough already. If you’ll excuse me, Monkey needs his constitutional.

Blair: How much more do you need to see?
Dorota: Of duck pond? Not really my thing to begin with.

Gossip Girl: In drama there are many ways to unmask a villain.

Diana: I need to start a war between Serena and Gossip Girl. Stay on her and let me know what happens.
Charlie: Of course. {she goes to leave}
Diana: Oh. Regarding Nate. I thought I told you to keep your distance.

Gossip Girl: Sometimes you know who the bad guy is from the start…. but most times you find out they’ve been in front of you all along.

Blair: I can’t rest until I can prove Chuck is still his satanic self. What do you think would be more effective, having his shirts pressed with too much starch or getting him served blended Scotch at the Empire bar?
Dorota: What is test testing exactly?
Blair: We’ll be there—in clever disguises of course—to see him eviscerate the dry cleaner. Or fire the bartender. Thus proving that he’s only pretending to be magnanimous when I’ll be there or see it in the press.
Dorota: You sure you not just do this because you and Prince Louis not in a good place right now?

Charlie: Unless you want to get me fired, you need to stop talking to me.

Rufus: I know Dan. It’s not like him to skip out on an obligation.
Lily: And I know you. What time would you like to leave for Boston?
Rufus: The Morris Miner’s in the parking lot in Brooklyn. It’ll be faster to drive.

Max (Brian J. Smith): So when girls like you say lunch they really mean clothes?

Gossip Girl: Uh oh, Charlie. Looks like you’ve stayed in character all too well. Too bad there’s always an understudy waiting in the wings for you to slip and fall.

Diana: Are you purposefully trying to make a fool of me?
Charlie: I told you, it was an emergency.
Diana: To hide from Max, your mysteriously reappeared ex. And do you think it seems a tad convenient that the only way to do that was to snog Nate?
Charlie: Look I don’t know why Max is here. But if he finds me I could lose everything.

Chuck: Maybe we’re maturing too fast.
Nate: Which is why you’re back to playing Phantom of the Opera sex games?

Serena: Why are you looking for Chuck?
Blair: I have no choice! He’s trying to destroy my relationship with Louis because he knows it’s vulnerable.
Serena: I’m pretty sure the only war Chuck is waging is with his own demons.

Serena: B. Whatever you’re thinking, stop. Just work on your relationship with Louis. And let Chuck work on himself.

Gossip Girl: Seems the play’s the thing tonight. But watch out, players. You might be the ones getting played.

Dorota: You really think pillows under covers trick me? You lumpier now!

Nate seeing Diana: Why don’t you go find the witches. They’re awesome. And I think I see Lady Macbeth.

Blair: Do you remember when we used to play dress-up?
Chuck: How could I forget. Though I didn’t think this was your kind of entertainment anymore.

Gossip Girl: It’s been the performance of a lifetime for Cousin Charlie. But tonight it looks like it might just be the final curtain.

Diana: This is exactly why we need to work together on your blog. So Gossip Girl loses her power.
Serena: Or I just develop a thicker skin.

Dan: It was one thing to feel like my book wasn’t exactly appreciated in the Upper East Side—I expected that—but then the readings on the tour, they were less and less full. In Hartford I think like ten people showed up, and half of them were there to get out of the rain. My book is a failure, Dad. I’m a failure.

Max: I’m not going to drop everything because you tell me to, Ivy. You walked out on me.

Gossip Girl: All masks eventually have to come off, and with them so do the gloves.

Nate: So I don’t get it, you kissed Blair so she’d think you hadn’t changed?
Chuck: The only way for Blair to move on is if she thinks I never will. I had to kiss her to set her free.
Nate: That may be the most selfless thing you’ve ever done.
Chuck: I’ve never been more good and less happy about it.

Gossip Girl: Lock your windows, Upper East Siders. Looks like Serena’s cuckoo cousin Charlie is off her meds again. And about to jump to her own conclusion.

Gossip Girl: We all wear different masks for different reasons.
Diana: Nate, you matter to me. A lot. I was just trying to be cool. You know that’s my thing. Although I’m beginning to see I may need a new thing. From now on, equals.
Nate: Just us. Together. Seeing what happens.

Gossip Girl: Some masks we put on because it’s truly who we want to be. Some we wear because we can’t bear to face what’s really underneath. Or because it’s what someone else needs us to be.

Gossip Girl: And some masks we wear because we hope to stay hidden. But that’s the problem with wearing masks. They can be ripped off at any moment. XOXO —Gossip Girl