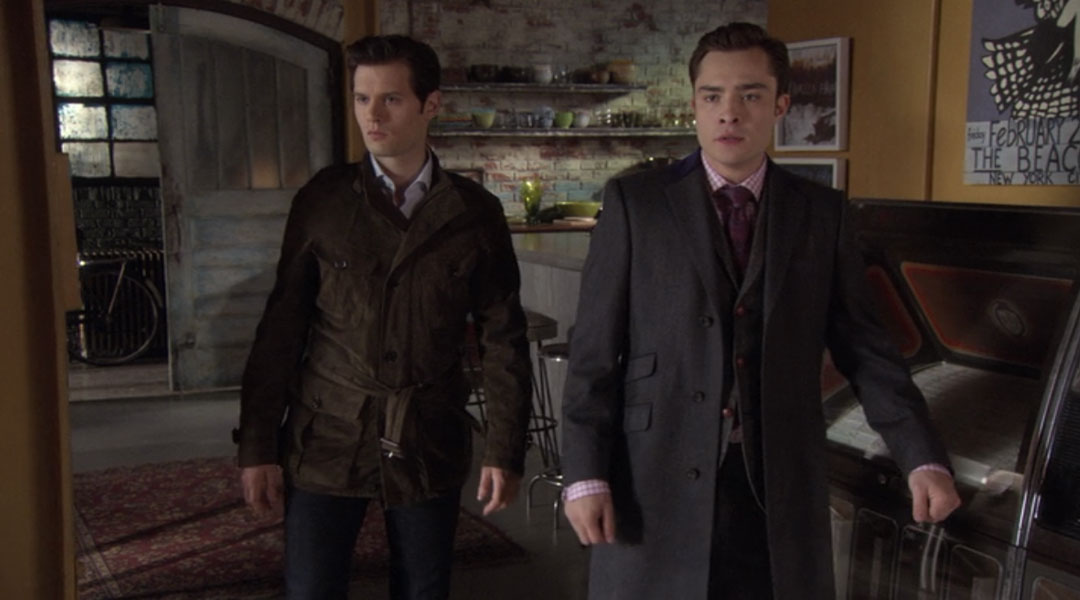 Gossip Girl: Apologies have been made and the security breach fixed. But two weeks later, still not one tip. Apparently no on can hold a grudge like an Upper East Sider. And no one can lie like one either.

Lily: Just because Carol made a mockery of her own debut does not mean Charlie should be cheated out of the experience.
Rufus: Yeah, she hired Karen Finley to go in her place and when Carol’s name was called, Karen walks out wearing nothing but chocolate and a pillbox hat.
Lily: Now I’m a Karen Finley fan, but it was a bit much. We were barred from the Plaza for years.

Charlie (Kaylee DeFer): It’s way too generous. Especially after everything I put you guys through with Max.
Lily: Oh please. That was not your fault. That young man had a lot of problems.
Dan: Hm. No wonder Serena was so into him.

Dan: I’m starting to understand the appeal of heroin or womanizing or whatever it is that writers do when they can’t write.
Serena: It’s hard to find inspiration when you’re not trashing your friends, huh?
Dan: Well at least I don’t have the added pressure of it being turned into a movie. So thank you for that.

Chuck: So you’re finally learning there are upsides to pissing off your family.

Chuck: You should know better than anyone, these stories are invented to sell papers to women who collect ceramic cats.
Nate: Still, maybe you should give her a call.
Chuck: Louis is the father of her child. There’s no way Blair’s walking away from that.

Dorota: The same thing happening to me. Pregnancy makes fingers swell up like kielbasas.
Blair: Well the paparazzi aren’t camped out downstairs to find out if your wedding is called off. If they see me without my ring they’ll think it means something.
Dorota: I start to think maybe it does.

Serena: That’s great about the second print of Inside. You’ll be able to figure out the afterword.
Dan: I’m not so sure though. I’ve never been stuck like this before.
Serena: What? It seems like an amazing opportunity to see how the book changed you, how it changed everyone.
Dan: Did it really change anyone?
Serena: Yes! Seeing where our characters ended made us realize exactly where we didn’t want to be. Nate didn’t want to be half a person and now he’s running The Spectator. And Chuck went from dying alone to therapy.
Dan: What about you?
Serena: Well I thought I’d change my ending by getting the job with Jane or this blog, but the truth is I’m still making horrible decisions in my love life.

Dan: Blair’s getting married and having a baby with Louis. And if she wasn’t with Louis she’d be with Chuck, not me.
Rufus: Maybe. Even if Blair doesn’t feel the same way, it might be worth it for you to tell her how you feel. At least so you can move on.

Blair: I plan on having my child the old-fashioned way: fully sedated. And the only Downward Dog I want to see you doing is cleaning up the dust from under that couch.

Gossip Girl: I guess it’s time for me to accept that if you want something badly enough you have to go out and get it yourself.
Dan: Hey, I was wondering what you were doing today.
Blair: Coming to stay with you, actually.
Dan: Uh… okay.
Gossip Girl: Watch out, kids. The end of me just might turn out to be the end of one of you.

Dan: I saw your photo in the paper. Is everything okay?
Blair: Everything is horrible. I need to go to Louis and reassure him that he’s never going to lose me but something is stopping me.
Dan: Chuck is stopping you.
Blair: No. I haven’t even spoken to Chuck.
Dan: You don’t have to. You have some strange force field effect on each other. Physicists should study it.

Blair: I’ll start with Chuck. Pros: he truly has become a good man.
Dan: Cons: he’s slept with every woman in New York. It could get a little awkward at dinner parties.
Blair: Sometimes fun. Don’t judge.

Serena: You know the truth is I don’t think I ever got it right before Dan. Or since then. Besides Nate he’s probably the only good guy I’ve ever dated.

Blair: I need your advice. It seems as you’ve found your way I’ve lost mine.
Chuck: I didn’t think Blair Waldorf could get lost.
Blair: Neither did I but I’m so lost I wound up in Brooklyn.
Chuck: There are worse places. This isn’t something Humphrey can help you with?
Blair: No. Only you.

Blair: Do you think you could love another man’s child.
Chuck: Why are you asking me this?
Blair: I’m paralyzed. I can’t move, I can’t breathe. You have to help me.
Chuck: I can’t make this decision for you, Blair. You’re the one that has to live with it.
Blair: But what’s the right choice, Chuck?
Chuck: I can’t imagine it would be a mistake to marry to father of your child. Right?

Serena: Telling her your feelings is not going to change your ending, it’s just going to mess with hers.
Dan: Well listen, the fact is, this doesn’t concern you at all. I’m going to talk to Blair. And even if it’s the biggest kamikaze disaster of my life, it’s my disaster—it’s my ending. So please, stay out of it.

Gossip Girl: They say love is blind. But jealousy it seems provides a clear view all the way to Monaco.

Nate: My grandfather just admitted to me that the only reason I have this job is because he bought the Spectator. Here I was, thinking I was doing great work and so proud of it, now I just feel like a total fraud.
Charlie: It doesn’t matter how you got here, Nate.

Lily: I’m always here for you. No matter how ugly or dark your feelings may be, you should not have to bear them alone.
Chuck: I appreciate it, Lily, but you have no idea what you’d be taking on.
Lily: Are you kidding? Of course I do. Try as you might, you don’t scare me. I’m sorry to inform you that my love for you is unconditional.
Chuck: The idea of unconditional love is as quaint as the Tooth Fairy or environmentally-friendly drycleaning.
Lily: Not when you’re a parent. Look, you might only be my son by marriage, Charles, but I’ve always loved you as my own. And I hope you get the opportunity to feel that with someone some day.

Louis (Hugo Becker): What are you doing here?
Chuck: Apparently the same as you. The Prince and the Pill-popper. This should be fun.

Gossip Girl: Sorry, boys. But didn’t you know that if you wait to long to seize the day—
Chuck: Gone.
Louis: Where would she go?
Gossip Girl: The one you want could get away.

Blair: You brought me to watch a human sacrifice. Or an episode of The Bachelor. Either way I am not happy.

Serena: What’s he doing?
Nate: Looks like he’s helping Chuck and Blair finally be together.

Blair: Why did you tell me to choose Louis?
Chuck: I thought it was selfish if I was the one to tell you to break up your family.
Blair: That was the moment you chose not to be selfish?

Nate: Took you long enough. And I’m not talking about the walk from the lobby to here.

Gossip Girl: Camus said that life is the sum of our choices. Choose wisely and fortune smiles upon you. But choose poorly? You never know what price you’ll have to pay.

Dan: You were right. She didn’t need my confession, she needed my help.
Serena: Wow. That’s a really amazing thing to do, Dan.
Dan: Yeah well. It wasn’t easy. But I do think that I can give myself a new ending by making sure Chuck and Blair get the ending they deserve. I want her to be happy.

Max (Brian J. Smith): No actress wants to play the same role their entire life.
Charlie: This is more than just a role. This is my life now and these people are my family.
Max: How can their love be real when you’re a total fake.

Nate: I spoke with the EMT who brought them in. He said it’s pretty bad.

Dan: So what do you want to do?
Serena: I want to finish what Diana started. I want to take Gossip Girl down for good.
Nate: I’m with you. I think we should use The Spectator to do it.

Charlie: This is all my fault.
Rufus: Of course it’s not. What are you talking about?
Charlie: I sent the Gossip Girl blast.

Lily: I just spoke to the doctor and the good news is Blair is awake and responsive.
Rufus: And Chuck?

Gossip Girl: We all like to think that we’re in the driver’s seat of our own lives. But the truth is, the idea that we can control our fate is an illusion. You can choose the most loyal friends, the dream job, the truest love.

Jack Bass (Desmond Harrington): There’s been an accident.
Diana (Liz Hurley): How bad?
Jack Bass: You know I wouldn’t take a risk like this if it wasn’t serious. I had no choice.
Diana: Okay, Jack. I’ll get on the next plane. You’ll meet us there?
Jack Bass: Of course. Thank you, Diana.
Diana: It’s not me you should thank.

Gossip Girl: But at the end of the day, our fate is decided for us. All we can do is hope we have the strength to cope with the hand she deals us.