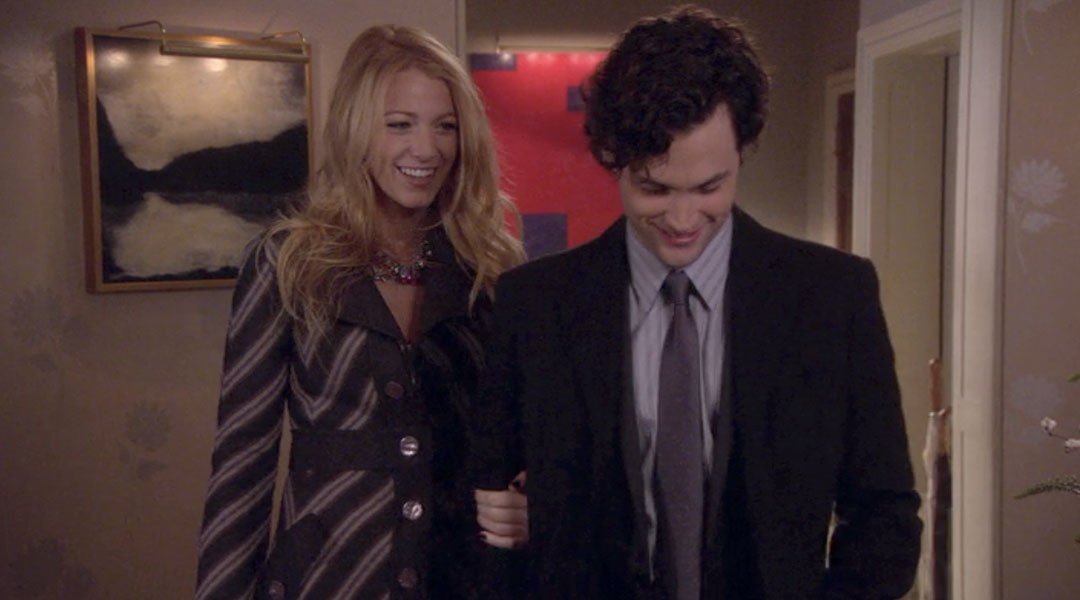 Chuck: Louis. What are you doing out here in the rain?
Louis (Hugo Becker): I hadn’t noticed.
Chuck: I hadn’t realized you and Blair had returned from Europe already.
Louis: We’ve been back for three weeks. I’m surprised you didn’t know.
Chuck: One of the downsides of not having Gossip Girl these last few months. Any information would have to come from Blair speaking to me directly, which she hasn’t.
Louis: She’s been busy.
Chuck: I’m very sorry she lost the baby. Is she all right?
Louis: She seems to be. She spends all hours planning the wedding.

Chuck: Look, I know we’ve had our differences. Are you really going to pass up the offer of an umbrella on a night like this?

Blair: Dorota’s obviously become lax in announcing visitors.
Chuck: There’s no need to reprimand the help. Louis invited me in.
Blair: I should have known you’d manipulate someone.
Chuck: How can you blame me. You won’t respond to my texts or calls. I just wanted to be there for you after the baby.
Blair: Well as you can see I survived without you. And I indeed to continue that way, so you should go.
Chuck: That’s it? I’m just cut out of your life without any explanation?
Blair: My New York wedding is in less than a month. I have to keep my priorities in order.
Chuck: We were your priority. What happened, Blair? What changed after the accident?
Blair: Did it ever occur to you that there’s no such thing as an accident?
Chuck: Well it certainly felt like one when the car hit the wall.
Blair: Or it was the universe’s way of pointing out what’s really important.
Chuck: How can you say we weren’t important? You were the only thing that matters.
Blair: Well you’re obviously not leaving, so I will.

Chuck: Blair said to tell you she’s gone to pick out china patterns.
Louis: At this hour?
Chuck: I’m sure it’s just her excuse to avoid me.
Louis: I wish that were true. These excursions have become quite regular.

Louis: I’m thinking of hiring a detective. I need to know the woman I’m about to marry isn’t having an affair.
Chuck: Well we’re both here so who else can she possibly be cheating with?

Chuck: Hello, Daniel.
Dan: What are you doing here? In Brooklyn. In the rain. At night.

Chuck: Did you know Blair was back in town?
Dan: No. I mean, I live in Brooklyn. Without Gossip Girl I know nothing.

Serena: I hope you’re coming to the Spectator party tonight.
Dan: After Nate finally forgave me for diminishing him to half a Derek in my book? I’m not going to miss this chance to support him.

Nate: You know Inside didn’t make it into our Years Best Books list. I’m sorry, dude.
Dan: Well it’s probably best to keep it in 2011. It’s a new year, new book.
Nate: What’s this one about?
Dan: I don’t know yet. Which is why I haven’t started writing it yet.

Lily: I hoped that Charlie might surprise us with a visit. Or at least a call.
Rufus: She made it pretty clear that life on the Upper East Side was too much for her.
Lily: Well I can understand. With the press at her party and the paparazzi chasing Charles and Blair. But we were so close. I just wish she had said goodbye.

Dan: There you are. Do you know how many brides I had to peek in on to find you? Yes, it is possible to lose too much weight before the wedding. Not you, though. You look perfect.

Blair: Vera designed it for me before the accident. And now… all I see is everything I lost.

Blair: Now. What did you burst in on my emotional moment to yell at me about?

Nate: Serena, there are thousands of unread messages here.
Serena: Yeah. I hoped if I ignored them long enough people would get the point. I guess they haven’t.

Nate: If you don’t start posting them they’ll go back to Gossip Girl. Or someone worse.
Serena: My blog is about my own experience, not using information to hurt people.
Nate: Yeah, well the least you can do is read them.

Blair: Why am I even asking your opinion on fashion? And why are you not responding? What stopped your never ending soliloquy?

Blair: Don’t go all Notebook on me. Not now. I need you.
Dan: Hey, you have me. Alright?

Serena: I hope you’ll focus on getting your fiancée to come to the party tonight. She could really use a night out with people who care about her.

Dan: You’re the most accomplished liar I know. Except maybe Jenny, but you trained her.
Blair: This is different.
Dan: Well maybe, but Blair, what is a lifetime of blackmailing authority figures and casting out townies if it doesn’t add up to the ability to at least feign a marginal level of happiness at an office party.

Serena: B. What’s going on? I feel like we’ve barely talked since you got back.
Blair: Wedding planning has been all-consuming.
Serena: You’ve had your wedding planned since you were twelve. Whatever it is, you can tell me.

Blair: Please God. You have my baby. You can’t take Chuck too. If you exist, let him live. I’ll do anything. I promise I’ll keep my vow to marry Louis. And never be with him again.
Nurse: Blair Waldorf? Chuck Bass is asking for you.

Serena: That’s why you cut Chuck out of your life? B, that nurse wasn’t an angel.
Blair: I know that. But… one minute he was dead and then I made a promise and he was alive.
Serena: That wasn’t a miracle. That was modern medicine.

Blair: There’s no way out of it. If anything ever happened to Chuck I would feel like it was my fault. I made a vow to marry Louis and that’s what I’m going to do.
Serena: You can’t base the rest of your life on one desperate moment. God doesn’t punish people for being in love.

Dan: I swear to you, we are not having an affair.
Chuck: Then what the hell are you doing?
Serena: He’s having a relationship with me.

Dan: Well now that you’re my date, can I get you a drink?

Louis: I owe you an apology. I know I promised to trust you, but I had a small lapse.
Blair: Oh, ah, none of us is perfect. We don’t even need to speak of it.
Louis: I do.

Louis: Blair, please. After the accident you told me you’d never leave me. Now you feel further away from ever.

Greg: Those photographers got really close to the car, but the bigger problem was that my brakes felt like they had no pressure.

Dan: Hey. Listen, I’m sorry I couldn’t tell you about Serena and me, but we didn’t want our families to know, and you’re kind of like her brother.
Chuck: So are you.

Serena: The photos of Dan and Blair made me realize it’s not the secrets that cause the problems, it’s the assumptions that people make about them.
Nate: So are you saying what I think you’re saying?
Serena: Yeah. I’m going to go through all the emails and see if there’s a positive way from me to use what’s in them.
Nate: You know what that means. You’re basically the new Gossip Girl.
Serena: New and improved.

Chuck: What the hell is going on?
Blair: I just came to tell you what a wonderful person you’ve become. And I hope you won’t let this change that.
Chuck: Well don’t leave me.
Blair: I’m not doing it to hurt you.
Chuck: You sat in the car and you said you’d never go. We were going to spend the rest of our lives together and now you can’t even look at me. Now you don’t even care enough to tell me why?
Blair: I saw what was important and I made the only choice I could.

Chuck: Love does not just disappear.
Blair: We can never be together. Chuck, just move on and be happy.
Chuck: I can’t. Until I know why, I won’t stop. I will use all of the power I have to find out the truth.
Blair: Some things are more powerful than even you. I’m sorry. Don’t let this destroy all the good in you. Just because we can’t be together doesn’t mean I won’t love you.

Louis: You’re not getting cold feet, are you?
Blair: No. I’ve never been more sure of any decision in my entire life.

Nate: Blair got in the wrong car that night. It says the car that crashed was the one ordered for me.

Gossip Girl: How about we help each other. xo xo Gossip Girl.