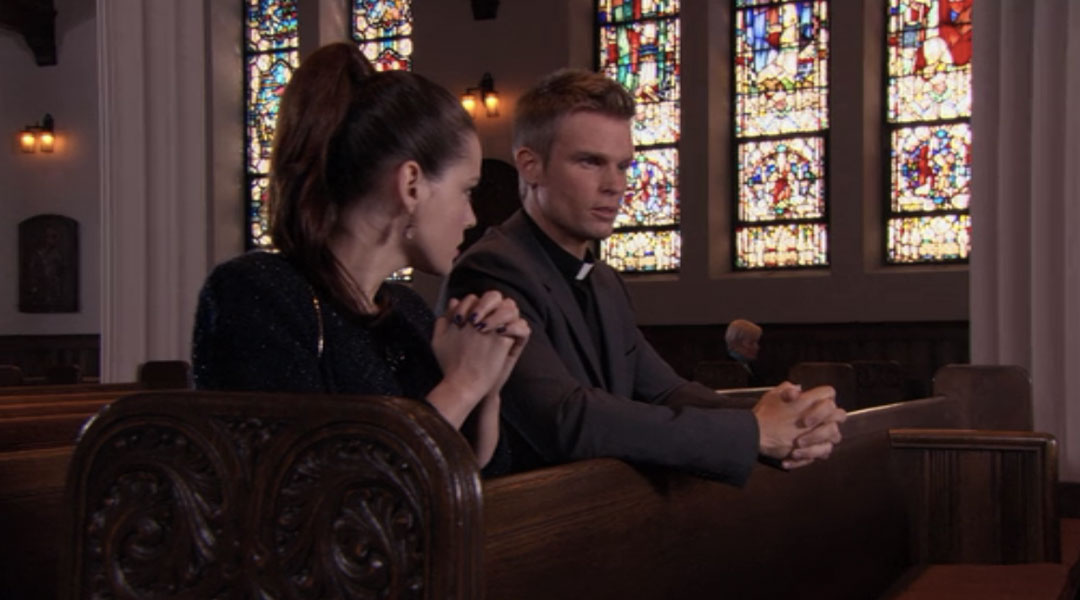 Gossip Girl: Hey, Upper East Sider. It’s me, Gossip Girl. I’m hoping you’re interested in some quid pro quo, because we both have something to prove.

Chuck: You look like hell. I assume this means you couldn’t find anything.
Nate: I’ve reread every piece in the Spectator since I started there and unless Christina Aguilera is mad about our baby bumper Mexican lunch article, I really don’t think there’s anything in here worth hurting me over.
Chuck: Gossip Girl didn’t offer to help?
Nate: Yeah, but only if I help her, whatever that means.
Chuck: Sometimes to get your needs met you need to choose an unsavory partner.
Nate: You know that might work for you at three in the morning on the Lower East Side, but it’s Gossip Girl.

Nate: Be careful. There’s a fine line between surveillance and stalking.
Chuck: Yeah. Getting caught. Which I don’t plan on doing.

Dan: This fake relationship is costing me a lot of money. I know that Blair asked us to stay together to keep Louis from getting suspicious, but I mean coffee in Brooklyn is half the price and it tastes better.
Serena: Well haven’t you learned if you want the world to think you’re doing something you have to do it on Madison Avenue. And eight dollar cappuccinos are the price you pay.

Blair: Forgive me Father, for I have sinned. I… pressed the close button on an elevator door when I saw a woman running to catch it.
Father Cavalia (Marc Menard): Why did you do that?
Blair: It was a long ride down to the lobby and she was wearing too much perfume. Diddy called it Unforgivable for a reason.

Chuck: Blair was inside a church for half an hour.
Nate: Please tell me you didn’t follow her inside.
Chuck: Of course not. I didn’t want to risk blowing my cover. Or bursting into flames.

Lily: It’s not every day you get to see your face on a taxicab.

Blair: You’re following me!
Chuck: I’m not going to leave until you tell me what changed. Why you turned your back on me—on us!
Blair: I told you everything there is to say. Lurking in doorways won’t help.
Chuck: Sooner or later you’re going to crack. You always do.

Simon/Schuster Guy: Your fans are crying out for a sequel to Inside. Frankly, so’s your publisher.
Dan: Yeah, I mean I don’t know who’s interested in hearing that story anymore.
Simon/Schuster Guy: Well your girlfriend Serena’s article about you two went up less than an hour ago and there are already over a thousand comments.
Dan: Um. Yeah, I was really hoping to stretch on this one.
Simon/Schuster Guy2: Then take a yoga class.

Simon/Schuster Guy: Write about what you know. And keep on dating Serena. At least until the next book comes out. It’s great press.

Serena: You wanted to see me?
Nate: Yeah. You’re fired.
Serena: Are you kidding?
Nate: You went behind my back and launched your column when I told you we weren’t ready.
Serena: Oh, we weren’t or Gossip Girl wasn’t? I saw her email.

Chuck: There’s really no need to come up. I told the front desk we’re just fine with our Gideon’s.

Chuck: What is your angle?
Father Cavalia: This is what’s known as divine intervention, M. Bass. I’d accept it if I were you.

Blair: I’ve never been so happy to be surrounded by so many Bridge and Tunnel types.

Rufus: You guys are the new hot couple. You should enjoy it.
Dan: But we’re not dating. We’re just faking it to protect Blair’s engagement.
Rufus: Okay. I’m not even going to ask you to fill me in, instead I’m going to just assume there’s a long royal explanation.
Dan: You know me well. And Blair.

William van der Bilt (James Naughton): I think we’ve heard enough. Thank you, Nate.
Nate: Oh, don’t thank me, thank Serena. It was her idea.
Tripp (Aaron Tveit): What the hell’s going on?
Nate: Well we knew you wouldn’t admit to anything so Serena and I staged that little argument on Gossip Girl. We figured you’d try to pin the accident on someone else just like you did two years ago when you left Serena in that car.
Serena: Did you really think I’d talk to you again? Never mind take your side against Nate’s.
William van der Bilt: You were really going to try and pin this on Maureen?
Trip: I’m not pinning anything. It was Maureen.

Goth Chick (Mollie Israel): Hey Bride, you got a match?
Blair: Two. And that’s the problem.

William van der Bilt: You can’t possibly blame me for what happened?
Nate: You pitted us against each other our entire lives. Everything is a competition and the prize is your approval. It’s the great Van der Bilt tradition.
William van der Bilt: Well I’m sorry that you feel that way about your own family. And might I remind you that Diana Payne would never have given you that job at the Spectator if I hadn’t paid her to. You really think you can make it on your own?
Nate: I don’t know. But it’s the only way it’ll mean anything.

Dan: While we’re alone, there’s something I need to say.
Serena: Are you fake breaking up with me?

Princess Beatrice (Roxane Mesquida): The plan is finished. It’s over. And so are we.
Father Cavalia: Beatrice, wait—
Princess Beatrice: I don’t want to play these games, to hurt people. I only want you but you’re never going to leave the church for me. We both know it. I’m just the only one brave enough to say it out loud.

Chuck: Tell her I came by. And that I’m not done. That’s one thing I learned from Blair. You don’t give up on the people you love.

Blair: I know Louis loves me, but sometimes I wonder if he understands me. But reading this is exactly what I needed to go into our wedding sure of my choice.
Serena: Can I be a little jealous?
Blair: You may.

Gossip Girl: Miss me, Upper East Siders? Have you been asking yourselves if you’re better off now than you were two months ago?

Beatrice: You may be able to get rid of me, but you won’t be able to stop the wedding.
Father Cavalia: Which is why I found someone far better equipped to assist me in my cause.

Gossip Girl: Trapped under the weight of a false accusation, I’ve done a lot of thinking about the kind of girl I want to be from now on. I’d like to be the kind that does what she says she’s going to do.

Thank you for writing my vows. It’ll be our secret. —Louis

Chuck: I have no time for niceties. Just tell me what you know.
Father Cavalia: I know what is in Blair Waldorf’s heart. And if you don’t want this wedding to happen, together we can make sure it doesn’t.
Chuck: She already thinks I’m a villain. I may as well become one.

Gossip Girl: You know what they say. “Talk is cheap.” So if you don’t have anything nice to say, maybe you should just shut your mouth. XOXO —Gossip Girl