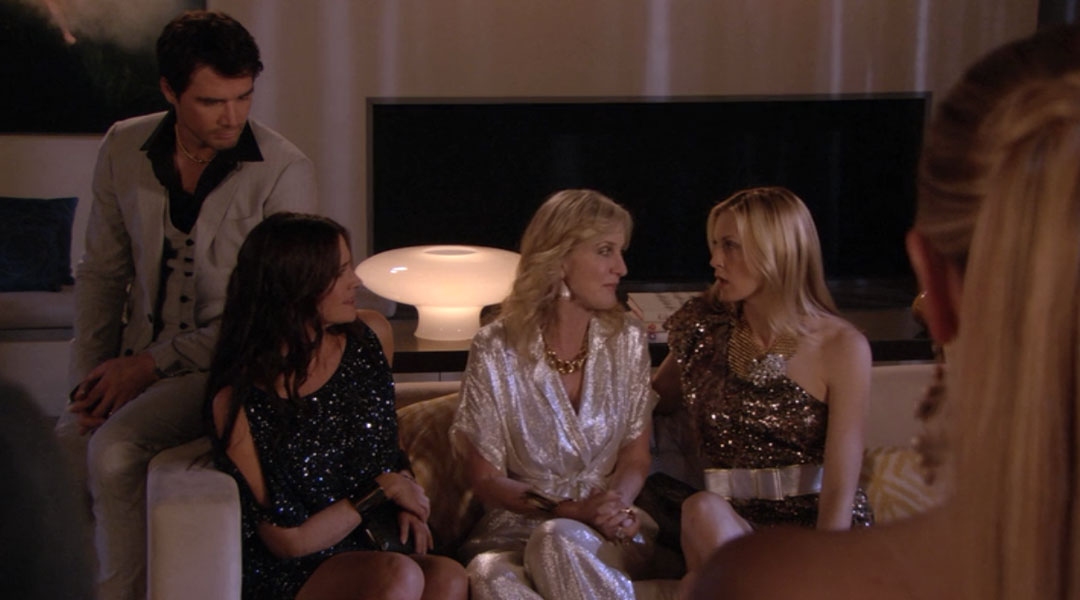 Gossip Girl: On the Upper East Side, staying alive isn’t as easy as it appears. And after last week’s security breach leading to no new tips, it looks like I might be dancing by myself.

Charlie (Kaylee DeFer): I’ve never seen so much lamé before. Grandma actually wore this?
Lily: Yes. And looked fabulous riding in on an elephant in it. Which is why the Studio 54 anniversary party is in her honor. And Bianca Jagger’s, but we won’t mention that to her when she arrives.
Cece Rhodes (Caroline Lagerfelt): Bianca was a striver. She could never outshine me no matter how little she wore.

Max (Brian J. Smith): Why would you trust an anonymous baker when you have a master chef in your midst? You could be my sous for the afternoon.
Serena: Could we cover ourselves in flour and lick spoons and do other cute things?
Max: That’s a prerequisite.

Rufus: That’s it. I stayed quiet while you crashed bridal showers and skipped out of book tours. I was hoping with enough time and support you’d realize that even though your book didn’t do as well as you’d hoped, you still had your whole future ahead of you. Being a shut-in is not bouncing back.
Dan: I was defending my honor.
Rufus: It’s time to leave Inside behind. And go outside.

Gossip Girl: Looks like I’m not the only one everyone despises. Lonely Boy’s fans are slowing dwindling. But his haters are going forth and multiplying.

Blair: Why should I thank someone for a blender? Do I look like the kind of girl who makes margaritas?
Dorota: Oh, margaritas sound delicious. But six months away at least.

Blair: I still love Louis. I just want to marry the sweet Prince who returned my Vivier slipper and made me believe in fairytales, not one of the Brothers Grimm.
Dorota: Even Prince Charming can fall off horse.

Blair: I need this time to figure out what went wrong with Louis and right it.
Dorota: Maybe he Freaky Friday with Mr. Chuck. They struck by lightning at the same time or pee in the same fountain.
Blair: That’s incredibly unsanitary.

Carol (Sheila Kelley): Hi. We have a problem.
Charlie: Well add this one to the list. Max is dating Serena. If you don’t want me to leave or get caught we have to pay him off immediately.
Carol: Except we don’t have the money. I just came from the bank. Turns out my mother’s added a security measure to the account—probably to punish me. Any withdrawal over fifty thousand dollars requires her signature.

Gossip Girl: Looks like I’m not the only one doing the hustle.

Blair: Namaste. I’m sorry to interrupt you getting into someone’s yoga pants.

Blair: Your transformation really is astounding. Case to share how you gave up your bad Bass ways. How you went from Charlie Sheen to Charlie Brown? Bar to mitzvah?
Chuck: There really is no answer to that question. It’s an evolution.
Blair: Hm.
Chuck: What’s really going on Blair?
Blair: Okay, if you must know I’m trying to pinpoint the source of your light so I can pull Louis out of the darkness. You changed, so can he. {she sits} I have all day.

Gossip Girl: If you ever find yourself sick with Saturday Night Fever, the last thing you want is someone to turn up the heat.

Nate: Listen, I’m sorry I had to be the one to tell you.
Tripp (Aaron Tveit): Yeah, I doubt that. I’m sorry you’re enjoying every second of this.
Nate: I know our history isn’t exactly pristine, Tripp, but we’re still family.

Dr. Krueger (Robert LuPone): And what is it you’re searching for, Blair?
Blair: Nice try on the bait-and-switch, but I was a teenage bulimic and my father came out when I was fifteen. This isn’t my first analysis.

Dr. Krueger: Are you saying that you want your fiance to be more like Chuck?
Blair: No! More like the man Chuck’s become. Like Louis used to be when Chuck was like Louis is now.
Dr. Krueger: If you don’t mind my saying so, you seem confused.

Chuck: But I did let go of you, Blair.
Blair: Then prove it by telling me how!
Chuck: I can’t. But if you don’t believe me, call on Harry Winston. The night of the Spectator launch, I left the engagement ring I bought you on the doorstep. And walked away.

Gossip Girl: Chaka Khan might have been every woman, but it looks like Charlie Rhodes is about to have trouble being two.

Alessandra (Marina Squerciati): If it makes you feel better, there’s a Twitter called HumphreyLove too.
Dan: That’s me.
Alessandra: Sorry. I should have recognized your scalpel-sharp deprecation.
Dan: I have over a thousand followers.
Alessandra: Let’s hope they bought books.

William van der Bilt (James Naughton): I understand you’re upset by Maureen’s manipulations, but Tripp was completely in the dark about her antics with that river rescue. I’m sure this is the same now. This isn’t a story, it’s a family squabble. That could cost your cousin his career.
Nate: I’ll do the right thing, don’t worry.

Chuck: Dr. Krueger thought you were upset I returned the ring.
Blair: He has too many PhDs. They cancel each other out and make him a moron.
Chuck: I returned it because you asked me to let you go. I wanted to move on to give you a happy life you deserve.
Blair: All this time I’ve blamed you. For pulling me into the dark. But I was wrong. It was me who brought out your dark side. And now that I’m with Louis I’ve done the same to him.

Lily: Rufus and I have a small gift for you.
Rufus: Opening night, I tracked it down for you.
Cece: How surprisingly thoughtful. If I had any memory of that night I’m sure it would be fond.

Carol: You’re a better actress than I thought. You got more out of her in three minutes than I have in forty-five years.
Charlie: I was just kind to her. You should try it.

Gossip Girl: Just when things are about to hit the fan, they hit the ground instead. With a thud.

Charlie: I know what’s wrong.
Cece: Yeah, you keep this apartment excessively warm.
Charlie: Just tell them, Grandma. She’s been dieting to fit into her jumpsuit. A few martinis and glasses of champagne on an empty stomach and anyone would pass out.

Nate: I told you I’d do the right thing. I’m sorry if we have different versions of what that is.
William van der Bilt: I’m not here to reprimand you. You remind me of myself when I was my age.
Nate: Wait, you’re not angry that I alluded to Maureen?
William van der Bilt: You’re your own man, Nathaniel. I always loved you, but now I respect you too.

Chuck: You never pulled me to the dark side, Blair.
Blair: I appreciate you trying to make me feel better, but I have my answer.
Chuck: You’re the lightest thing that ever came into my life.

Chuck: I only want you to be happy, I’m just sorry it couldn’t be with me.

Cece: Enough! This is my granddaughter Charlie Rhodes. I was there the day she was born, she is my family. I don’t need any proof. I know it in my bones.
Serena: You should go before we call the police.
Max: Just remember, I warned all of you.

Gossip Girl: Sister Sledge sang “We are family” but she had nothing on the Rhodes girls.

Cece: Thank you for your discretion earlier.
Charlie: No problem. But you know if you’re really sick, I think you should tell the family. They might care more than you think.
Cece: Perhaps. But I appreciate you protecting my secret. We all have them. It’s a Rhodes family tradition.

Nate: You still love her, huh?
Chuck: I can’t imagine the day I won’t.

Gossip Girl: Long after the clubs have closed, disco inferno rages on. For some, it’s burning desire that keeps them awake at night.
Dorota: Miss Blair, if you finally find key to bring Mr. Louis back to the castle why you not look like perky self?

Gossip Girl: For others it’s the flame of uncertainty that plague them.

Carol: Looks like we’re finally in the clear. You can leave anytime you want.
Charlie: Would it be okay with you if I stay?
Carol: You have enough money. You could set yourself up anywhere in the world.
Charlie: It’s not about the money for me. In fact, you can have all of it.
Carol: Then what do you want?
Charlie: Family.

Carol: If they ever found out the truth about the real Charlotte Rhodes, they would never forgive me. This way we both get to keep our family.

Charlie: What do you want?
Max: My life back. The move to Los Angeles, the job I gave up at Boulud, the two years I spent believing you and loving you when all you did was lie and cheat so you could have some fancy life that isn’t yours. You better watch your back. Because I am not leaving town until I get what I deserve.
Charlie: Good luck with that. No one can touch me anymore. I’m a Rhodes now.

Gossip Girl: If you’re going to play with matches make sure you don’t leave them around to spark the flame anew. Disco isn’t actually dead. And neither am I. XOXO —Gossip Girl.