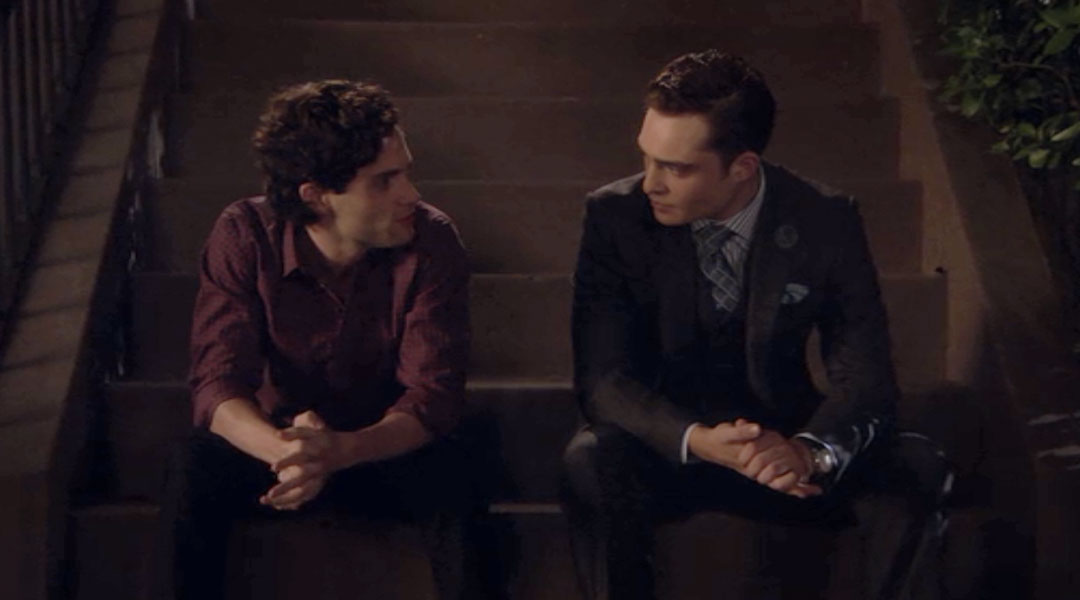 Gossip Girl: A shower is supposed to make you feel fresh and clean, but on the Upper East Side, they’re where I get the most dirt. And B’s bridal shower tonight promises to be an absolutely filthy affair. The only two people left off the list? Number one?

Chuck: Girls, I have been trying very hard lately to be good. Yet I don’t feel the slightest pang of guilt at unleashing my attack dog right now. And I should warn you, he’s trained to go after fake Prada.

Dan: “As for number two, in high school D. got left off the list because no one knew who he was. Now it’s because they know too well. Looks like Lonely Boy needs to change his name to Banished Boy.” {Lily and Rufus laugh} Really, guys? Thank you for the support.
Lily: Well listen, I mean at least they’re still talking about you. If they weren’t I’d start worrying.
Dan: Well that might happen soon since Inside is off the bestsellers list.

Dan: Well I think I’ll pass on watching you guys set up for a party that I’m not invited to.

Louis (Hugo Becker): I know I said some stupid things before I left, but I’ve come back a better man. I promise you.
Blair: I believe you. And I’m glad because I need you to be your best Prince Charming at our shower tonight.

Louis: I’ve done some thinking while I was gone, and I’m starting to wonder if your friends really have your best interest at heart.

Carol: Listen to me, you can’t go anywhere. If you disappear, Cece could cut off my trust for good.
Charlie (Kaylee DeFer): I’m sorry, but that’s your problem.
Carol: Actually, it’s your problem because if the money stops then I have nothing to lose.

Gossip Girl: This just in: we hear Blair took a paternity test to find out which daddy makes three.

Louis: This is exactly the type of thing I’m talking about.
Blair: You think someone I know sent that?
Louis: Your friends know no loyalty. Each one rats out the next. And you and I get sucked right into it.
Blair: My friends and I have grown up. We’re not like that anymore. Whoever sent that is clearly from your bloodline. Namely your sister, Beatrice.

William van der Bilt (James Naughton): I woke up this morning to find a big picture of you in the New Yorker. With Nate in the corner as the “man by your side”. It’s supposed to be the other way around, remember?
Diana: Sorry. I don’t control every publication in New York.
William van der Bilt: My goal was to remake Nate, not to make you a star. It’s time for you to step aside. Give him the Spectator.

Dan: You’re the new and improved Chuck Bass. I thought you could help me overhaul my image.
Chuck: You’re willing to get a haircut and change your clothes?
Dan: No.
Chuck: Then I’m not sure what I can do.

Gossip Girl: Seems Charlie’s in hot water. And she’s about to get burned.

Dan: I never pegged you for a Matrix fan.
Chuck: Something I learned early on: never watch A Clockwork Orange stoned. It takes your mind places it has no business going.

Chuck: Humphrey you wrote an entire novel about being an outsider. It’s how you define yourself. But if that’s not who you want to be anymore the only person who can change that is you. What you need to do is stop with the neurotic navel gazing.

Blair: I will not tolerate this insubordination. Are you her minions or mine? Just… give me a hint as to the size of the gathering and the level of formality. Just so I don’t show up overly-fabulous—if there is such a thing.

Penelope (Amanda Setton): Actually Serena’s been so slammed with work and her blog, she hasn’t had time to plan anything elaborate. So it’s going to be a rather intimate affair.
Blair: Intimate?
Penelope: Mm hm.
Blair: Okay.
Jessica (Alice Callahan): Yes. Dress casual.
Penelope: Um, I think the line from the evite was “Jeans okay.”
Blair: Casual. Jeans. Evite?

Serena: Look, Nate, you need to put your feelings for Diana aside and think of the ramifications for releasing this. This would do way more harm than good.
Nate: But it’s our smoking gun.
Serena: That’s gonna shoot you, me and all of our friends in the foot.

Max (Brian J. Smith): My feelings haven’t changed. And now that I know why you did what you did, maybe we can give our relationship another chance.
Charlie: Max, the truth is after all this lying I just need some time alone to figure out my real self. You know what I mean?
Max: Not really, no.

Gossip Girl: Uh oh, Charlie. Your mother of a lie is about to get you stuck in one big parent trap.

Diana (Liz Hurley): Why don’t we just see how many of your friends you’ve betrayed over the years. {No posts found} You’ve never sent anything into her?
Nate: Guess not. It’s just not who I am.

Charlie: Isn’t it a little mean that you and all of Blair’s friends are messing with her about tonight?
Lily: Well it might be the only event in Blair’s life where she’s not in control.

Gossip Girl: It’s important to be careful about what you tell others. Because sometimes your words can come back to haunt you. It can happen to anybody. Even me.

Serena: I’m not usually one for speeches, but I have to say how lucky I am to have Blair Waldorf as my best friend. I maybe the maid of honor, but the true honor is just knowing you, B. There is simply no one like her, no matter how hard some of your try. Congratulations to the beautiful bride. You have become the strong, confident princess I always knew you would. I love you so much and wish you and your prince nothing but happiness.

Diana: I called you here because I saw a side of your grandson today I hadn’t fully seen before.
William van der Bilt: Here I was pretty sure that you’d seen every side of him at this point.

Blair: You know Louis was right. None of us here are really friends. We just pretend to be so we can get stuff to talk about behind each other’s backs.
Serena: B, I’ll admit that I saw the web page but I had nothing to do with it coming out. I actually did everything I could to stop it and I thought I succeeded.
Blair: Well if you didn’t do it then who did?

Gossip Girl: Sorry, B. Must be hard to keep your head above water. When your prince is causing everyone around you to drown.

William van der Bilt: Diana, I think I’d like to invest after all. With one condition. Your resignation letter goes to the board with my check.
Diana: I suppose that is what’s best for the Spectator. And everyone else. I’ll start gathering my things.

Chuck: Why don’t you tell me why you antagonized Blair at her own wedding shower?
Dan: I was just trying to take some action, man, like you said. But it didn’t work.
Chuck: Let’s be clear. I told you to get some ass, not make one of yourself. It wasn’t until I saw you confronting Blair that I realized I had it all wrong.
Dan: Wa— Had what wrong?
Chuck: You’re in love with her.

Chuck: You can blame it on your tell-all novel. Or your perennial status as an outsider, but we both know Blair doesn’t care about any of that. She follows her heart. She chose Louis. We both lost. At least this time you have someone out with you.

Blair: It was you who posted that page, wasn’t it?
Louis: I was trying to show you what your friends are really like. Once and for all.
Blair: You could have shown me at home. You wanted this to happen. It was more important to prove your point than our own shower.

Blair: Do you see what we keep doing here? All the fights and accusations? It isn’t my friends, it’s us. I thought we were better people than this. The only ones caught in a cycle are us.
Louis: A cycle created by your friends in New York.
Blair: I can’t do this anymore.

Gossip Girl: Guess this shower’s officially over. And it looks like B’s the one throwing in the towel.

Gossip Girl: Loyal readers, I’d like to apologize to all of you for the awful and embarrassing breach of security tonight. In bad times like this you have many options.

Gossip Girl: You can choose to go on the offensive and come out swinging. Or you can pack your bags and admit defeat. Or you can drink yourself into oblivion and hope it’ll all just go away. Whatever I choose to do to win back your trust, one thing is certain. This is not the end between us.

Chuck: You shouldn’t be here.
Blair: I know. But I had to come. You’ve really been good this whole time, haven’t you?

Gossip Girl: Because try as you might to fight it, you know you love me. XOXO —Gossip Girl