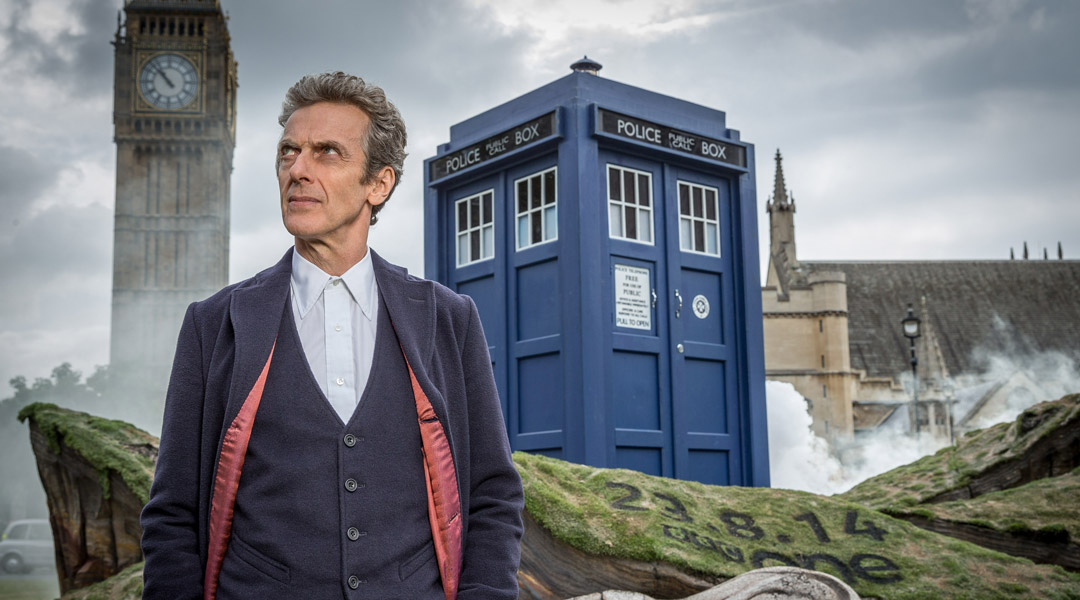 The Doctor: I was being chased by a giant dinosaur but I think I managed to give the slip.

The Doctor: Sleepy?
Strax: Sir?
The Doctor: Bashful. Sneezy. Dopey? Grumpy. {seeing the others} Ohh! You two! The green one. And the not-green one. Or it could be the other way around. Mustn’t judge. Oh, you remember… thingie. The not-me one. The asking questions one. Names aren’t my area.
Clara: Clara!
The Doctor: Well it might be Clara, might not be. There’s a lot to it.

The Doctor: Oh! You’ve got a dinosaur too!

The Doctor: Never mind! Everyone. Take five. {he collapses}

The Doctor: Who invented this room! It doesn’t make any sense. Look, it’s only got a bed in it!

The Doctor: So you’ve got a whole room for not being awake in? But what’s the point? You’re just wasting the room. And don’t look in that mirror. It’s absolutely furious!

The Doctor: You all sound all… English. You’ve all developed a fault!

Madame Vastra: I’m having difficulty sleeping.
The Doctor: Oh? Oh, well I wouldn’t bother with that. I never bother with sleeping. I just do standing up cat naps.
Madame Vastra: Oh really? How interesting. And when do you do those?
The Doctor: Well generally whenever anyone else starts talking. I like to skip ahead to my bits, it saves time.

The Doctor: Door. Boring. Not me. {he looks out the window} Me!

The Doctor: Sorry. I’m going to have to relieve you of your pet.
Cabbie (Mark Kempner): You’re what?
The Doctor: Shut up. I was talking to the horse.

The Doctor: A dinosaur is burning in the heart of London. Nothing left but smoke and flame. The question is: have there been any similar murders.
{…}
The Doctor: Question Two: if all the pudding brains are gawking, then what is he? {points to the Half-Faced Man}

The Doctor: I need, um, I need clothes. That’s what I need. And a big long scarf. No. I’ve moved on from that. Looks stupid.

The Doctor: Have you seen this face before?
Barney (Brian Miller): No.
The Doctor: Are you sure?
Barney: Sir, I’ve never seen that face.
The Doctor: It’s funny because I’m sure that I have. You know, I never know where the faces come from. They just pop up.

The Doctor: Why this one? Why did I choose this face? It’s like I’m trying to tell myself something. Like I’m trying to make a point. But what is so important that I can’t just tell myself what I’m thinking? I’m not just being rhetorical here. You can join in.
Barney: I don’t like it.
The Doctor: What?
Barney: Your face.
The Doctor: Well I don’t like it either.
I mean it’s alright up to the eyebrows. Then it just goes haywire. Look at the eyebrows! These are attack eyebrows. You could take bottle caps off with these.
Barney: They are mighty eyebrows indeed sir.
The Doctor: They’re cross. They’re crosser than the rest of my face. They’re independently cross! They probably want to cede from the rest of my face and set up their own independent state of eyebrows. That’s Scot, I am Scottish and I’ve gone Scottish.
Barney: Yes you are. You are definitely Scot sir. I hear it in your voice.

Barney: What devilry is this, sir?
The Doctor: I don’t know. But I probably blame the English.

Clara: So what kind of person would put a cryptic note in a newspaper advert?
The Doctor: Well I would like to say—
Clara: Oh go on, do say.
The Doctor: Well I would say that that person would be an egomaniac needy game player sort of person.
Clara: Thank you. Hm. Well at least that hasn’t changed.
The Doctor: I don’t suppose it ever will.
Clara: No, I don’t suppose it will either.
The Doctor: Clara, honestly. I don’t want you to change. It was no bother, really. I saw your advert, figured it out. Happy to play your game.
Clara: No. I didn’t place the ad, you placed the ad.

The Doctor: There’s something extremely wrong with everybody else sitting in this room.
Clara: Basically don’t you always think that?

The Doctor: Look without looking.

Clara: Anything we can do?
The Doctor: How long can you hold your breath?

The Doctor: Ah, no sausages. And there’s no pictures either. Do you have a children’s menu?
Waiter (Graham Duff): Liver.
The Doctor: I don’t like liver.
Waiter: Spleen. Brain stem. Eyes.
Clara: Um. Is that {high demand} of the house?
The Doctor: I don’t think that’s what’s on the menu. I think we are the menu.

The Doctor: You’ve got to admire their efficiency.
Clara: Is it okay if I don’t?

The Doctor: Hello. Hello! Are you the manager? I demand to speak to the manager!
Clara: It’s not a real restaurant, is it?
The Doctor: Well. It’s more a sort of a automated open collection station for the unwary diner. Serving tart without the pies.
Clara: So where are we now?
The Doctor: Factually, an ancient spaceship probably here for centuries. Functionally, a larder.

Clara: We’re alive in a larder?
The Doctor: Exactly. It’s cheaper than freezers.

The Doctor: It’s times like this I miss Amy.
Clara: Who?
The Doctor: Nothing.

Clara about the screwdriver: You should make that thing voice-activated. {nothing} Oh for God’s sake it is, isn’t it.
The Doctor: I don’t want to talk about it.

The Doctor: Sorry, too slow. There’s no point in him catching us both.
Clara: Well give me the screwdriver.
The Doctor: I might need it. {he leaves her}

The Doctor: Hello, hello. Rubbish robots from the dawn of time. Thank you for all the gratuitous information. Five-foot-one and crying, you never stood a chance.

The Doctor: This is your power source, feeble though it is. And I can use it to blow this whole room if I see one thing I don’t like. And that includes karaoke and mimes, so take no chances.

The Doctor: You’re out of your depth, sir. Never try and control a control freak.

Half-Face Man: Why are you here?
The Doctor: Why did you invite us? The message in the paper, that was you wasn’t it? {nothing} Oh. I hate being wrong in public. Everybody forget that happened. Clara, say the word.
Clara: What word?
The Doctor: They’d never send you in here without a word.
Clara: I don’t want to say it.
The Doctor: I’ve guessed it already.
Both: Geronimo.

The Doctor: Fifty-first century, right? Time-traveling spaceship. Crashed in the past. You’re trying to get home the long way ’round.

The Doctor as the escape pod lifts off: Okay, that’s clever. How are you powering it?
Half-Face Man: Skin.

The Doctor: Droids and apostrophes, I could write a book.

Half-Face Man: How could you kill me?
The Doctor: For the same reason you ask me that question, because you don’t want to carry on.

The Doctor: There isn’t any Promised Land, it’s just a superstition.

The Doctor: I’ve already come a very long way. And unlike you I do not expect to reach the Promised Land.

The Doctor: You realize of course, one of us is lying about our basic programming.
Half-Face Man: Yes.
The Doctor: And I think we both know who that is.

Clara: You’ve redecorated.
The Doctor: Yes.
Clara: I don’t like it.
The Doctor: I’m not entirely convinced myself. I think there should be more round things on the walls. I used to have a lot of round things. I wonder where I put them.

The Doctor: I’m the Doctor. I’ve lived for over two thousand years. And not all of them were good. I’ve made many mistakes, and it’s about time that I did something about that.

The Doctor: Clara, I’m not your boyfriend.
Clara: I never thought you were.
The Doctor: I never said it was your mistake.

Clara: I’m sorry. I’m so so sorry. But I don’t think I know who you are anymore.

The Doctor: Better get that. Might be your boyfriend.
Clara: Shut up. I don’t have a boyfriend.

The Doctor: Well?
Clara: Well what?
The Doctor: He asked you a question. Will you help me?
Clara: You shouldn’t have been listening.
The Doctor: I wasn’t, I didn’t need to. That was me talking. You can’t see me, can you? You look at me and you can’t see. Do you have any idea what that’s like? I’m not on the phone, I’m right here. Standing in front of you. Please just… just see me.

Clara: Thank you.
The Doctor: For what?
Clara: Phoning. {she hugs him}
The Doctor: I don’t think that I’m a hugging person now.
Clara: I’m not sure you get a vote.
The Doctor: Whatever you say.
Clara: This isn’t my home by the way.

Clara: Where are we?
The Doctor: Glasgow, I think. Ah. You’ll fit right in. Scottish.

The Doctor: I don’t have any money.
Clara: You’ll fetch it then.
The Doctor: I’m not sure that I’m the fetching sort.
Clara: Yeah. Still not sure you get a vote.