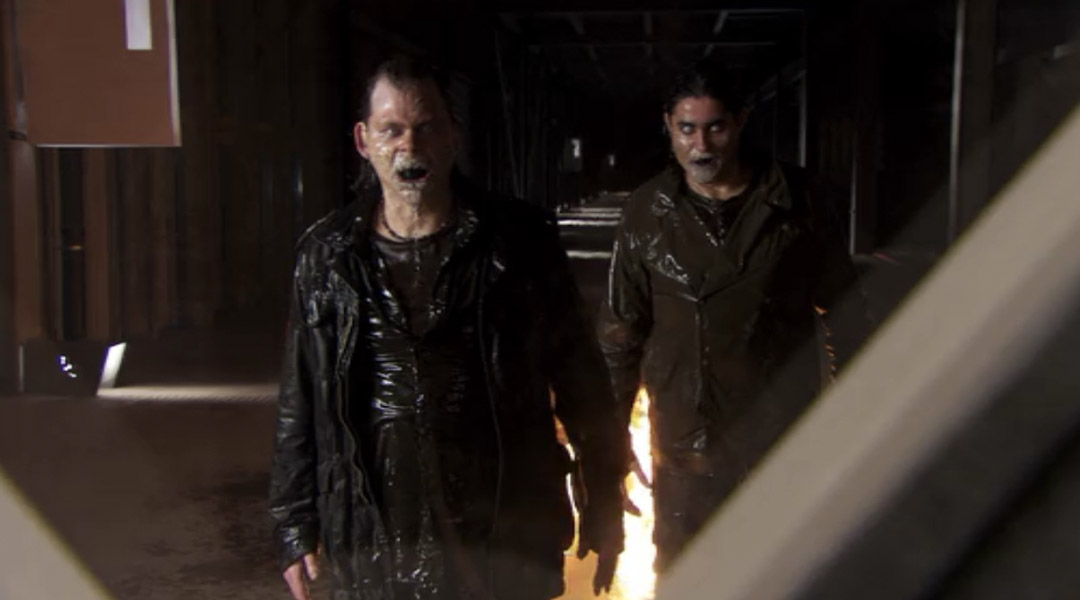 Tarak Ital (Chook Sibtain): It’s a man. Man on Mars. How?
Steffi Erhlich (Cosima Shaw): He was wearing this thing. I have never seen anything like it.
Tarak Ital: What did Mission Control say?
Steffi Erhlich: They’re out of range for ten hours with the solar flares.
Captain Brooke: You can cut the chat everyone.
The Doctor: Actually “chat” is second on my list. The first being “gun”. Pointed at my head. Which then puts my head second and chat third I think. Gun head chat. Yeah. I hate lists. But you could hurt someone with that thing. Just, put it down.
Captain Brooke: Oh you’d like that.
The Doctor: Could you find me someone who wouldn’t?
Captain Brooke: Why should I trust you?
The Doctor: Because I give you my word. And forty million miles away from home my word is all you’ve got.

Captain Brooke: As I said, Doctor. Everyone knows our names.
The Doctor: Oh. They’ll never forget them.

The Doctor: I should go. I really should go. I’m sorry. I’m sorry with all of my hearts. But it’s one of those very rare times when I’ve got no choice. It’s been an honor. Seriously. A very great honor to meet you all. The Martian pioneers. Thank you. Thank you. There’s the other two. Hold on. Margaret Cain and Andrew Stone.
Gold: Maggie, if you want to meet the only new human being that you’re going to see in the next five years better come take a look. {A strange noise from the intercom}
Brooke: What is that?
The Doctor: Oh, I really should go…

The Doctor: I hate robots. Did I say?
Groom (Michael Goldsmith): Yeah, and he’s not too fond of you. What’s wrong with robots?
The Doctor: It’s not the robots, it’s the people. Dressing them up and giving them silly voices. Like you’re reducing them.
Groom: Yeah. Friend of mine, she made her domestic robot look like a dog.
The Doctor: Ah well, dogs… that’s different.

The Doctor using his sonic screwdriver to illuminate the dome: There you go.
Brooke: What’s that device?
The Doctor: Screwdriver.
Brooke: You the doctor or the janitor?
The Doctor: I don’t know. Sounds like me. The maintenance man of the universe.

Brooke: Keep surveillance until I get back. And close down all water supplies. All pipes and outlets. Don’t consume anything. Have you got that everyone? That’s an order. Don’t drink the water. Don’t even touch it. Not one drop.

The Doctor: Human beings are 60 percent water so that makes them the perfect host.
Brooke: What for?
The Doctor: I dunno. And I never will. Because I’ve got to go. Whatever’s started here, I can’t see it to the end. I can’t.

Brooke: We’re safe. It’s hermetically sealed. They can’t get in.
The Doctor: Water is patient, Adelaide. Water just waits. Wears down the cliff tops, the mountains. The whole of the world. Water always wins.

The Doctor: Blimey, it’s a distance. You could do with bikes in this place.
Brooke: Every pound in weight equals three tons of fuel.
The Doctor: Yeah I know. But… bikes!

The Doctor: Where’d you get your water from?
Brooke: The ice field. That’s why we chose the crater. We’re on top of an underground glacier.
The Doctor: Tons of water, marvelous.
Yuri Kerenski (Aleksandar Mikic): But every single drop is filtered and screen. It’s safe.
The Doctor: Looks like it, yeah.

The Doctor: This thing, whatever it is, doesn’t just hide in water. It creates water. {to Maggie} Tell me what you want.
Yuri Kerenski: She was looking at the screen. At Earth. She wants Earth. A world full of water.

Gold: I’m sorry, but it’s an unknown infection and it’s spreading. That demands action procedure one.
Brooke: You think I don’t know that?
Gold: I think you need reminding.
Brooke: Yeah.
Gold: Well at least I’m good for something.
Brooke: Now and again.
Gold: That’s almost a compliment. Things must be serious.
The Doctor: Sorry! But action one, that means evacuation, yeah?
Brooke: We’re going home.

The Doctor: They tell legends of Mars, long ago. A fine and noble race built an empire out of snow. The Ice Warriors.
Brooke: I haven’t got time for stories.
The Doctor: Perhaps they found something down there. Used their might and their wisdom to freeze it.

Brooke: You don’t look like a coward. But all you’ve wanted to do is leave. You know so much about us.
The Doctor: Well, you’re famous.
Brooke: It’s like you know more.
The Doctor: This moment—this precise moment in time—it’s like…. I mean it’s only a theory, what do I know. But. I think certain moments in time are fixed. Tiny, precious moments. Everything else is in flux, anything can happen. But those certain moments, they have to stand. This base on Mars, with you, Adelaide Brooke, this is one vital moment. What happens here must always happen.
Brooke: Which is what?
The Doctor: I don’t know. I think something wonderful happens. Something that started fifty years ago. Isn’t that right?
Brooke: I’ve never told anyone that.
The Doctor: You told your daughter. And maybe one day she tells the story to her daughter. The day the Earth was stolen and moved across the Universe. And you…
Brooke: I saw the Daleks. We looked up, the sky had changed. Everyone was running and screaming. And my father took hold of me. I never saw him again. Nor my mother. They were never found. But out on the streets there was panic. And burning. I went to the window. And there, in the sky, I saw it, Doctor. And it saw me. It stared at me. It looked right into me. And then… it simply went away. I knew that night, I knew I would follow it.
The Doctor: But not for revenge.
Brooke: What would be the point of that?
The Doctor: That’s what makes you remarkable. And that’s how you create history.
Brooke: What d’you mean?

The Doctor: Imagine it, Adelaide, if you began a journey that takes the human race all the way out to the stars. It begins with you. And then your granddaughter, you inspire her. So that in thirty years, Susie Fontana Brooke is the pilot of the first lightspeed ship to Proxima Centauri. And then everywhere. With her children, and her children’s children, forging the way. To the Dragon Star, the Celestial Belt of the Winter Queen. The map of the Water Snake Wormholes. One day a Brooke will even fall in love with a Tandonian prince. And that’s the start of a whole new species. And everything starts with you, Adelaide. From fifty years ago to right here. Today.
Brooke: Who are you? Why are you telling me this? Doctor? Why tell me?
The Doctor: As consolation.

Brooke: You were right, Doctor.
The Doctor: What about?
Brooke: Bikes!

Brooke: Tell me! I could ramp up the pressure in that airlock and crush you.
The Doctor: Except you won’t. You could have shot Andy Stone but you didn’t. I loved you for that. Imagine… Imagine you knew something… Imagine you found yourself somewhere. I don’t know, Pompeii. Imagine you were in Pompeii.
Brooke: What the hell’s that got to do with it?
The Doctor: And you try to save them. But in doing so you make it happen. Anything I do just makes it happen.

Brooke: Help me. Why won’t you help, Doctor, if you know all of this? Why can’t you change it?
The Doctor: I can’t.
Brooke: Why can’t you find a way?
The Doctor: I’m sorry but I can’t. Sometimes I can. Sometimes I do. Most times I can save someone. Or anyone. But not you. You wondered all your life why that Dalek spared you. I think it knew. Your death is fixed in time forever. And that’s right.
Brooke: You’ll die here too. What’s going to save you?
The Doctor: Captain Adelaide Brooke.
Brooke: Damn you.

Gold: Captain. The shuttle is down.
Brooke: What the hell do you mean?
Gold: Compromised. It was Maggie.
Brooke: Get out of there!
Gold: Too late. They want this ship to get to Earth. Got no choice. Hated it Adelaide! This bloody job. Never gave me a chance. You never could forgive me. {hits the destruct.} See you later.

The Doctor: Mia! Take this sealant, fix that beam. Yuri! Open the emergency oxygen. Adelaide! Don’t just sit there. That’s better! The dome’s still got integrity. It’s ten feet of steel combination made in Liverpool. Magnificent workmanship!
Brooke: It can’t be stopped. Don’t die with us.

The Doctor: Adelaide, what are you doing?
Mia Bennett (Gemma Chan): Action Five.
The Doctor: If I have to fight you as well, then I will.

The Doctor: Don’t you get it? This is the 21st of November, 2059. Same day. On Earth. And it’s snowing! I love snow.
Mia Bennett: What is that thing? It’s bigger— I mean, it’s bigger on the inside. Who the hell are you?
Brooke: Look after her.
Kerenski: Yes ma’am.
Brooke: You saved us.
The Doctor: Just think about it. Your daughter and your daughters’ daughter. You can see them again. Family reunion.
Brooke: But I’m supposed to be dead.
The Doctor: Not anymore.
Brooke: But. Susie. My granddaughter. Wasn’t she supposed to become… Might never exist now.
The Doctor: Nah! Captain Adelaide can inspire her face-to-face. Different details but the story’s the same.
Brooke: But you can’t know that! And if my family changes the whole of history could change. The future of the human race. No one should have that much power.
The Doctor: Tough.
Brooke: You should have left us there.
The Doctor: Adelaide I’ve done this sort of thing before. In small ways, saved some little people. But never someone as important as you. Oh, I’m good.
Brooke: Little people?! What, like Mia and Yuri? Who decides they’re so unimportant? You?
The Doctor: For a long time I thought I was just a survivor, but I’m not. I’m the winner. That’s who I am. The Time Lord Victorious.
Brooke: And there’s no one to stop you.
The Doctor: No.
Brooke: This is wrong, Doctor. I don’t care who you are. The Time Lord Victorious is wrong.
The Doctor: That’s for me to decide. Now you better get home. Aw! It’s all locked up. You’ve been away. Still, that’s easy. All yours.
Brooke: Is there nothing you can’t do?
The Doctor: Not anymore.

The Doctor: I’ve gone too far. Is this it? My death? Is it time?