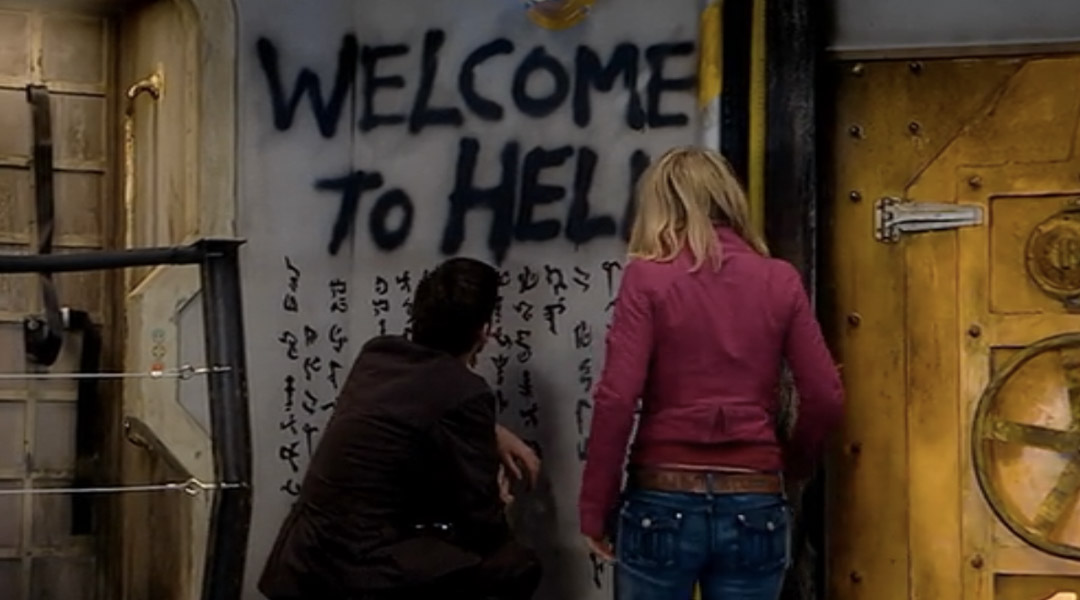 The Doctor about the TARDIS: I don’t know what’s wrong with her. She’s sort of… queasy. Indigestion, like she didn’t want to land.
Rose: Well if you think there’s gonna be trouble, we could always get back inside and go somewhere else. {they laugh}
The Doctor looking around: I think… we’ve landed inside a cupboard.

The Doctor: Hold on. What does that say? {examines the writing} That’s weird, it won’t translate.
Rose: But I thought the TARDIS translated everything—writing as well. It should say English.
The Doctor: Exactly. If that’s not working then it means this writing is old. Very old. Impossibly old. We should find who’s in charge. We’ve gone beyond the reach of the TARDIS’ knowledge—not a good move.

Mr. Jefferson (Danny Webb): Captain, you’re not going to believe this. We’ve got people. Out of nowhere. I mean real people. I mean two living people. Just standing here. Right in front of me.
Zachary Cross Flane (Shaun Parkes): Don’t be stupid. That’s impossible.
Jefferson: I was just telling them that.
Rose: But you’re a sort of space base. You must have visitors now and then. It can’t be that impossible.
Jefferson: You’re telling me you don’t know where you are?
The Doctor: No idea. More fun that way.

Rose: But if there’s no atmosphere out there, what’s that?
Ida: Stars breaking up, gas clouds. We have whole solar system’s being ripped apart above our heads before falling into that thing.
Rose: So a bit worse than a storm then.
Ida: Just a bit.
Rose: Just a bit, yeah.

Zach: That’s the black hole officially designated K37-Gen-5.
Ida: In the Scriptures of the Valtino, this planet is called Krop Tor, “the bitter pill.” And the black hole is supposed to be a mighty demon, who was tricked into devouring the planet. Only to spit it out, ’cause it was poison.

The Doctor: There we go. D’you see? To generate that gravity field and the funnel you’d need a power source with an inverted self-extrapolating reflex of six to the power of six every six seconds.
Rose: That’s a lot of sixes.
The Doctor: And it’s impossible.
Zach: It took us two years to work that out.
The Doctor: I’m very good.

The Doctor: Excuse me, Zach, wasn’t it?
Zach: That’s me.
The Doctor: Just stand there. ‘Cause I’m going to hug you. Is that all right?
Zach: ‘Spose so.
The Doctor: Here we go. Comin’ in! Human Beings. You are amazing. Ha! Thank you.
Zach: Not at all.
The Doctor: But apart from that you’re completely mad. You should pack your bags, get back in that ship and fly for your lives.

Ida to the Doctor: I’ll, uh, put you in the duty roster. We need someone in the laundry.

The Doctor: I’ve trapped you here.
Rose: No. Don’t worry about me. Okay, we’re on a planet that shouldn’t exist, underneath a black hole… with no way out. Yeah, I’ve changed my mind. Start worrying about me.

Rose: I did that job once. I was a dinner lady. Not that I’m calling you a lady. Although I don’t know, you might be. Do you actually get paid, though? Do they give you money?
Ood: The Beast and his armies shall rise from the pit to make war against God.
Rose: I’m sorry?
Ood: Apologies. I said, “I hope you enjoy your meal.”
Rose not so sure: Yeah.

Rose: No signal. That’s the first time I’ve gone out of range. Mind you, even if I could… what would I tell her? Can you build another TARDIS?
The Doctor: They were grown, not built. And with my home planet gone we’re kind of stuck.
Rose: Well, could be worse. This lot said they’d give us a lift.
The Doctor: And then what?
Rose: I don’t know. Find a planet. Get a job. You live a life same as the rest of the Universe.
The Doctor: I’d have to settle down. Get a house or something, a proper house. With… doors and carpets. Me, living in a house. That, that, is terrifying.
Rose: You’d have to get a mortgage.

The Doctor: I promised Jackie I’d always take you back home.
Rose: Everyone leaves home in the end.

Rose: What does Basic 30 mean?
Danny: Well, it means that they’re shouting—screaming—inside their heads.
The Doctor: Or something’s shouting at them.

Rose: It’s funny ’cause people back home think that space travel’s gonna be all whizzing about, and teleports, anti-gravity. But it’s not, is it? It’s tough.
The Doctor: I’ll see you later.
Rose: Not if I see you first.

The Doctor: Rose, you can tell Toby, we’ve found his civilization.

Ida: Well, we’ve come this far. There’s no turning back.
The Doctor: Oh, did you have to? “No turning back.” That’s almost as bad as, “nothing can possibly go wrong” or “This is going to be the best Christmas Walford’s ever had.”

The Doctor: We’ve found something. Looks like metal, like some sort of seal. I’ve got a nasty feeling the word might be “trap door.” Not a good word, “trap door”. Never met a trap door I liked.

The Ood: We are the Legion of the Beast.

The Beast (Gabriel Woolf) through the Ood: I have been imprisoned for eternity. But no more. The pit is open. And I am free!