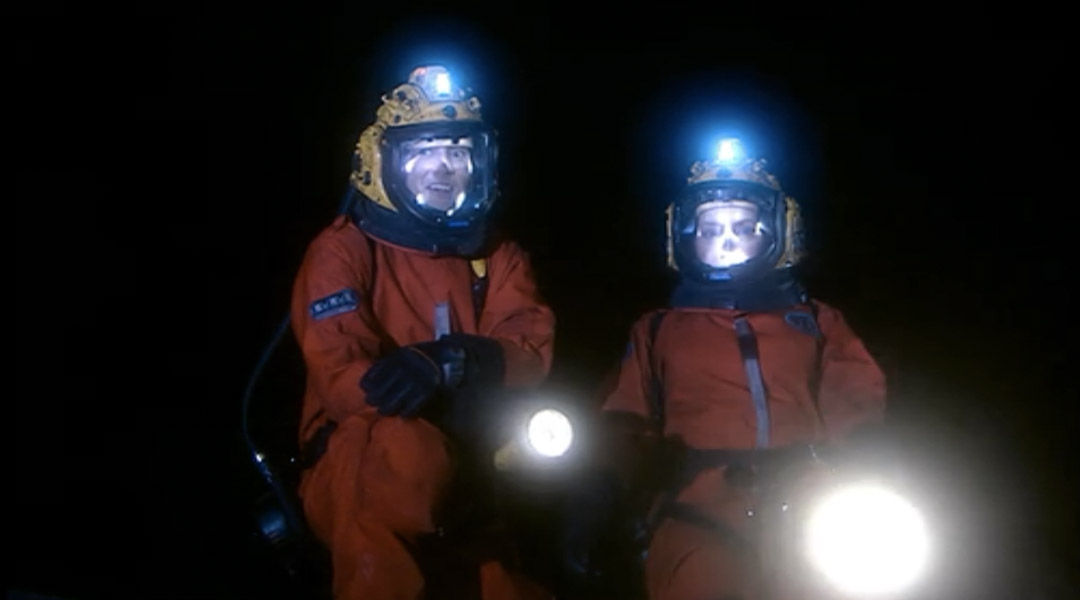 The Doctor: The seal opened up. It’s gone. All we’ve got left is this chasm.
Zachary Cross Flane (Shaun Parkes): How deep is it?
The Doctor: Can’t tell. Looks it goes down forever.
Rose: “The pit is open.” That’s what the voice said.
Zach: But there’s nothing.

Zach: Ida. I recommend that you withdraw. Immediately.
Ida Scott (Claire Rushbrook): But we’ve come all this way.
Zach: Okay, that was an order. Withdraw. When that thing opened the whole planet shifted. One more inch and we fall into the black hole, so this thing stops right now.
Ida: But it’s not much better up there with the Ood.
Zach: I’m initiating strategy nine, so I need the two of you back up top immediately. No argu— {she shuts off the comm.} Ida! Ida!

Ida: What do you think?
The Doctor: He gave an order.
Ida: Yeah but. What do you think?
The Doctor: It said “I am the temptation.”
Ida: But if there’s something in there, why is it still hiding?
The Doctor: Maybe we opened the prison but not the cell.
Ida: We should go down. I’d go. What about you?
The Doctor: Oh! Oh, in a second. But then again… that is so human. “Where angels fear to tread.” Even now, standing on the edge. It’s that feeling you get, hm? Right on the back of your head. That impulse. That strange little impulse. That mad little voice saying, “Go on! Go on. Go on. Go over, go on!” Maybe it’s relying on that. For once in my life, Officer Scott, I’m going to say… retreat.

The Doctor: Oof. Now I know I’m getting old. Rose, we’re coming back.
Rose: Best news I heard all day.

The Doctor: What’s strategy nine?
Ida: Open the airlocks. We’ll be safe inside the lockdown. The Ood will get thrown out into the vacuum.
The Doctor: So we’re going back to a slaughter.
Ida: The Devil’s work.

The Beast (through the Ood): …and the lost girl, so far away from home. The valiant child who will die in battle so very soon.
Rose: Doctor, what does it mean?
The Doctor: Rose, don’t listen.
Rose: What does it mean?

The Doctor: That thing is playing on very basic fears. Darkness. Childhood nightmares. All that stuff.
Danny: But that’s how the devil works.
The Doctor: Or a good psychologist.

Rose: Right. So we need to stop them or get out. Or both.
Danny (Ronny Jhutti): I’ll take both, yeah? But how?
Rose: You heard the Doctor. Why do you think that thing cut him off? Because he was making sense. He was telling you to think your way out of this.

Rose: Not your best angle, Danny.
Danny: Oy, stop it.
Toby behind Rose: I don’t know. It could be worse.
Rose: Oy!

Jefferson (Danny Webb): Regret to inform, sir, I was a bit slow. Not so fast these days.
Zach: I can’t open 8.1, John. Not without losing air for the others.
Jefferson: And quite right too, sir. I think I bought them a little time.

Jefferson: Might I ask if you can’t add oxygen to this section, can you speed up the process of its removal?
Zach: I don’t understand. What d’you mean?
Jefferson: Well, if might choose the manner of my departure, sir, lack of air seems more natural then, well… let’s say, “death by Ood.” I’d appreciate it, sir.
Zach: God speed, Mr. Jefferson.
Jefferson: Thank you, sir.

Ida: That’s it. That’s all we’ve got. Are you getting any sort of read out?
The Doctor: Nothing. Could be miles to go yet. Or… could be thirty feet. No way of telling. I could survive thirty feet.
Ida: Oh no you don’t!

The Doctor: Neo-classics. Have they got a Devil?
Ida: No, not as such. Just, um… “the things that men do.”
The Doctor: Same thing in the end.
Ida: What about you?
The Doctor: I… believe. I believe I haven’t seen everything, I don’t know. It’s funny, isn’t it? The things you make up—the rules. If that thing had said it came from beyond the universe I’d believe it, but before the universe… that’s impossible. It doesn’t fit in my rules. Still, that’s why I keep travelling. To be proved wrong. Thank you Ida.
Ida: Don’t go!
The Doctor: If they get back in touch… if you talk to Rose, just tell her… tell her… Oh, she knows.

Zach to Rose: I have lost too many people. I am not leaving you behind.

The Doctor: I accept that you exist. I don’t have to accept what you are, but your physical existence, I give you that.

The Doctor: You’re imprisoned. Long time ago. Before the universe—after, sideways, in-between—doesn’t matter. The prison is perfect. It’s absolute. It’s eternal. Oh, yes! Open the prison, the gravity field collapses. This planet falls into the black hole! You escape, you die. Brilliant! But that’s just the body. The body is trapped, that’s all. The Devil is an idea. In all those civilizations, just an idea. But an idea is hard to kill. An idea could escape. The mind—the mind of the great Beast—the mind can escape! Oh, but that’s it! You didn’t give me air, your jailers did! They set this up! All those years ago! They need me alive. Because if you’re escaping, then I’ve gotta stop you.

The Doctor: If I destroy the prison, your body is destroyed. Your mind with it. But then you’re clever enough to use this whole systen against me. If I destroy this planet I destroy the gravity field. The rocket. The rocket loses protection, falls into the black hole. I’ll have to sacrifice Rose. {the Beast laughs.}

Rose: It doesn’t make sense. We escaped but there’s a thousand ways it could’ve killed us. It could have… ripped out the air, or, I don’t know, burnt us, or anything. But it let us go. Why? Unless it wanted us to escape.

The Doctor: Except that implies—in this big grand scheme of Gods and Devils—that she’s just a victim. But I’ve seen a lot of this Universe. I’ve seen fake gods and bad gods and demigods and would-be gods. And out of all that, out of that whole pantheon, if I believe in one thing—just one thing—I believe in her. {he breaks the vase.}

The Doctor: This is your freedom. Free to die! You’re going into that black hole and I’m riding with you!

Zach: We’ve still lost the gravity funnel. We can’t escape the black hole.
Rose: But we stopped him. That’s what the Doctor would have done.
Zach: Some victory. We’re going in.

The Doctor: Sorry about the hijack, Captain. This is the Good Ship TARDIS. Now, first thing’s first. Have you got a Rose Tyler on board?
Rose: I’m here! It’s me! Oh my god! Where are you?
The Doctor: I’m just towing you home. Gravity schmavity. My people practically invented black holes. Well, in fact they did. Couple of minutes we’ll be nice and safe. Oh and Captain, can we do a swap? Say if you give me Rose Tyler I’ll give you Ida Scott. How about that?

Rose: It said I was going to die in battle.
The Doctor: Then it lied. Right! Onwards, upwards! Ida, see you again maybe?
Ida: I hope so.
Rose: And thanks boys!
Ida: Hang on though, Doctor. You never really said. You two, who are you?
The Doctor: Oh… the stuff of legend!