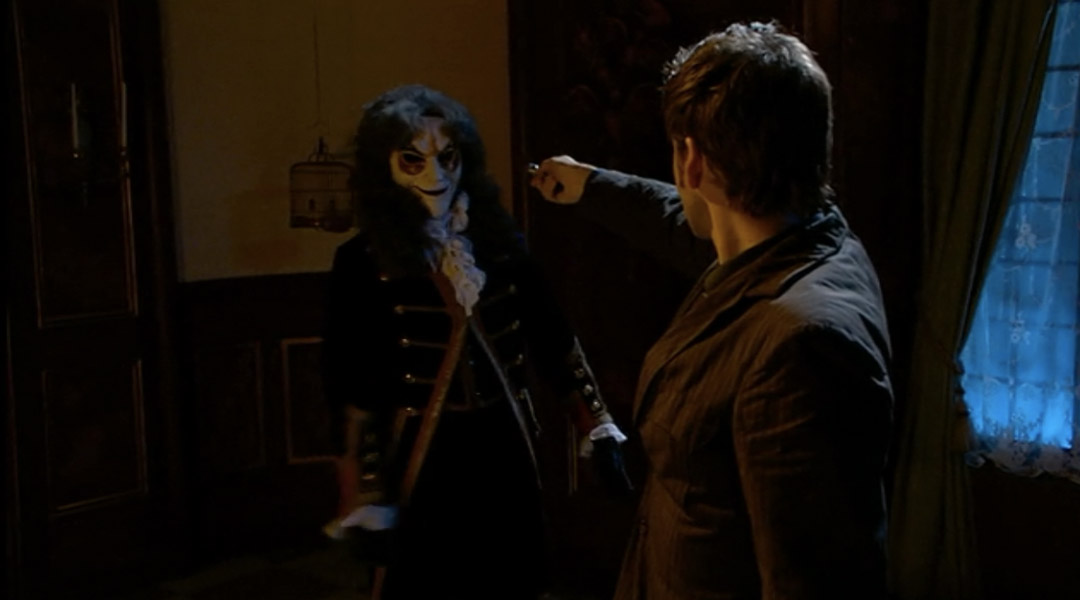 The Doctor: Dear me. Got some cowboys in here. There’s a ton of repair work going on.

Rose: Where’d all the crew go?
The Doctor: Good question. No life readings on board.
Rose: Well. We’re in deep space. They didn’t just nip out for a quick fag.
The Doctor: Nope. Checked all the smoking pods.

Reinette: Monsieur, what are you doing in my fireplace?
The Doctor: Oh it’s just a… routine fire check. Can you tell me what year it is?
Reinette: Of course I can. Seventeen hundred and twenty-seven.
The Doctor: Right. Lovely. One of my favorites. August is rubbish though. Stay indoors.

Mickey: You said this was the 51st century.
The Doctor: I also said this ship was generating enough power to punch a hole in the Universe. I think we just found the hole. Must be a spaceship with a temporal hyperlink.
Mickey: What’s that?
The Doctor: No idea. Just made it up. Didn’t want to say “Magic Door”.

The Doctor: Okay, that’s scary.
Reinette: You’re scared of a broken clock?
The Doctor: Just a bit scared, yeah. Just a little tiny bit. ‘Cause you see, if this clock’s broken—and it’s the only clock in the room… {the ticking gets louder.} Then what’s that? ‘Cause you see, that’s not a clock. You can tell by the resonance. Too big. Six feet I’d say. Size of a man.

Reinette: It is customary, I think, to have an imaginary friend only during one’s childhood. You are to be congratulated on your persistence.
The Doctor: Reinette. Well. Goodness how you’ve grown.
Reinette: And you do not appear to have aged a single day. That is tremendously impolite of you.

Reinette: How could you be a stranger to me? I’ve known you since I was seven years old.
The Doctor: Yeah. I suppose you have. I came the quick route.

Reinette: You seem to be flesh and blood at any rate, but this is absurd. Reason tells me you cannot be real.
The Doctor: Oh, you never want to listen to reason.

Manservant (Gareth Griffiths): Who the hell are you?
The Doctor: I’m the Doctor. And I just snogged Madame de Pompadour.

The Doctor: Rose? Mickey? Every time! Every time! It’s rule one. “Don’t wander off.” I tell them, I do. Rule one. There could be anything on this ship. {sees the horse}

Katherine (Angel Coulby): Speaking of wicked, I hear Madame de Châteauroux is ill and close to death.
Reinette: Yes. I am devastated.
Katherine: Oh, indeed. I myself am frequently inconsolable. The King will therefore be requiring a new mistress. You love the King, of course.
Reinette: He is the king. And I love him with all my heart. And I look forward to meeting him.

Rose: We found a camera with an eye in it. And there was a heart wired into the machinery.
The Doctor: It’s just doing what it was programmed to do. Repairing the ship any way it can with whatever it can find. No one told it the crew weren’t on the menu. What did you say the flight deck smelled of?
Rose: Someone cooking.
The Doctor: Flesh plus heat. Barbeque.

Rose: Why her? You’ve got all of history to choose from. Why specifically her?
Clockwork Woman (Ellen Thomas): We are the same.
Reinette: We are not the same. We are in no sense the same.

The Doctor: It’s back on the ship. Rose, take Mickey and Arthur, get after it, follow it. Don’t approach it, just watch where it goes.
Rose: Arthur?
The Doctor: Good name for a horse.
Rose: No, you’re not keeping the horse.
The Doctor: I let you keep Mickey. Now go go go!

Reinette: Fireplace Man. You are in my mind.
The Doctor: Oh dear, Reinette. You’ve had some cowboys in here.

Clockwork Man (Paul Kasey): You are compatible.
Rose: Well, you might want to think about that. You really really might. Because me and Mickey, we didn’t come here alone. Oh no. And trust me, you wouldn’t want to mess with our designated driver.

Rose: Oh, look at what the cat dragged in. The Oncoming Storm.
The Doctor: Mm. You sound just like your mother.
Rose: What have you been doing? Where have you been?
The Doctor: Well… among other things I think I just invented the banana daiquiri a couple of centuries early. Do you know they’d never even seen a banana before. Always take a banana to a party, Rose. Bananas are good.

The Doctor: Oh ho ho… brilliant! It’s you! You’re my favorite, you are. You are the best. You know why? ‘Cause you’re so thick! You’re Mr. Thick Thick Thickety Thickface from Thicktown. Thickania! … And so’s your dad.

The Doctor: Multi-grade Anti-oil. If it moves, it doesn’t.

The Doctor: Alright. Many things about this are not good.

Reinette: The monsters and the Doctor. It seems you cannot have one without the other.
Rose: Tell me about it. The thing is, you weren’t supposed to have either. Those creatures are messing with history. None of this was ever supposed to happen to you.
Reinette: “Supposed to happen”. What does that mean? It happened, child. And I would not have it any other way. One may tolerate a world of demons for the sake of an angel.

Reinette: Those screams. Is that my future?
Rose: Yeah. I’m sorry.
Reinette: Then I must take the slower path.

Rose: Are you okay?
Reinette: No. I’m very afraid. But you and I know—don’t we, Rose—the Doctor is worth the monsters.

Reinette: I have made a decision. And my decision is no. I shall not be going with you today. I have seen your world and I have no desire to set foot there again.
Clockwork Man: We do not require your feet.

Reinette: You think I fear you. But I do not fear you even now. You are merely the nightmare of my childhood. The monster from under my bed. And if my nightmare can return to plague me then rest assured, so will yours.

King Louis: What the hell is going on?
Reinette: Oh. This is my lover, the King of France.
The Doctor: Yeah? Well I’m the Lord of Time.

The Doctor: It’s over. Accept that. I’m not winding you up.

Reinette: So here you are, my lonely angel. Stuck on the slow path with me.

The Doctor: Give me two minutes. Pack a bag.
Reinette: Am I going somewhere?
The Doctor: Go to the window. Pick a star. Any star.

King Louis: And there she goes. Leaving Versailles for the last time.

Rose: You all right?
The Doctor: I’m always all right.

Reinette: My Dear Doctor, The path has never seemed so slow, and yet I fear I am nearing its end. Reason tells me that you and I are unlikely to meet again, but I think I shall not listen to reason. I have seen the world inside your head and know that all things are possible. Hurry though, my love. My days grow shorter now and I am so very weak. God speed, my lonely angel.