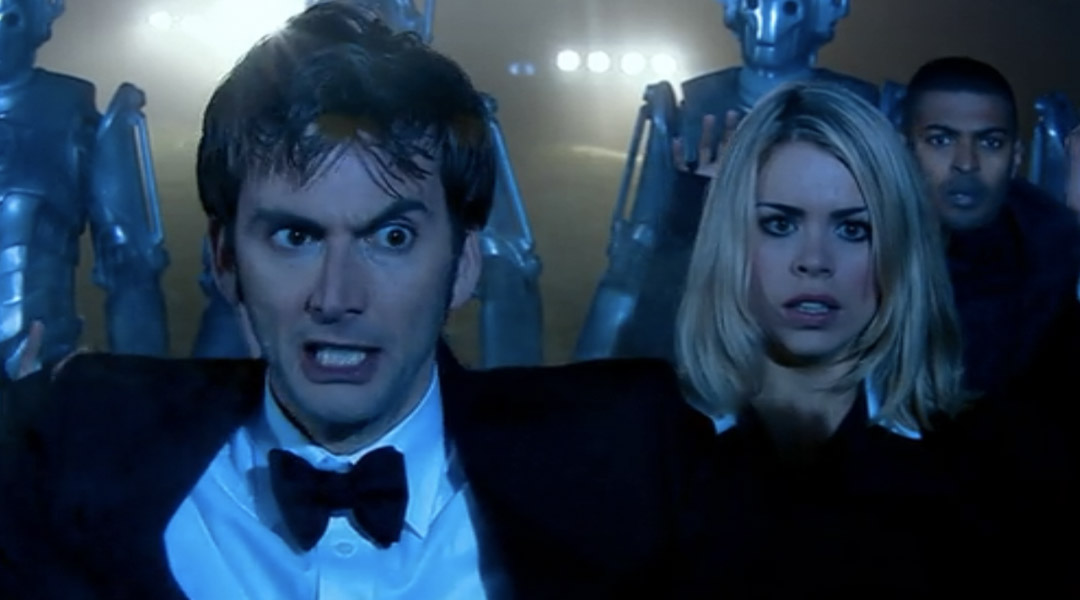 The Doctor: She’s dead. The TARDIS is dead.
Rose: You can fix it?
The Doctor: There’s nothing to fix. She’s perished. The last TARDIS in the Universe, extinct.
Rose: We can get help, yeah?
The Doctor: Where from?
Rose: Well, we’ve landed. We’ve got to be somewhere.
The Doctor: We fell out of the Vortex. Through the Void into nothingness. We’re in some sort of noplace. A silent realm. A lost dimension.
Mickey looking outside: Otherwise known as London.

The Doctor: This is not your world.
Mickey: But if the date’s the same…. It’s parallel, right? Am I right, like a parallel Earth where they’ve got Zeppelins? Am I right? I’m right, aren’t I?
The Doctor: Must be.
Rose: So a parallel world where—
Mickey: Oh come on, you’ve seem it on films. Like an alternative to our world, where everything’s the same but a little bit different. Like, I don’t know, traffic lights are blue. Tony Blair never got elected.
Rose: And he’s still alive. A parallel world where my dad’s still alive.

Alt-Jackie Tyler (Camille Coduri): Look, you didn’t even notice did you? {shows him the earpiece.} Special delivery. Got sent round today. Birthday present from Mr. Lumic. Latest model. Diamond-studded. Pick up signals from Venezuala.
Alt-Pete Tyler (Shaun Dingwall): Why would you want to pick up signals from Venezuela?
Alt-Jackie: Well I don’t know. But now I can find out.

Lumic (Roger Lloyd Pack): If the president of Great Britain can make this meeting then so can you.
Alt-Pete: I don’t know, he’s not married to Jackie is he.

Mickey: I’ve seen it in comics. People are popping from one alternative world to another. It’s easy.
The Doctor: Not in the real world. Used to be easy. When the Time Lords kept their eye on everything. You could pop between realities, home in time for tea. Then they died and took it all with them. The walls of reality closed. The worlds were sealed. And everything became a bit less kind.

The Doctor: I just gave away ten years of my life. Worth every second!

Rose: I don’t exist.
The Doctor: What do you mean?
Rose: There’s no Rose Tyler. I was never born.

The President (Don Warrington): I tried your drink—that Vitex stuff. It tastes like POM.
Pete: Well it is POM.
The President: You made money by selling a health food drink to a sick world. Not quite the ordinary Joe you appear to be, are you?

The Doctor: I never knew.
Rose: You never asked.
The Doctor: You never said.
Rose: It’s Mickey. I suppose I— we just… take him for granted.

The most precious thing on Earth is the human brain, and yet we allow it to die. But now, Cybus Industries has perfected a way of sustaining the brain indefinitely within a cradle of copyrighted chemicals.

Ricky: He’s flesh and blood. How did that happen?
Mrs. Moore (Helen Griffin): Well it could be that Cybus Industries have perfected the science of human cloning. Or your father had a bike?

Ricky: You’re talking to London’s most wanted. But target number one is Lumic and we are going to bring him down.
Mickey: From your kitchen.
Ricky: Have you got a problem with that?
Mickey: No. It’s a good kitchen.

Rose: Mrs. Tyler, is there anything I can get you?
Jackie: The last twenty years back.
Rose: I can manage a glass of champagne or a nice cup of tea.

Rose: What, are they, robots?
The Doctor: Worse than that.
President: Who were these people?
Lumic: Doesn’t matter.
Rose: They’re people.
The Doctor: They were. ‘Til they had all their humanity taken away. It’s a living brain jammed inside a cybernetic body. With a heart of steel. All emotions removed.
Rose: Why no emotion?
The Doctor: Because it hurts.