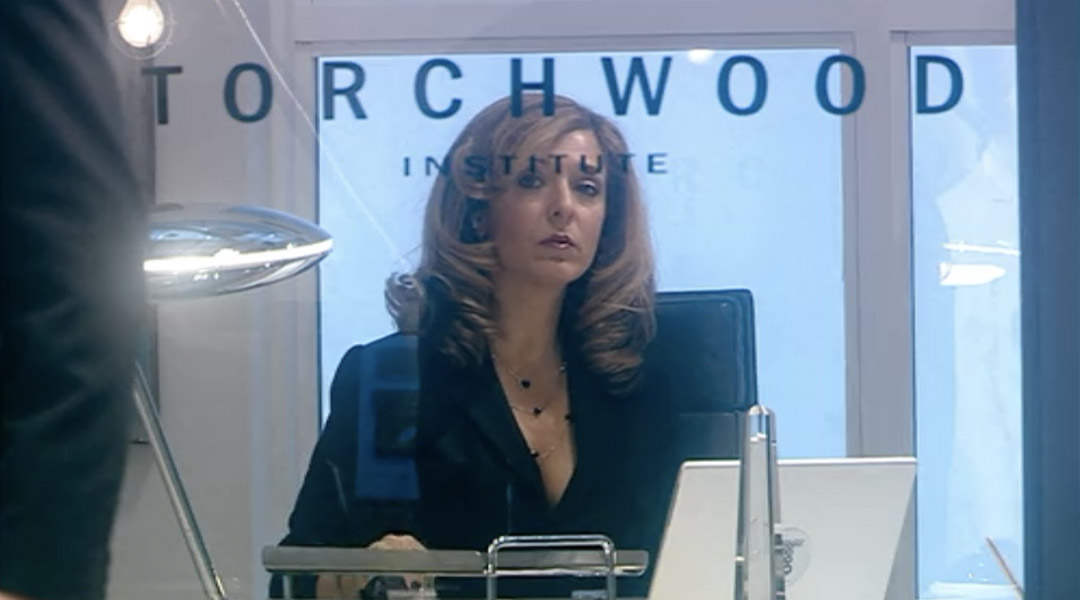 Rose: This is the story of how I died…

Jackie (Camille Coduri): But you can see them. They look human.
Rose: She’s got a point. They are sort of blurred, but they’re definitely people.
The Doctor: Maybe not. They’re pressing themselves into the surface of the world. But a footprint doesn’t look like a boot.

Dr. Rajesh Singh (Raji James): The machines keep saying the sphere can’t exist. But there it is.

Rose: According to the paper, they’ve elected a ghost as MP for Leeds. Now don’t tell me you’re going to sit back and do nothing.
The Doctor: Who you gonna call?
Rose: Ghostbusters!
The Doctor: I ain’t afraid of no ghosts.

Jackie: You’ve changed so much.
Rose: For the better.
Jackie: I suppose.
Rose: Mum, I used to work in a shop.
Jackie: I’ve worked in shops. What’s wrong with that?

Jackie: Do you think you’ll ever settle down?
Rose: The Doctor never will, so I can’t. I’ll just keep on traveling.
Jackie: And he’ll keep on changing. And in forty years time, fifty, they’ll be this woman, this strange woman walking through the marketplace. On some planet a billion miles from Earth. But she’s not Rose Tyler. Not anymore. She’s not even human.

The Doctor: Not so friendly now, are you?

Rose: My mum’s still on board.
Jackie: If we end up on Mars I’m gonna kill you.

The Doctor: Hm. There goes the advantage of surprise. Still, cuts to the chase. Stay here, look after Jackie.
Rose: I’m not looking after my mum.
The Doctor: Well you brought her.
Jackie: I was kidnapped!
Rose: Doctor, they’ve got guns.
The Doctor: And I haven’t. Which makes me the better person, don’t you think? They can shoot me dead but the moral high ground is mine.

Yvonne Hartman (Tracy-Ann Oberman): It was only a matter of time before you found us. Welcome to Torchwood.

Yvonne: Torchwood Institute has a motto: If it’s alien it’s ours.

The Doctor: This is a Void ship.
Yvonne: And what is that?
The Doctor: Well it’s impossible, for starters. I always thought it was just a theory, but…. It’s a vessel designed to exist outside time and space. Traveling through the Void.
Dr. Singh: And what’s the Void?
The Doctor: The space between dimensions. There’s all sorts of realities around us—different dimensions. Billions of parallel universes all stacked up against each other. The Void is in between, containing absolutely nothing. Imagine that—no light, no dark, no up, no down. No life. No time. Without end. My people called it The Void, the Eternals called it The Howling. But some people call it Hell.

The Doctor: You built a skyscraper just to reach a spatial disturbance. How much money have you got?
Yvonne: Enough.

The Doctor: So you find the breach, probe it, the sphere comes through. Six hundred feet above London. Bam! It leaves a hole in the fabric of reality. And that hole, you think, “Oh, should we leave it alone? Should we back off? Should we play it safe?” “Nah!” you think, “Let’s make it bigger!”

Yvonne: They did warn me, Doctor. They said you liked to make a mess.

Yvonne: Well if that’s Rose Tyler, who’s she?
Jackie: I’m her mother.
Yvonne: Oh, you travel with her mother?
Jackie: He kidnapped me.
The Doctor: Please, when Torchwood comes to write my complete history, don’t tell people I traveled through time and space with her mother.

Mickey: It’s alright babe. We beat ’em before, we can beat ’em again. That’s why I’m here. The fight goes on.
Rose: The fight against what?
Mickey: What d’ya think?

Yvonne: They’re invading the whole planet.
The Doctor: It’s not an invasion. It’s too late for that. It’s a victory.

Dr. Singh: Samuel, what are you doing?
Mickey: The name’s Mickey. Mickey Smith. Defending the Earth.