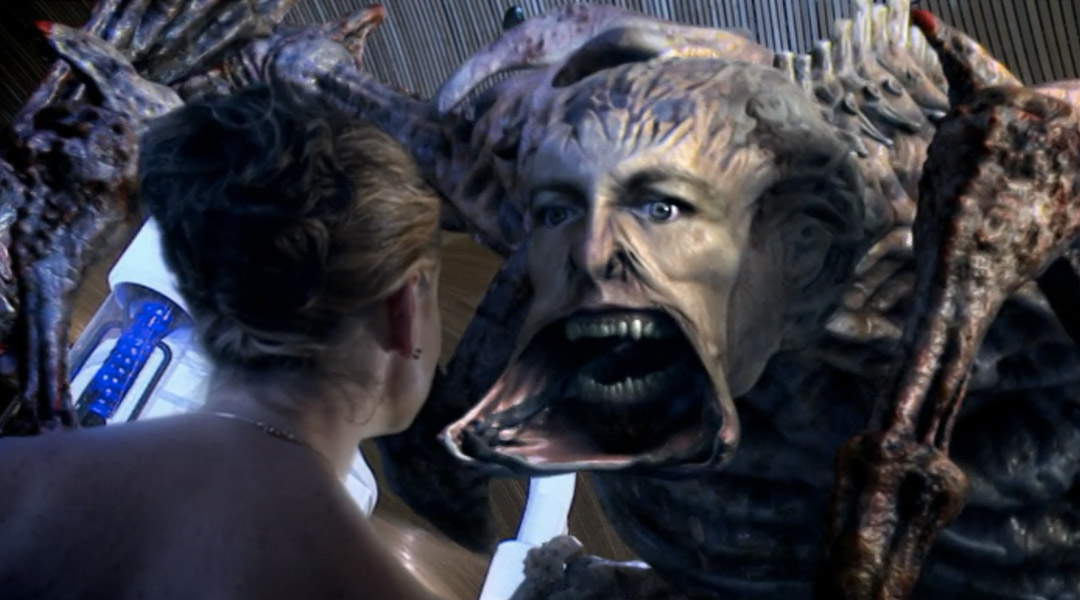 The Doctor: There we go! Perfect landing! Which isn’t easy in such a tight spot.
Martha: You should be used to tight spots by now. Where are we?
The Doctor: The end of the line. No place like it.
Martha: Home. You took me home.
The Doctor: Back to the morning after we left. I’d say you’ve only been gone about twelve hours. No time at all, really.
Martha: But all that stuff we’ve gone? Shakespeare. New New York. Old New York.
The Doctor: Yeah. All in one night. Relatively speaking.

The Doctor: So, back where you were. As promised.
Martha: This is it?
The Doctor: Yeah.

Professor Richard Lazarus (Mark Gatiss): With the push of a single button, I will change what it means to be human.

The Doctor: One trip, that’s what we said.
Martha: Okay. I suppose things just kind of escalated.
The Doctor: Hm. Seems to happen to me a lot.
Martha: Thank you. For everything.
The Doctor: It was my pleasure. {leaves and then…} No, I’m sorry. Did he say he was going to change what it means to be human?

Lady Thaw (Thelma Barlow): Are you sure it’s safe?
Professor Lazarus: There were some issues, they’ve been resolved. I’m confident I’m in no serious danger.
Lady Thaw: That’s comforting, Richard. But it wasn’t just you I was worried about.
Professor Lazarus: Your concern is touching.
Lady Thaw: The people in that room will represent billions of pounds worth of potential investment. Mr. Saxon wants to be sure they like what they see.
Professor Lazarus: Don’t worry, our friend will get his money’s worth.

The Doctor: Black tie. You know whenever I wear this something bad happens.
Martha: That’s not the outfit, that’s just you. Anyway I think it suits you. In a James Bond kind of way.

The Doctor: Oh look. They’ve got nibbles! I love nibbles!

The Doctor: So do you know what the professor’s going to be doing tonight? That looks like it might be a sonic microfilm manipulator.
Tish: He’s a science geek. I should have known.

Professor Lazarus: I am Professor Richard Lazarus and tonight I am going to perform a miracle. It is, I believe, the most important advance since Rutherford split the atom. The biggest leap since Armstrong stood on the moon. Tonight you will watch and wonder. And tomorrow you will wake to a world which will be changed forever.

Professor Lazarus: Ladies and gentlemen, I am Richard Lazarus. I am seventy-six years old. And I am reborn!

Martha: That can’t be the same guy. That’s impossible. It must be a trick.
The Doctor: Oh, it’s not a trick. I wish it were.
Martha: What just happened then?
The Doctor: He just changed what it means to be human.

Lady Thaw: The device will be properly certified before we start to operate commercially.
Martha: Commercially? You are joking. That’ll cause chaos.
Professor Lazarus: Not chaos. Change. A chance for humanity to evolve—to improve.
The Doctor: This isn’t about improving. This is about you and your customers living a little longer.
Professor Lazarus: Not a little longer, Doctor. A lot longer. Perhaps indefinitely.

The Doctor: Oo. He’s out of his depth. No idea the damage he might have done.
Martha: So what do we do now?
The Doctor: Now. Well this building must be full of laboratories. I say we do our own tests..
Martha: Lucky I’ve just collected a DNA sample then, isn’t it?
The Doctor: Oh Martha Jones. You’re a star.

The Doctor: Basically he hacked into his own genes and instructed them to rejuvenate.
Martha: But they’re still mutating now.
The Doctor: Because he missed something.

Lazarus: You think I’d waste another lifetime on you?
Lady Thaw: Did that process make you even more cruel?
Lazarus: No, my love. That I learned from you. You have a gift for it.
Lady Thaw: Then you know that I’ll protect my involvement in the project. I’m sure Mr. Saxon will be interested.

Stranger (Bertie Carvel): Do you know that man?
Francine: No. He’s a friend of my daughter’s.
Stranger: Perhaps she should choose her friends more carefully.

Lazarus: “Between the idea and reality. Between the motion and the act—”
The Doctor: “—falls the shadow.”
Lazarus: So the mysterious Doctor knows his Eliot. I’m impressed.

Tish: You have to spoil everything, don’t you? Every time I find someone nice you try and have to find fault.
Martha: Tish, he’s a monster!
Tish: I know the age thing’s pretty freaky, but it works for Catherine Zeta-Jones.

The Doctor: Listen to me! You people are in serious danger. You need to get out of here right now.
Woman: Don’t be ridiculous, The biggest danger here is choking on an olive.

The Doctor: What’s the point? You can’t control it. The mutation’s too strong. Killing those people won’t help you. You’re a fool. A vain old man who thought he could defy nature. Only nature got her own back, didn’t she? You’re a joke, Lazarus! A footnote in the history of failure.

Tish: What’s the Doctor doing?
Martha: He’s trying to buy us some time. Let’s not waste it.

Lazarus: It’s no good, Doctor. You can’t stop me.
The Doctor: Is that the same arrogance you had when you swore nothing had gone wrong with your device?
Lazarus: The arrogance is yours. you can’t stand in the way of progress.
The Doctor: You call feeding on innocent people progress? You’re delusional!
Lazarus: It is a necessary sacrifice.
The Doctor: That’s not your decision to make.

Martha: I’ve got to go back.
Francine: You can’t! You saw what that thing did. It’ll kill you.
Martha: I don’t care. I have to go.
Francine: It’s that doctor, isn’t it? That’s what’s happened to you. You’ve changed.

Lazarus: More hide-and-seek, Doctor? How disappointing. Why don’t you come out and face me?
The Doctor: Have you looked in the mirror lately? Why would I want to face that. Hm?

The Doctor: What are you doing here?
Martha: I’m returning this. I thought you might need it.
The Doctor: How’d you—?
Martha: I heard the explosion, I guessed it was you.
The Doctor: I blasted Lazarus.
Martha: Did you kill him? {Lazarus crashes through the door}
The Doctor: More sort of annoyed him, I would say.

Martha: But we’re trapped.
The Doctor: Well. Yeah, that is a slight problem.
Martha: You mean you don’t have a plan?
The Doctor: Yes. The plan was to get inside here.
Martha: Then what?
The Doctor: Well… Then I’d come up with another plan.
Martha: In your own time then.

Martha: I still don’t understand where that thing came from. Is it alien?
The Doctor: No, for once it’s strictly human in origin.
Martha: Human? How can it be human?
The Doctor: Probably from dormant genes in Lazarus’ DNA. The energy field in this thing must have reactivated them. And it looks like they’re becoming dominant.
Martha: So it’s a throwback.
The Doctor: Some option that evolution rejected for you millions of years. But the potential is still there. Locked away in your genes, forgotten about until Lazarus unlocked it by mistake.
Martha: It’s like Pandora’s box?
The Doctor: Exactly. Nice shoes by the way.

Martha: Doctor, what’s happening?
The Doctor: Sounds like he switched the machine on.
Martha: And that’s not good, is it.
The Doctor: Well I was hoping it was going to take him a little bit longer to work that out.

Martha: I thought we were going to go through the blender then.
The Doctor: Really shouldn’t take that long to reverse the polarity. I must be a bit out of practice.

Martha: He seems so… human again. He’s kind of pitiful.
The Doctor: Eliot saw that too. “This is the way the world ends. Not with a bang but a whimper.”

The Doctor: Ah Mrs. Jones. We still haven’t finished our chat.
Francine Jones slapping him: Keep away from my daughter!
Martha: Mum what are you doing?
The Doctor: Always the mothers, every time.
Francine: He is dangerous! I’ve been told things!

The Doctor: Lazarus. Back from the dead. I should have known really.

The Doctor: Facing death is part of being human. You can’t change that.
Lazarus: No, Doctor! Avoiding death. That’s being human. It’s our strongest impulse. To cling to life with every fiber of being. I’m only doing what everyone before me has tried to do. I’ve simply been more… successful.
The Doctor: Look at yourself! You’re mutating. You’ve no control over it. You call that a success?
Lazarus: I call it progress. I’m more now than I was. More than just an ordinary human.
The Doctor: There’s no such thing as an ordinary human.

Lazarus: You so sentimental Doctor. Maybe you are older than you look.
The Doctor: I’m old enough to know that a longer life isn’t always a better one. In the end you just get tired. Tired of the struggle. Tired of losing everyone that
matters to you. Tired of watching everything turn to dust. If you live long enough, Lazarus, the only certainty left is that you’ll end up alone.
Lazarus: That’s a price worth paying.

Lazarus: I will feed soon.
The Doctor: I’m not going to let that happen.

The Doctor: We need to turn this up to eleven.

Martha: Thanks.
Tish: It’s your doctor you should be thanking.
Martha: I told you he’d think of something.
Tish: He cut it a bit fine there, didn’t he?
Martha: He always does. It’s more fun that way.
Tish: Who is he?
Martha: He’s… he’s The Doctor.

Martha: I didn’t know you could play.
The Doctor: Oh, you know. If you hang around Beethoven you’re bound to pick a few things up.
Martha: Especially about playing loud.
The Doctor: Sorry?

The Doctor: Something else that just kind of escalated then.
Martha: I can see a pattern developing. You should take more care in the future. And the past. And whatever other time period you find yourself in.
The Doctor: It’s been fun though, hasn’t it?
Martha: Yeah.
The Doctor: So what d’ya say? One more trip?
Martha: No. Sorry.
The Doctor: What do you mean? I thought you liked it.
Martha: I do. But I can’t go on like this, “one more trip.” It’s not fair.
The Doctor: What are you talking about?
Martha: Well I don’t want to be just a passenger anymore. Someone that you take along for a treat. If that’s how you still see me, I’d rather stay here.
The Doctor: Okay then. If that’s what you want.
Martha: Alright. Well we’ve already said goodbye once today, it’s best if you just go. {he doesn’t go} What is it?
The Doctor: Well I said okay.
Martha: Sorry?
The Doctor: Okay.
Martha: Oh, thank you! Thank you!
The Doctor: Well you were never really just a passenger were you?