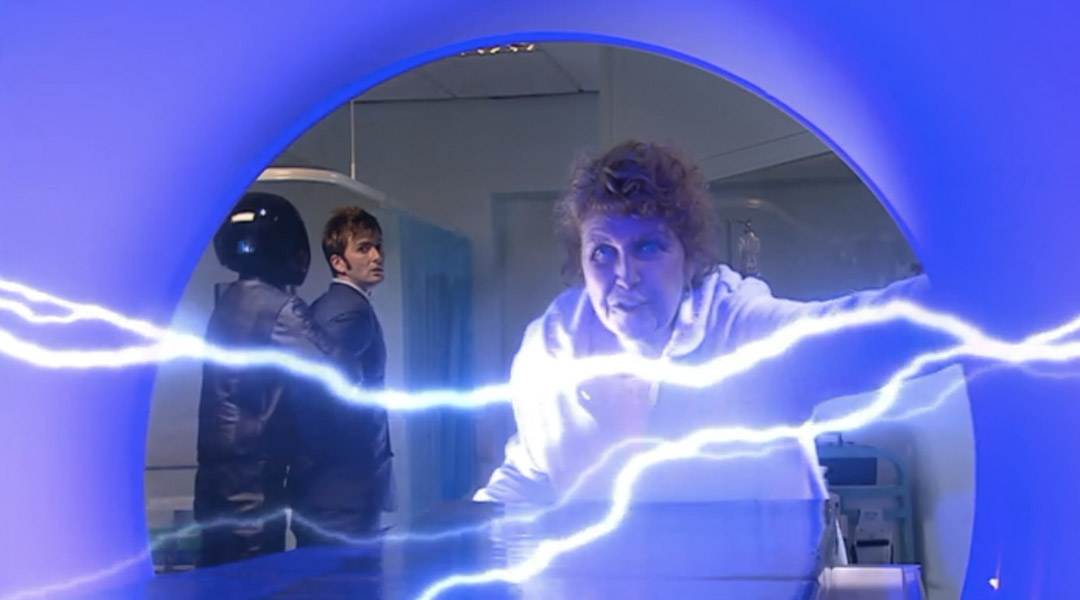 The Doctor popping up: Like so. {he takes off his tie} See?

Mr. Stoker: Hippocrates himself expounded on the virtues of salt. Recommended the inhalation of steam from sea water. Though no doubt if he’d he been afflicted with my students results his oaths might have been rather more colorful.

Mr. Stoker: John Smith. Admitted yesterday with severe abdominal pains. Jones why don’t you see what you can find. Amaze me.
Martha Jones: That wasn’t very clever running around outside, was it?
The Doctor: Sorry?
Martha: On Chancellor Street this morning. You came up to me and took your tie off.
The Doctor: Really? What’d I do that for?
Martha: I don’t know, you just did.

Martha: Have you got a brother?
The Doctor: No. Not anymore. Just me.

Julia Swales: Martha, it’s night. It was lunchtime.
Martha: It’s not night.
Julia Swales: It’s got to be. It’s dark.
Martha: We’re on the Moon.

Martha: It’s real. It’s really real. Hold on— {She goes to open the window}
Swales: Don’t! We’ll lose all the air.
Martha: But they’re not exactly airtight. If the air was gonna get sucked out it would have happened straight away, but it didn’t. So how come?
The Doctor: Very good point. Brilliant, in fact. What’s your name?
Martha: Martha.
The Doctor: And it was Jones, wasn’t it?

The Doctor: Martha what have we got, is there a balcony on this floor or a veranda, or—
Martha: By the patient’s lounge, yeah.
The Doctor: Fancy going out?
Martha: Okay.
The Doctor: We might die.
Martha: We might not.
The Doctor: Good. Come on.

Martha: We’ve got air. How does that work?
The Doctor: Just be glad it does.

The Doctor: One thousand people. Suffocating.
Martha: Why would anyone do that? {a ship sounds overhead.}
The Doctor: Heads up. Ask them yourself.

Ms. Finnegan (Anne Reid): Mr. Stoker? I’m sorry, I didn’t know who else to ask. But can you help me?
Stokes: I think we’ve gone beyond aspirin.

Ms. Finnegan: You see, I was only salt-deficient because I’m sorry very good at absorbing it. But now I need fire in my veins. And who better than a consultant, with blood full of salty fats and vintage wines. And all those Michelin star sauces. {she smacks her lips.}
Stokes: Who are you?
Ms. Finnegan: Oh I’m a survivor, Mr. Stoker. At any cost. Look! I even brought a straw.

The Doctor: Oh look down there! You’ve got a little shop. I love a little shop.
Martha: Never mind that! What are Judoon?
The Doctor: They’re police. Well, police for hire. They’re more like interplanetary thugs.
Martha: And they brought us to the moon?
The Doctor: Neutral territory. According to galactic law they’ve got no jurisdiction over the Earth and they’ve isolated it. That rain, lightning. That was them. Using an H2O scoop.

Martha: If they’re police, are we under arrest? Are we trespassing on the moon or something?
The Doctor: No. But I like that! Good thinking. No, I wish it were that simple. They’re making a catalog, that means they’re after something non-human which is very bad news for me.
Martha: Why? {he looks at her.} Oh, you are kidding me. Don’t be ridiculous. Stop looking at me like that.

The Doctor: When I say “now,” press the button.
Martha: But I don’t know which one!
The Doctor: Then find out.

Martha: You’re completely mad.
The Doctor: You’re right. I look daft with one shoe. Barefoot on the moon!

The Doctor: Well you’re welcome to come home, meet the wife. She’d be honored. We can have cake.
Ms. Finnegan: Why should I have cake? I’ve got my little straw!
The Doctor: That’s nice. Milkshake? I love banana!

Judoon (Nicholas Briggs): You will need this.
Martha: What’s that for?
Judoon: Compensation.

Judoon: Confirm. Plasmavore. Charged with the crime of murdering the Child Princess of Padrivole Regency Nine.
Finnegan: Well she deserved it!

The Doctor: I just thought, since you saved my life and I’ve got a brand new sonic screwdriver which needs road testing, you might fancy a trip.
Martha: What, into space?
The Doctor: Well.
Martha: But I can’t. I’ve got exams. I’ve got things to do. I’ve got to go into town first thing and pay the rent. I’ve got my family going mad—
The Doctor: If it helps, I can travel in time as well.
Martha: Get out of here.
The Doctor: I can.
Martha: Come on now. That is going too far.
The Doctor: I’ll prove it. {he leaves and returns holding his tie} Told ya.
Martha: No, but— that was this morning. But, did you? Oh my god you can travel in time. But hold on, if you could see me this morning why didn’t you tell me not to go into work?
The Doctor: Crossing into established events is strictly forbidden. Except for cheap tricks.

The Doctor: Just one trip. To say thanks! You get one trip then back home. I’d rather be on my own.