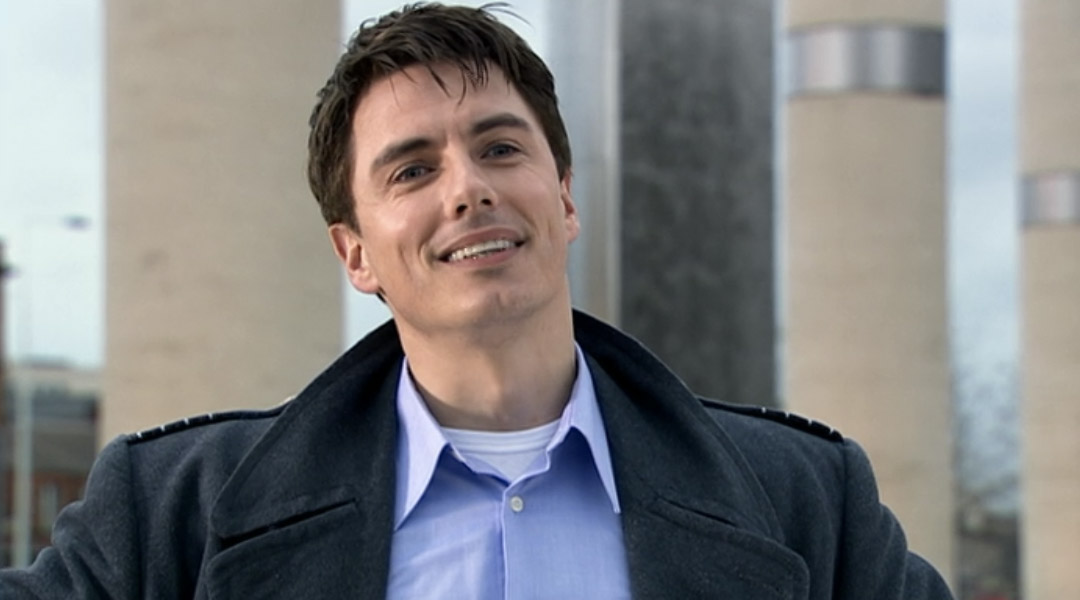 Martha: It’s a bit odd though. Not very one hundred trillion. That coat’s more like World War II.
The Doctor: I think he came with us.
Martha: How d’you mean? He’s from Earth?
The Doctor: Must have been clinging to the outside of the TARDIS. All the way through the vortex. Wow, that’s very him.
Martha: What, do you know him?
The Doctor: A friend of mine. Used to travel with me.

Jack: Captain Jack Harkness. And who are you?
Martha: Martha Jones.
Jack: Nice to meet you Martha Jones.
The Doctor: Oh don’t start!
Jack: I was only saying hello.
Martha: I don’t mind.
Jack: Doctor.
The Doctor: Captain.
Jack: Good to see you.
The Doctor: And you. Same as ever. Although. Have you had work done?
Jack: You can talk.

Martha: But the thing is, how come you left him behind Doctor?
The Doctor: I was busy.
Martha: Is that what happens though, seriously? You just get bored of us one day and disappear.
Jack: Not if you’re blonde.
Martha: Oh she was blonde! Oh, what a surprise.
The Doctor: You two! We’re at the end of the Universe. Right at the edge of knowledge itself. And you’re busy blogging!

Jack: They must have an atmospheric shell. We should be frozen to death.
The Doctor: Well, Martha and I maybe. Not so sure about you, Jack.

Jack: Oh, don’t tell him to put his gun down.
The Doctor: He’s not my responsibility.
Jack: And I am? Ha, that makes a change.

Jack: Captain Jack Harkness.
The Doctor: Stop it!
Jack: Can’t I say hello to anyone?
Chantho: Chan- I do not protest -tho.
Jack: Maybe later.

Jack: So what about those things outside? The Beastie Boys. What are they?

The Doctor: It strikes me, Professor, you’ve got a room which no man can enter without dying. Is that correct?
The Professor: Yes.
The Doctor: Well. Jack is revived I think I’ve got just the man.
Jack: Was someone kissing me?

The Doctor: What are you taking your clothes off for?
Jack: I’m going in.
The Doctor: From the looks of it, I’d say the stet radiation doesn’t affect clothing, only flesh.
Jack: Well. I look good though. How long have you known?
The Doctor: Ever since I ran away from you. Good luck.

The Doctor: When did you realize it?
Jack: Earth. 1892. Got in a fight on Ellis Island. A man shot me through the heart. Then I woke up.

Jack: In the end I got the message: I’m the man who can never die. And all that time you knew.
The Doctor: That’s why I left you behind. It’s not easy, just looking at you, Jack.
‘Cause you’re wrong.
Jack: Thanks.
The Doctor: You are. I can’t help it.

Jack: The last thing I remember, back when I was mortal, I was facing three Daleks. Death by extermination. And then I came back to life. What happened?
The Doctor: Rose.
Jack: I thought you’d sent her back home.
The Doctor: She came back. Opened up the heart of the TARDIS and absorbed the Time Vortex itself.
Jack: What does that mean exactly?
The Doctor: No one’s ever meant to have that power.
If a Time Lord did that he’d become a god—a vengeful god. But she was human. Everything she did was so human. She brought you back to life. But she couldn’t control it. She brought you back forever. That is something, I suppose. The final act of the Time War was life.

Jack: I went to her estate in the 90s. Just once or twice. Watched her growing up. Never said hello. Timelines and all that.

The Doctor: Do you want to die?
Jack: This one’s a little stuck.
The Doctor: Jack.
Jack: I thought I did. I don’t know. But this lot—you see them out here surviving. And that’s fantastic!
The Doctor: You might be out there somewhere.
Jack: I could go meet myself.
The Doctor: Well. The only man you’re ever going to be happy with.
Jack: This new regeneration, it’s kinda cheeky!

The Face of Boe: You Are Not Alone.

The Sound of Drums

Jack: Still, at least we made it. Earth. Twenty-first century by the looks of it. Talk about lucky.
The Doctor: That wasn’t luck. That was me.

Jack: The moral is, if you’re going to get stuck at the end of the universe, get stuck with an ex-Time Agent and his vortex manipulator.
Martha: But this Master bloke. He’s got the TARDIS. He could be anywhere in time and space.
The Doctor: No, he’s here. Trust me.

The Doctor: Jack, who are you phoning? You can’t tell anyone we’re here.
Jack: Just some friends of mine, but there’s no reply.
Martha handing him her laptop: Here you go. Any good?
Jack: I can show you the Saxon web site. He’s been around for ages.
Martha: That’s so weird though. It was the day after the election. That’s only four days after I met you.
The Doctor: I’ve been flying all around the universe while he was here all the time.

Jack: Former Minister of Defence. First came to prominence when he shot down the Racnoss on Christmas Eve. Nice work, by the way.
The Doctor: Oh, thanks.

The Master: You’re public enemies number one, two and three. Oh, and you can tell handsome Jack that I’ve sent his little gang off on a wild goose chase to the Himalayas. So you won’t be getting any help from them. Now go on, off you go. Why not start by turning to the right?
The Doctor: He can see us. {disables the CCTV}
The Master: Oh you public menace! Better start running. Go on, run.
The Doctor: He’s got control of everything.
Martha: What do we do?
Jack: We’ve got nowhere to go.
Martha: Doctor, what do we do?
The Master: Run, Doctor. Run for your life!
The Doctor: We run.

Jack: So Doctor, who is he? How come the ancient society of Time Lords created a psychopath?
Martha: And what is he to you? A colleague or—
The Doctor: A friend, at first.
Martha: I thought you were going to say he was your secret brother or something.
The Doctor: You’ve been watching too much TV.

Jack: Since we’re telling stories, um, there’s something I haven’t told you.

The Doctor: You work for Torchwood?
Jack: I swear to you, it’s different, it’s changed. There’s only a half dozen of us now.
The Doctor: Everything Torchwood did and you’re part of it.
Jack: The old regime was destroyed at Canary Wharf. I rebuilt it, I changed it. And when I did that, I did it for you, in your honor.

Vivien Rook: If I haven’t returned to my desk by twenty-two hundred this file will be emailed to Torchwood. Which means if you’re watching this, then I’m… Anyway, the Saxon files are attached. But take a look at the Archangel document. That’s when it all started. When Harry Saxon became minister in charge of watching the Archangel Network.
The Doctor: What’s the Archangel Network?
Martha: I’ve got Archangel. Everyone’s got it.
Jack: It’s a mobile phone network. ‘Cause look, it’s gone worldwide. They’ve got fifteen satellites in orbit. Even the other networks, they’re all carried by Archangel.
The Doctor: It’s in the phones!

Martha: It’s like, I know you’re there, but I don’t wanna know.
The Doctor: And back again! See. It just shifts your perception a tiny little bit. Doesn’t make us invisible, just unnoticed. Oh! I know what’s it like: it’s like when you fancy someone and they don’t even know you exist. That’s what it’s like.
Jack to Martha: You too, huh?

Martha: I’m going to kill him.
Jack: What say I use the perception filter to walk up behind him and break his neck.
The Doctor: Now that sounds like Torchwood.
Jack: Still a good plan.
The Doctor: He’s a Time Lord. Which makes him my responsibility. I’m not here to kill him. I’m here to save him.

The Doctor: As soon as this hits red it activates. At this speed it’ll trigger at two minutes past eight.
Jack: First contact is at eight, then two minutes later…
Martha: What’s it for? What does a paradox machine do?
Jack: More important, can you stop it?
The Doctor: Not until I know what it’s doing. Touch the wrong bit it’ll blow up the solar system.
Martha: Then we’ve got to get to The Master.
Jack: Yeah, how’re we going to stop him?
The Doctor: Oh, I’ve got a way. Sorry, didn’t I mention it? {he grins}

Last of the Time Lords

Jack: Morning, Tish! Ah, smell that sear air. Makes me long for good old British fish and chips. And what do I get? Cold mash swede. Some hotel. Last time I book over the internet. {she signals him and he winks}

Guard: We can’t get in, we’ll get slaughtered!
Jack: Yeah. Happens to me a lot. {he runs in}

Jack: So. What do we do with this one?
Clive: We kill him.
Tish: We execute him.
The Doctor: No. That’s not the solution.
Francine: Oh, I think so. ‘Cause all those things, they still happened because of him. I saw them.
The Master: Go on! Do it!
The Doctor: Francine, you’re better than him.

The Master: You still haven’t answered the question. What happens to me?
The Doctor: You’re my responsibility from now on. The only Time Lord left in existence.
Jack: Yeah, but you can’t trust him.
The Doctor: No. The only safe place for him is the TARDIS.

Martha: Time was, every single one of these people knew your name. Now they’ve all forgotten you.
The Doctor: Good.
Jack: Back to work.
The Doctor: I really don’t mind, though. Come with me.
Jack: Had plenty of time to think that past year—the year that never was—and I kept thinking about that team of mine. Like you said, Doctor: “responsibility”.
The Doctor: Defending the Earth. Can’t argue with that. {he grabs his wrist teleport}
Jack: Hey, I need that!
The Doctor: I can’t have you walking around with a time travelling teleport. You could go anywhere. Twice! The second time to apologize.
Jack: And what about me? Can you fix that? Will I ever be able to die?
The Doctor: Nothing I can do. You’re an impossible thing, Jack.
Jack: Been called that before. Sir. Ma’am. {he salutes, turns and then} But I keep wondering. What about aging? Because I can’t die but I keep getting older. The odd little gray hair, you know. What happens if I live for a million years?
The Doctor: I really don’t know.
Jack: Okay, vanity. Sorry. Yeah. Can’t help it. Used to be a poster boy, when I was a kid, living in the Boeshane Peninsula. Tiny little place. I was the first one ever to be signed up for the Time Agency. They were so proud of me. The Face of Boe, they called me. Hm. I’ll see you. {he runs off leaving the two shell shocked}
The Doctor: No.
Martha: It can’t be!
The Doctor: No! Definitely not. No.