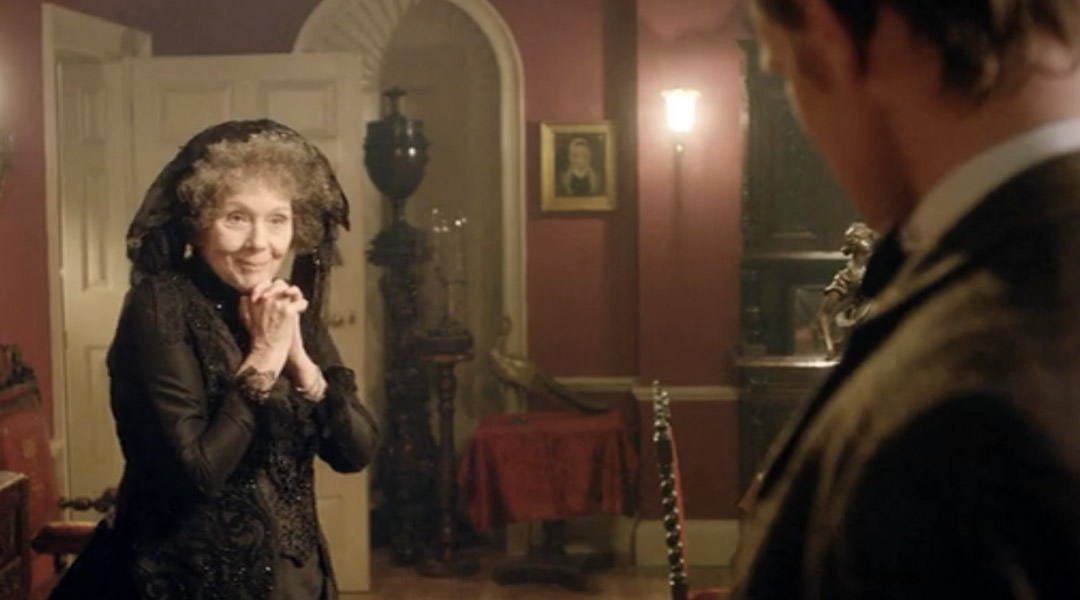 Edmund (Brendan Patricks): If I have not returned in an hour you must fetch the police.
Effie (Olivia Vinall): Edmund!
Edmund: Don’t fret, Evie my dear. All will be well. But we must get to the bottom of this dark and queer business no matter what the cost.

Artie: Well fire. That’s put me right off me mash. Another one.
Mr. Thursday (Brendan Patricks): Another?
Artie: It’s not the first one I’ve had in here looking like that. The Crimson Horror. That’s what they’re calling it.
Mr. Thursday: I have no interest in the deplorable excesses of the penny dreadful.
Artie: Hey hey. Payment in advance, flower. Taking a big risk, I am. They’ll have me vitals for fiddle strings if they knew I’d let you come to look at one of their precious stiffs.
Mr. Thursday: This stiff is my brother. I’ve come up from London to bring him home.

Mr. Thursday: Thank you for agreeing to this meeting. I’m told you are the investigator to see if there are strange goings-on.
Madame Vastra (Neve McIntosh): I read of your brother’s death. Another victim of the Crimson Horror, I believe.
Mr. Thursday: So it is claimed. He was a newspaper man. He and a young woman were working undercover. Tell me, Madame. Do you know what an optogram is?
Madame Vastra: It’s a silly superstition, sir. The belief that the eye can retain an image of the last thing it sees. {he hands her a picture and she pulls back her veil} Good grief.
Mr. Thursday: Oh god! {he faints}

Madame Vastra: According to my research, Sweetville’s proprietor hold recruitment drives for her little community. She’s only interested in the fittest and the most beautiful.
Strax (Dan Starkey): You may rely on me, ma’am.
Madame Vastra: I was in fact speaking to Jenny.
Strax: Jenny. If this weak and fleshy boy is to represent us, I strongly advise the issuing of scissor grenades, limbo vapor and triple-blast brain spitters.
Madame Vastra: What for?
Strax: Just generally. Remember, we are going to the north.

Mrs. Gillyflower: Bradford! That Babylon of the moderns with its crystal light and its glitter. All are swarm with the wretched ruins of humanity. Men and women crushed by the Devil’s juggernaut. Moral turpitude can destroy the most delicate of lives. Believe me, I know. I know! {she pulls a curtain to reveal a young woman} My own daughter. Blinded in a drunken rage by my late husband. Her once beautiful eyes pale and white as mistletoe berries.

Mrs. Gillyflower: And what, my friends, is your story? Will you be found wanting when the end of days is come? When judgment rains down upon us all? Or will you be preserved against the coming apocalypse? Do not despair. I offer a way out. There is a different path. Sweetville!

Strax: It asked permission to enter and then it fell over. What are we to make of it?
Madame Vastra: I imagine Mr. Thursday wants to know what progress we are making. The question is, how did the Doctor’s image come to be preserved on a dead man’s eye. It’s a scientific impossibility.

Madame Vastra: I wonder how Jenny is getting on.
Strax: If she hasn’t made contact by nightfall, I suggest a massive frontal assault on the factory, Madame. Casualties can be kept to perhaps as little as eighty percent.
I think there may be subtler ways of proceeding, Strax.

Abigail (Michelle Tate): You’re not local, are you?
Jenny: No. Up from London.
Abigail: Different here, I’ll bet.
Jenny: Oh yeah. A bleedin’ horse market. Do you know anyone who’s come to live here? In Sweetville, I mean.
Abigail: I had a pal who come here three month back. She wrote to tell me how perfect it all were. Funny though. I’ve not heard a peep from her since.

Jenny: I could open this door. Would you like that? {banging} Thought you might. But you and me have got to come to an arrangement. Savvy? {banging} Now… you stand well back, do you hear me? I don’t mean no ‘arm to ya. But you try anything funny and I’ll lave you here to rot. Is that understood? {banging again so she opens the door to…} Doctor!

Ada: You are all I have, monster. And all will be well. There will be room for us in the New Jerusalem.

The Doctor: Ah! Missed me?!
Jenny: Doctor!
The Doctor: Jenny. Jenny Jenny Jenny Jenny. Just when you think your favorite clock ticking Victorian chambermaid will never turn up, Jenny! {he kisses her and she smacks him} You have no idea how good that feels.

The Doctor: Right. Mrs. Gillyflower, we’ve got to stop her. And then there’s Clara. Poor Clara. Where’s Clara?
Jenny: Clara? Doctor, wait!
The Doctor: Can’t. Clara. Gotta find.
Jenny: What happened to you? How long have you been like that?
The Doctor: Days, weeks? Don’t know. Long story. I’ll keep it short.

The Doctor: Okay! So. Not London 1893. Yorkshire 1893. Near enough.
Clara: You’re making a habit of this, getting us lost.
The Doctor: Sorry. It’s much better than it used to be. Oo… I once spent a hell of a long time trying to get a gobby Australian to Heathrow airport.
Clara: What for?
The Doctor: Search me. Anyway– {a scream in the distance} Braveheart Clara.

Edmund: Same as the rest. All dead from causes unknown. And their flesh… glowing.
Artie: Like something manky in a coal cellar. They keep turning up in canal. The Crimson Horror.
The Doctor: Ooo! Good name. Hey that’s good, isn’t it? “The Crimson Horror.” I wonder what it is.

The Doctor: Do you know the old Romany superstition, Clara? That the eye of a dead person retains an image of the last thing it sees. Nonsense, of course. Unless the chemical composition of the body has been massively corrupted.

The Doctor: Wow, this is nasty! An organic poison. A sort of venom. And you think it’s connected to Sweetville?
Edmund: I do.
The Doctor: Well then. We need a plan.

Mrs. Gillyflower: Like pretty maids, all in a row. The process improves with every attempt. Mr. Sweet is such a clever old thing. Oh! Into the canal with the rejects, Ada.

Strax: Horse! You have failed in your mission. We are lost with no sign of Sweetville. Do you have any final words before your summary execution? The usual story. {he pulls out a gun} Fourth one this week. And I’m not even hungry.

Jenny: Are we talking about the same person? About that Clara? {The Doctor runs into a building without answering} Doctor!
The Doctor: I couldn’t see much from where I was but I think she survived the process. She must be here somewhere.
Jenny: But Clara died! The Ice Lady? Doctor!
The Doctor: It’s… well… ah. It’s complicated.

The Doctor: Oh great. Great. Attack of the super models. Time for a plan.
Jenny: No, Doctor. This one’s on me. {she kicks some ass}
The Doctor: That is a plan. {more advance}. Okay. Time for a new plan. Run!

The Doctor: I know who you think she is but she isn’t. She can’t be.
Madame Vastra: I was right then. You and Clara have unfinished business.

Madame Vastra: My people once ruled this world–as well you know. But we did not rule it alone. Just as humanity fights a daily battle against nature, so did we. And our greatest plague–the most virulent enemy–was the repulsive red leech.
The Doctor: Ooooo! The Repulsive Red Leech. Now on balance I think I prefer The Crimson Horror. What was it exactly?
Madame Vastra: A tiny parasite. It infected our drinking water and once in our systems it secreted a fatal poison.
The Doctor: So it’s been hanging around, lurking in the shadows. Maybe it’s evolved. Maybe it’s had help.

The Doctor: All right, gang. I’ve got a plan.

Ada: You! It’s you! My monster! You’ve come back. But you’re…
The Doctor: Warm. And alive. Thanks to you, Ada. You saved me from your mother’s human rubbish tip. {she cries} Now, hey. What’s wrong?
Ada: She does not want me, Monster. I am not to be chosen. Perhaps it was my own sin. The blackness in my heart that my father saw in me.
The Doctor: Ada, no! That’s nonsense. Stupid, backwards nonsense. And you know it. You know it.

The Doctor: Now Ada, I need you to tell me something. Who is Mr. Sweet? Ada?
Ada: Oh dear monster.
The Doctor: Please.
Ada: I cannot. Even now I cannot, I cannot betray Mama.
The Doctor: Well. Come with us then. There’s something you need to know.

The Doctor: Planning a little fireworks party, are we?
Mrs. Gillyflower: You have forced me to advance the great work somewhat, Doctor. But my colossal scheme remains what it was. My rocket will explode high in the atmosphere, raining down Mr. Sweet’s beneficence onto all humanity.
Clara: And wiping us all out. You can’t!
Mrs. Gillyflower: My new Adam and Eves will sleep for a few months before stepping out into a golden dawn! Is it not beautiful, Doctor?

The Doctor: Hang on! Hang on! I’ve got a sonic screwdriver.
Clara: Yeah? I’ve got a chair.

The Doctor: No no, Clara. If we follow straight after her, she’ll shoot Clara on the spot.
Clara: She wouldn’t.
The Doctor: She would.

The Doctor: Chairs are useful.

Ada: Shoot if you wish, Mama. It is of no matter, for you killed me a long time ago!

Mrs. Gillyflower: Now Mr. Sweet. Now the whole world will taste your lethal kiss.
The Doctor: I don’t think so, Mrs. Gillyflower.
Mrs. Gillyflower: Very well then. If I can’t take the world with me, you will have to do. Die, you freaks! Die!
Strax: Put down your weapon, human female!

Clara: Ugh. What’s it doing?
The Doctor: It might know she’s dying. She’s no longer of any use to it.

Jenny: What will you do with that thing?
The Doctor: Take it back to the Jurassic era maybe. Out of harm’s way. {Ada finds the parasite and clubs it to bits} On the other hand…

The Doctor: Right. Right. London. We were heading for London, weren’t we.
Clara: Was there any particular reason?
The Doctor: No! No, just thought you might… like it.
Clara: Yeah. Maybe had enough of Victorian values for a bit.
The Doctor: You’re the boss.
Clara: Am I?
The Doctor: No. No! Get in.

The Doctor: Now, Ada, I’d love to stay and help clear up the mess, but–
Ada: I know, dear monster, you have things to do.
The Doctor: And what about you?
Ada: Oh, there are many things a bright young lady can do to occupy her time. It’s time I stepped out of the darkness and into the light.
The Doctor: Good luck, Ada. You know I think you will be just…{he kisses her cheek} splendid!

Angie (Eve de Leon Allen): It’s you, isn’t it? It’s from the seventies but it’s definitely you.
Clara: Of course it’s not.
Artie (Kassius Carey Johnson): And that’s you too. From 1983. I found it at school.
Clara: No. That’s just someone who looks like me.
Angie: And that’s someone who looks like your boyfriend.
Artie: Is he an alien?
Angie: Why would he be an alien?
Artie: The chin.
Angie: And the time travel. {she clicks to a picture of Clara in Victorian dress}
Clara: That’s not right.
Angie: You’re in Victorian London.
Clara: No, I was in Victorian Yorkshire.

Angie: How come you didn’t tell us?
Artie: Time travel. That’s so cool!
Angie: Can we have a go?
Clara: Can you have a what?
Artie: We want a shot at the time machine.
Clara: No no no no no. Listen–
Angie: Okay. Or… we’ll have to tell dad that our nanny’s a time traveller.