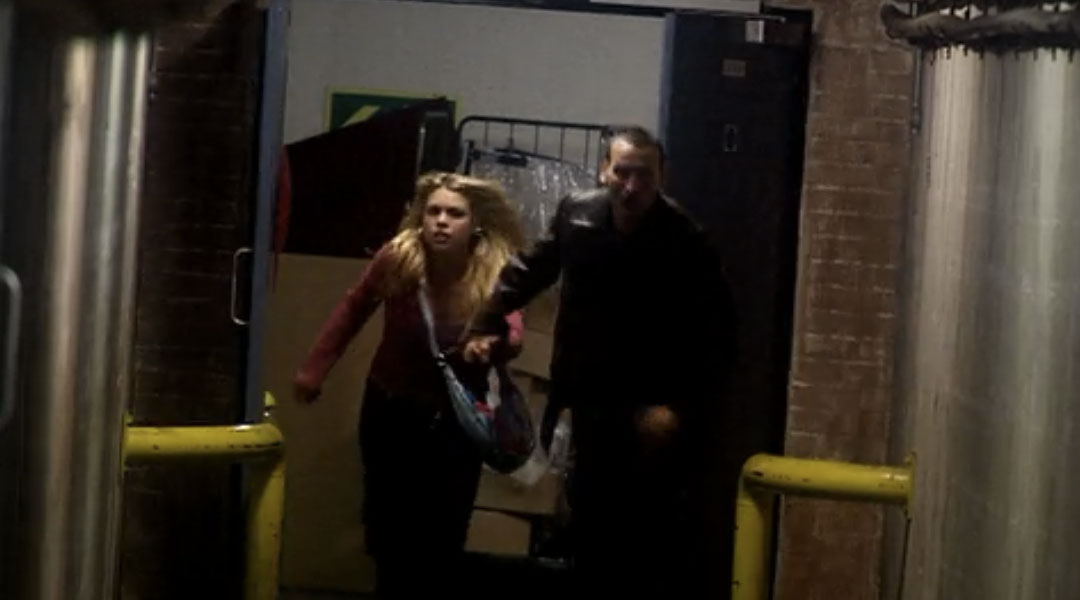 Rose: Who are they?
The Doctor: They’re made of plastic. Living plastic creatures. They’re being controlled by a relay device on the roof. Which would be a great big problem if I didn’t have this. So. I’m going to go upstairs and blow it up. And I might well die in the process. But don’t worry about me, no. You go on. Go on. Go and have your lovely beans on toast. Don’t tell anyone about this ’cause if you do you’ll get them killed. {he shuts the door}.

The Doctor: I’m the Doctor, by the way. What’s your name?
Rose: Rose.
The Doctor: Nice to meet you, Rose. Run for your life!

Jackie Tyler (Camille Coduri): I know! It’s on the telly, it’s everywhere. She’s lucky to be alive. Honestly, it’s aged her. Skin like an old Bible. Walking in now you’d think I was her daughter!

Jackie: I’m not joking about compensation. You’ve had genuine shock and trauma. Arianna got two thousand quid off the Council just ’cause the old man behind the desk said she looked Greek. I know she is Greek, but that’s not the point. She’s very plain.

The Doctor: What are you doing here?
Rose: I live here.
The Doctor: Well what’d you do that for?
Rose: Because I do. I’m only home because someone blew up my job.
The Doctor: Must have got the wrong signal. You’re not plastic are you? {knocks on her forehead}. Nope, bone in.

The Doctor looking at various items in Rose’s apartment: That won’t last. He’s gay and she’s an alien. […] Hm. Sad ending. “Rose Tyler”. […] Well, could have been worse. checking the mirror. Look at me ears.

Rose: You know the old saying, “Give a man a plastic hand…”.

Rose: What have I done wrong? How come those plastic things keep coming after me?
The Doctor: Oh, suddenly the entire world revolves around you! You were just an accident. You got in the way, that’s all.
Rose: It tried to kill me!
The Doctor: It was after me, not you. Last night, in the shop, I was there, you blundered in—almost ruined the whole thing. This morning I was tracking it down, it was tracking me down. The only reason it fixed on you was ’cause you met me.
Rose: So what you’re saying is the entire world revolves around you.
The Doctor: Sort of, yeah.
Rose: You’re full of it!
The Doctor: Sort of, yeah.

Rose: Really though, Doctor. Tell me. Who are you?
The Doctor: Do you know like we were saying? About the Earth revolving? It’s like when you’re a kid. The first time they tell you that the world’s turning and you just can’t quite believe it because everything looks like it’s standing still. I can feel it. {he grabs her hand} The turn of the Earth. The ground beneath our feet is spinning at a thousand miles an hour. And the entire planet is hurtling around the sun at sixty-seven thousand miles an hour and I can feel it. We’re falling through space, you and me. Clinging to the skin of this tiny little world and if we let go… {he drops her hand}. That’s who I am. Now forget me, Rose Tyler. Go home.

Clive (Mark Benton): If you dig deep enough, keep a lively mind, this Doctor keeps cropping up all over the place. Political diaries, conspiracy theories… ghost stories. No first name, no last name, just The Doctor. Always The Doctor. And the title seems to be passed down from father to son. It appears to be an inheritance.

Clive: The Doctor is a legend woven throughout history. When disaster comes, he’s there. He brings a storm in his wake. And his one constant companion.
Rose: Who’s that?
Clive: Death.

Clive: If the Doctor’s back—if you’ve seen him, Rose—then one thing’s for certain. We’re all in danger.

Clive: If he singled you out—if the Doctor’s making house calls—then God help ya.

The Doctor: The assembled hordes of Genghis Khan couldn’t get through that door. And believe me, they’ve tried. Now shut up a minute.

The Doctor: Where’d you want to start?
Rose: Um. The inside’s bigger than the outside?
The Doctor: Yes.
Rose: It’s alien.
The Doctor: Yeah.
Rose: Are you alien?
The Doctor: Yes. Is that all right?
Rose: Yeah.
The Doctor: It’s called the TARDIS, this thing. T-A-R-D-I-S. That’s “Time and Relative Dimension in Space”. {Rose starts crying} That’s okay, culture shock. Happens to the best of us.

Rose: If you are an alien how come you sound like you’re from the North?
The Doctor: Lots of planets have a North.

Rose: Well then, tip in your anti-plastic and let’s go.
The Doctor: I’m not here to kill it. I’m here to give it a chance.

The Doctor: I seek audience with the Nestene Consciousness under peaceful contract. According to Convention Fifteen of the Shadow Proclamation.

The Doctor: Can we keep the domestics outside, thank you?

The Doctor: If I might observe, you infiltrated this civilization by means of warp shunt technology. So may I suggest with the greatest respect that you shunt off. {The Consciousness responds}. Oh don’t give me that! It’s an invasion, plain and simple. Don’t talk about constitutional rights. {The Consciousness reacts badly}. I am talking!

The Doctor to the Consciousness: Yes, that’s my ship. […] That’s not true! I should know, I was there. I fought in the war. It wasn’t my fault! I couldn’t save your world! I couldn’t save any of them!

Mickey: Just leave him! There’s nothing you can do!
Rose: Got no A levels. No job. No future. But I’ll tell you what I have got, Jericho Street Junior School Under 7’s gymnastics team. I got the bronze.

The Doctor: Rose! {he catches her} Now we’re in trouble.

The Doctor: Nestene Consciousness: easy.
Rose: You were useless in there. You’d be dead if it wasn’t for me.
The Doctor: Yes I would. Thank you.

The Doctor: Right then. I’ll be off. Unless, ah, I don’t know, you could come with me. This box isn’t just a London Hoppa, you know. It goes anywhere in the Universe, free of charge.
Mickey: Don’t! He’s an alien! He’s a thing!
The Doctor: He’s not invited.
What d’you think? You could stay here, fill your life with work and food and sleep or you could go… anywhere.
Rose: Is it always this dangerous?
The Doctor: Yeah.
Rose: Yeah, I can’t. I’ve, um, I’ve gotta go and find my mom. And someone’s gotta look after this stupid lump, so…
The Doctor: Okay. See ya ’round. {he leaves in the TARDIS}
Rose: Come on, let’s go. Come on.
The Doctor reappearing moments later: By the way, did I mention it also travels in time?

Rose: Thanks.
Mickey: Thanks for what?
Rose: Exactly.