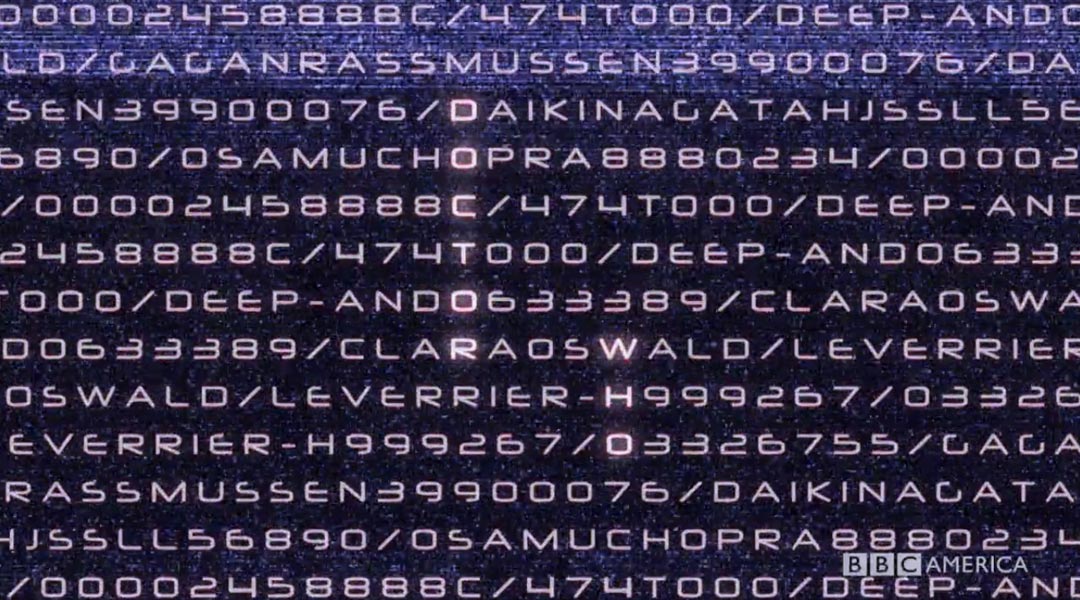 Gagan Rassmussen (Reece Shearsmith): You must not watch this. I’m warning you. You can never unsee it. But if you do watch. Gagan Rassussen. I’m Gagan Rassmussen. This is Le Verrier lab in orbit around Neptune. I’ve put things together into some kind of order so that you can, um, understand. So that you can have some idea. Ah, there are bits missing. Sorry about that. Um, I don’t fully understand what’s been going on here. But, uh… this is what happened.

Rassmussen: They came from Triton. This is Chopra. Bit of an attitude in my opinion.

Nagata (Elaine Tan): Calm down, pet.
Chopra: Well it’s ridiculous. That thing’s meant to be a lethal fighting machine and it just moves around like a lovesick puppy.
Deep-Ando (Paul Courtenay Hyu): I could hear your ranting from inside the pod, Chopra. For the Gods’ sake!

Rassmussen: Commander Nagata. Young for the responsibility. Quite a baptism of fire, I’m afraid.

Rassmussen: Deep-Ando. Conscript. Likes to think of himself as the joker of this little group. Well, he did.

Chopra: Morpheus, Morpheus, Morpheus. Sleep’s the one thing left to us. The one they couldn’t their filthy mitts on. Now they’re even grabbing that. Colonizing it.
Nagata: Spoken like a true Rip.
Chopra: Oh don’t call me that.
Nagata: And don’t call me that, ma’am. Give it a rest, pet.
Chopra: Give what a rest?
Nagata: This is a mission, Chopra. We find out what’s happened on Le Verrier and then we all go home. Keep your politics to yourself, okay?
Deep-Ando: I know someone who’d love to get Chopra back to Triton, eh? Oh ho!

Rassmussen: This one’s obvious from the markings, isn’t it? We all know a Grunt when we see one.

Rassmussen: These are the rescue crew. Don’t get too attached. Everything you’re about to see is from their individual viewpoints, all take from the station itself. The only footage available. They came to find me. This is my station. My lab. I’ve pieced together the rescue as best I could. If you’re going to watch then pay close attention. Your lives may depend on it. There was no crew. No crew left. They did find others though. Strangers.

Nagata: So what happened?
The Doctor: From the beginning of time? That’s a very long story.

The Doctor: What is it?
Clara: I still can’t shake the feeling…
474 (Bethany Black): Eyes. Watch. Eyes in sky.
Chopra: What the hell is that supposed to mean?

Chopra: Send the Grunt.
Nagata: No.
Chopra: Why not? That’s what it’s for. Look, he’s still out there, you can’t just abandon him.
Nagata: I need proper intel before I risk anyone else, including 474.

Clara: Why did it just grab at me?
The Doctor: Semi-sentient. It thinks it knows what’s good for you. You obviously needed 40 winks. Clever little sleep pod. {to Chopra} You said it was something more than that though.
Nagata: Come on. Everyone knows.
The Doctor: Well let’s just say for the sake of argument that we don’t. What is Morpheus?
474: Last pod. This pod. Not empty.

Rassmussen: Ah. This where I come in. Hello. I wanted to get out of there. Immediately. Of course I did, but um… this man, the Doctor. He wanted explanations first. So…

Morpheus Presenter (Zina Badran): May the gods look favorably upon us all. Friends, we live in a time of unparalleled prosperity. A golden age of peace, harmony and industry. But every shift must come to an end. Every working day must stop. Of course we can take stimulants to make that deadline. To keep us propped up through that important meeting. But always, always, sleep claims us in the end. Until now.

Morpheus Presenter: Welcome Morpheus. The Morpheus machine concentrates the whole nocturnal experience into one 5-minute burst. now you can go a whole month without sleep!
Clara: —A month?
Morpheus Presenter: All the chemical benefits of rest, but freeing up the nights to continue working, working, working. To get the edge on your competitor. To turn that extra profit.
Clara: That’s insane. That’s horrible.
Chopra: Finally, someone who sees it for what it is!
Morpheus Presenter: Leave the Rip van Winkles behind, and become one of the new generation of Wide-Awakes! The future is here. The future is now. Let yourself slip into the arms of Morpheus. {she disappears}
The Doctor: But sleep is—
Morpheus Presenter popping back: Terms and conditions apply.

The Doctor: Sleep is vital. Sleep is wonderful. Even I sleep.
Clara: When?
The Doctor: Well when you’re not looking.

The Doctor: What used to be sleep in your eye has turned into a carnivorous life form.

The Doctor: Sleep is essential to every sentient being in the universe. But to humans—greedy, filthy, stupid humans—it’s an inconvenience to be bartered away. Well now we know the truth. Sleep isn’t just a function, it’s blessed. Every night we dive deep into the inky pool, deep into the arms of Morpheus. Every morning we wake up and wipe the sleep from our eyes. And that keeps us safe. Safe from the monsters inside.
Nagata: Well the bloody monsters are outside now.

The Doctor: There’s something going on here. Something we’re not getting.

Clara: What now? We can’t stay in here, we’re gonna freeze to death. We can’t go back out there because the Sandmen will get us.
The Doctor: Sandmen?
Clara: Yeah. It’s a good name. Fits, like the song. {singing} Bum, bum, bum, bum—
The Doctor: No. No no no. You don’t get to name things. I’m the Doctor. I do the naming.
Clara: All right. Sorry.
The Doctor: It’s like the Silurians all over again.

The Doctor: What did you just say?
Nagata: When?
The Doctor: 1.83 minutes ago.
Nagata: I said we don’t have helmet cams.

Rassmussen: Mm. It’s clever, that. Clever strategy. If they’d stayed in there they’d have frozen to death, so the Doctor had to let the creatures in. That was his theory. {beat} Oh, I’m not dead. You probably guessed that by now.

The Doctor: You said you felt like you were being watched, Clara.
Clara: Paranoia, you said.
The Doctor: Not this time. There is a feed. Wireless. These images are being stored by someone. Collated. Nagata, look at this footage. What’s wrong with it? What’s wrong?
Nagata: Don’t know.
The Doctor: Look. There’s one very obvious thing about it. Do you see it yet? No? Okay, I’ll tell you what’s wrong. There’s footage here of everyone. But what’s missing in all of it? What can’t you see anywhere? Not in the footage, no on this ship. Look. Really look. There are no cameras here. No CCTV. No helmet cams. So how and why does this footage even exist? The dust has been watching us.

The Doctor: There’s nothing here from Chopra’s point of view, because he refuses to use Morpheus. But everyone else is here. Including you. You don’t have a camera, Clara. But you will have by now, sleep in your eye.

Chopra: In the absence of any further communication with Chief Nagata and the others, I must regrettably assume them to be deceased. Under the circumstances, I’m now returning to the ship, and will begin preparations to destroy Le Verrier station.

The Doctor: You had that prepared well in advance, didn’t you? Your statement. Your alibi. There would inevitably be questions when you got to Triton. So you needed to get your story straight.
Rassmussen: You can’t fight them, Doctor. There’s no point. They’re the future. A new life form. Better life form. That’s very clear to me now. They’ve made me understand. And we’re to be their food, and that’s only correct. I just needed to find a way to get them off this station, back to Triton. And then they’ll spread. Spread everywhere.
Clara: And that’s what you want? You’re helping them wipe out humanity.
Rassmussen: Things have been made very clear to me!
Nagata: But we saw you die. The Sandmen swallowed you.
The Doctor: I think the professor has been playing a long game. Am I right?
Rassmussen: They speak to me. In my mind. Trust me, I think. But they’re like children. Babies. So new, evolving. Hungry. Always so hungry.

Rassmussen: We had to find a way out. And then there’d be new food sources. Unlimited. So they spared me, and we waited.
The Doctor: You and your cargo.
Rassmussen: I got it in here while you were all distracted.

Rassmussen: I’ve been working on Morpheus for a very long time, Doctor. I had to start somewhere. {indicating the pod} Morpheus’ first client. Patient Zero. The ultimate Wide-Awake. Inside there is a man who hasn’t slept in five years.
The Doctor: Or what’s left of him.
Rassmussen: He’s the wellspring. Once we get to Triton he will spread his spores.

Rassmussen: We can’t fight the inevitable. Humanity’s day is done!

The Doctor: This doesn’t make any sense.
Clara: What?
The Doctor: A man who hasn’t slept for five years.
Clara: Well you heard what he said. That’s the first Morpheus patient.
The Doctor: But the dust consumes the host
Clara: And then they make Sandmen. They conglomerate.
The Doctor: Well we escaped from that cold storage room because they were blind. And why power down the grab-shields when he did? It’s like this is all for effect.
Clara: Look, can we maybe have this conversation when we get off this thing.
The Doctor: Like a story.

The Doctor: It doesn’t make sense! None of this makes any sense!

Rassmussen: Hello again! The thing is, you see, this message, this testament, it wasn’t just my alibi, it was my plan. There are no spores, no infection. The Morpheus process remains the same. An electronic signal that affects the sleep centers of the brain. It changes them. An electronic signal that’s contained in this recording. There it is. Tickles, doesn’t it? I’ve just got time to fit this bit in and then I can finish the story. And then I’m going to transmit this footage to the whole solar system. I do hope you’ve enjoyed the show. I did try to make it exciting. All those scary bits. All those death-defying scrapes. Monsters. And a proper climax with a really big one at the end. Compulsive viewing. I did tell you not to watch. {he reveals a sand interior} There’s nothing left of Rassmussen anymore. Only us. Only us. You will show this film to your family, won’t you? And your friends. And everyone really. And then we can all be together. Dust to dust. Excuse me. You’ve got something there. Just in the corner of your eye.