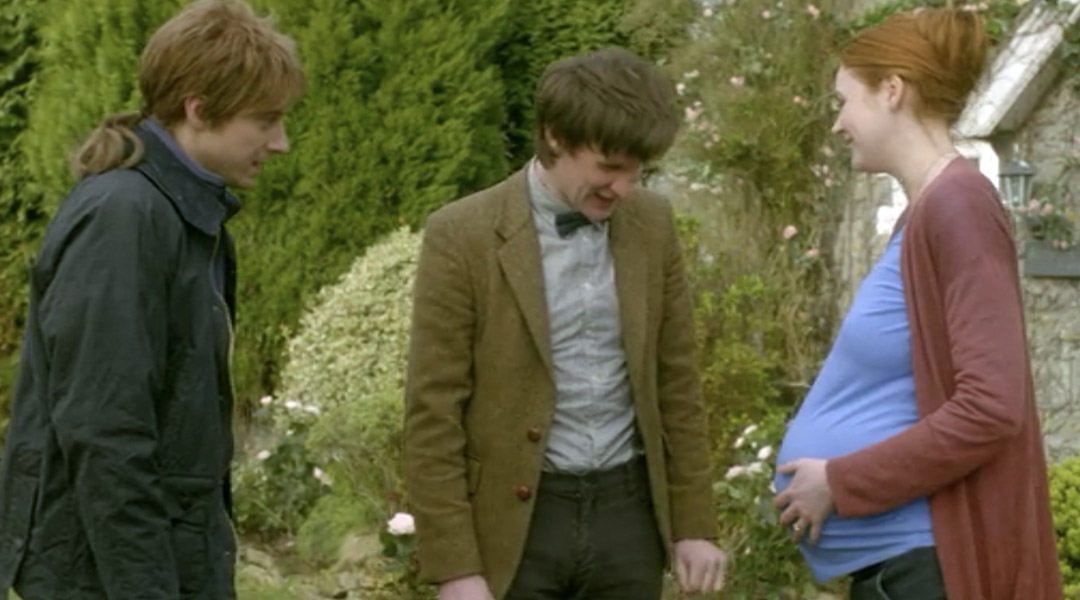 The Doctor: Well I wanted to see how you were. You know me, I don’t just abandon people when they leave the TARDIS. This Time Lord’s for life. You don’t get rid of your old pal the Doctor so easily.
Amy: You came here by mistake, didn’t you.
The Doctor: Yeah. Bit of a mistake. But look, what a result. Look at this. Bench. What a nice bench. What will they think of next. So… what do you do around here to stave off the, you know, self-harm?
Amy: Boredom?
Rory: We relax. We live. We listen to the birds.
Amy: Yeah, see! Birds.

The Doctor: Are you okay? Oh thank god! I had a terrible nightmare about you two. That was scary. Don’t ask. You don’t want to know. Safe now. That’s what counts. Blimey. Never dropped off like that before. Well. Never really. I’m getting on a bit you see. Don’t let the cool gear fool you. Now. What’s wrong with the console. Red flashing lights. I bet they mean something.
Rory: Uh. Doctor, I also had a kind of… dream thing.
Amy: Yeah, so did I.
Rory: Not a nightmare though. Just, um, we were married.
Amy: Yeah. In a little village.
Rory: Yeah, sweet little village. And you were pregnant.
Amy: Yes, I was huge. I was a boat.
Rory: So you had the same dream then? Exactly the same dream?
Amy: Are you calling me a boat?
Rory: And Doctor you were visiting.
Amy: Yeah! Yeah, you came to our cottage.
Rory: How can we have had exactly the same dream. It doesn’t make any sense.
Amy: And you had a nightmare about us. What happened to us in the nightmare?
The Doctor: It was a bit similar in some aspects.
Rory: Which aspects?
The Doctor: Well, all of them.
Amy: You had the same dream.
The Doctor: Basically.
Rory: You said it was a nightmare.
The Doctor: Did I say nightmare? No. More of a really good… mare.

Rory: Doctor, what is going on?
Amy: Is this because of you? Is this some Time Lord-y thing because you’ve shown up again?
The Doctor: Listen to me. Trust nothing. From now on trust nothing you see, hear or feel.
Rory: But we’re awake now.
The Doctor: Yeah, you thought you were awake in the TARDIS too.
Amy: But we’re home.
The Doctor: Yeah you’re home, you’re also dreaming. Trouble is, Rory, Amy, which is which? Are we flashing forwards or… backwards. Hold on tight. This is going to be a tricky one.

The Doctor: Oh this is bad! I don’t like this! {kicks the console}. Never use force! You just embarrass yourself. Unless you’re cross. In which case, always use force!
Amy: Shall I run and get the manual?
The Doctor: I threw it in a supernova.
Amy: You threw the manual in a supernova? Why?
The Doctor: Because I disagreed with it! Stop talking to me when I’m cross.

The Doctor: Look around you. Examine everything. Look for all the details that don’t ring true.
Rory: Okay, well we’re in a spaceship that’s bigger on the inside than the outside.
Amy: With a bowtie-wearing idiot.
Rory: So maybe “what rings true” isn’t so simple.
The Doctor: Valid point.

The Doctor: It’s dead. We’re in a dead time machine.

The Doctor: You said everyone here lives to their 90s. That’s the one thing that doesn’t make sense. Let’s go poke it with a stick. {He runs off and Rory follows}.
Amy: Can we not do the running thing?

The Doctor: Someone—something—is overriding my controls!
Dream Lord (Toby Jones): Well that took a while. Honestly, I’d heard such good things. Last of the Time Lords. The Oncoming Storm. Him in the bowtie.
The Doctor: How did you get into my TARDIS? What are you?
Dream Lord: What should we call me? Well. If you’re the Time Lord let’s call me the Dream Lord.
The Doctor: Nice look.
Dream Lord: This? Yeah, I’m not convinced. Bowties?

Dream Lord (Toby Jones): Oh Amy. You have to sort your men out. Choose, even.
Amy: I have chosen. Of course, I’ve chosen. It’s you, stupid!
Rory: Oh! Good. Thanks.
Dream Lord: You can’t fool me. I’ve seen your dreams. Some of them twice, Amy. Blimey. I’d blush if I had a blood supply. Or a real face.

The Doctor: Where did you pick up this bad cabaret act?
Dream Lord: Me? Oh, you’re on shaky ground.
The Doctor: Am I?
Dream Lord: If you have any more tawdry quirks you open up have a tawdry quirk shop. The madcap vehicle. The cockamamie hair. The clothes designed by a first-year fashion student. I’m surprised you haven’t got a little purple space dog. Just to ram home what an intergalactic wag you are.

Dream Lord: So here’s your challenge: two worlds. Here, in the time machine. And there, in the village that time forgot. One is real, the other’s… fake. And just to make it more interesting. You’re going to face—in both worlds—a deadly danger. But only one of the danger’s is real. Tweet tweet. Time to sleep. {the birds start} Oh. Or are you waking up.

Dream Lord: Oh this is bad. This is very very bad. You’re brain is see-through.

Dream Lord: Ask me what happens if you die in reality.
Rory: What happens?
Dream Lord: You die, stupid. That’s why it’s called reality.

The Doctor: Now. We all know there’s an elephant in the room.
Amy: I have to be this size, I’m having a baby.
The Doctor: No. No. The hormones seem real, but no. Is anyone going to mention Rory’s ponytail. You hold him down, I’ll cut it off?
Rory: This from a man in a bowtie.
The Doctor: Bowties are cool.

Rory: Okay. I don’t like him.
Amy: Who is he?
The Doctor: Don’t know. It’s a big universe.
Amy: Why is he doing this?
The Doctor: Maybe because he has no physical form. That gets you down after awhile. So he’s taking it out on folk like us who can touch, eat, feel.

Rory: I want the other life. I mean we were happy and settled and… about have a baby.
Amy: But don’t you wonder, if that life is real, then why did we give up all this? Why would anyone.
Rory: Because we’re going to freeze to death.

The Doctor: I was promised amazing worlds. Instead I get daft central heating and a… weird kitchen-y wind up device.
Rory: It’s a generator. Get winding.

Amy: So this one must be the dream. There’s no such thing as a cold star. Stars burn.
The Doctor: So this one is just burning cold!
Rory: Is that possible?
The Doctor: I can’t know everything! Why does everybody expect me to always…
Rory: Okay, so this is something you haven’t seen before. So does that mean this is the dream?
The Doctor: I don’t know! But there it is. And I’d say we’ve got about fourteen minutes until we crash into it. But that’s not the problem.
Rory: Because you know how to get us out of this?
The Doctor: Because we’ll have frozen to death by then.

Dream Lord: There was an old Doctor from Gallifrey/Who ended up throwing his life away / He let down his friends and— {birds} Oh no. We’ve run out of time.

Amy: Doctor, what are you doing? What are those piles of dust?
The Doctor: Playtime’s definitely over.

The Doctor: Drop it! Drop all that. I know who you are.
Dream Lord: Of course you don’t.
The Doctor: Of course I do. I’ve no idea how you can be here, but there’s only one person in the Universe that hates me as much as you do.

Amy: Okay, which world do you think is real?
The Doctor: This world.
Rory: No! The other one!
The Doctor: Yeah, but are we disagreeing or competing?
Amy: Competing? Over what?

Amy: My boys. My Poncho Boys. If we’re going to die, let’s die looking like a Peruvian folk band.

Dream Lord: Poor Amy. He always leaves you, doesn’t he? Alone in the dark. Never apologizes.
Amy: He doesn’t have to.
Dream Lord: That’s good. Because he never will. And now he’s left you with me. Spooky old not-to-be-trusted me. Anything could happen.
Amy: Who are you and what do you want? The Doctor knows you, but he’s not telling me who you are. And he always does. Takes him awhile sometimes but he tells me. So you’re something different.
Dream Lord: Oh, is that who you think you are? The one he trusts?
Amy: Actually, yes.
Dream Lord: The only girl in the Universe to whom the Doctor tells everything.
Amy: Yes.
Dream Lord: So what’s his name?

Dream Lord: PIck a world and this nightmare will all be over. They’ll listen to you. It’s you they’re waiting for. Amy’s men. Amy’s choice.

Dream Lord: It’s make-your-mind-up time. In both worlds.
The Doctor: Fine. I need to find my friends.
Dream Lord: “Friends”. Is that the right word for the people you acquire? Friends are people you stay in touch with. Your friends never see you again one they’ve grown up. The old man prefers the company of the young, does he not?

Amy: How did I get up here?
Rory: I carried you. I’m afraid you may experience some bruising.

Amy: I think the baby’s starting.
Rory: Honestly?
Amy: Would I make it up at a time like this?!
Rory: Well you do have a history of… {she eyes him} being very lovely.

Amy: Save him. You save everyone. You always do. That’s what you do.
The Doctor: Not always. I’m sorry.
Amy: Then what is the point of you?

The Doctor: You’re very sure? This could be the real world.
Amy: It can’t. Rory isn’t here. I didn’t know. I honestly didn’t until right now. I just want him.
The Doctor: Okay.

Amy: I love Rory and I never told him. And now he’s gone.

Dream Lord: So. You chose this world. Well done. You got it right. And with only seconds left. Fair’s fair. Let’s warm you up. I hope you’ve enjoyed your little fictions. They all came out of your imagination so, ah, I’ll leave you to ponder on that. I have been defeated. I shall withdraw. Farewell.

Rory: So that was the Dream Lord then. Those little specks.
The Doctor: No. No. No! Sorry, wasn’t it obvious? The Dream Lord was me. Psychic pollen. It’s a mind parasite. It feeds on everything dark in you. Gives it a voice, turns it against you. I’m nine-hundred-and-seven. Had a lot to go on.
Amy: But why didn’t it feed on us, too?
The Doctor: The darkness in you pair, it would have starved to death in an instant. I choose my friends with great care. Otherwise I’m stuck here with my own company and you know how that works now.
Amy: But those things he said about you. You don’t think any of that’s true?