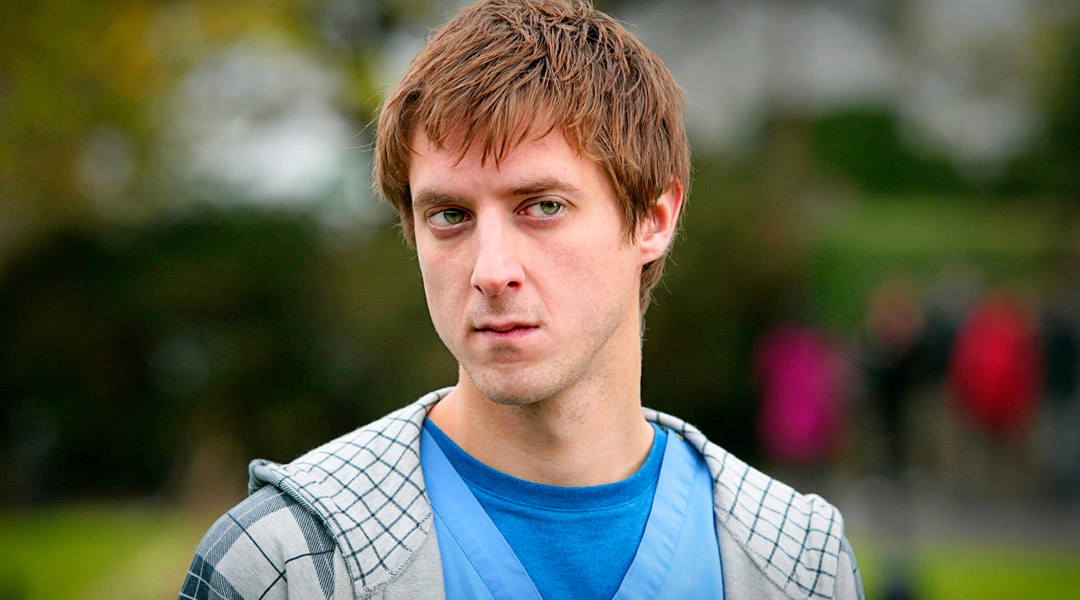 Dr. Ramstead: So. They all called out at once. That’s what you’re saying. All of them. All the coma patients. You do understand that these people are all comatose, don’t you? They can’t speak.
Rory Williams: Yes, Dr. Ramstead.
Dr. Ramstead: Then why are you wasting my time?
Rory: Because they called for you.

The Doctor: Well that’s rubbish. Who’s that supposed to be?
Rory: It’s you.

The Doctor: Me? Is that what I look like?
Rory: You don’t know?
The Doctor: Busy day.

Rory Williams: What are you doing?
The Doctor: Tracking the signal back—sorry, in advance.
Rory Williams: About what?
The Doctor: The bill. Oy! I didn’t say you could go. Article 57 of the Shadow Proclamation. This is a fully-established level five planet. And you were going to burn it. What? Did you think no one was watching. You lot. Back here. Now. Okay. Now I’ve done it.
Rory Williams: Did he just bring them back? Did he just save the world from aliens and then bring all the aliens back again?

Rory leaving a message: Hey! It’s me. Hello! How are you? Um, the reason for this call is because I haven’t told you for seven hours that I love you, which is a scandal! An even if we weren’t getting married tomorrow I’d ask you to marry me anyway. Yes I would! Because you are smashing.

The Doctor: The life out there, it dazzles. I mean, it blinds you to the things that are important. I’ve seen it devour relationships entirely. {the TARDIS sparks} It’s meant to do that. Because for one person to have seen all that, to have tasted the glory, and then go back. It will tear you apart. So! I’m sending you somewhere. Together.
Amy: What, like a date?
The Doctor: Anywhere you want. Any time you want. One condition: it has to be amazing. The Moulin Rouge in 1890. The first Olympic games. Think of it as a wedding present because frankly, it’s either this or tokens. It’s a lot to take in, isn’t it? Tiny box, huge room inside. “What’s that about?” Let me explain—
Rory: It’s another dimension.
The Doctor: It’s basically another dimension— What?
Rory: After what happened with Prisoner Zero I’ve been reading up all on the latest scientific theories. FTL travel, parallel universes.
The Doctor: I like the bit when someone says “It’s bigger on the inside.” I always look forward to that.
Amy: So this date. I’m kinda done with running down corridors. What d’ya think, Rory?

The Doctor: Ah, you’re going to love Venice. So many people did. Byron, Napoleon, Cassanova. That reminds me. 1580. That’s alright. Cassanova doesn’t get born for 145 years. Don’t want to run into him. I owe him a chicken.
Rory: You owe Cassanova a chicken?
The Doctor: Long story. We had a bet.

Rory: And what have you been doing?
Amy: Well… running. And fighting. I’ve been scared. More scared than I thought—
Rory: Did you miss me?
Amy: I… I knew I’d be coming back.
Rory: He was right. It blots out everything else.
Amy: Rory, it’s our date. Let’s not do this.

Rory: This whole thing is mental! They’re vampires, for Gods sake.
The Doctor: No.
Amy: So if they’re not vampires…
The Doctor: It makes you wonder what could be so bad it doesn’t actually mind us thinking it’s a vampire.

Rory: What’s with you and Amy? You said she kissed you.
The Doctor: Now? You want to do this NOW?
Rory: I have a right to know. I’m getting married in 430 years.

Rory: I can’t see a thing. Just as well. I brought this then. {whips out a keychain flashlight.}
The Doctor pulls out a light wand: Ultraviolet. Portable sunlight.
Rory: Yours is bigger than mine.
The Doctor: Let’s not go there.

Rory: This way, you freak! No, you… big stupid great Spongebob…

The Doctor: Rory, listen to that,
Rory: Uh, what? All I can hear is… silence.

The Doctor: Are you okay? Oh thank god! I had a terrible nightmare about you two. That was scary. Don’t ask. You don’t want to know. Safe now. That’s what counts. Blimey. Never dropped off like that before. Well. Never really. I’m getting on a bit you see. Don’t let the cool gear fool you. Now. What’s wrong with the console. Red flashing lights. I bet they mean something.
Rory: Uh. Doctor, I also had a kind of… dream thing.
Amy: Yeah, so did I.
Rory: Not a nightmare though. Just, um, we were married.
Amy: Yeah. In a little village.
Rory: Yeah, sweet little village. And you were pregnant.
Amy: Yes, I was huge. I was a boat.
Rory: So you had the same dream then? Exactly the same dream?
Amy: Are you calling me a boat?
Rory: And Doctor you were visiting.
Amy: Yeah! Yeah, you came to our cottage.
Rory: How can we have had exactly the same dream. It doesn’t make any sense.
Amy: And you had a nightmare about us. What happened to us in the nightmare?
The Doctor: It was a bit similar in some aspects.
Rory: Which aspects?
The Doctor: Well, all of them.
Amy: You had the same dream.
The Doctor: Basically.
Rory: You said it was a nightmare.
The Doctor: Did I say nightmare? No. More of a really good… mare.

Rory: Doctor, what is going on?
Amy: Is this because of you? Is this some Time Lord-y thing because you’ve shown up again?
The Doctor: Listen to me. Trust nothing. From now on trust nothing you see, hear or feel.
Rory: But we’re awake now.
The Doctor: Yeah, you thought you were awake in the TARDIS too.
Amy: But we’re home.
The Doctor: Yeah you’re home, you’re also dreaming. Trouble is, Rory, Amy, which is which? Are we flashing forwards or… backwards. Hold on tight. This is going to be a tricky one.

The Doctor: Look around you. Examine everything. Look for all the details that don’t ring true.
Rory: Okay, well we’re in a spaceship that’s bigger on the inside than the outside.
Amy: With a bowtie-wearing idiot.
Rory: So maybe “what rings true” isn’t so simple.
The Doctor: Valid point.

Dream Lord: Ask me what happens if you die in reality.
Rory: What happens?
Dream Lord: You die, stupid. That’s why it’s called reality.

The Doctor: Now. We all know there’s an elephant in the room.
Amy: I have to be this size, I’m having a baby.
The Doctor: No. No. The hormones seem real, but no. Is anyone going to mention Rory’s ponytail. You hold him down, I’ll cut it off?
Rory: This from a man in a bowtie.
The Doctor: Bowties are cool.

Rory: I want the other life. I mean we were happy and settled and… about have a baby.
Amy: But don’t you wonder, if that life is real, then why did we give up all this? Why would anyone.
Rory: Because we’re going to freeze to death.

Rory: I was promised amazing worlds. Instead I get daft central heating and a… weird kitchen-y wind up device.
The Doctor: It’s a generator. Get winding.

Rory: Okay, so this is something you haven’t seen before. So does that mean this is the dream?
The Doctor: I don’t know! But there it is. And I’d say we’ve got about fourteen minutes until we crash into it. But that’s not the problem.
Rory: Because you know how to get us out of this?
The Doctor: Because we’ll have frozen to death by then.

Amy: How did I get up here?
Rory: I carried you. I’m afraid you may experience some bruising.

Amy: I think the baby’s starting.
Rory: Honestly?
Amy: Would I make it up at a time like this?!
Rory: Well you do have a history of… {she eyes him} being very lovely.