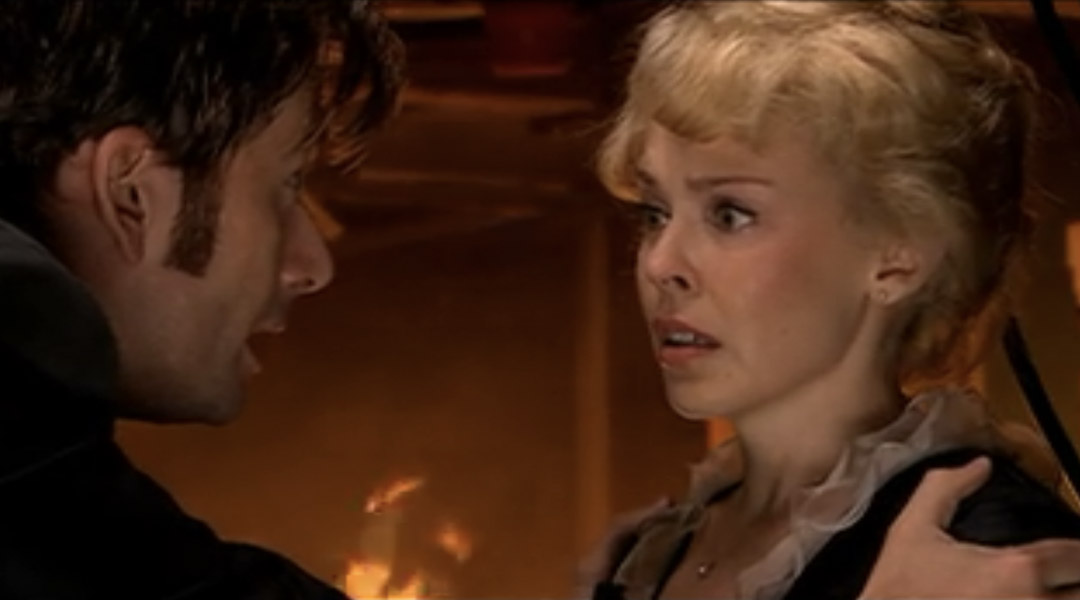 Overhead: Attention all passengers. The Titanic is now in orbit above Sol Three. Also known as Earth. Population: Human. Ladies and gentlemen, welcome to Christmas.

Captain Hardaker (Geoffrey Palmer): Now then, gentlemen. According to the traditions of the planet below, Christmas is a time of celebration. I think you might be entitled to a tot of rum. Just the one. Off you go.

Crew Member: One woman, she asked the Host to fix her necklace, it almost broke her neck. In first class!

The Doctor: You dreamt of another sky. New sun, new air, new life. A whole universe teeming with life. Why stand still when there’s all that life out there.
Astrid Peth (Kylie Minogue): So you travel alone?
The Doctor: All the time. Just for fun. Well. That’s the plan. Never quite works.
Astrid: Must be rich though.
The Doctor: Haven’t got a penny. Stowaway.
Astrid: Kidding?
The Doctor: Seriously!
Astrid: No!
The Doctor: Oh yeah.
Astrid: How’d you get on board?
The Doctor: Accident. I’ve this sort of ship thing I was just rebuilding her. Left the defenses down. Bumped into the Titanic, here I am. Bit of a party I thought, Why not.

Foon (Debbie Chazen): Have a buffalo wing. They must be enormous, these buffalo. So many wings!

Mr. Copper (Clive Swift): I am Mr. Copper, the ship’s historian. And I shall be taking you to Old Londontown in the country of UK. Ruled over by Good King Wenceslaus. Now human beings worshipped the great god Santa, a creature with fearsome claws, and his wife Mary. And every Christmas Eve, people of UK go to war with the country of Turkey. They then eat the Turkey people for Christmas dinner. Like savages!
The Doctor: Excuse me. Sorry, sorry. But where did you get this from?
Mr. Cooper: I have a first class degree in Earthnomics.

The Doctor: But um, hold on. Hold on. What was your name?
Bannakaffalatta (Jimmy Vee): Bannakaffalatta.
The Doctor: Okay, Bannakaffalatta. But it’s Christmas Eve down there. Late night shopping, tons of people. He’s like a talking Conker. No offense, but you’ll cause a riot. ‘Cause the streets are going to be packed with shoppers and parties and people and— beams down to an empty street. Oh.

Rickston Slade (Gray O’Brien): You there, has anyone checked the external shielding?
Heavenly Host: Information: You are all going to die.

The Doctor: Bad name for a ship. Either that, or this suit is really unlucky.

Astrid: What happened? How come the shields were down?
The Doctor: I don’t think it was an accident.
Astrid seeing bodies floating in open space: How many dead?
The Doctor: We’re alive. Just focus on that.

The Doctor: First things first. One. We are going to climb through this ship. B. (No.) Two. We are going to reach the bridge. Three. Or C. We are going to save the Titanic. And, coming in a very low four. Or D. Or that little iv in brackets they use in footnotes. Why? Right then, follow me.

Slade: Hang on a minute! Who out you in charge? And who the hell are you anyway?
The Doctor: I’m the Doctor. I’m a Time Lord. I’m from the planet Gallifrey in the constellation of Kasterborous. I’m nine hundred and three years old. And I’m the man that’s going to save your lives and all six billion people on the planet below. You got a problem with that?
Slade: No.
The Doctor: In that case, allons-y!

Mr. Copper: Rather ironic, but this is very much in the spirit of Christmas. It’s a festival of violence. They say that human beings only survive depending on whether they’ve been good or bad. It’s barbaric!
The Doctor: Actually, that’s not true. Christmas is a time of peace and thanksgiving and— what am I going on about? My Christmasses are always like this.

Astrid: So you look good for nine hundred and three.
The Doctor: You should see me in the mornings.
Astrid: Okay.

The Doctor: Mr. Copper, this degree in Earthnomics, where’s it from?
Mr. Copper: Honestly?
The Doctor: Just between us.
Mr. Copper: Mrs. Golightly’s Happy Travelling University and Drycleaners.

Slade: Is that the only way across?
The Doctor: On the other hand it is a way across.

Bannakaffalatta: Too many people!
The Doctor: Oy! Don’t get spiky with me. Keep going!

Foon: You’re coming with me. she jumps off the ledge, taking the host with her.
The Doctor: No more.

Astrid: Sounds like you do this thing all the time.
The Doctor: Well, not by choice. All I am is a traveller.

The Doctor: Wait wait wait! Security Protocol One! D’you hear me? One! One! Okay, that gives me three questions. Three questions to save my life. Am I right?
Heavenly Host: Information: Correct.
The Doctor: No, that wasn’t one of them. I didn’t mean it. That’s not fair. Can I start again?
Heavenly Host: Information: No.
The Doctor: No. No no no! That wasn’t a question either. Blimey. One question left. One question left. So. You’ve been given orders to kill the survivors. But! Survivors must therefore be passengers or staff. But not me. I’m not a passenger, I’m not staff. Go on, scan me. No such bio records. No such person on board. I don’t exist. Therefore you can’t kill me. Therefore I’m a stowaway. And stowaways should be arrested and taken to the nearest figure of authority. And I reckon the nearest figure of authority is on Deck 31. Final question: Am I right?
Heavenly Host: Information: Correct.
The Doctor: Brilliant. Take me to your leader. I’ve always wanted to say that.

The Doctor: Well. Now. That’s what you’d call a fixer-upper. Come on then, Host with the most. This ultimate authority of yours. Who is it?

The Doctor: I don’t understand. What’s the Earth got to do with it?
Max Capricorn: This interview is terminated!

Max Capricorn: My own board voted me out. Stabbed me in the back!
The Doctor: If you had a back.

The Doctor: So that’s the plan? A retirement plan? Two thousand people on this ship. Six billion underneath us. All of them slaughtered. And why? Because Max Capricorn is a loser.
Max Capricorn: I never lose.
The Doctor: You can’t even sink the Titanic.

Newsreader (Jason Mohammad): And as dawn rises over Great Britain, it seems that this year, the city of London has escaped alien intervention. The Queen has remained in residence, in defiance of extraterrestrial attack.

The Doctor: Unsinkable, that’s me.
Alonzo: We made it.
The Doctor: Not all of us.

Mr. Copper about Astrid: There’s not enough left. The system is too badly damaged. She’s just atoms, Doctor. An echo with a ghost of consciousness. She’s stardust.

Mr. Copper: Of all the people to survive, he’s not the one you would have chosen is he? But if you could choose, Doctor, if you could decide who lives and who dies… that would make you a monster.

Mr. Copper: You know, between you and me, I don’t even think this snow is real. I think it’s the ballast from the Titanic’s salvage entering the atmosphere.
The Doctor: Yeah. One of days it might snow for real.