I reedited my Saturday. I’m not good at spontaneous thoughts.

Random ancestry story: When I was little I was researching my family ancestry (basically I called up both of my grandmas and asked some questions). One of my grandmothers told me two stories about my relatives. One was a long-dead princess who lived in Germany. And one was a soldier in the German army during WWII, who was plotting against Hitler and was discovered. He was given the choice of jumping out of a plane sans parachute or meeting with Hitler. He jumped.

I always questioned the story because how someone in our family would know what actually happened to him, this random soldier? So I tried looking him up today.

Turns out it’s true. Sort of.

He was a field commander (at one point commanding the entire German army in France. And he was indeed in on a plot to kill Hitler. And when the plot failed he committed suicide (but not by jumping out of a plane).

But he had a long history of going back and forth between being courted by Hitler and being courted by the people who wanted to kill Hitler. Bribery was involved. I won’t post a link to his Wikipedia page, but suffice it to say he was not a good guy. To put it midly.

Anyway, finding this out just made me think back to my grandma telling me this story—of how he fought bravely against the Nazis and was a hero. I wonder if she knew the truth and chose not to tell a little girl (likely) and/or if, in her mind, she believed he really was a hero (by believing the alternate narrative).

So many times it’s easier to believe a lie than to admit the truth.

Another random ancestry story: My cabin is in rural northern Wisconsin. During Prohibition it was a bar. They brewed potato beer and whiskey in the cellar and had dribble glasses at the bar for newcomers. They even had a sandwich (The Hilltop) that was an open-faced sandwich my dad still makes.

Around the same time, Al Capone and his gang hung out in nearby Cornucopia, Wisconsin. When things were too hot for them in Chicago they’d head to Corny. The distance and bad snow in winter made it difficult for the police to find them. Plus the town could keep a secret. And were used to big black cars and guys with Tommy guns. In appreciation, Capone actually funded the building of the boys club there.

Since there weren’t a lot of speakeasies in these small towns, naturally Capone came to know about my family and their operation. And took a shine to my grandfather. One day when Capone needed a ride home to Chicago he asked my grandfather (who was working in Chicago at the time) to drive. I’ve seen the remnants of the bar (I have shot glasses and there are a ton of bottles and caps up there). 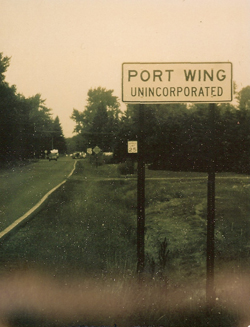 On my mom’s side, interesting story as well. My grandfather was in WWII and worked counterintelligence in England. I think he was in the United States Armed Air Forces. He had albums and albums of flak photos of the war that I used to love to pore through. And everyone was stamped with a “Do not remove under penalty of death” (I’m paraphrasing). I even have a cloth map that parachutists would fold up and stick in their gear before they jumped. I feel like I should do something with it, but I don’t think framing it would be the best plan.

There was a Simpsons quote in the episode tonight: All in all, it’s been a weird, weird lottery. —The End.

Interesting quote. I think I may devote a moment or two tomorrow to see if I can track it down. It’s definitely from a short story. Maybe The Lottery. Which would, you know, make sense.