So, as you may or may not know, in honor of my impending birthday, I am dedicating this rant to all things random. Today’s installment:

The day started like any other: it sucked. But 2:00 in the afternoon found me throwing horseshoes over and over again so our photographer could get an in-air shot of the horseshoe for the cookbook. So you, dear reader, get to see a random shot of my hand: 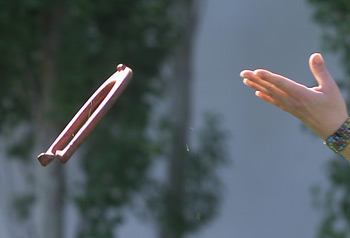 Then at 4:00, I was on my way to assist with a photo shoot of an Italian family picnic under a tree. We had a huge table and everything. And it was HEAVY.

The shot was supposed to look like the family had just eaten and it was around sunset. And the client wanted olives in the shot. We HAD to have olives. Mounds and mounds of olives. All sizes and shapes and color. Imperative there be olives!

So for half an hour, I was running around this huge table, munching on olives, placing olives, trying to make the dishes and flatware look used, and trying to make it look like a real family picnic. I even put some lipstick prints on a few of the glasses. That’s right, I got some skills.

Then the model family showed up. They weren’t actually a family, but they was supposed to Grandma, Grandpa, Mom, Dad, Brother, and Sister.

And because our photographer had to stand back aways away to take the shots, I had to direct the models.

Do you know how weird that is? It’s weird.

And they weren’t good at taking direction. We had initially told them they needed to be smiley and move around a lot. Like a, you know, family.

But they were pretty stiff, so I was yelling out cheesy shit like, “You’re supposed to be Italian! Gesture wildly!” or “Big smiles! Bigger smiles!” or “Pick up your glass! Take a sip! Emote!”

The grandparents and the mom apparently knew each other, so they were able to chit chat and make it a little more natural, but they kept talking about people who had died or some personal tragedies in their lives. So half the time, they were frowning or crying. I was going insane.

I can’t imagine doing this for a living. It’s too weird.