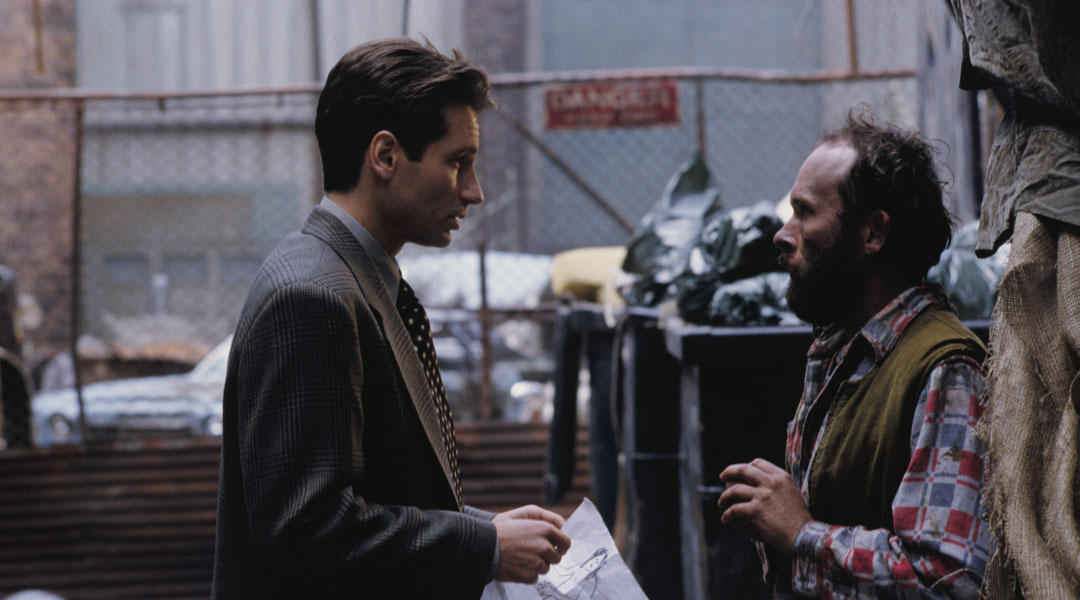 Scully: Working hard, Mulder?
Mulder about the centerfold: This woman claims to have been taken aboard a spaceship and held in an anti-gravity chamber without food and water for three days.
Scully: Anti-gravity is right.

Scully: They found a body in the New Jersey woods yesterday. Missing its right arm and shoulder. They had been eaten off. By a human.
Mulder: Where in New Jersey?
Scully: Just outside Atlantic City.
Mulder: Not an uncommon place to lose a body part.

Mulder: The fact is, we’ve got a cannibalized body in New Jersey. Someone or something out there is hungry.

Scully: Well it’s not hard to see why they mistook you for a vagrant.
Mulder: You gonna rag on me or you gonna take me to get me something to eat?
Scully: Am I buying or did you manage to panhandle some spare change while you were at it.

Rob: So can I ask about the case you’re on or can’t you say?
Scully: I don’t think it’s a case we should discuss over dinner.
Rob: I don’t suppose you’d want to hear about the finer points of estate planning and taxation.

Scully: Mulder, we’ve put men into space. We’ve built computers that work faster than the human mind.
Mulder: While we over-populate the world and create new technologies to kill each other with? Maybe we’re just beasts with big brains.

Scully: Mulder, will you do me a favor? Will you just go out and have a beer? Will you take the day off? I’ll cover for you, you just take some time for yourself.

Mulder: Don’t you have a life, Scully?
Scully: Keep it up, Mulder, and I’ll hurt you like that beast woman.
Mulder: Eight million years out of Africa.
Scully: Look who’s holding the door.