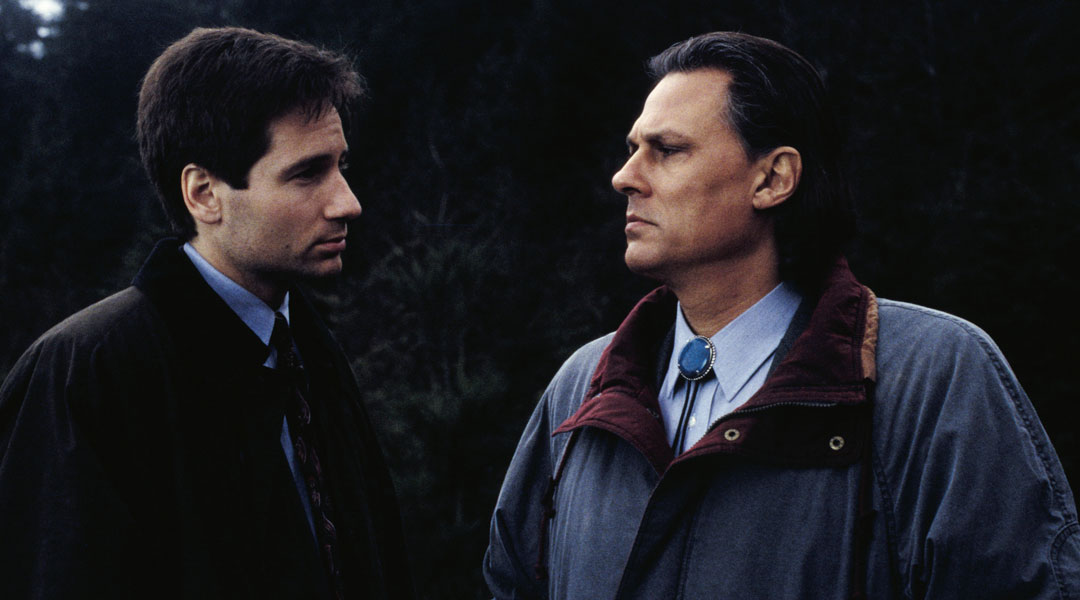 Ish (Jimmy Herman): Go home, FBI.
Mulder: How’d you know?
Ish: I could smell you a mile away.
Mulder: Well they told me that even though my deodorant’s made for a woman it’s strong enough for a man.
Ish: I was at Wounded Knee in 1973. Know what I learned fighting the FBI? They don’t believe in us, and we don’t believe in them.
Mulder: I want to believe.

Ish: Why are you here? What are you looking for?
Mulder: I think you already know what we’re looking for.
Ish: Don’t tell me what I know.

Mulder: Who are they?
Sheriff Charlie Tskany (Michael Horse): Guardians of the dead. They escort the deceased spirits to the new world. I only let them as far as the front door. Anybody that knows me, knows I keep the ancient beliefs out there and the police work in here.
Mulder: The woman in the pool hall said that people were afraid of some Indian legend. What do they believe happened in the Parker case?
Sheriff Tskany: Look, I’m not a park ranger here to answer all your questions about Indians.

Scully: Mulder, since we’ve been here you’ve acted as if you’ve expected to find every piece of evidence that we’ve come across. What aren’t you telling me? Why are we here?
Mulder: A true piece of history, Scully. The very first X-File. Initiated by J. Edgar Hoover himself in 1946.

Ish: You even have an Indian name. “Fox.” You should be Running Fox. Or Stinky Fox.
Mulder: Just as long as it’s not Spooky Fox.

Ish: FBI. See you in about… eight years.
Mulder: I hope not.