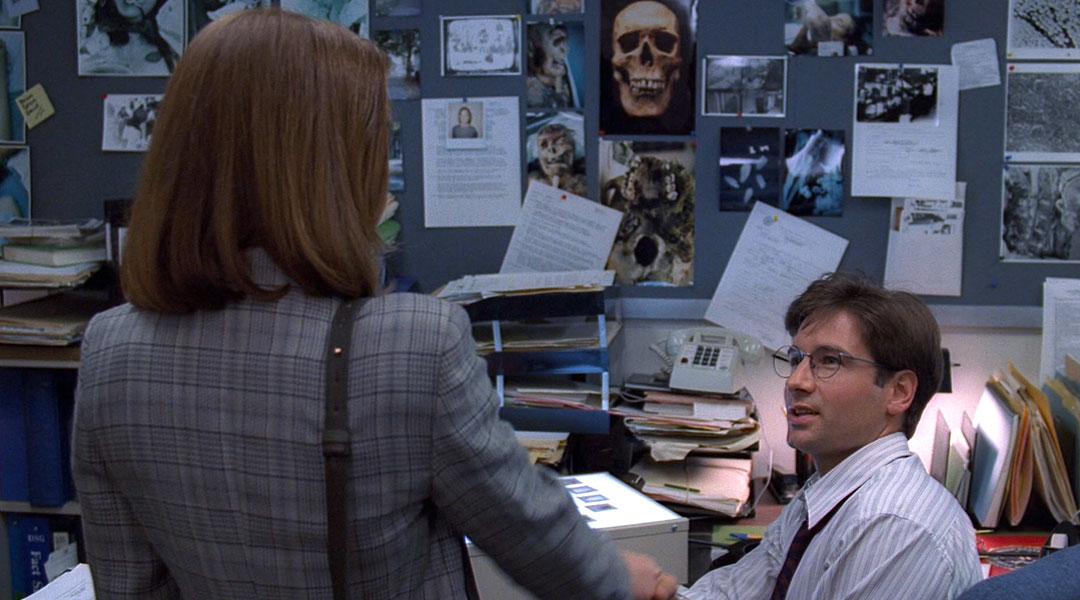 Detective Miles (Leon Russom) identifying a body: Karen Smithson.
Coroner Truitt (Stephen E. Miller): Is that a positive ID?
Detective Miles: She went to school with my son.
Officer: Would that be the class of ’89, Detective. It’s happening again, isn’t it?

Director: Agent Scully, thank you for coming on such short notice. Sit down. I see you’ve been with us just over two years.
Agent Dana Scully (Gillian Anderson): Yes sir.
Director: You went to medical school but you chose not to practice. How’d you come to work for the FBI?
Scully: Well sir, I was recruited out of medical school. Um, my parents still think of it as an act of rebellion, but I saw it as a place where I could distinguish myself.
Man: Are you familiar with an agent named Fox Mulder?
Scully: Yes, I am.
Man: How so?
Scully: By reputation. He’s an Oxford-educated psychologist, who wrote a monograph on serial killers and the occult that helped catch Monty Props in 1988. Generally thought of as the best analyst in the violent crimes section. He had a nickname at the academy. Spooky Mulder.
What I’ll also tell you is that Agent Mulder has developed a consuming devotion to an unassigned project outside the bureau mainstream. Are you familiar with the so-called X-Files?
Scully: I believe they have to do with unexplained phenomena.
Director: More or less. The reason you’re here, Agent Scully, is we want you to assist Agent Mulder on these X-Files. You will write field reports on your activities along with your observations on the validity of the work.
Scully: Am I to understand that you want me to de-bunk the X-Files project, sir?
Director: Agent Scully, we trust you’ll make the proper scientific analysis. You’ll want to contact Agent Mulder shortly. We look forward to seeing your reports.

Scully introducing herself: Agent Mulder. I’m Dana Scully. I’ve been assigned to work with you.
Agent Fox Mulder (David Duchovny): Well isn’t it nice to be suddenly so highly regarded. So who did you tick off to get stuck with this detail, Scully?
Scully: Actually I’m looking forward to working with you. I’ve heard a lot about you.
Mulder: Oh really? I was under the impression that you were sent to spy on me.
Scully: If you have any doubt about my qualifications or credentials I—
Mulder: You’re a medical doctor. You teach at the Academy. You did your undergraduate degree in Physics. “Einstein’s Twin Paradox: A New Interpretation. Dana Scully, Senior Thesis.” Now that’s a credential—rewriting Einstein.
Scully: Did you bother to read it?
Mulder: I did. I liked it. It’s just that in most of my work the laws of Physics rarely seem to apply.

Mulder: Do you believe in the existence of extraterrestrials?
Scully: Logically, I would have to say no. Given the distances needed to travel from the far reaches of space, the energy requirements would exceed a spacecraft’s capabilities that—
Mulder: Conventional wisdom. You know this Oregon female. She’s the fourth person in her graduating class to die under mysterious circumstances. Now when convention and science offer us no answers, might we not finally turn to the fantastic as a plausibility?
Scully: The girl obviously died of something. If it was natural causes it’s plausible that there was something missed in the post-mortem. If she was murdered it’s plausible there was a sloppy investigation. What I find fantastic is that there are any answers beyond the realm of science. The answers are there. You just have to know where to look.
Mulder: That’s why they put the “I” in FBI. I’ll see you tomorrow morning, Scully. Bright and early. We leave for the very plausible state of Oregon at 8am.

Scully: How did you know the girl was going to have the marks?
Mulder: I don’t know, lucky guess?
Scully: Dammit, Mulder, cut the crap. What is going on here? What do you know about those marks? What are they?
Mulder: Why, so you can put it down in your little report? I don’t think you’re ready for what I think.
Scully: I’m here to solve this case, Mulder. I want the truth.
Mulder: The truth? I think those kids have been abducted.
Scully: By who?
Mulder: By what.

Mulder: I was twelve when it happened. My sister was eight. She just disappeared out of her bed one night. Just gone. Vanished. No note, no phone calls, no evidence of anything.
Scully: You never found her?
Mulder: Tore the family apart. No one would talk about it. There were no facts to confront, nothing… to offer any hope.
Scully: What did you do?
Mulder: Eventually I went off to school in England. I came back, got recruited by the Bureau. Seems I had a natural aptitude for applying behavioral models to criminal cases. My success allowed me a certain freedom to pursue my own interests. That’s when I came across the X-Files.
Scully: By accident?
Mulder: At first it looked like a garbage dump for UFO sightings, alien abduction reports—the kind of stuff that most people laugh at as being ridiculous. But I was fascinated. I read all the cases I could get my hands on. Hundreds of them. I read everything I could about paranormal phenomena, about the occult…
Scully: What?
Mulder: There’s classified government information I’ve been trying to access but someone has been blocking my attempts to get at it.
Scully: Who? I don’t understand.
Mulder: Someone at a higher level of power. The only reason I’ve been allowed to continue with my work is because I’ve made connections in Congress.
Scully: And they’re afraid of what? That you’ll leak this information?
Mulder: You’re a part of that agenda. You know that.
Scully: I’m not a part of any agenda. You’ve got to trust me. I’m here just like you to solve this.
Mulder: I’m telling you this, Scully, because you need to know—because of what you’ve seen. In my research I’ve worked very closely with a man named Heitz Werber, and he’s taken me through deep regression hypnosis. I’ve been able to look into my own repressed memories to the night my sister disappeared. I can recall a bright light outside and a presence in the room. I was paralyzed. Unable to respond to my sister’s calls for help. Listen to me, Scully, this thing exists.
Scully: But how do you—
Mulder: The government knows about it. And I gotta know what they’re protecting. Nothing else matters to me. And this is as close as I’ve ever gotten to it.

Mulder: You gotta love this place. Every day is like Halloween.

Mulder: Why would they destroy evidence? What would they want with that corpse?
Scully: I don’t know.
Mulder: Makes you wonder what’s in those other two graves.

Director: Agent Mulder. What are his thoughts?
Scully: Agent Mulder believes we are not alone.
Director: Thank you, Agent Scully. That will be all.