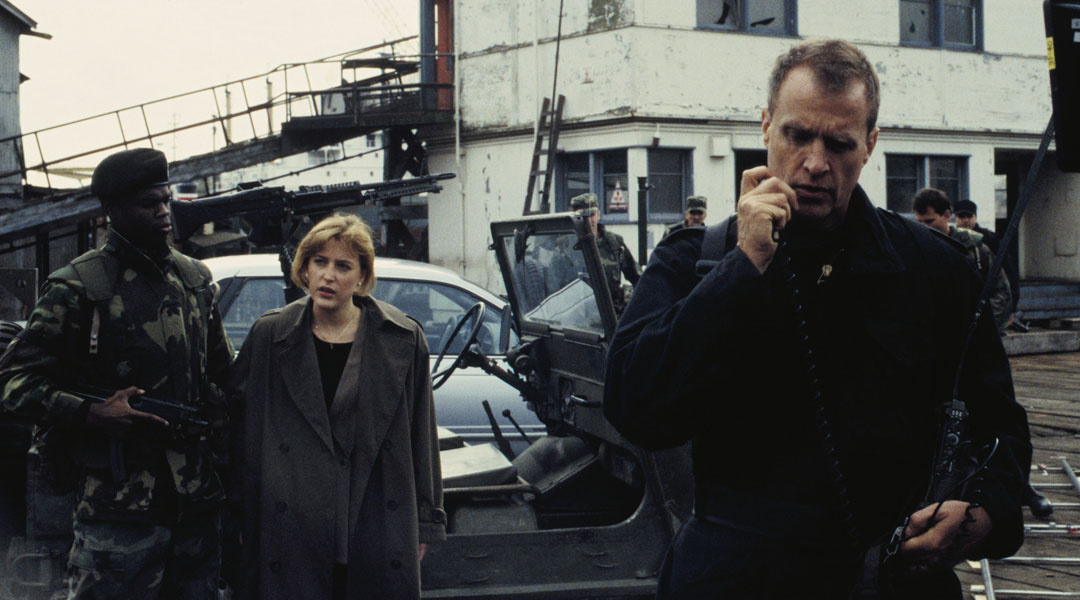 Mulder: Then what happened out there if it wasn’t a train wreck?
Deep Throat (Jerry Hardin): Mulder, the continental United States is surrounded by an electronic fence that reaches fifteen thousand miles into space. We use it to track and monitor the seven thousand and eighty-seven man-made objects that orbit the earth. Last night at 2317, that fence was breached. This morning at 0100 Operation Falcon went into effect.

Deep Throat: I’d say you have twenty-four hours before the entire area is sanitized. After that, it’ll be like nothing ever happened.

Commander Calvin Henderson (Marshall Bell): You just made the worst mistake of your life, Agent Mulder.
Mulder: I think you knocked out a filling.

Mulder: I didn’t order room service.
Scully: This isn’t funny, Mulder.
Mulder: You meet Max?
Scully: Who?
Mulder: Max from NICAP. They must have released him. Another intrepid soul in search of a close encounter.
Scully: Is that what this is about?
Mulder: What else?
Scully: Try explaining that to Section Chief McGrath. He stepped over Blevins ordering a full inquiry with a recommendation… Mulder, he wants to shut down the X-Files and he want you out of the Bureau.
Mulder: What else is new.

Max Fenig (Scott Bellis): So this must be the enigmatic Doctor Scully.

Scully: You’re entitled to the truth.
Mrs. Wright: I can’t afford the truth!

Lt. Fraser: 2418? Isn’t that where— ?
Karen Koretz: Same exact spot, sir. Though I am reading a much larger craft this time.
Fraser: Meteor, Miss Koretz.
Koretz: A much larger meteor, sir.

Fraser: Where is it?
Koretz: Well sir, the “meteor” seems to be hovering over a small town in eastern Wisconsin.

Mulder: You hear that noise, Scully? Hammer and nails. They’re building a gallows in the town square. Don’t worry. It was only a matter of time. I’m surprised I lasted this long.
Scully: Good luck.
Mulder: I’ll break a leg.

Mulder: How can I disprove lies that are stamped with an official seal.
McGrath: That will be all, Mr. Mulder.
Mulder: You can deny all the things I’ve seen, all the things that I’ve discovered. But not for much longer. ‘Cause too many others know what’s happening out there. And no one—no government agency—has jurisdiction over the truth.

McGrath: The committee’s case was airtight. You’ve ruined the last, best chance we had to get rid of him.
Deep Throat: I appreciate your frustration, but you and I both know that Mulder’s work—his… singular passion—poses a most unique dilemma. But his occasional insubordination is in the end far less dangerous.
McGrath: With respect, sir, less dangerous than what?
Deep Throat: Than having him expose to the wrong people what he knows. laughs. What he thinks he knows. Always keep your friends close, Mr. McGrath. But keep your enemies closer.