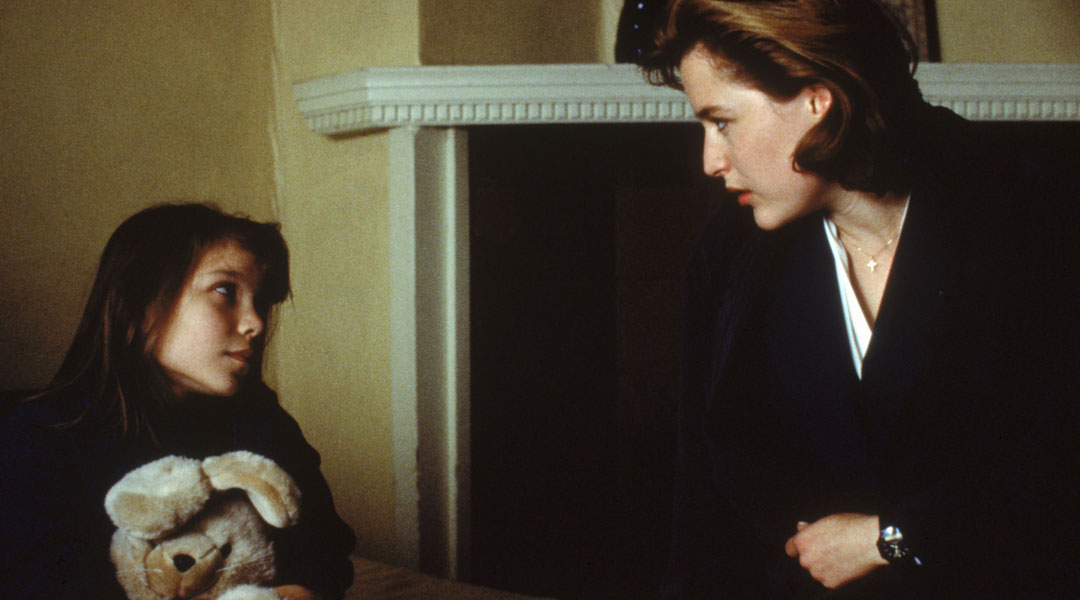 Scully: Death by hypervolemia. Seventy-five percent blood loss. That’s over four liters of blood.
Mulder: You could say the man was running on empty.

Scully: Mulder, why would alien beings travel light years to Earth in order to play “doctor” on cattle?
Mulder: For the same reason we cut up frogs and monkeys. Besides, they seem to have stepped up their interest.

Tina: The men from the clouds, they were after my dad.
Mulder: Why were these men after your dad?
Tina: They wanted to exsanguinate him.

Scully: So you still believe this is UFO-related? Cindy Reardon didn’t see red lightning.
Mulder: I don’t know. The only thing similar about these girls does seem to be their appearance.
Scully: Well there is the random possibility that two people can have an unrelated likeness.
Mulder: Who both just happened to see their fathers exsanguinated? I’d like to get the odds on that in Vegas.

Scully: The girls are the one and only link between two murders.
Mulder: And one girl was just abducted.
Scully: Kidnapped.
Mulder: Potato, potat-ah-to.

Dr. Katz (George Touliatos): We have reason to believe that Dr. Kendrick was tampering with genetic material of fertilized ova in the lab prior to implant. Experimenting with eugenics.
Scully: Did you report this to the AMA?
Dr. Katz: Of course. And I fired her. I also requested an investigation from the US Health Department.
Scully: And what happened?
Dr. Katz: The AMA censured her. My request for an investigation was denied. Dr. Kendrick disappeared.

Deep Throat: Are you certain she hasn’t followed you?
Mulder: Yes. What are you doing here?
Deep Throat (Jerry Hardin): I thought we might take in a Warriors game. Actually, I was just in the neighborhood and wondered if I had ever told you about the Litchfield experiments.
Mulder: Hm. No, you haven’t.
Deep Throat: Well. It was a most interesting project. Highest level of classification, all records have since been destroyed. And those who knew of it will deny knowledge of its existence. In the early fifties, during the height of the Cold War, we got wind the Russians were fooling around with eugenics—rather primitively, I might add. Trying to cross-breed their top scientists, athletes, [you name it/anything]. To come up with the superior soldier. And naturally, we jumped on the bandwagon.
Mulder: The Litchfield Experiment.
Deep Throat: Mm hm. A group of genetically-controlled children were raised and monitored on a compound in Litchfield. The boys were called Adam and the girls were called Eve.

Scully: Why the flashlights?
Guard: She screams and screams if we turn the overheads on. No one’s ever got a really good look at her.

Eve 6 (Harriet Harris): Unlock the chains, and then we’ll talk.
Mulder: They’re probably there for a good reason.

Scully: Are you Sally Kendrick?
Eve 6: That’s not my name. But… she is me and I am her and… we are all together.

Dr. Sally Kendrick (Harriet Harris): I had hoped my work at the Stapes Center had corrected the Litchfield flaws. Psychotic behavior didn’t develop in the Adams and Eves until age sixteen. Homicidal behavior at twenty. Imagine my… disappointment when I learned of your accelerated development. How did you learn of each other’s existence.
Eve 9: We just knew.
Dr. Kendrick: Did you discuss how you’d orchestrate your little prank?
Eve 10: We just knew.

Mulder: Forget your sodas?
Eve 9: We didn’t do anything wrong.
Eve 10: We’re just little girls.
Mulder: That’s the last thing you are.

Eve 6: Hello girls. So nice to have company.