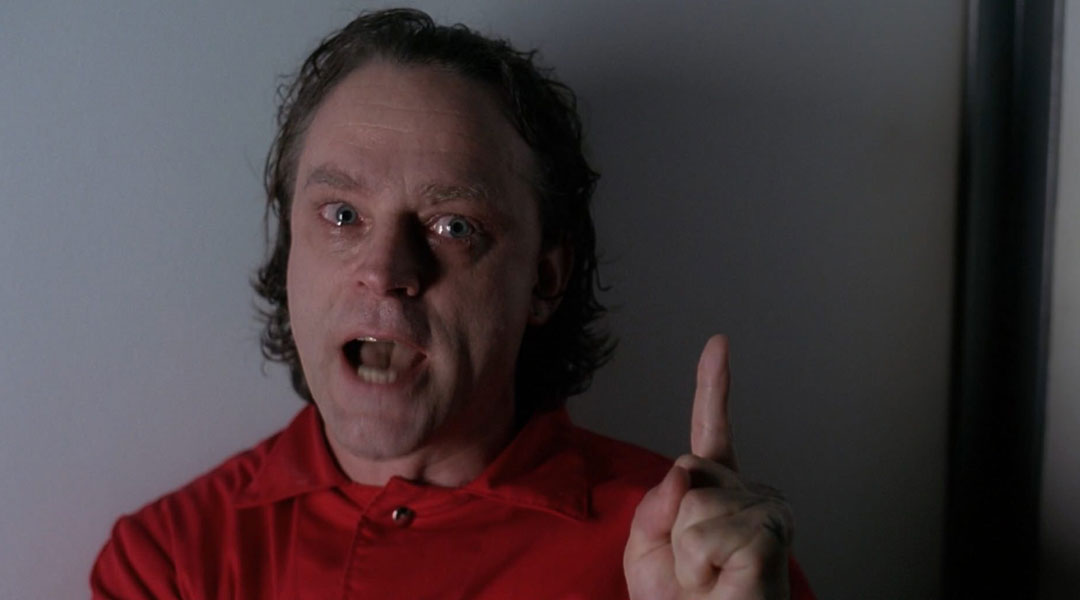 William Scully (Don S. Davis): Are you going to leave this up all year?
Scully: Yep, all year. Since you always made us take the Christmas tree down the day after Christmas I’m making up for lost time.
William Scully: If your idea of a good time is to pick up dried pine needles, treat yourself.
Maggie Scully: As if he’s an authority on having a good time.

Scully: Dad? I thought you guys left. Where’s mom? {the phone rings} Hello?
Maggie Scully: Dana?
Scully: Mom? What’s the matter?
Maggie Scully: We, um… we lost your dad. He had a massive coronary about an hour ago. He’s gone.

Scully: Last time you were that engrossed it turned out you were reading the Adult Video News.

Mulder: At the age of six, Luther Boggs slaughtered every pet animal in his housing project. When he was thirty he strangled five family members over Thanksgiving dinner and then sat down to watch the fourth quarter of the Detroit-Green Bay game. Some killers are products of society, some act out past abuses. Boggs kills because he likes it.

Scully: I know that you and Dad were… disappointed that I chose the path I’m on instead of medicine. But I need to know. Was he at all proud of me?
Maggie Scully: He was your father.

Luther Lee Boggs: Mr. Boggs must be made redemptive for his transgressions.
Mulder: That’s exactly what the state of North Carolina intends to do next week.

Scully: Did Boggs confess?
Mulder: No. No, it was five hours of Boggs’ channeling. After three hours I asked him to summon up the soul of Jimi Hendrix and requested “All Along the Watchtower.” You know guy’s been dead twenty years, but he still hasn’t lost his edge.

Mulder: Dana, open yourself up to extreme possibilities, but only when they’re the truth. That goes for Boggs and your father.

Scully: You set us up. You’re in on this with Lucas Henry. This was a trap for Mulder because he helped put you away. Well I came here to tell you, that if he dies because of what you’ve done, four days from now nobody will stop me from being the one that’ll throw the switch and gas you out of this life for good, you son of a bitch!

Luther Lee Boggs: I know what you want. And I know who you want to talk to. Why don’t you just go ahead and ask me.
Scully: I’ll believe you, if you let me talk to him.
Luther Lee Boggs: Starbuck. {he wrestles with himself} No no no! Nobody talks to anybody until I get a deal. Don’t underestimate my fear of dying and don’t downplay my terror of going back to that chair. I know my Hell’s going to be to go on back to that chair over and over again for all of time, but in this life—my one and only life—I don’t ever want to go back again! Ever! Last time I went to Death’s Door I looked inside. I ain’t never talked to a minister before in my life. Ever. Until that day. And he said, “He who doth not love, remains in death. And he who hates his brother is a murderer, and no murderer has eternal life abiding in him.” My family, who I killed after their last meal, was right there to watch me over mine. And their fear and their horror that I made them feel when I killed them was injected into me and their collective fear alone was just one taste of Hell.

Luther Lee Boggs: This cold dark place, Scully, Mulder’s lookin’ in on it right now.
Scully: It may be a cold, dark place for you. But it’s not for Mulder. And it’s not for my father.

Scully: Luther, if you really were psychic—
Luther Lee Boggs: I’d have known you lied. That there never was a deal. I know you tried. {she starts to leave} Scully, avoid the Devil. Don’t follow Henry to the Devil. Leave that to me.

Scully: I’m afraid. I’m afraid to believe.
Mulder: You couldn’t face that fear? Even if it meant never knowing what your father wanted to tell you?
Scully: But I do know.
Mulder: How?
Scully: He was my father.