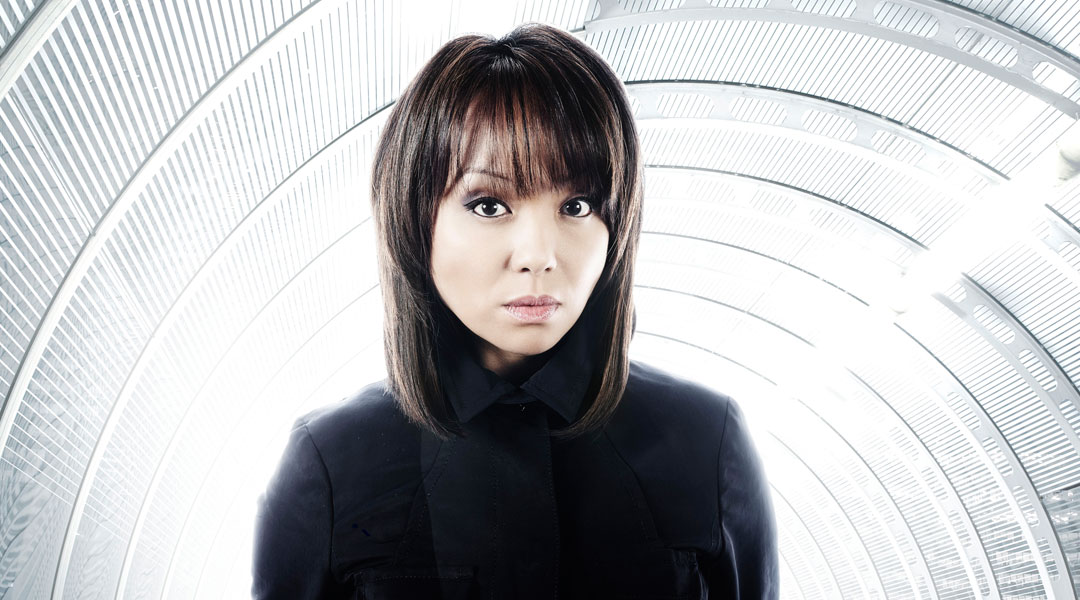 Owen: What are we gonna do when we catch it?
Tosh: Jack would know.
Owen: Yeah, well Jack’s not here, is he? Jack’s disappeared. Fat lot of good Jack is.

Jack about Beth: What did she do? Is it a virus, a lockdown?
Tosh: No, she’s just turned off the lights.
Jack: What is it with her and lightbulbs?

Jack: Tosh, you switched off the tranceiver?
Tosh: Yes.
Jack: Are you sure?
Tosh: Well I was until you asked.

Tosh: Come on guys, that wasn’t even difficult. A disappointment.
Ianto: It’s almost obscene what you do to security systems.

To the Last Man

Tosh: You’re the only one who can stop this. If you don’t it’s the end of everything!

Tommy: Seems like there’s always a war somewhere.
Tosh: It’s not exactly a war.
Tommy: Looks like one.

Tosh: Does Tommy know what happens to him?
Jack: No.
Tosh: If he asks then what do I say?

Tosh: Maybe the answer is to go out with someone who knows what you do.
Owen: Look around you, Tosh. Only we know what we do.

Tosh: You write about artifacts in your diary?
Ianto: Among other things.

Gwen: Jack what have you got? Jack holds up the glove Oh my god.
Tosh: You can’t use that. Not after Suzie.
Gwen: I’m using the glove. I’m bringing Owen back.

Jack: Okay Team, say your goodbyes. Gwen? Gwen is at a loss.
Owen: Gwen, no offense but I’ve only got two minutes to live.
Jack: Tosh?
Tosh: Owen, I’m going to miss you. And I love you. Always have.
Jack: Owen, I need the code for the alien morgue. You’re the only one that knows it.
Owen: You brought me back for that? For that?!?!

Tosh: Owen! What I said before, when I thought you were dead—
Owen: I’m not dying, I’m dead. I’m a headless chicken I just haven’t stopped running about yet.
Tosh: Well, when I told you I—
Owen: Yeah. You didn’t mean it. I know.
Tosh: You do?
Owen: Yes. I mean, you didn’t say anything before and then suddenly I’m dying and it’s like, “I love you”. That’s not love, Tosh. That’s grief. You’re losing something so suddenly you desperately desire it. Textbook response.

Tosh: Are we seriously going to act on something she “Googled”?

Banana: Alright, love? You’ve got a big box. Do you want a hand with that?
Tosh: No thank you, I’m fine.
Banana: You going to the wedding?
Tosh: I’m a friend of Gwen’s.
Banana: I’m Banana. S’pose you can tell why.
Tosh: You come up in spots and go soft quickly?
Banana: Actually I’m the best man.
Tosh: Evolution is full of surprises.

From Out of the Rain

Tosh: So what are we saying? That two people from a piece of film have decided to go AWOL?

Tosh: We’ve always believed that things can only come through the Rift one way. What if we’re wrong? What if the Rift doesn’t just leave stuff behind? Wht if it also takes?
Gwen: Who else have you told about this?
Tosh: No one. I called you as soon as I realized.

Tosh: Oh my god? There are really this many?
Gwen: Now we tell Jack.

Tosh: You’ve got what you want. Now let her go.
Woman: Except now you’re the victim of your own success. Perfectly situated. Proven ability. You can give us so much more.
Tosh: And what if I refuse?
Woman: Then your mother stays with us. And your brilliance is used against her.

Intercom: This is a UNIT facility.. Your rights as a citizen have been withdrawn. You will be held here indefinitely. We are not required to provide you with legal representation. Anything you say will be recorded. You will be allowed no communication with any person or organization outside this facility. There is no right of appeal. If you fail to comply with the rules we are authorized to discipline you.
Tosh: Is my mother safe?
Intercom: We can not provide you with that information.

Tosh: Who are you?
Jack: Nobody. I don’t exist. And for a man of my charisma that’s quite an achievement.

Jack: You made this, right?
Tosh: I just followed the plans.
Jack: The plans don’t work.
Tosh: What?
Jack: The technical plans you followed, they were wrong. They had mistakes in them. That’s why the plans were shelved. But you, Toshiko sato, you automatically fixed things as you went along. What I’m trying to say is, “Aw, baby! You’re good.”

Random Scythe Guys: Devils! Blasphemers! Pray to your heathen God. While in the Lord’s name we cast you out. They advance and Ianto and Tosh shoot.
Ianto: There we are then.
Tosh: Sorted.

Gwen: Tosh, do we have the scale of the damage on the city?
Tosh: Fifteen major explosions at strategic points across the city. There’s currently a surge in traffic trying to leave the city, but the explosions have cut off all major routes in and out. Landlines, mobile phones, and IT networks all dow. TV and radio off air. He’s completely crippled us, Gwen.
Ianto: Don’t want to be the harbinger of doom but the systems which serve the Turnmill nuclear plant have all gone offline.

Tosh: We need to restore the terminal servers.
Ianto: What if we can’t?
Tosh: Then the reactor goes into meltdown.
Ianto: Then I’m going up there.
Tosh: Ianto—
Ianto: Look, if we can’t fix the remote servers then there must be something I can do onsite to prevent the nuclear meltdown.
Tosh: That would be suicide.
Ianto: Are we going to discuss it or are we going to do it?
Tosh: Okay, but we both go.

Owen: Tosh? Come on, girl! Here we go. Right, you’ve done it, Tosh. You’ve got power. You okay?
Tosh: Yeah. I’m fine.
Owen: Right, what’s going on there?
Tosh: Just a… machine malfunction.
Owen: You hurt?
Tosh: Who me? No. I’m fine. It’s just my arm.
Owen: Okay.
Tosh: I’m sorting out another painkiller.
Owen: Good.
Tosh: Okay.
Owen: Come on, let’s do this thing.
Tosh: Right. Oh god. Owen.
Owen: What’s the matter?
Tosh: There’s no way to stop the meltdown. It’s too far gone.
Owen: Okay okay, that is not good, is it? But come on, Tosh. There’s got to be something. There’s always something. Come on!
Tosh: The only option now is to vent the flow channels internally.
Owen: Vent them where?
Tosh: The area you’re in. There’s a containment building.
Owen: Yeah.
Tosh: You need to set up a time delay program, channel the fuel into that bunker, and instigate permanent lock down. Seal the building and the meltdown will be contained within. Obviously, remember to get out.
Owen: Yeah, I think I can remember that bit.
Tosh: I’ll open the system protocol. You just need to enter the timeframe and authorize it, okay.
Owen: Okay, Tosh. Let’s do this thing. And ah, Tosh? Thank you.
Tosh: That’s what I’m here for.

Owen: Yes! Rock and roll!
Tosh: Oh. Owen, get out of there! There’s a power surge in the system. When that hits, it’ll trigger an emergency lock down!
Owen: No! No! Tosh! Toshiko I can’t get out! Not like this. Not like this! I’m not going yet! Get me out of here, Tosh! Get me out of here! I’ve died once, I’m not doing it again! Where’s Jack? Where’s Gwen, Ianto, John? You want to watch the dead man die again?
Tosh: Owen, just stay calm.
Owen: Oh Why should I do that? Where’s the fun in that? I’m gonna rage my way to oblivion. Screams
Tosh: Please stop.
Owen: Why? Give me one good bloody reason why, Tosh. One good reason why I shouldn’t keep screaming.
Tosh sobbing: Because you’re breaking my heart.
Owen: I’m sorry.
Tosh: It’s my fault.
Owen: No. No no, it isn’t. No, it is not. Don’t you dare go there, Tosh. I’m really sorry. What’s gonna happen to me, Tosh?
Tosh: I can’t.
Owen: Please, okay. I need to know.
Tosh: The containment chamber will be flooded with the irradiated coolant.
Owen: Ah. My body will slowly decompose as I watch.
Tosh: I should’ve been able to stop it.
Owen: Shh. Come on, Tosh. There’s no way you could’ve anticipated that power spike. Come on. Besides, you’ve saved my back so many times in the past. Right from the moment I joined.
Tosh: Your second week. I had to cover for you—pretend I was a medic—because you were hung over and unreachable.
Owen: What was it? Space Pig?
Tosh: Space Pig.
Owen: Yeah. We never did get that date, did we? You and me. We sort of, uh, missed each other. It was my fault. I didn’t… didn’t notice until it was too late. I’m sorry.
Tosh: Me too.
Owen: It’s starting.
Tosh: Owen—
Owen: It’s alright. Really, Tosh. It’s alright.
Tosh: Oh god. Owen. to herself Owen.

Jack: Toshiko? Toshiko! Gwen I need help down here.
Ianto: The nuclear plant at Turnhill. Owen’s there.
Tosh: He was sealed in. We averted the blast. Couldn’t save him.
Gwen: Tosh. Here you go Tosh. Talk to me now, okay? Tosh?

Tosh’s prerecorded message: Okay. So. If you’re seeing this I guess it means I’m, well, dead. Hope it was impressive, Not crossing the road or an incident with a toaster. I just wanted to say, it’s okay. It really is. Jack, you saved me. You showed me all the wonders of the universe and all those possibilities. And I wouldn’t have missed it for the world. Thank you. And Owen. You never knew. I love you. All of you. And… I hope I did good.